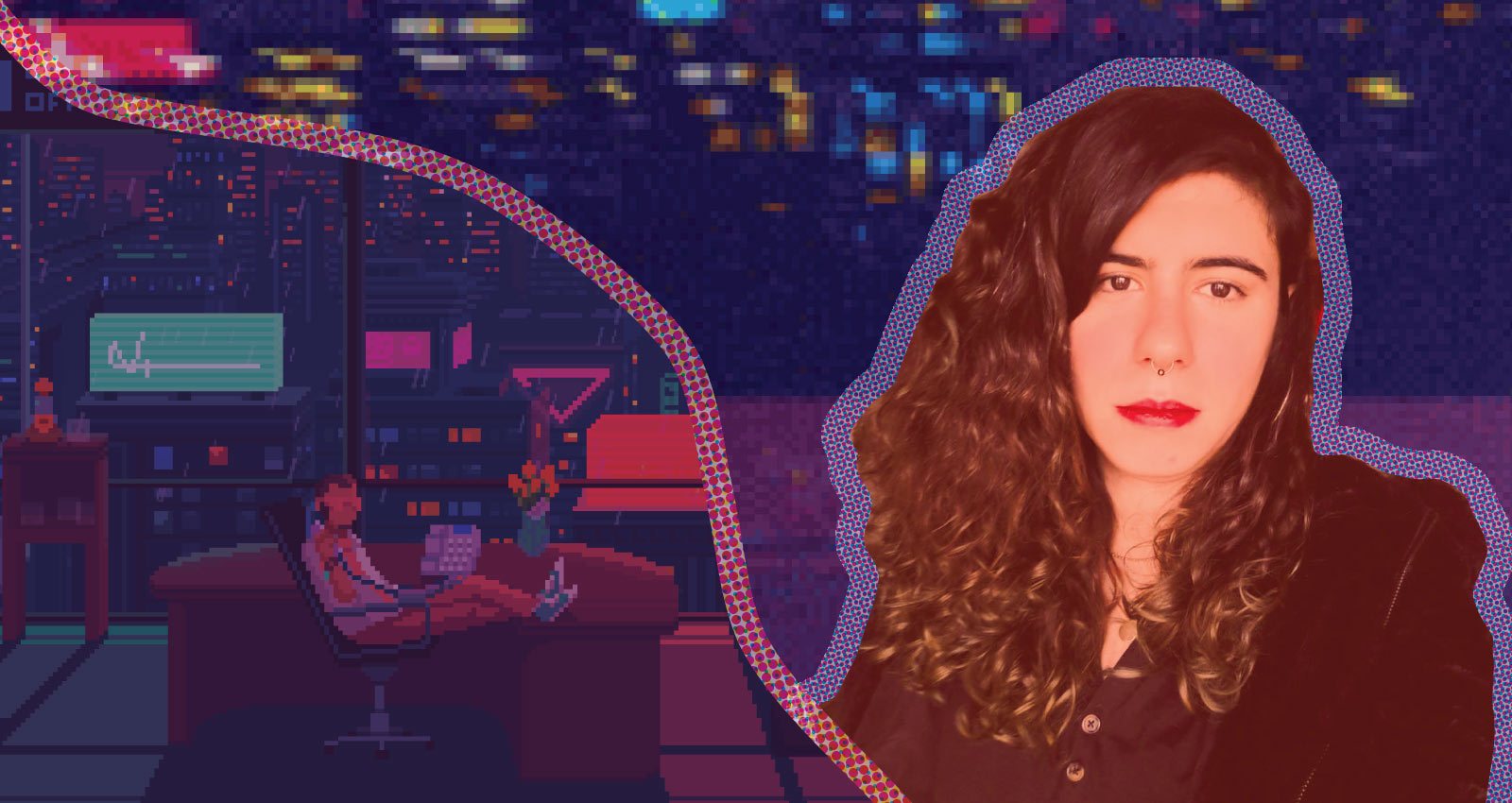 The pioneering Spanish video game developer Deconstructeam are responsible for some of the most inventive indie games of the last seven years. Titles like The Red Strings Club and Gods Will Be Watching all have glorious pixel art, compelling writing with a deeply philosophical bent, and of course, Paula Ruiz’s stunning soundscapes. These games are so polished that it’s kind of hard to believe they were cooked up by just three people: Ruiz, designer Jordi de Paco and lead artist Marina González, the three of whom share an apartment in Valencia.

While Deconstructeam’s games are strange, nuanced worlds unto themselves, Ruiz’s soundtracks—released under her musical nom de plume, Fingerspit—are singularly approachable stand-alone experiences for players and non-gamers alike. The Red Strings Club soundtrack is a powerful electronic music collection with equally ambitious ambient, industrial, and classical sides. The newly released Atticus VII, a gentle and otherworldly soundtrack for a long-canceled Deconstructeam sci-fi game of the same name, may just be even more impressive, recalling Vangelis’s iconic Blade Runner soundtrack and Aphex Twin. But what sets Fingerspit’s music apart from that of many of her peers is an ever-present emotional depth that makes the music particularly difficult to keep in the background. Ruiz spoke to Bandcamp from her Valencia apartment, where she’s currently living under quarantine.

I promise I won’t make this whole interview about COVID-19, but I know that Spain has been very hard-hit lately. How are you?

Yeah, it sucks, because it’s the only thing we speak about. We’ve been saying—like, it’s like a virus, but it’s also a verbal virus. It gets in your head, and it’s the only thing you can talk about. We work at home, so it’s not really a big change for us. But it does affect your mental health—not only because everyone is talking about it, but because there are lots of infected people and lots of people dying. That worries you, of course.

Do you feel like you can continue to be creative in some way?

We’re working on a new thing, and I’ve been composing for it for some months. But it’s been really hard to concentrate on that right now. I’m stressed, I can’t really focus. But here in Spain people are doing quarantine concerts. I had never tried playing live, so I did it. It was just some jamming, improvising and stuff, and there were 150 people on Twitch watching. It was like, “Holy shit, I didn’t expect this!” I get nervous because I’m not used to playing live, but since it’s mostly improvising, it feels like a release. I can release all this stuff that’s inside of me and just flow.

Is that anything like your normal process making music for games?

It’s really different. Like on The Red Strings Club, most of the music was made for characters. So it’s like “Who is this character?” and then Jordi, the designer, might say “this character is really happy and really expressive.” He’ll give me his thoughts about a character and I’ll try to work around that. So I have loads of information, and I try to make music that suits that. People are going to be reading a lot of text, and you have to make something that gives them some insight on the scene. But when I improvise, I can just make what I really want. If I want to make something beautiful and calm, or something noisy and aggressive, I can do that.

You have really only made music for yourself and for Deconstructeam. Tell me how you got on board with them.

I was reading a game forum [website] in Spain, and there was Jordi de Paco from Deconstructeam. His games were amazing. I thought to myself, This guy is going to make it far. I sent him a message. I said “I know your games don’t have any music, so can I work with you?” So it started with fan collaborations. I sent him some music and said “Do whatever you want with it.” But then he invited me to a game jam. That was where Gods Will Be Watching was born. So we decided to try to make it a bigger game. We did a crowdfunding campaign, and that became the first official game we did, with Devolver.

I think you make radical games in many ways: unconventional and marginalized characters, lots of challenging concepts, really human dialogue. Is there a stated philosophy behind what you do as a team?

Jordi has always said that the motto for the Deconstructeam is “seeking new narrative experiences.” I think this happened because of game jams [the video game equivalent of hackathons, in which multiple developers come together to create a game over a short time period]. What I mean is that when you’re working on a game jam, you have so little time, you have to think of something really small. We never want to make something that already exists. When we make a game, we don’t think, “This will be the new big thing.” We always look back at game jams and ask “What has worked and what hasn’t? What is interesting about this little toy we made?” And you extract stuff from that experience, from a weekend of working and trying to make something new.

So tell me about Atticus VII. There’s something about a project that never came to completion that I think fascinates people, like Jodorowsky’s Dune. What was the game going to be about?

Atticus VII was going to be a mix between Faster Than Light and The Sims: a management game with a heavy narrative emphasis, and you would play as the AI of a spaceship. You didn’t control the characters, they had free will, but your objective was trying to find the vibration of the coordinates of the stars—I don’t know, it was some really weird shit! It was amazing. I made so much music, because I was really hyped about the game. And we re-designed it like eight times. Eventually it was like, this is not going to be made.

In the end, was your team just too ambitious?

We made a common mistake. Gods Will Be Watching was a success, and we were making just enough money to eat. But in the Spanish news, people were like “Deconstructeam did it!” They were turning us into a huge success that we really weren’t. So we thought we had to grow bigger. We ended up having seven or eight people with some offices. But eight months into the development of the game, we still didn’t have anything playable. Lots of writing, lots of art and lots of videos—but we didn’t have a real prototype. And we had already lost a lot of money. It was a really, really ambitious game. What we learned from that was that when it’s a small team, you can keep everything closer and you know who’s doing what. We don’t want to be managers, we want to make games.

There’s a nice comparison with bands there. I can play by myself and I really love it, because I have complete control. If I find someone I can play with, and I know we play together really nice, that’s amazing. But if you want to have a band with six people, everybody will have an opinion. That’s their right, but then you can lose the spark.

Was it heartbreaking when you officially canceled the project?

Yeah, sure. Mostly because I had made so much music, and I loved it. I made that right after Gods Will Be Watching, and I felt like Atticus VII was a huge step up in production. I was really proud of it. I have been listening to the soundtrack for years, thinking I need to release this. So I’m releasing it now!

If you could remake any game’s music—not because you don’t like the original, just because you want to take a new path with it—what would you pick and why?

Metroid Prime was the first game I played that had kind of a different soundtrack. It was really chill, like something you might hear in a waiting room. I want to make something where the music is less for characters or moods, but for places. I want to make music for landscapes. Music for other planets, different places. I’m obsessed with the feeling that music and games can give you. You hear this song in a specific scene in a Final Fantasy game, and then years later you listen to the track and you still remember those feelings. I really love that feeling—it’s something I want to create.