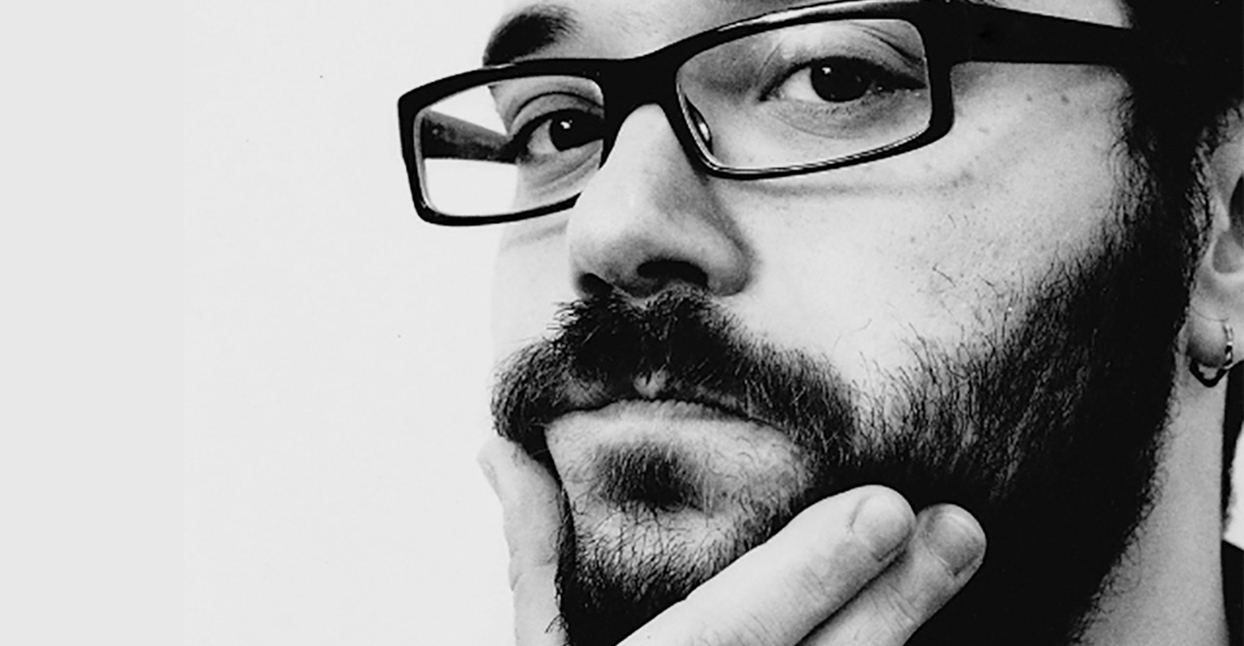 High Scores is a monthly column in which Bandcamp profiles a video game soundtrack composer. In the second installment, Casey Jarman talks to Chris Christodoulou about his prog-rock-inflected game soundtrack, Risk of Rain.

Chris Christodoulou is a Greek composer who’s accomplished a lot in the six years he’s been actively releasing music for film and video games. His highest-profile soundtracks have been for two Hopoo Games’ titles: the comedically violent stealth shooter Deadbolt and the chaotic, item-packed sci-fi shooter, Risk of Rain. Where Deadbolt’s music is funky and a little filthy, reflecting the game’s dark-and-twisted aesthetic, Risk of Rain is all complex synths and soaring prog-rock guitar licks—it sounds like no other game music in recent memory. Both game scores, though, demonstrate a high level of musicianship from Christodoulou, who seems equally adept at everything from smooth jazz to metal. We spoke about his influences, gaming, and composing music in less-than-ideal living conditions.

Can you tell me a little about the process of writing Risk of Rain? It’s such a unique game, and you made this amazing avant prog-rock soundtrack for it. What were some of your influences, and how closely were you working with the game’s developers?

It’s a very unexciting story of me sitting in a poorly-lit room that doubled—tripled?—as a bedroom, living room, and home-studio. It was rather lonely, since I played all of the instruments myself and had very few human interactions during production. That’s not a complaint, it’s just how I prefer to work. It took me about three months, then a small break to distance myself from the music, and finally some weeks of editing, mixing & mastering to complete it. It didn’t seem particularly glamorous at the time. Not to say that I didn’t enjoy it, but it was not something I was doing for fun, [I was doing it] for the very realistic goal of being able to consume food on regular intervals.

You can trace the musical roots of that soundtrack back to the bands I grew up listening to—most ubiquitous among them being Pink Floyd. I’ve also stolen from the likes of Ozric Tentacles, Dream Theater, Chroma Key, Daft Punk, Amon Tobin, and—as always—J.S. Bach.

What’s your first recollection of falling in love with game music?

Without a doubt, playing Monkey Island 2 on a SoundBlaster 16. I must have been 13, and Monkey Island 2 blew me away with its seamless musical transitions between scenes. I noticed how the music would develop and morph into different instrumentation depending on the place you visited, without interrupting playback (I later found out this was Michael Land & Peter McConnell’s iMuse system at work). As trivial as it may seem by today’s standards, this was a revelation for me. I knew you could have great music in a game, but this elevated it to a whole new level!

You’ve done a handful of game soundtracks now. Do you consider yourself a gamer? Is this a field that you entered in an intentional way?

A resounding ‘yes’ to both. My first gaming was done on a ZX Spectrum in the late ’80s, and I’ve been playing games ever since. I didn’t accidentally walk into game music—it was exactly what I wanted to do, and it took a lot of effort to get there. Most people know me from Risk of Rain, but that’s not my first game gig. It took a few soundtracks that no one has ever heard of and literally hundreds of emails—mostly unanswered—to eventually get here.

Did you know from the start that you were going to release Risk of Rain as a soundtrack? Were there logistical challenges in making that happen?

Indeed! I had done this with my previous soundtracks, and it was something I mentioned to the developers early on. They were perfectly fine with it. Dealing with an indie team of just two people making their first game was easy. There were no legal labyrinths to navigate. Our contract included this in naively simple terms, and the rest was just a matter of adding my name to the cover art, uploading the music on Bandcamp and hitting the “publish” button. Simple as that! Although, if people knew how many different versions and remasters of tracks that I’ve silently uploaded to Risk of Rain alone, they would freak out. Let’s hope this finally spawns a sub-reddit tracking those changes.

Speaking of tracking changes—one really cool thing you did with Risk of Rain was release a separate album of bits and pieces for remixers and musicians so they could get creative themselves. What gave you that idea, and what has come of it?

Yes, I put out the Engineer Edition, in which I exported instrument groups (drums, basses, synths, etc.) separately, for people who want to dissect and/or remix the music. I also prepared sheet music, including cross-reference of themes between tracks and other ultra-geeky details. It’s a rather niche release—the original soundtrack has outsold it by about 25:1—but I’m happy it’s out there. The idea came from the fans. I’ve had several requests for sheet music, and the commentary that came with the album was received very positively; people seemed to want to learn more about the music.

It’s hard to quantify the results. I know there are a few bands who have performed pieces live. For me, this alone justifies the effort it took to put it out there. Some remixes have been done, but not too many (at least not too many that I’ve heard of). But once in awhile I hear a remix that takes the material to a completely different place, combining elements from all over the album. To me, those are the really fun ones. Pieces that are not just a slightly different version of a piece I already know, but something completely new and original.

The original Risk of Rain soundtrack has been a big success, and it’s among the best-selling game soundtracks on Bandcamp. Did you have any idea that could happen?

I am very proud of the music, but not in my wildest dreams could I predict that it would be received so well. There are still people discovering it after all this time, and I’m both grateful for that and humbled by it.

Do you know who your audience is—what the average Chris Christodoulou fan is like?

I have a vague idea, but it’s not something I spend too much time thinking about. I try to make music that I enjoy, keep it honest and original. I can only hope that others will appreciate it. The one stat that I would love to see change is the underwhelming minority of female listeners, but I realize this is an issue of the medium my music is tied to. Basically, it’s not the Risk of Rain or Deadbolt audience that is an extension of mine, but the other way around. I mostly write for games so my average listeners are mostly gamers, whatever that means.

You’re soundtracking indie games in sort of a golden era for the medium. How does that feel?

It feels very exciting! I can only imagine the true Renaissance we would see if major game publications started talking critically about game music. Unfortunately, most reviews don’t include a single sentence about a game’s music, and it’s something that most of the time is taken for granted. Despite the artistry of contemporary indie game music, a large majority of gamers are still not aware that game soundtracks are usually available as stand-alone albums. We rely to the few specialized websites and some independent writers for thoughtful game music writing. Given the whole golden era thing, this can be disappointing. It makes me really happy that Bandcamp is showcasing indie game music.

Are there other game music composers who inspire you?

Indeed there are! Peter McConnell, Austin Wintory, Disasterpiece and Tomáš Dvořák are only a few among them. Benny Oschmann’s orchestrating chops make me feel like a beginner! These people are consistently producing high quality work, and they provide me with motivation to keep doing what I’m doing and further develop my skills.

Do you see game soundtracks as a genre? Is there a common thread that holds them all together?

Thank Bach, no! That is something that only makes sense from a marketing standpoint and—as I said—I’m not a marketing guy. It sounds to me that the higher the budget of a game, the more homogenized the music is. In other words, the more non-musicians involved in how a game sounds, the more down the beaten path they will likely take it, which is very sad. Thankfully indie soundtracks are literally as varied as there are game composers. I’ve often heard game music that defies categorization, and I find such soundtracks much more interesting and memorable.

You’re the only game musician I’ve talked to from Greece, but I have interviewed people from London, Toronto, San Francisco, New York City, and Ireland. Is there something uniquely international about games and game soundtracks?

I think this has to do with the geeky nature of game making. We are accustomed to working online or remotely, and we don’t see this as a handicap—in fact, it often falls in the ‘pros’ column. I guess we are truly internationalists: it’s not that we thrive for diversity, it’s just that borders are simply not an issue for us in the first place. Working with anyone, from anywhere, makes no difference at all.

If you could compose a new soundtrack from scratch for any existing game, what game would you choose?

It’s a catch-22. I wouldn’t want to change the music of a game I loved, since music was probably one of the reasons I loved it in the first place. That said, a game that comes to mind is The Talos Principle. The music in it is brilliant, both functionally and musically, but I enjoyed that game so much that I’d love to have been even the tiniest cog in its machine. Or, should I say, the tiniest cell in its brain.

Are you working on anything new?

Yes! I recorded the music for a new game called Blubber Busters, which is on Kickstarter now. It was made by some of the people who worked on Risk of Rain, among other games. It won’t be retro-stylized: The guys have done an amazing job with hand-drawn art, as you can see for yourself! The music for it will be a bit like Risk of Rain, but without the ’70s vibe. Still lots of ambiance, but pretty fast-paced and more modern, often blending acoustic instruments with the electronic ones (or treating them with effects, etc.). It’s a bit hard to explain. The game takes place inside the guts of space whales, so that’s the reason for having lots of acoustic stuff—to give it a more visceral feeling. But it’s still sci-fi, hence the electronic instrumentation!