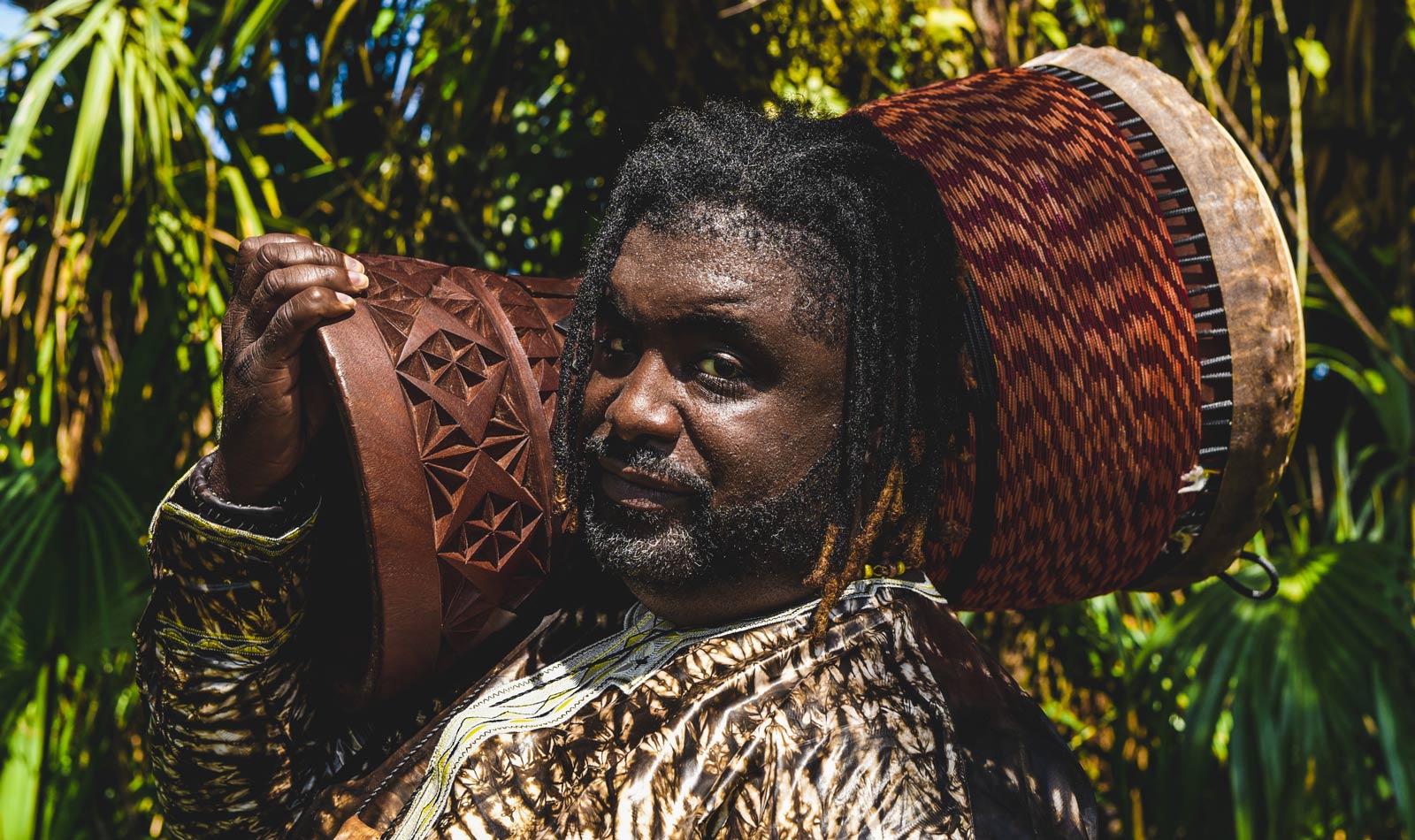 Weedie Braimah is a djembefola—a master of the djembe, a West African drum with a hollow wood body and an animal skin stretched and fastened over the top, the origins of which date back to the 12th Century. Braimah, who was born in Ghana and raised in East St. Louis, is the product of a family whose musical history goes back centuries. His father, Oscar Sulley Braimah, was a master drummer and composer whose Uhuru Dance Band made remarkable records that bridged the gap between jazz and traditional African music. Braimah’s mother, Ann Morris was a gifted jazz drummer, and his great-uncle Idris Muhammad played with everyone from Grant Green and Horace Silver to Pharoah Sanders and Roberta Flack, while also leading his own ensembles.

Braimah’s latest album The Hands Of Time puts the interconnectedness of African diasporic music into practice. Featuring a variety of collaborators from around the world, compositions like “Full Circle,” “Express Train to Bamako,” and “Send for Me” deftly fuse jazz with hip-hop and funk, while the sound of the djembe and the spirit of West Africa gives these modern styles a timeless pulse.

We spoke with Braimah about his family, the tradition of the djembe, and the intimate cultural kinship of people of African descent everywhere.

So, for starters, I wanted to start off and talk a little bit about family and tradition. You come from a musical family, correct?

Weedie Braimah: I come from a musical family on both sides. My father, Oscar Sulley Braimah, was a world-renowned drummer, composer, arranger, ethnomusicologist, and historian, and my mother, Ann Morris, was a world-renowned straight-ahead jazz drummer. Those two were my teachers. My mother learned to play from her father, whose name was Nathan Weedie Morris. So, I’m my grandfather’s namesake. His side of the family is from New Orleans, and my father’s side is from Ghana. So, everybody on my father’s side, all my siblings, the male siblings, are drummers. Like, 110 generations of drummers on my father’s side, and four generations of drummers on my mother’s side.

So that drumming and rhythm thing, you got it honestly.

Braimah: On both sides.

When you were younger, did you have an understanding that you were part of this larger tradition?

Braimah: Coming from a Ghanaian-American home and being a proud Ghanaian and being raised in East St. Louis, I was able to understand two different dynamics that a lot of people don’t understand. That changed my whole perspective on life and music. So, my father had this band called Bontuku. Bontuku was a band he created in Champaign-Urbana, which was about three hours outside of East St. Louis, Illinois. He had this band, which was kind of the same concept of what I’m doing now—he was doing it in the ‘60s and ‘70s. He had a hit single called “Bokum Mashie.” But what’s funny is that I was a part of that project, and my mother was on drums. He was the composer and arranger of music, and he was also a drummer in the band who played folkloric drums. A lot of musicians say to me, ‘You was the show, man. You was playing with us and with your dad, and you knew what your stance was. You knew your purpose.’ And that’s something that was really a trip—to know your purpose at a young age. I knew my purpose, because I knew I came from something.

I was listening to another interview you did, and you said that you’re not a percussionist, you’re a djembefola. Can you break that down for me?

Braimah: So, here’s the deal. Technically, in layman’s terms, I am a quote unquote percussionist. But let’s go deeper. Are you familiar with [Nigerian master drummer] Babatunde Olatunji?

Braimah: Are you familiar with Art Blakey?

Braimah: Okay, here’s the deal. There was a time when the drum wasn’t segregated. Let me say that again: There was a time when the drum wasn’t segregated. We, in this world in the West, segregated the instruments. We segregated the drums so bad that now cats be like, ‘Yeah, man I’m the drummer, and he’s the percussionist.’ With the exception of two places in America, you won’t hear that: New Orleans and D.C. And the reason why I say that is [in D.C.], you’re dealing with go-go music, and New Orleans you just deal with as a whole: The second line music, Black Indian music, the bamboula, funk itself, a rhythm called the Kalinda, you’re dealing with Congo Square, the Afro-Haitian culture that’s there—Afro-Cuban culture, Afro-Indian culture. You’re dealing with all of these folkloric and Afro-diasporic cultures inside of New Orleans, [which means] you can’t take Africa out of New Orleans if you tried.

So, all these different drummers, when they meet me now, they’ll tell me, ‘Man, you’re not a percussionist, you different—you’re a drummer!’ Now, here’s the deal: The mentality has changed when they see me play, because it comes to the point where I’m talking to them in a vernacular that they can understand. Don’t look at this instrument [the djembe] that is used to create and compose as a toy. In the West, the segregation of the instrument shows: ‘I’m on the throne and you follow me.’ In the East, the tables turn. From New Orleans to the east, the folkloric drummer or percussionist is the melody of the music, and it’s the job of the kit player to do the job of what the percussionist does in the West.

Braimah: To accompany and follow and to keep a steady pace. I’m playing traditional indigenous instruments, and I’m able to change how it’s looked at, so it can open up a new door for djembefolas, and bataleros [master players of the Yoruba Bata drum], and sabar players, and tamafolas [the tama is a Senegalese talking drum], and atumpan players, and people who have been playing because they were born into it, so they could be able to have a free mind and say, ‘I like playing jazz, I want to play djembe on the side of it. I like playing funk. I like playing bebop, but I want to play djembe in it and be a member in a band.’ Now the narrative has changed. The reason why I don’t like being called a percussionist is because you cannot use a European vernacular to define an African narrative. Impossible.

If you can, can you give me a quick crash course in the history of the djembe?

Braimah: So, there were three empires: The Ghana Empire, the Mandinka Empire, and the Songhai Empire. It was during Sundiata Keita’s legacy that the djembe became a title. The djembe is an instrument that represents a certain caste system called the Numu. The Numu are the blacksmiths. They are the keepers of the tradition of the djembe. How did the Numus get it? From the Women. They were using the mortar and pestle, and the Woman broke a hole out of the mortar and pestle and gave it to the Numu. The original name is djembe para. One of my teachers [Malian master drummer] Abdoul Doumbia tells me that the original name went from anke djé, anke bé, to djembe para, to djembe throughout the years. What does anke djé, anke bé mean? ‘Everybody come together in unity and peace.’ The djembe is an instrument of the Mandé. The Mandé live throughout West Africa. You will find Mandé people in Guinea, Guinea Bissau, Sierra Leone, Burkina Faso, The Gambia, and in the west of Niger. That ethnic group was the creators of the djembe

I’m curious about the time of transatlantic slave trade, when people were being brought over here—were our ancestors creating something similar? How did that technology of creating and playing the djembe transfer from the continent over to the Americas and the Caribbean?

Braimah: What made African music so emotional and important was the science of what was brought from West Africa to the Americas. Before we even talk about djembe, let’s talk about the ideology of what music was for enslaved Africans coming to America. It damn sure wasn’t happy music, but what gave them happiness was creating songs that were intertwined with the vernacular and emotion that was created here. That’s why, when you listen to African music, the work songs that you use in West Africa are emotionally different than the work songs that we use here in America. Because [in Africa] folks were working for food, family, community, the village, health, happiness.

No djembefolas accompanied the work songs here. The fucking instrument that accompanied the work songs here was the actual hoe. Boom-shaaa! The working of the field. Those songs were intertwined with the emotion of what happened in the moment. That’s where you got the blues. Moving forward, when you start listening to jazz, something happened in the ‘30s and ‘40s. There were some very prominent artists in America that every djembefola or every musician that’s learning African folkloric music needs to know: Asadata Dafora, Chief Bey, Issa Mae Andrews, Babatunde Olatunji, Montego Joe, Ladji Camara, Nana Dinizulu. These musicians were important in preserving African culture in the ‘40s, ‘50s, and ‘60s. The culture of African drumming and dance was just coming back to America. They were studying and going to Africa to bring back a certain important knowledge that was needed for the communities to gain understanding of self. Ladji Camara started intermingling with all the African-Americans and he started to see, ‘Yo, these muthafuckas got traditions here!’ Mind you, he had a village way of constructing the djembe. The construction of the djembe that people see today—that I play, that’s played even in Africa, in Japan, and around the world—was created by an African American in New York, Chief Bey. The rhythms and the culture was preserved in this country by the descendants of enslaved Africans who knew that they had to keep this culture alive.

What is so African about African American music? What has been retained from Africa in the music of the diaspora?

Braimah: Well, I’ma tell you, and people may think I’m crazy but: It’s the feel. We all hear these rhythms—12/8 and 6/8 and shit like that. But if I played ‘chika-chika’ [mouths a slow syncopated beat], people hear it and go ‘Oh shit!’ A lot of times, people hear these rhythms and they connect to them and they don’t know why. It’s in your DNA, and we are still a spiritual people, and whatever deals with an instrument that represents spirit, you gonna always feel it. Look at the church—that’s the most African shit. When I see muthfuckas get possessed, that’s some African shit. So it never left. You ain’t gotta play 6/8 for that. It is what it is. And that’s the connection of being an African in America. It never leaves.