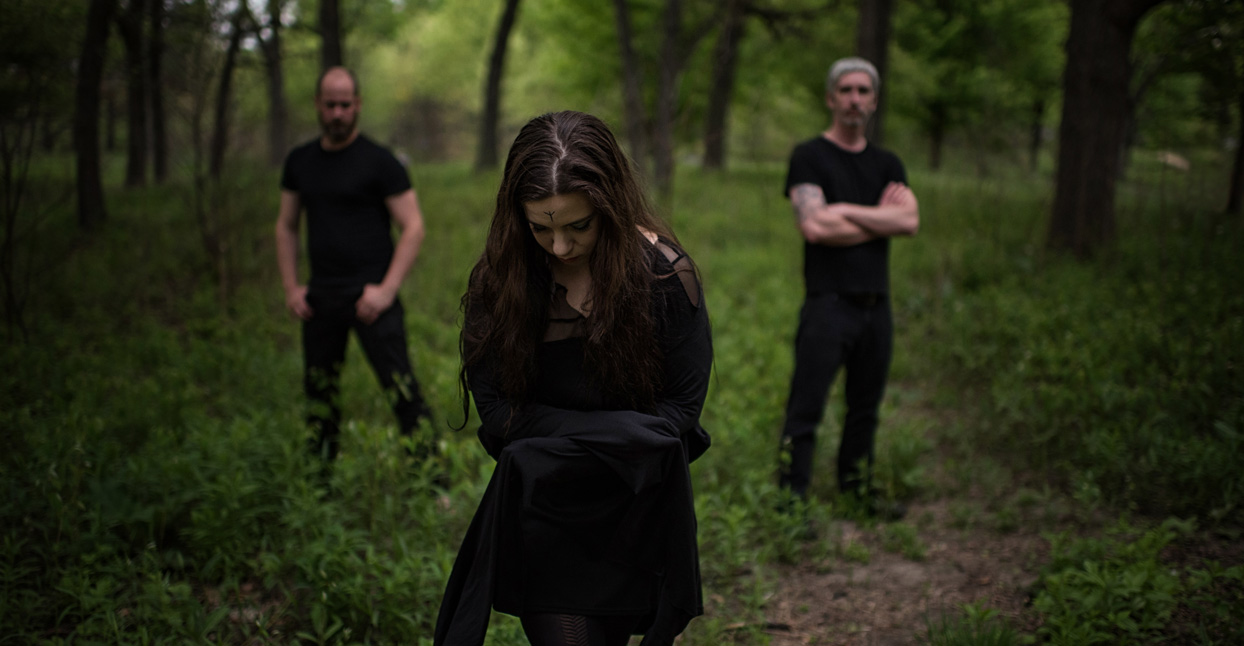 The Prophecy Fest in Balve, Germany is the world’s only metal festival held in a cave. With the exception of Bohren & der Club of Gore, all the bands on the July 2016 lineup were on Prophecy Productions, known for melodic black metal and other left-field offshoots. One of the highlights that weekend was Toronto’s Völur, who are the exact sort of group you’d want to see perform in a cave—dressed in robes with smoke billowing around them, violinist Laura Bates provided sonorous rhythms and straight-up shreds, while bassist/vocalist Lucas Gadke took Bates’s instrument from a mere background to an equal lead. (For the post-rock heads out there: their drummer is James Payment of Do Make Say Think.)

Given the venue, their performance felt a little ritualistic, highlighting metal’s eternal contrast of using technology to evoke primal wildness. While Völur resemble Sunn O))) in their getup and ability to bring elements of an over-the-top arena rock show to something less commercial and more abstract, that’s where the similarities end. Ancestors, their second record for Prophecy, is slow, but it isn’t drone—Bates surges and falls in tandem with Gadke’s death metal-influenced roar and pummel, where even the pleasant moments are tinged with turmoil. Gadke is no stranger to the intersection of classical and metal since he also plays in the flute-driven Blood Ceremony; in Völur, he takes the mantle with ideas of his own. Ancestors draws upon Germanic mythology, in particular the lives of men struggling from life after bloody war, and it’s rare to see a record with such well-worn (and sometimes controversial) sources sound so inventive.

We spoke with Bates and Gadke about how Ancestors deals with masculinity, how formal jazz education was a blessing and a curse, and what it’s like being grilled by German punks on Burzum.

Ancestors is quite a bit more aggressive than Disir. What led to that?

Laura Bates: It’s definitely more aggressive in the death metal aspects and the black metal influences, and Lucas is doing a lot of growling vocals. Disir really was a demo for us, a one-day marathon recording. With Ancestors, we were able to take our time and map it out and achieve as much dynamic contrast as we wanted. The heavy parts are heavier but the lighter are just as light, or lighter in contrast. Lucas can tell you more about the conceptual theme, but it’s a masculine record and Disir was a feminine record.

Gadke: Masculinity as a large concept is deeper than, you know, [grunts], going and getting angry, charging forward, whatever. I wanted to bring out profound sadness—not that other genders don’t experience that as well, but there’s a certain kind of energy to it that’s different.

Bates: The characters that the pieces are about are not Viking warrior types, they’re farmers—

Why is masculinity more ripe for exploration in metal?

Gadke: There was a track that we recorded that we left off because it was in excess of 22 minutes. On that, it was trying to flip the big Viking warrior on its head. There are these old poems about these battles that happened, but then there’d be stories about the men that carry on afterwards, the stress they have to deal with, these post-traumatic stress things. I was trying to write about that, this sadness and these roles that are thrust upon you maybe unfairly, maybe not unfairly, and genuinely wanting to help the people around you, but you’re cornered into only the specific ways you can help people. It’s raging at the limitations but raging at your something foisted upon you, but you’re limited by the world you live in.

‘Famine’ is where you really go at it.

Gadke: The idea [for that song] is there’s certain literature that speaks to an old Norse idea of going out and sitting on your ancestors’ grave. It was called ‘sitting out.’ You would sit there and you would have a revelation. It was sort of like a vision quest, almost. In Iceland, they’ll have these volcanic eruptions that have decimated the population. A normal person who loves their family, like any man would, what could they do—what could they do and how they experience that. Begging these spiritual forces, one of the scenes is like that, or burying your dead friends or there’s a scene where there’s a famine going on and people are killing each other over a beached whale and these insane lives people had to live.

The spirit quest comment is interesting—do you think one can meditate to Völur?

Bates: A large exercise for me in this band is being able to play repetitively and not feel like something has to change every eight bars. People who have heard this record have commented, ‘That didn’t feel 12 minutes.’ I’d like to think that it manages to transcend the way you perceive time. When you say meditate, I think of Lululemon shit. It can provide a catharsis or a refuge.

How is space important for Völur?

Gadke: Learning to leave space is a big thing. I love when we’re playing live, if we’re playing well, we can do these things where we bring it way down. Sometimes if the audience isn’t super engaged, we’ll try to bring it down and they’ll start clapping and cheering and drinking beers. If we’re on point, we can bring in the quietness and open up the space, and at the same time, the room seems to shrink because you’re doing these really quiet things and everyone’s focusing on a single movement or a single idea. It’s really wonderful. You can completely blow it up again, and make the room seem huge with these giant sounds.

Is violin as the focus a subversion of metal?

Bates: I think it’s more so a subversion of the role of the violin in music, especially rock—‘Let’s do an ambient black metal intro with some string parts,’ or whatever. But also for the bass, we wanted to switch things around and that’s also our nature, but it wasn’t like, ‘Let’s make things backwards.’ I also hit a point as a violinist of getting a little sick of overdubbing and being a guest—icing on the cake. It’s nice to be integral to something. I had a professor once who said take whatever you want to do and make yourself integral to it. Get rid of guitar players! [Laughs]

Gadke: When we first decided to expand the band, that was on the table—should we get a guitar player? We realized it would make us much more conscientious about how everything was written because whether we’ll admit it, the guitar is the perfect instrument for heavy metal. You can play high, you can play low, it fills this big space. But now going in where it’s just the three of us, anytime we have a part, we have to think what’s gonna maximize the effectiveness, and it prevents you from getting complacent about arrangements.

Is the violin particularly adaptable to metal?

Bates: Yes, but I approach the way I play violin in Völur different than anything else. I’m mangling my fingers a bit trying to voice chords that you wouldn’t do on an acoustic violin, but I don’t feel like anything’s beyond reach. I’ve been messing around with various effects pedals and pickups for over 15 years, so I kinda figured out early on what amplification to use and what effects are going to translate well with bowed strings, as opposed to picking a note. So, it is, if you do put the time in with attention to tone.

Is part of Völur unlearning certain things from your formal education?

Gadke: I wouldn’t say unlearning, I really enjoyed my time at school. Maybe some people go into music institutions and they take the stylistic things too seriously. You get taught ‘Jazz is great, the best music that was ever made was ‘70s fusion,’ or whatever. I kinda went in knowing my own aesthetic, and if you can keep an open mind, you learn different techniques and approaches to making music, it can train you to be a better musician. The only thing I really unlearned for a long time was to be fearful of your own writing. It was a big break for me, I’ve been playing in bands for a long time, but I hadn’t really written anything in years because I was worried it’s not as good as this or as good as that or who cares what I have to say. Unlearning that good enough is something that doesn’t exist, if you’re competent to pull it off.

Bates: Jazz school for me completely ripped my sense of self and self-esteem as a musician.

Bates: First day of jazz improv—I really like John Coltrane and Miles Davis, but I didn’t know that much about jazz—I went into class and I brought my little Fender tube junior amp and my Electro-Harmonix first edition delay pedal, ready to improvise. I got told that I swung like a rusty gate, [I got told] I couldn’t process flat keys because I’d grown up primarily playing classical music, which is generally in sharp keys which are more violin-friendly. I was just in trauma.

Has this been a more freeing experience?

Gadke: I spent a lot of time teasing things out of you. On ‘[Breaker of] Skulls’ I wanted you to solo for a really long time.

Bates: It’s hard to build a solo for that long!

After Prophecy Fest, I remember you guys were playing a squat somewhere else in Germany. What was that like?

Gadke: It was a bizarre experience. We were told there were going to be amps there. There was a lot of difficulty getting the equipment. They were an Antifa space, which we were cool with.

Bates: When we got there, this guy who runs the venue, he sorta pulled me aside and he wanted to ask me what black metal I listened to and he wanted to really clarify that I don’t listen to any Burzum. I’ve never experienced that at a show in Canada.

Gadke: It was a good show, and I think I programmed it this way because we went over to Germany to play the Prophecy Festival. We played this cave and it was wonderful, and I felt like I had to do something where we stay grounded.

Since you use Germanic themes—some of which less-savory bands also use—are you worried you’ll be misinterpreted?

Gadke: I was, and then I decided a little while ago those guys don’t get to decide what those things mean. The symbols and stories are older than them and they’ve been around for way longer. There’s a huge body of scholarship that’s associated with it that’s completely apolitical or sympathetic to more modern, liberal thought, or at least peaceful thought. It’s a culture that existed a thousand years ago and therefore doesn’t have much to do with modern political climates. I don’t see how people can read those old stories and form that kind of ideology, this far-right, hateful ideology. NSBM [bands] don’t have a monopoly on Thor and Odin and the Saga characters—it’s bigger than them. The rune symbol we use has been co-opted by right-wing groups in Europe, but at the end of the day, it’s a letter that was used at one point [in a neutral context, as part of a written language]. These guys don’t get to decide what it means.