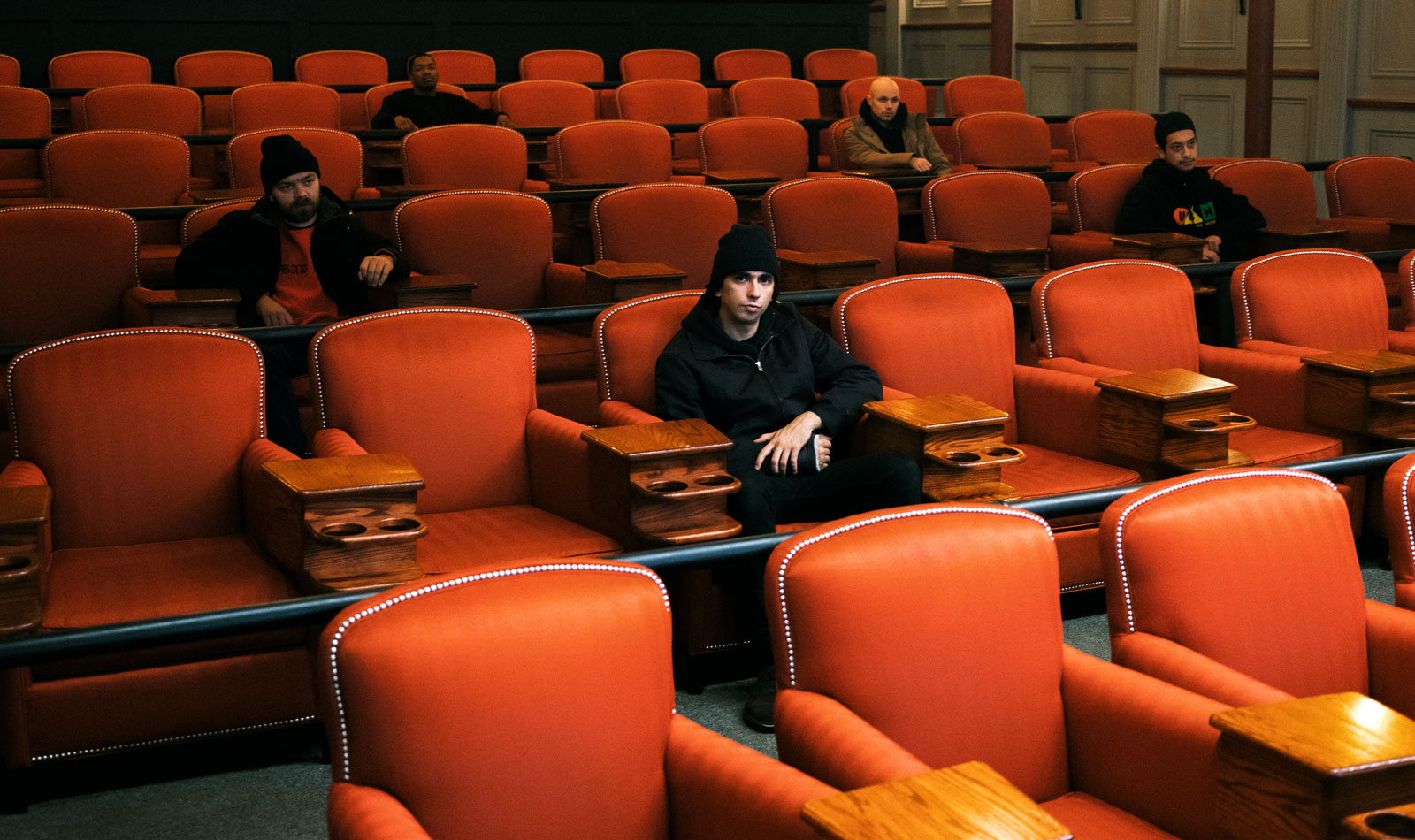 In many ways, solitude can be a double-edged sword. As Anthony DiDio, vocalist for Boston metalcore bruisers Vein.fm, says: “Being alone, or even just being at home, whether literally or figuratively, can be more expansive than the outside world around you.” There’s an intensity of perception that coincides with extended periods of isolation, a state of awareness and hyper-vigilance that can—under the right conditions—lead to despair and delirium. Or, as DiDio puts it: “Because of how much shit you can discover about yourself, and discover in your mind, that can be one of the scariest places of all time.”

This livewire energy translated effectively to 2018’s errorzone, where Vein.fm’s innovative metalcore sound fused with nu-metal, post-hardcore, and other eclectic influences alongside DiDio’s lyrical exploration of digital space and automation. “We had a lot more house and drum & bass elements,” DiDio says of the band’s acclaimed debut LP. “It was a lot brighter, higher energy, futuristic. This time around, it’s a bit more gross.”

On This World Is Going To Ruin You, their sophomore studio album for Closed Casket Activities/Nuclear Blast Records, Vein.fm twist the record’s guiding motif into something intimate, perverse, and incisive. If their debut album was the group’s Terminator—sleek, mechanistic, and ruthlessly efficient—then its follow-up is a Freddy Krueger fever dream, thrashing, blood-soaked, and irrevocably haunted.

“We did have a plan and there was a vibe; there was a mood in mind,” DiDio explains. “We were tapping into a lot of different types of sounds, with instruments and sample choices that add to the palette of the whole thing. But also, I think a lot of these things were just, very naturally, a reflection of how we felt.” To bring the record to life, Vein.fm switched out the closeness of Massachusetts for Belleville, New Jersey and Graphic Nature Audio, reuniting with Grammy-winning producer Will Putney (Knocked Loose, Every Time I Die) in April 2020, just as world ground to a halt. More than anything though, DiDio declares, the intentional thrust of This World Is Going To Ruin You isn’t related to the pandemic—it’s an experiential journey punctuated by sensory overload. “It’s a personal record and I want people to just enjoy it like they would with a really intense movie or a psychedelic trip.”

Yet, for all their sonic extremity, it’s clear that Vein.fm place just as much emphasis on paratextual elements beyond the purely aural. Conceived with friend and illustrator Autumn Morgan (Code Orange), the artwork and typography for This World Is Going To Ruin You reaffirms the band’s holistic approach to aesthetics, enticing potential listeners with a curious glimpse at the horrors lurking within. In contrast to the gory surgical close-up that adorned errorzone, the record’s evocative cover offers up a visceral collage of disjointed images, where flesh, flames, buildings, and landscapes collide in violent proximity. “When you look at it, it feels like you’re about to enter that house or enter the universe that it’s coming from,” says DiDio. “It looks crazy, like a movie poster or something. It’s like there’s another dimension bursting out of it.”

Despite looking like a promotional still from The Cabin in the Woods, this gesture towards the cinematic isn’t just restricted to the album’s artwork and packaging. The Max Moore-directed music video for devastating lead single “The Killing Womb” features a miniature house under siege and a bloody decapitation worthy of Hereditary. While long-time collaborator Eric Richter’s video for “Wavery” channels the surreal, hypnagogic contours of the mind, drenching the band in sepia tones and shadows that evoke the cosmic existentialism of The Fountain (2006). When asked what exactly waits inside for listeners brave enough to cross this dimensional threshold, DiDio doesn’t pull any punches. “A weird, nostalgic nightmare. It’s nostalgic in the ugliest way possible. Nostalgia and a lot of trauma—that’s what it sounds like.”

Nostalgia is a curious thing. In today’s globalized world, it’s the dominant mode of cultural production; a melancholic yearning for a specific place and time found in everything from music to television and film. Is this the project Vein.fm had in mind all along? A rush of sentimental escapism and a hard-hitting return to the familiar? “I think nostalgia is great,” explains DiDio. “But I also think a lot of the time, people use nostalgia in a really pornographic way, and they don’t actually like to bring out any types of feelings that they should, so it becomes more of some dumb throwback thing.”

By eschewing familiarity for the weird and the eerie, Vein.fm ensure that This Is World Is Going To Ruin You is more concerned with utilizing domestic rupture as pointed anti-nostalgia, manifested in a collection of unnerving sounds and sensations that don’t belong. “It’s almost like a nostalgia for something you haven’t experienced yet,” says DiDio. “This really dark, really dreamlike, nightmarish type of feeling where something just doesn’t make any fucking sense.”