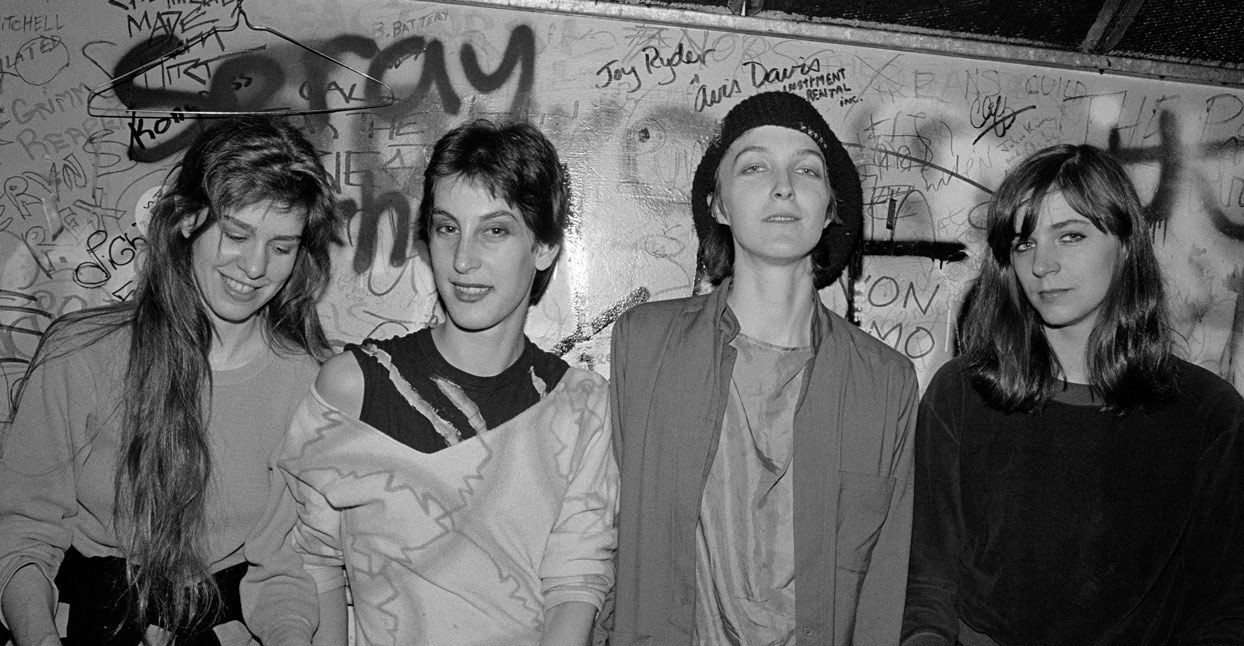 Photo at CBGB's by Mark Brady

In the annals of post-punk, few movements were as musically heterogeneous as no wave. The bands who emerged during the late ‘70s in the desolate lower regions of New York City had a lot in common, but no two sounded alike. Just look at the movement’s most famous document, the Brian Eno-produced compilation No New York. Sounds don’t get much more disparate than the post-VU deconstructions of Mars, the halting screech of DNA, the jazz-funk sprints of Contortions, and the harsh howls of Teenage Jesus and the Jerks.

Because of this sonic diversity, it’s hard to say which no wave band was most unique, but Ut—the trio of Sally Young, Jacqui Ham, and Nina Canal—have a convincing case. Though they were influenced by their cohort, their working method was one of a kind. “We were on our own wavelength because we had a radical approach to our roles within the band,” says Young. “We all wanted to sing, write, and direct songs, as well as play all the instruments. No one else was doing that as an integral part of their music in the way we were.”

“We all shared this sense of making up our own rules and taking things to their essence,” adds Ham. “We thought of it like a [repertory] theatre, and we all wrote the plays and took different parts.”

Sadly, one thing Ut did have in common with their peers was a lack of releases. Most no wave bands had sparse discographies, but Ut never even managed one record while in New York. A planned 1980 single on the Lust/Unlust label fell through when owner Charles Ball went missing, and shortly thereafter Ut moved to London. Things changed there, as the trio subsequently generated a string of excellent EPs and albums until their 1990 breakup. They reunited in 2010, and since late 2017 have gradually reissued their discography on Bandcamp.

Their latest addition is the 1985 full-length Conviction, originally released on Ut’s own label, Out. It was made at Cold Storage, the meat-locker-turned-studio where British experimental legends This Heat rehearsed and recorded, and produced in part by Tim Hodgkinson of avant-rock pioneers Henry Cow. “We did it in ‘deadtime’—usually late at night when no one else was using studio,” says Ham. “This Heat were broken up, but Cold Storage still was as it had been: a great big room to play in with a lot of their stuff around.”

Conviction might be Ut’s most varied, resonant record. Every track has a singular angle, but they all share a dark, nervy vibe. Chilly, brittle guitars mesh with nervy vocals to evoke urgent desolation and steely resolve. The album’s eerie, metallic tone is akin to Sonic Youth records of the same period such as Bad Moon Rising and EVOL. But in Ut’s case, the creepy aura is leavened by exuberant performances. “I think we were all in a pretty good place when we did Conviction,” says Young. “There was a wonderful spirit of exploration and experimentation that emerged between all of us that is really apparent in the recordings and mixes.”

That spirit is something Ut felt from the very beginning. Young and Ham first wrote songs together as high schoolers, and continued after they moved together into a New York apartment in 1978. “There was so much artistic creativity happening in music, art and film in NYC in the mid to late 1970s and early 80s,” recalls Young. “The East Village was a thriving colony of artists of all kinds and you could walk down any street in the area most days and run into others and end up having stimulating conversations on the street or in some local cafe.”

Such conversations led to composer Peter Gordon’s suggestion that Young and Ham play music with Canal, a former member of no wave band the Gynecologists alongside future guitar-orchestra innovator Rhys Chatham. “We were all excited after the very first session [at Gordon’s loft in October of 1978] by how similar our approach to making music was and how easy it was to play together,” recalls Young. “We immediately made music that gelled and interlocked and we felt inspired and transported by.”

They settled on the name Ut after finding it in a dictionary defined as “do.” “I think the three of us shared a radical drift, and an attraction for fierce electric guitar music and improvisation came naturally to us,” says Ham. “So the chemistry was immediate, and we had a great interplay.”

That chemistry is apparent on Early Live Life, which consists mostly of NYC concert recordings from the band’s first three years. (The record actually didn’t come out until 1987). But the trio’s infatuation with New York dried up not long after those shows, toward the middle of 1981. “NYC was a ghetto for our scene and we felt limited,” says Ham. “There were only a few clubs and independent labels, practically no press, and most of America was a blind wasteland entrenched by big business.”

Looking for opportunities beyond the U.S., Ham passed an Ut tape to Scott Piering, a tour manager for The Fall, and the music made a quick impression on bandleader Mark E. Smith. “He offered us support slots with The Fall if we came to the U.K.,” says Young. “At the same time, John Loder of Southern Records suggested us recording an album with him in London.”

“We had no romance about London,” says Ham. “But the independent music business scene was years ahead of America, and an experimental band could thrive.”

Ut did indeed thrive in the U.K., first visiting in the late summer of 1981 and eventually making it their permanent base. Their first release there, a tape called Live at the Venue, came from a November show in London (it’s now available as an LP as well as on a joint CD with Early Live Life). Over the next decade they were consistently active, recording two EPs—Ut and Confidential—before making Conviction, and finishing with late ’80s albums In Gut’s House and Griller, both of which will arrive on Bandcamp later this year.

Throughout that body of work, the group continually challenged themselves while maintaining the spark that lit them from the start. “Exploring the new and pushing against limitations came naturally to us,” says Ham. “We were creating the sounds in our heads and what came about automatically between us. So the music itself pushed us further then we might have imagined. We would go through [enthusiastic periods] for certain kinds of sound fields, we would have seasons of tight structures and seasons of epics. We liked the interplay between discordant things, the hard and soft, the lush and spiky, the friction between sounds and styles.”

Such enthusiasm has reignited since Ut began playing shows again earlier this decade. Their activity has been sparse, since Canal lives in California while Ham and Young are still in England, but revisiting their past work has added new inspiration. “Experiencing the music again has been fantastic,” the band collectively write via email. “When we come back to listen we are struck by how Ut’s music is so powerful and unique. It’s so interesting, strong and transporting! These early records have essential songs that are really inspiring to us.”

“We have each been an enormous musical influence, for the good, on each other,” they continue. “We shaped Ut and Ut shaped us. It is impossible to untangle the wild experiment of Ut from ourselves. It has shaped us all immensely, more than we can fathom.”