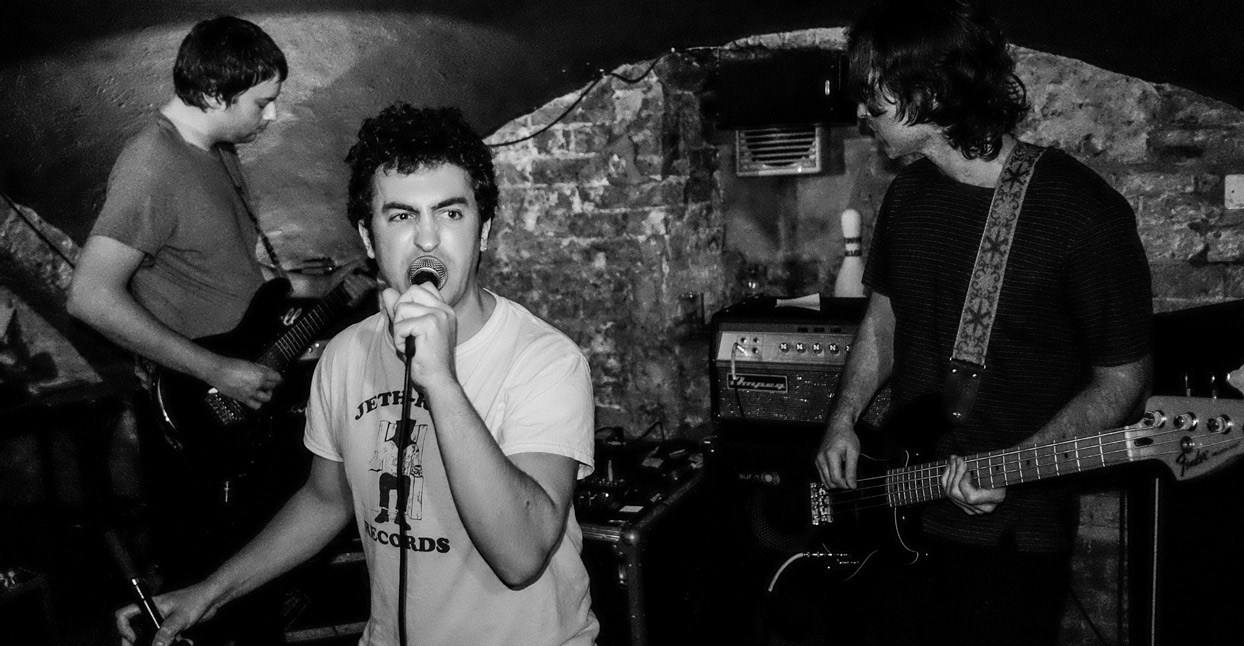 “When the lights cut, my adrenaline went through the roof,” says Jackie Jackieboy, of transcontinental punk duo Urochromes. “I was terrified. There was no way to prepare for that kind of darkness.”

Preparation for Urochromes’ debut LP Trope House was intense, to say the least. Much of the album resulted from a 26-day sleep study both members participated in—the experience Jackieboy is referring to. For legal reasons, they can’t disclose the name of the participating Massachusetts hospital, but they could say that the study “was investigating impacts of sleep deprivation, and received funding from NASA.” It’s a bizarre backstory, especially when it’s the backbone for a record as concise and amusing as Trope House.

Urochromes began releasing music in 2015, while Jackieboy and Dick Riddick were living in Western Massachusetts, cobbling together a band using a drum machine, guitar, and vocals—their first material was a 7-inch on Lumpy Records. Trope House marks the duo’s first studio full-length, and was recorded in the spring of 2018 between New Orleans and Mobile, Alabama by Gary Wrong, of the Gary Wrong Group. The swagger of the American south is evident throughout the record, especially on downtempo amblers like “Rumshpringa.”

With all that attitude, it’s perhaps surprising that Trope House came out of near-psychedelic asceticism. “I wouldn’t want to be too overdramatic, but there is some major ego death that happens at some point,” Jackieboy says of the sleep study, noting the only things to look at were a clinical, bright fluorescent light and a cleaning station. “There were some hallucinatory moments, especially coupled with extreme sleep deprivation. I felt like I had some unsolicited visitors. There was this dispenser of hand sanitizer in the wall, and at some point I had to accept that I was fully seeing this older man’s face in the gel. He stuck around for a while, and I had to accept that.”

But when the options were to fixate on objects in a 10-foot by 10-foot room or get to work, Jackieboy got to work, physical comfort a distant memory. “Most times you have wires connected to you going into holes in the room,” he says. “You feel attached to the room. That said, apparently it’s possible to get a lot done, despite having electrodes planted on [your] head, IVs in your arm, and a tube two feet up the rectum.” He couldn’t bring in any technology that marked time, but musical gear and media were okay. In addition to writing lyrics, Jackieboy made music with the drum machine and keyboards he brought, locking it into a four-track recorder.

Riddick took part in the same study simultaneously, though in a different room, creating music on his own as well. Jackieboy does all the drum programming and most lyrics, but Riddick writes the majority of the guitar and melodies. The fruits of this one study were enough for multiple records, but sifting through all those ideas resulted in Trope House—at least, the majority of it. There was a bit of a surprise towards the end; Riddick decided they were going to record a cover. “We were struggling to get to our 20-minute mark of music for the record,” Jackieboy says, “and in this really deadpan voice one morning Riddick said he wanted to do a dub cover of a Bikini Kill song. I was like, ‘Man, I wish I wasn’t here right now.’” It ended up being one of Jackieboy’s favorite songs on the record—“Resist Psychic Death,” touchingly sung by Gary Wrong’s daughter.

Notwithstanding the physical deprivation and extremity required to make it, Trope House is a cohesive rush of fun—“fun” is a key word for Urochromes. “We want to make music genuinely fun to listen to,” Jackieboy explains. “I think the Bikini Kill cover has, for me, reached that more than anything I’ve recorded.” Hearing the young girl’s voice crest atop drum machine and guitar is a jarring moment, but one that also produces a smile. It’s no surprise that spreading enjoyment is implicit in their work—especially on Trope House, from the outset, with songs like the headbanging-friendly “Milieux” or the punk bulldozer “Trapped On Planet.” In the meantime, while listeners are enjoying the album, Jackieboy’s considering a 40-day sleep study—the psychological effects of such a long period of isolation on one side of the fulcrum, transcendental sleep and creative productivity on the other.