“It’s a love song, but it’s about killing an immortal Nazi witch… so, I don’t know.”

Gareth “Gaz” Liddiard is sketching out a broad roadmap to “Maria 63,” the closing song on Tropical Fuck Storm’s sophomore album Braindrops. The “Maria” in question is Maria Orsic, an immortal Nazi witch who communicated with aliens via telepathy and was absolutely, positively real—at least to some far-right conspiracy circles. “She got plans for space propulsions engines from aliens telepathically, and she gave them to Hitler,” he says over the phone from his home in Victoria. “In the end, she was spirited away to Aldebaran, a planet a few light years away.”

On “Maria 63,” things turn out a bit differently: In disguise as her own daughter, Orsic flees to Argentina with the rest of the disgraced Nazis, and spends her years in exile until she’s assassinated by a Mossad agent posing as an interviewer; the violent conclusion is contrasted with repeated allusions to “Ave Maria,” that universal signifier for purity and devotion. It all adds up to what Liddiard declares, with pride, “the most convoluted love song in history.”

This devious sort of mindfuckery lays at the heart of Tropical Fuck Storm (or TFS for short), the psych-rock project Liddiard co-founded alongside his partner Fiona Kitschin in 2017 after their old beloved band, the chameleonic art-rock outfit the Drones, went on hiatus. With drummer Lauren Hammel (of Collingwood extreme-metal outfit High Tension) and guitarist Erica Dunn (who also slings riffs for the indie-punk outfits Palm Springs and Mod Con) in the ranks, Tropical Fuck Storm technically qualify as a supergroup. To that end, elements of their collective back catalog crop up on both Braindrops and its 2018’s predecessor, A Laughing Death In Meatspace: Hammel’s militant drumming, Dunn’s bristling, post-punk-inflected fretwork, Liddiard’s sardonic drawl, Kitschin’s piercing alto. But TFS’ was a chimera incubated in the dystopia of the here and now: a group reaction to all the environmental destruction (a subject Liddiard and Kitschin are very familiar with as survivors of the 2017-2018 brush-fire season, the worst in Australia’s history), inept bureaucrats, and fascist insurgencies plaguing the globe. 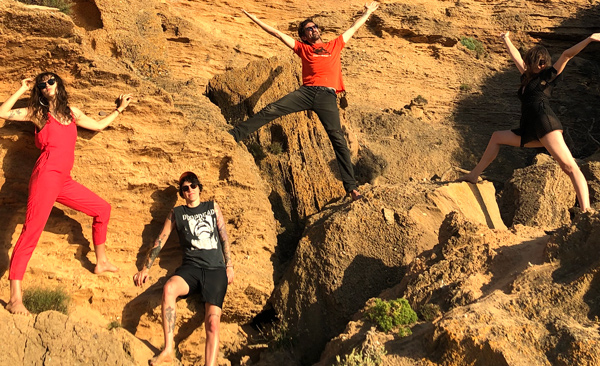 “The first album is more political crap going on, more didactic shit,” he explains. “With this, I wanted to make an apolitical album—which is impossible. I structured most of the songs about being love songs. Whether they’re reliable or unreliable as a narrator, I don’t know. In the end, they end up being political and weird.”

That so many of their romps center around obscure conspiracy theories (consider the aformenetioned “Maria 63,” or A Laughing Death In Meatspace’s “Shellfish Toxin,” which is all about how the CIA gave fighter pilots decoy coins laced with a lethal shellfish toxin so that they could commit suicide if they were captured—allegedly) only buttresses their thesis further: in a post-internet, post-truth world, who’s to say what’s real and what isn’t?

“I find there’s a parallel with dadaism,” Liddiard explains. “That was all between the wars back in the early 20th century, and shit at that time was getting really ridiculous. The real world was so outrageously crazy, so satirizing it didn’t work. How can you parody Hitler? How can you parody Donald Trump? You can’t out-stupid stupid. Now we’re back at the same juncture, I guess, so it’s more of a dada thing. Instead of pointing out something going wrong, you just ape the shit out of it. We’re just dealing with the weird and ridiculous.”