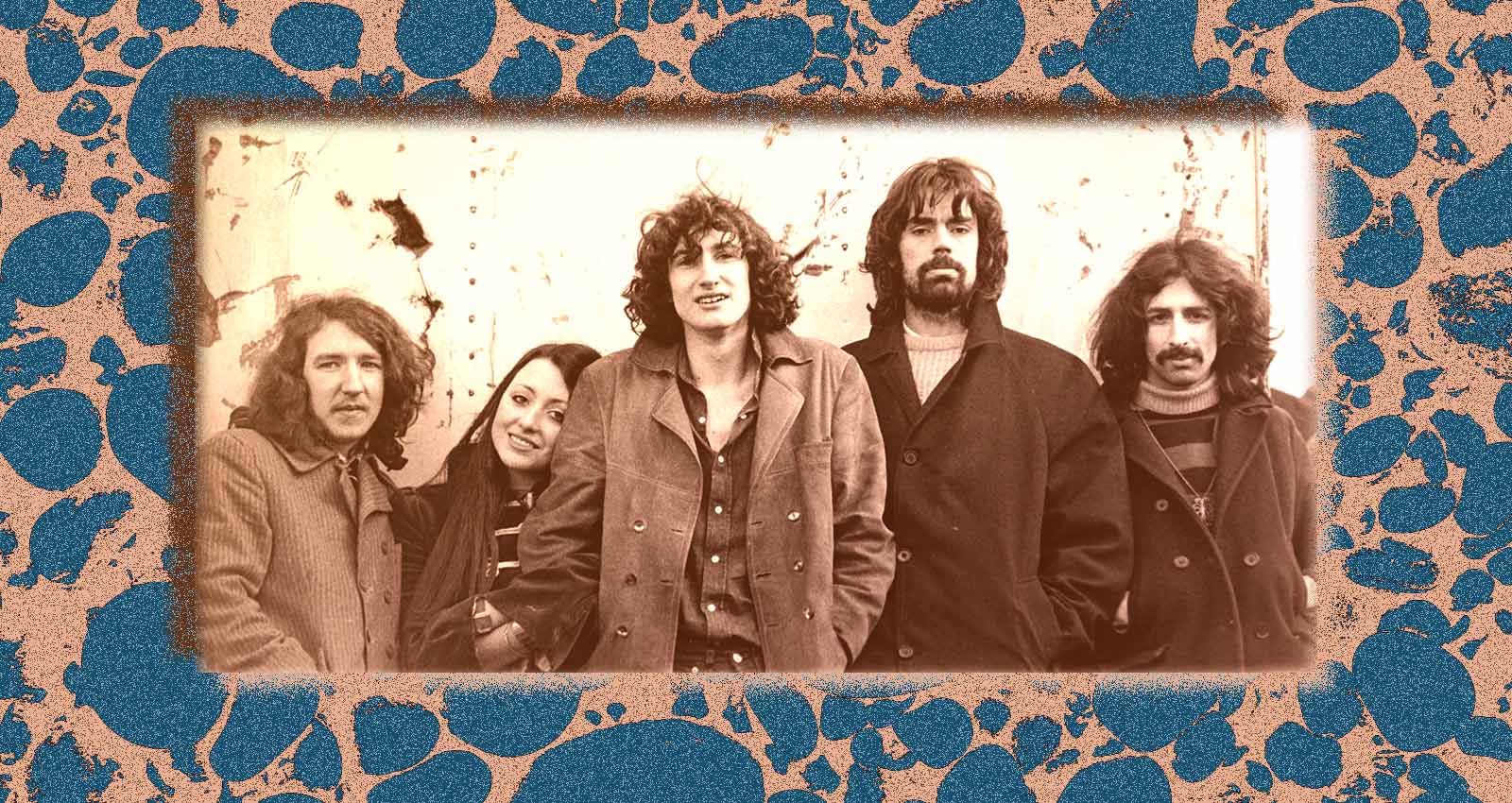 David Costa’s home sits almost equidistant between Stonehenge and Glastonbury in England’s Somerset county. For the 73-year-old graphic designer, who helped create the cover art for Elton John’s Goodbye Yellow Brick Road and Queen’s A Night at the Opera, it’s the perfect location to wait out the pandemic, and to contemplate retirement. His home’s locale is also, as he says with a knowing laugh, “pretty apt” when it comes time to field a Skype call about his days as guitarist in Trees, the acid-folk quintet that bloomed for a brief four years in the late ’60s and early ’70s.

The group was one of many British artists in that era who were fusing the traditional folk music of their home country with the psychedelic rock that was being baked to perfection on the West Coast of the United States. Like Costa’s home, the music of Trees stood at the musical midway point between England’s mystical, pagan past and the electric sounds celebrated at Glastonbury.

Though Trees were part of a scene that included luminaries like Fairport Convention, Pentangle, and the Incredible String Band, their two lush, incandescent albums—1970’s The Garden of Jane Delawney and 1971’s On The Shore—never achieved widespread acclaim. In the five decades since their inception, the group’s legacy has been kept alive through the efforts of dedicated fans like Danger Mouse, who built the title track for Gnarls Barkley’s St. Elsewhere on a sample of Trees’ version of the traditional ballad “Geordie.” Other artists, like modern folk musician Sally Anne Morgan stumbled upon the band after a night spent going down a YouTube wormhole.

“There’s a push and pull in the songs that really does it for me,” says Morgan, who cites Trees as an inspiration for her latest album Thread. “Every song has different movements—and usually that stuff is pretty cheesy to me, but they do it in a confounding, amazing way.”

Now, fans of the British folk-rock scene have even easier access to the Trees catalog thanks to the release of a new self-titled boxed set, which pairs freshly remastered versions of the band’s two LPs with a collection of demos, radio performances, and buffed-up remixes of studio cuts. It also serves, in the eyes of Costa, as the closing of the last chapter in the band’s rocky history.

“What I truly believe I’m doing,” he says, “is discharging my final obligation on behalf of all the others. Just to get it done properly. This is kind of a swan song, and I just wanted it left in very, very good hands.”

Over the last five decades, Costa has served as the primary keeper of the Trees flame. It’s a curious position: He was the first member to quit the band when it became apparent that On The Shore was going to fizzle commercially. But Costa was also key to the creation of Trees, joining forces in 1969 with guitarist Barry Clarke, bassist Bias Boshell, and drummer Unwin Brown—all musicians that frequented London’s folk clubs when they weren’t scouring flea markets for imports of Quicksilver Messenger Service and Byrds albums.

Great as they were as a quartet, they gained strength with the inclusion of vocalist Celia Humphris. A drama student with little interest in folk music, Humphris auditioned for the gig as the group’s singer, turned down their offer to join then, hours later, changed her mind. Together, the five settled into a sound that, unbeknownst to them, was simultaneously being codified by groups like Fairport and Steeleye Span.

“It was coincidental,” Costa says. “Our path wasn’t a particular direction when we embarked upon it. It was something that came naturally to us, but were too young and inexperienced to have developed by the time we found ourselves embroiled in a ‘genre.’”

Following their formation, things moved fast for the band. After just a few gigs, they landed a deal with CBS Records and were soon in the studio recording Jane Delawney, an album of Boshell-written originals and amplified versions of traditional tunes chosen by Costa from a dog-eared copy of the Penguin Book of English Folk Songs. The resulting album is roiling and foggy, cut through by Clarke’s soaring leads and the keening, sumptuous vocals of Humphris.

Their vision only became clearer by the time Trees entered the studio in late 1970 to record On The Shore. Bolstered by many months of gigging, the group got more ambitious with their arrangements this time out: Boshell’s “While The Iron Is Hot” opens and closes with glittering harp lines and a string section from London’s Royal Academy of Music, but the song’s middle section bursts forth with a proto-NWOBHM stomp. And their majestic, tumbling 10-minute version of folk singer Cyril Tawney’s “Sally Free And Easy” was cut in one late-night take.

Trees crashed almost as quickly as they came together. New management failed to help the group’s prospects—especially after a promised tour of the U.S. opening for The Byrds fell through. Costa and Boshell departed soon after, and the remaining members attempted to soldier on with the help of members of fellow folk-rock group Mr. Fox. By the end of 1972, it was all over.

Of course, the group’s story didn’t end there. Their influence crept into the music of artists like Morgan and Wolf People, and their songs popped up regularly on compilations of music from England’s underground folk rock scene. The group’s original lineup even attempted a reunion to support the 2007 reissue of On The Trees, but only got as far as a few rehearsals before Brown fell ill. (He passed away in 2008.) Still, interest in the group continued to grow, and in 2018, Costa, Boshell, and a gaggle of younger musicians (including Costa’s son Sebastian and Edd Gibson of Friendly Fires) performed Trees’ material at London’s Cafe Oto in 2018. Two recordings from that evening are included in this new boxed set.

“Not so much a tribute gig,” David Costa says, “but just some kind of event that took the body of work and played with it. It was fantastic. They were what I had hoped Trees could have been 50 years down the line. And people got it. Several people came up to me and said, ‘This was the right way to do it.’”