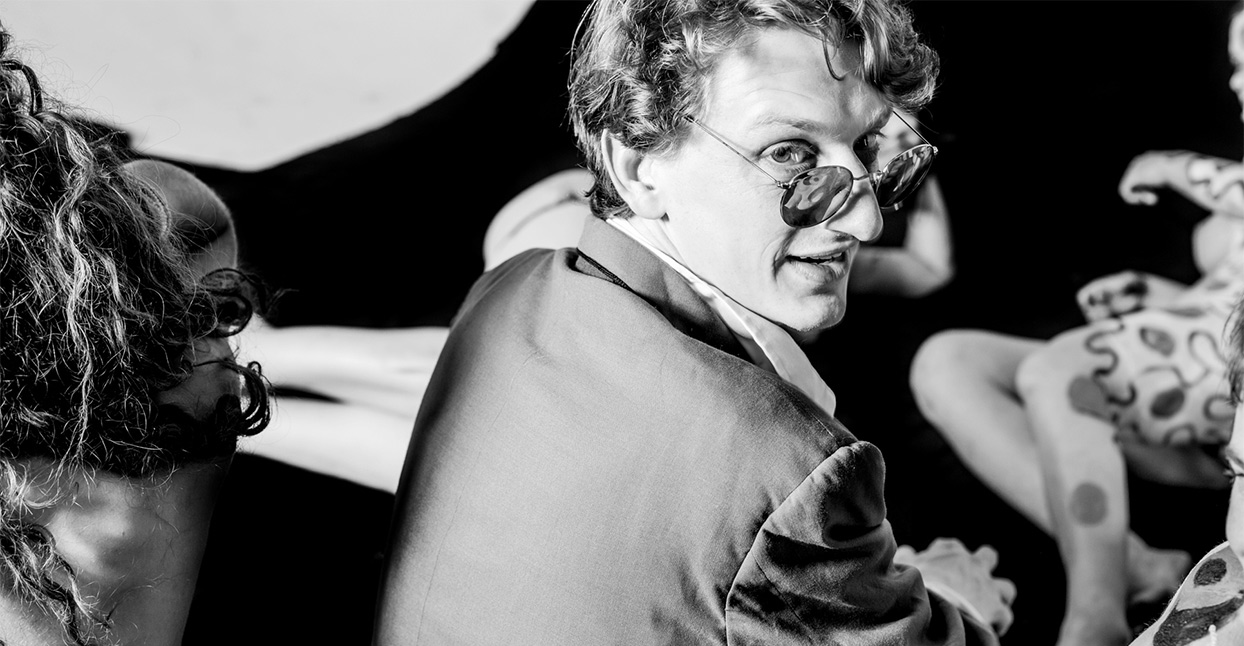 Tredici Bacci, a group made up of New England Conservatory students, write songs that channel the ambitious orchestral pop of Mid-Century internationalist cinema. Morricone, Mauriat, Ortalani—all of those influences and more turn up in their lush, loopy compositions. There’s also a healthy helping of camp; “Ca C’est Cantare,” from the just-released Amore Per Tutti, wouldn’t sound out of place soundtracking a French chewing gum commercial. Throughout, the 14-piece (!) put rich, complex orchestration in the service of bright, effortlessly charming melodies. We caught with up Tredici Bacci leader Simon Hanes (perhaps best known outside of this project for his wild bass contributions to Guerilla Toss) to discuss contemporary improvisation, musical in-jokes, and outre-R&B artist Gary Wilson.

The first time we spoke was two years ago, and you mentioned that you were working on new music. Is that what became Amore Per Tutti?

I was just beginning to conceptualize this record. There’s a [tape] in between the Thirteen Kisses EP and Amor Per Tutti named Vai!Vai! Vai!, that was half Tredici Bacci and half the Tredici Bacci improvisation band, which was called ENSPE. It stood for The Ensemble for New Perspectives in Sound Exploration.

[Morricone] was in this band called Gruppo di Improvvisazione Nuova Consonanza. They were searching for new sounds, Ennio and a bunch of badass European composers, and so I was trying to do an homage to them that was a little bit tongue in cheek. A lot of the members of Tredici Bacci went to the New England Conservatory in Boston. The majority of them were in the Contemporary Improvisation department, and that department is the ‘do whatever you want’ department. We were all really into experimental improvisation, drawing on that musical lineage but doing it with a sense of humor. The project was definitely an obtuse joke. The people that get that right away are few and far between.

What kind of impact did that experiment have on Amore Per Tutti?

For me, the whole experience of Tredici Bacci has been about exploring how to utilize all of these amazing musicians that are willing to work with me—and it’s a fairly large group. That whole experience was round two of getting the whole band together and making a record, but this time with even less adult supervision. I learned so much from that experience. That’s what Tredici Bacci is to me. We are constantly put in new situations where we have to somehow change.

We’ve been playing with [outsider R&B artist TBD] Gary Wilson. He came to town early this month for three shows, and it was kind of transcendental how well it came together. By the last show, we were so tight, and it became a very cathartic, celebratory experience. On the original Gary Wilson stuff, there are these parts, like in “Linda Wants to be Alone,” where the song happens, and then all of a sudden it begins to degrade into sonic chaos. When that section happens, we can play it so well that it’s as convincing as the parts of the song that are straight-ahead late ‘70s [style] R&B.

It’s all part of one big continuum—different ways that different musical experiences inform one another. It’s also about having fun. Improvised music has historically had the reputation of being a little serious, and I found that coming at it with just a little bit of humor boiling under the surface is really freeing for the band. If we were in a concert hall with a bunch of frowning old people judging us, we wouldn’t have made the same decisions.

How do you decide what is going to be Tredici Bacci material? Is there a process or does it just magically happen?

Obviously, Tredici Bacci is not very subversive. There’s some obtuse humor, and I’m interested in the idea of transgressing, but it’s not very transgressive. When you get down to it, it’s pretty happy music. But I think gradually we’ve been broadening our frame of reference, in terms of ways that we work within our self-imposed limits. The Tredici Bacci that made the EP would probably not have worked with Charlie Looker. However, he sounds like the people who sing the title songs in spaghetti western movies. He sounds like that!  His voice is so new, and yet has so many references to old things.

I’m trying to put this band in a world where we can get work, and get paid and do stuff, and get exposure. But on the other hand, none of the people in my band have cool haircuts on purpose. How are we going to be accessible to the casual music listeners if we don’t all get cool haircuts on purpose?  The answer is by showing that we have a sense of humor about what we’re doing.There’s two worlds fighting within Tredici Bacci. I love Burt Bacharach, I love Ennio Morricone, I love Armando Trovajoli. I want to write that sort of music. But it’s also funny to me to take my fist—and here my fist represents other kinds of music—and squeeze it into Tredici Bacci’s tiny little niche.