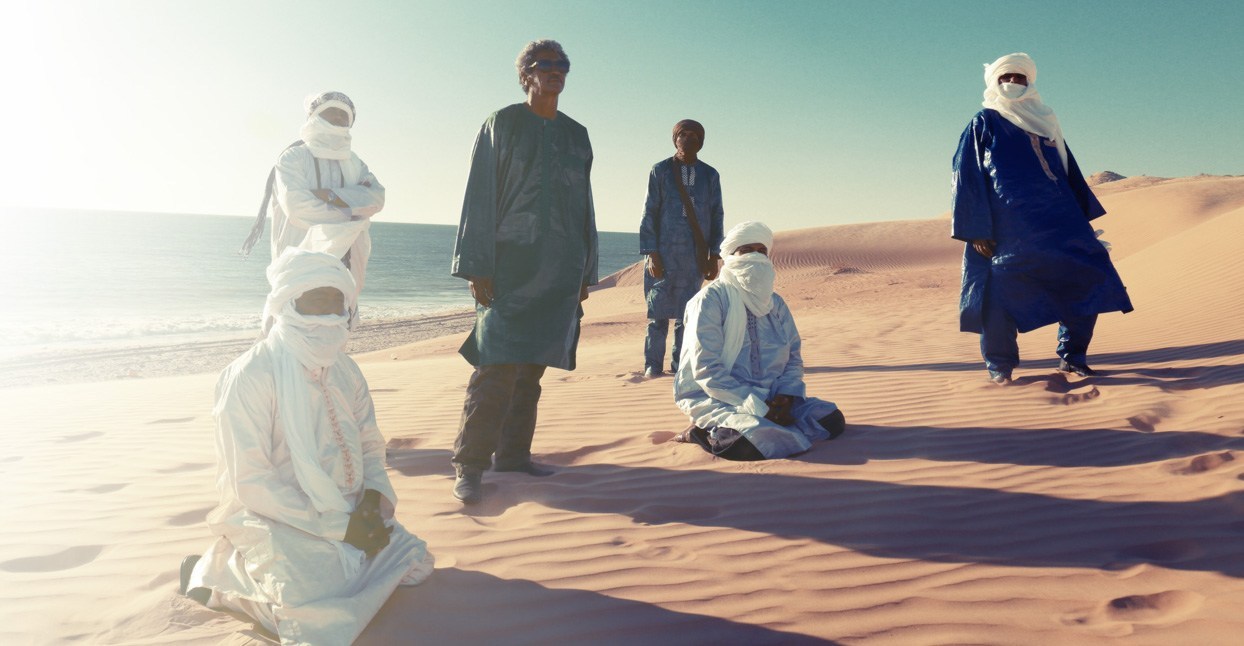 In some ways, the members of Tinariwen were like any other teenagers anywhere in the world: They first picked up guitars back in the early ‘80s, when they were still adolescents; they penned some emotional and confessional lyrics; and they formed a band. But in other ways, the members of Tinariwen were very different. Founding members Ibrahim Ag Alhabib, Hassan Ag Touhami, and Inteyeden Ag Ableline belong to the Tuareg tribe, who had been exiled to southern Algeria by the Malian government in the early ’60s. Furthermore, aside from being in a band, they were also freedom fighters, trained by Qaddafi’s military in Libya to liberate their traditional homeland at the turn of the ’90s. Only after many years of struggle, bloodshed, and finally a short-lived peace were Tinariwen able to focus on music full-time. Ag Ablil passed away in 1994, but in the 21st century, the band has enjoyed unprecedented success in the West and around the world, finding fans and collaborators in the likes of Robert Plant, Kurt Vile, TV on the Radio, and more.

Recorded amid the band’s travels through the Western Sahara last fall, Tinariwen’s ninth album, Amajdar, is a proud testament to the band’s nomadic heritage, the end product of many a late-night desert jam. “When we started doing music, it was just playing guitars and singing with our friends around the campfire,” Tinariwen bassist Eyadiou Ag Leche says via email. “We didn’t have a particular goal, just to spread the word about our people and our issues.” And in some ways, Amajdar is a return to basics. The group set up camp outside of Nouakchott, Mauritania in a large tent and—as the press release notes—played to an audience of scorpions. They played live without headphones and without extra takes (save a few added overdubs later on). “Honestly, our music doesn’t really change,” Ag Leche said. “The desert is where we feel the most inspired, because of the connection with nature, but also being out of time. We love it. Being in a closed studio is not possible for us anymore.”

Over the last few years, the political landscape has shifted both in Mali and elsewhere; Tinariwen remains perpetually on the move. While they fought for peace decades ago, conflicts still linger at home, such as when the militant Islamist group Ansar Dine rose to power in Mali earlier in the decade and targeted popular music—Tinariwen specifically—for addressing the Tuareg uprising in their songs. For a time, the band resided in the southwestern United States. “We knew the US only through Western movies,” Ag Leche says. “We like performing in the U.S. because of the power of nature and the landscape.” But the climate here has turned inhospitable, too When it was announced that the group would be returning to the U.S. this fall, it was met with racist threats directed at the group.

“Amadjar means ‘the foreign traveller’ and this album is about being a stranger in your own land,” Ag Leche says. “For more than 30 years, nothing has changed politically, but the climate is changing though and for our people—who are mostly shepherds—it is a big deal. So our songs talk about the nostalgia of the old days, the struggle with the administration from Mali, climate change. But it’s also about love and the beauty of our desert.”

And as on past releases, the band also gets some help from other players. Mauritanian griotte Noura Mint Seymali and her guitarist husband, Jeiche Ould Chigaly help out; their collaborative “Toiurant” is an album highlight. A few Westerners do, too—Cass McCombs, Sunn O)))’s Stephen O’Malley, and Willie Nelson’s son, Micah Nelson each make low-key but effective contributions, as does Australian Warren Ellis of the Bad Seeds.

“In every sense of the term, Tinariwen are the most truly ‘rock and roll’ band in the world,” Nelson says. “Knowing the very real trials and tribulations Tinariwen have overcome, and still often face makes our little indie band problems feel like Hello Kitty.” Nelson says that growing up around Afro-Cuban rhythms helped when it came time to contribute to the album. “The bending of time is very subtle and nuanced, but it’s also particular in Tinariwen’s music. It’s all about the groove and the riddle of it all is you have to relax to find the tight little pockets, like lots of puzzle pieces fitting together.”

For the most part, Amadjar is a hushed, restrained affair, emphasizing nuance, sly interplay between instruments (and hemispheres), and an accentuation of subtle groove over the hair-searing guitar pyrotechnics that flared up on previous albums. The acoustic “Taqkal Tarha” is propelled by hand percussion, group chants, and Nelson’s nimble figures on mandolin. It’s seemingly a joyous affair, though the song actually decries how greed and money has grotesquely altered the world. “Tenere Maloulat” is accentuated by the mournful plaint of Ellis’s violin, deftly replicating the timbre of the traditional Tuareg single-string bowed instrument, the imzad.

In years past, Tinariwen’s music often elicited comparisons to the blues, and Amadjar both deepens and expands that comparison. Because they favor acoustic instruments, it’s easy to how their entrancing musical explorations evoke distant memories of other folk forms which intermingled with the blues, like country and bluegrass. But ultimately, the band draws most heavily on their Tuareg lineage. Ag Leche explains that a song like “Kel Tinawen” foregrounds their tribe’s—and the band’s—defiant ethos. “Ibrahim Ag Alhabib denounces treachery and corruption and puts the stress on Tamasheq people’s resilience,” he says about the song, adding: “The band will always stay true to their beliefs, never give up and never forget their past.”