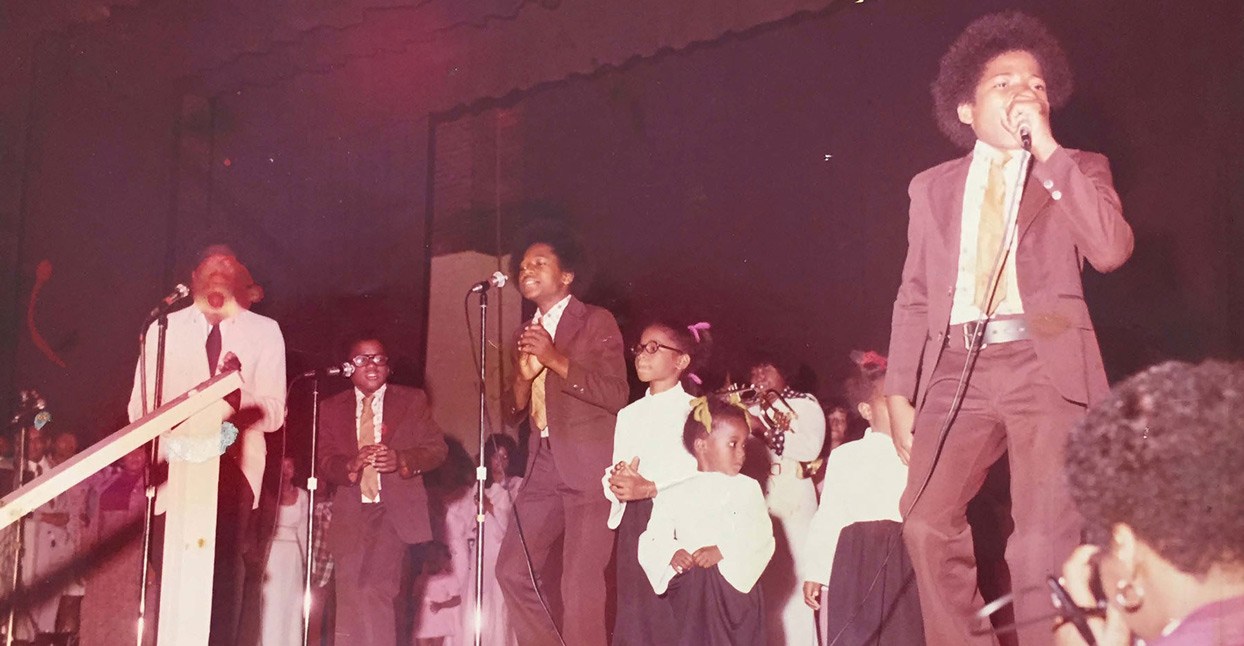 “We were coming up in such a hard time,” says singer Annie Caldwell. “Nobody really loved each other like they should.” She’s talking about the late ‘70s in America—the period of time covered in Luaka Bop’s new soul-gospel compilation, The Time for Peace is Now. Caldwell’s family band The Staples Jr. Singers (named as an homage, but otherwise unconnected to their idols) was part of a wave of gospel acts that blended spiritual concerns with the everyday realities of a largely Southern, African-American community still finding their feet in the aftermath of the civil rights era.

The intersection of faith and struggle is as old as religion itself. But the artists captured on this compilation—inspired by crossover successes like The Staple Singers, The Rance Allen Group, and The Mighty Clouds of Joy—brought R&B to gospel’s Sunday dinner, channeling their spiritual might into songs that addressed the secular issues of the time. The subtitle of The Time for Peace Is Now is Gospel Music About Us. As Caldwell puts it, “Most of our songs came from the experiences that we went through,”

With the exception of The Soul Stirrers—famous for having been Sam Cooke’s vocal group in the ’50s—the artists included on the collection will be unfamiliar to those who haven’t spent their Saturdays digging through dusty crates for obscure ’70s singles on long-forgotten micro-indie labels. Compilation producer Greg Belson, a British-born DJ who started out as a soul collector, is one such explorer; his love affair with gospel began in the early ’90s. “Gospel at the time was relatively untapped in the secular world of DJs,” he says, “so when I went on a record dig to the U.S. in late ‘93, I started surfing the bins, and found so much gold.” Some of the finest fruits of Belson’s sonic spelunking are shared here.

In addition to using their lyrics to take the temperature of the times, the artists on Time for Peace also adopted the funk and soul grooves that were on the rise in that period, effectively creating a sort of “post-gospel” music. Swapping conventional gospel rhythms for more contemporary grooves was another sign that a new generation was taking the reins and assimilating the popular sounds of the day; but it also may have been a pragmatic move. As Belson suggests, “The need to attract a new generation of listeners to their message was close to the core.”

Though some of these records have become collector’s items, changing hands for thousands of dollars today, most of them made only a local impact at the time of their release, coming perilously close to ending up in history’s wastebasket. But operating on a regional level may actually have helped these gospel artists in their mission to address humanist themes. “Local groups like the Little Shadows, Staples Jr. Singers, and the bulk of the artists featured on this compilation may well have written this style of song by referencing their local community, magnifying it into a universal meaning,” Belson says. “They focused on the congregation and the problems in their locale, and used that voice for a deeper, more widespread meaning.”

Rebounding from the horrors of the Vietnam war, Florida’s Little Shadows, another of this collection’s many family bands, released songs like “Mr. Nixon Hear My Prayer” and “A Prayer for Our Soldiers.” And on the  title track “Time for Peace,” they tether their pacifist pleas to a loping bass line and skittering soul groove. With its multigenerational vocal blend, agile bass line, and hooky pop-soul refrain, The Religious Souls’ mantra-like “Condition the World Is In” comes off like a lo-fi, socially conscious Jackson 5 outtake. And while “That’s a Sign of the Times” by Georgia’s Floyd Family Singers wasn’t released until 1980, the track still feels distinctly tied to the ’70s, with its yoking of disco-friendly beats to lyrics that depict humanity as staring down hate, starvation, and apathy.

But despite all the societal ills cataloged in these tunes, these were still gospel acts first and foremost. And none of them would have made it out their front door if they weren’t ultimately spinning an inspirational message of hope—however world-weathered and streetwise it was. Willie Scott & The Birmingham Spirituals point the way upwards on the lambent “Keep Your Faith to the Sky,” which Belson calls “a pure honeydripper of a track.” If it were about romance instead of agape love, it would have been perfectly at home amid Philly International’s smooth ’70s soul stable.

With its bed of wah-wah guitar and deep-pocket grooves, The Williams Singers’ “Don’t Give Up” is probably the funkiest song ever to quote Matthew 5:10-12 (look it up, heathen). It could be a churchier cousin to Curtis Mayfield’s “Move on Up.” Even when it shifts into a more colloquial tone, “If you hold out through the night I know joy gonna come in the morning” operates equally well on either (or neither) side of the spiritual/secular divide.

To Belson, that song is crucial. “That’s the crux of the message and the theme of the compilation wrapped up in a nutshell,” he says. “No matter what is happening in your own world, albeit personally or on a global scale, keep your head to the sky—please, don’t give up!”