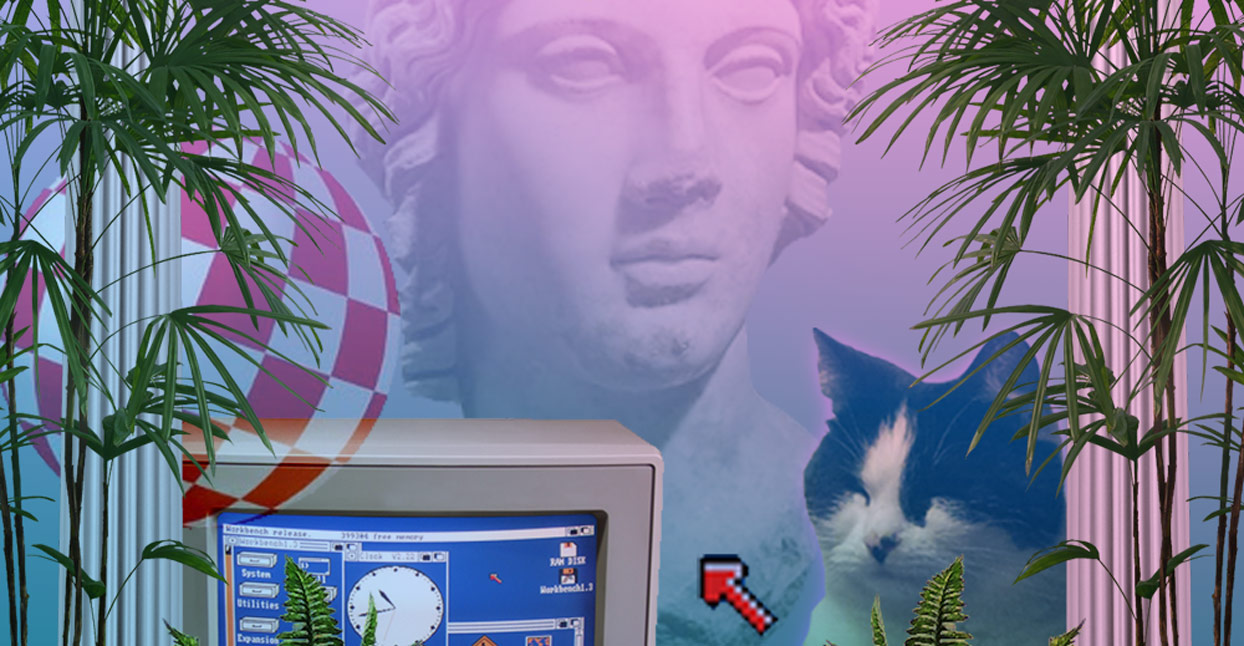 From folk music in the ‘60s to hip-hop in the ‘90s, the healthiest and most enduring genres in music are the ones that have existed at the center of a larger supportive scene. Vaporwave is no different, even if its artists seldom perform live, and even if they aren’t clustered around one particular city or country. That vaporwave has flourished isn’t simply because a few pioneering acts released seminal records, but because networks of like-minded people communicate with each other, share ideas, and work together to develop the genre into the singular breed of electronic music it is today.

Yet given the notorious anonymity and reclusiveness of its musicians, the community around vaporwave operates a bit differently than other genres. After speaking with over a dozen established and emerging producers, from Golden Living Room to waterfront dining and STAQQ OVERFLO, it becomes clear that the vaporwave scene exists almost exclusively online, and that the vast majority of fans and musicians regularly keep in touch with each other via the internet. Golden Living Room, for instance, revealed that he’s in “regular contact with about 10 vaporwave-related people on a monthly basis.” The maker of such futuristic psychedelia as Post-Internet and New Nostalgia also has a wider circle of around 50 people with whom he corresponds sporadically, mostly via a combination of Twitter, Facebook Messenger, Google Hangouts and Skype.

猫 シ Corp. (the man behind [지오 프론트] v3.1 and HIRAETH) also works with as many as nine of his fellow producers on music which, like many other artists in the genre, he does by sending files back and forth via email. This creative to-ing and fro-ing means that the genre is actually far more social and communal than the popular image of “anonymous [vaporwave] craftsmen” might suggest. It indicates how, in many cases, collaboration is almost intrinsic to the production of many vaporwave releases, and to its development and staying power as a genre. And at least as important, it shows that vaporwave records are often born not from isolated individuals surfing the web alone, but out of comparatively rich social contexts and dynamics—and even out of friendships.

Scenes in the Social Media Age

Since there are no key venues or zines, the vast majority of interactions between those in the vaporwave community take place on social media, with producers generally using the major social networks to communicate and exchange ideas. This reliance lends the scene they share a particular shape, structuring it according to the affordances and limitations of Twitter or Facebook.

Even beyond collaborations, many producers admit that their approach and attitude to vaporwave has been meaningfully altered by their chats over Twitter, Facebook, or email. STAQQ OVERFLO says, “My interactions with others in the community greatly shapes how I approach things […] In addition to that, it’s just cool to be making friends in the community, so it’s definitely had a positive impact on my life beyond music.” A similar sentiment is expressed by Chungking Mansions, 猫 シ Corp.,  and Golden Living Room, who affirms that other producers, “have significantly pushed me to better myself as an artist and a person.”

As waterfront dining puts it, “Every interaction has a basically positive impact on your life.” It’s  this aspect of the online vaporwave ‘social network’ that makes it most similar to the traditional idea of a “music scene.” It may not be geographically localized, but because it has social, personal, and musical ramifications for those involved, it has the same meaning and significance as other music communities. And because that communication helps individual musicians hone their art—and because, as musicians, art is integral to identity—it’s also responsible for nurturing and helping them to grow as people. Chungking Mansions confirms this, saying that speaking with other producers and fans, “gave me energy and confidence in life, I’m more delighted than before now, more balanced and way less depressed.”

In other words, producers find encouragement and validation in the vaporwave scene, and even if such encouragement and validation is transmitted remotely, it’s powerful and effective enough for musicians to create art and maintain their output. The scene—like those which preceded it—has been a kind of existential incubator for its members, enabling them to develop separately as individuals while also enabling them to work towards the mutual goal of creating music. To quote Chungking Mansions, “[Getting] in touch with other producers and meeting in real life was awesome. Some of them are very good friends of mine. I know and I trust that they are in the same train as me. We’ve got the same main goal, and we will go as far as possible. It’s not about ‘vaporwave,’ it’s about music.”

That vaporwave producers can form friendships in this way isn’t just a product of being interested in the same kind of music, it’s also that they share many personal affinities. This mostly is because many of them belong to the same generation—eight out of the 12 artists we spoke to fall into the 26- to 32-year-old age bracket, and at least four (or possibly five) are between 30 and 32 years old. That overlap in age might seem like innocuous, but it’s actually pivotal, since it means vaporwave producers have a store of cultural and historical touchstones through which they can relate to one another.

This turns up in the way Color Television mined late ‘80s and early ‘90s TV shows under such aliases as Costanza and Carlton, while chris††† and 猫 シ Corp., did much the same for their frasierwave and Class of’84 albums. It’s also manifested in the way the music made by the producers we spoke to is littered with PlayStation bootup sounds, Wii menu screen sounds, and sonic references to other older video games (Eco Virtual’s use of the music from Final Fantasy and Death Dynamic Shroud.wmv’s sample heavy I’ll Try Living Like This are particularly notable examples). These references underline the fact that the genre’s artists have overlapping tastes, and grew up on a similar cultural diet, which strengthens the bonds between the indviduals as well as within the overall scene.

The genre’s focus on nostalgia, the ironic stance it adopts towards modern consumer culture, and its recurring desire to break through to different—even transcendent—realities, are all in their own way expressions of what it feels like to come of age as a millennial in the 21st Century, something every noted vaporwave producer has done. Contrary to the genre’s stereotype as anonymous, jokey, meme-obsessed, and detached from reality, it’s an outgrowth of certain demographics who have led certain kinds of lives. Around half grew up in working-class families in the midst of a rapidly globalizing world, and passed through university only to hold down routine jobs they often loathed. Chungking Mansions had to, “work very shitty jobs, from pick and pack operator to DIY store seller” after leaving school, while the college-educated chris††† used to work at the local supermarket.

Because the online nature of the vaporwave scene allows plenty of room for wider participation, fans themselves play a larger role. They may not actually produce any (or much) vaporwave, but because they have carved out virtual forums on places like Tumblr and Reddit (the vaporwave subreddit currently has some 55,000 subscribers), they are responsible for much of the discourse and activity that drives the genre forwards. They’re the ones who buy the most releases and create the most buzz around albums, and as such they provide more of the essential feedback that results in certain strands of vaporwave flourishing.

Because of this, the fans as integral to the scene as anyone else, and the community’s online nature means that they frequently get closer to musicians and producers than listeners in other, more traditional scenes do. “I love talking with fans,” says waterfront dining. “I’ve gotten heartfelt messages from folks that I wouldn’t trade for the world. I’d say every interaction has had a basically positive impact on my life.”

The vaporwave scene isn’t simply united because of shared musical taste, but because the people in the scene have enough in common on a personal level for them to find this music similarly meaningful. They’ve grown up in similar ways in similar environments at roughly the same time in history, and vaporwave indirectly conjures that time and place through its portrayal of anonymous consumer cultures and aborted, dystopian futures.

In comparison to past scenes that revolved around geographical proximity and physical interaction, the vaporwave community as a whole is less tightly knit, lacking the cohesion that could cause it to become a cultural force for concerted political change, whether to the left or the right.

While the mostly digital nature of the vaporwave scene means that ties between its members are less binding and less conducive to social and political unity, it also means that this scene better reflects and reinforces the genre’s themes—or at least those that relate to the mediated nature of society. From the looped simulations of CVLTVRΣ’s Virtual Life to the computerised reminiscences of STAQQ OVERFLO’s MEMƟRY GΛRDEN, those themes are corroborated and lived out by a community that does the vast majority of its ‘communing’ in virtual spaces, where producers can retain a certain degree of anonymity—or even artificiality (not that any particular producer we spoke to is necessarily artificial).

The virtuality of its scene proves the truth of its artistic vision: the scene may be the very thing a big portion of vaporwave signifies. The genre is known for its focus on nostalgia, its ironic recycling of culture and memes, and its depiction of faux utopias and, in many ways, the members of its wider scene bear out these themes when they interact with one other. On Reddit and on Tumblr, fans communicate to each other less via actual conversation and more via digital art that cannibalizes everything from celebrated soccer players to Conservative British politicians; they often wade in a kind of collective nostalgia focused on old TV programs, actors and video games. And as for ‘faux utopia’: the scene’s interactions predominantly take place on the web, which was once billed as a liberating force but is now being typified as a failed or nightmare utopia where individual voices are being lost in a sea of noise, falsity, and surveillance.

Because of this, the vaporwave scene has come to be caught in a kind of self-reflective loop with the genre that spawned it, with each now feeding both into and off of the other. This might make vaporwave seem as though it has little relevance beyond the subculture it engendered, yet in the end, the fact that it was able to birth such an active and enduring scene proves the opposite. Vaporwave attracted converts precisely because listeners and future producers recognized their consumeristic, hypermediated, nostalgia-obsessed world in its message, which resonated strongly enough with them that they gravitated towards others who felt the same way. And once again, it’s only because these people formed online networks and communities with one another that vaporwave was ultimately able to secure the scene necessary for it to grow and to evolve, and for it to become the genre it is today, and will become tomorrow.