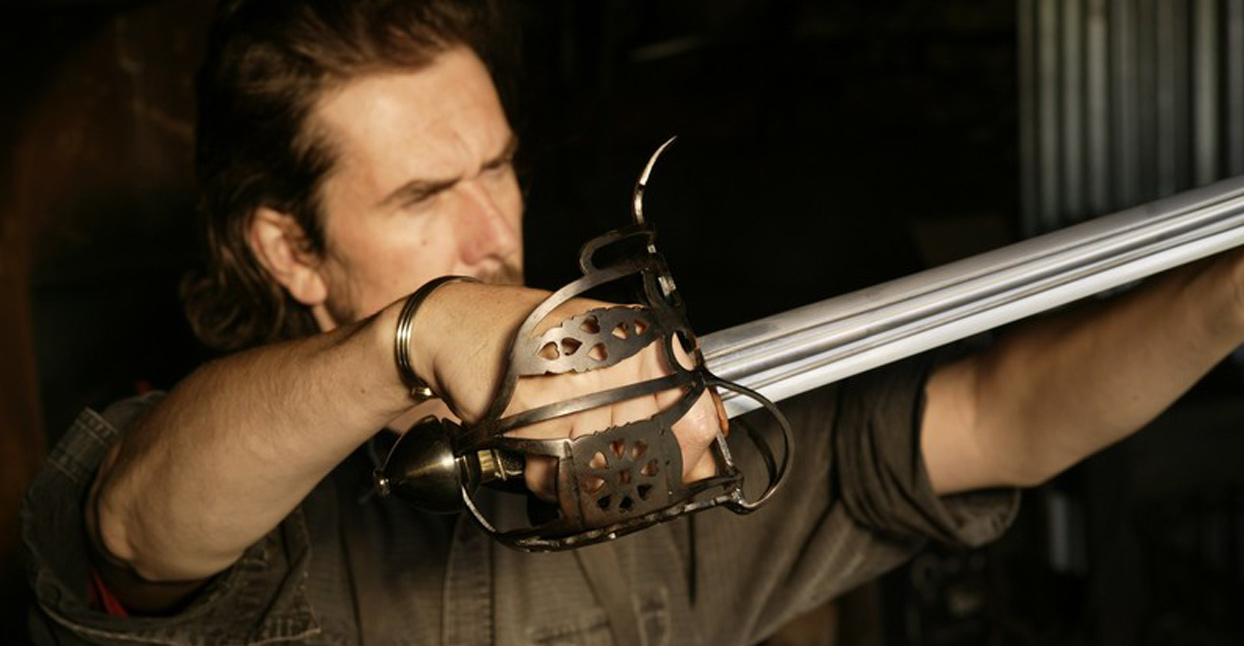 Rob Miller is known for two things: forging badass swords and recording kickass heavy metal. Miller first rose to prominence in the ‘70s with the Crass-approved outfit Amebix. Combining the anti-authoritarianism of anarcho-punk with the lumbering chug of heavy metal, the band created a doomy sound that roared like Motorhead, and stomped like Sabbath, while contemplating metaphysics.

But after a decade of absolute poverty, Amebix collapsed in 1987. Soon after, Miller’s personal life crumbled, and he was in a near fatal motorcycle accident that crushed his arm. With nothing left to lose, Miller left his home in England and retreated to the remote Isle of Skye in Scotland, abandoning music altogether.

In its place, he focused his creative energies on learning the ancient art of sword craft, learning the trade bit-by-bit, moldy book by moldy book. Now, after some 25 odd years of study, Miller is renowned for his blade work.

Fittingly, Miller has returned to music with his band Tau Cross, which includes heavyweights from Voivod, Misery, and War//Plague. The band is about to release their second album Pillar of Fire, so we spoke to Miller about his day job, the new album, and existence itself.

First off, why the swords?

There was always this weird thing in me. My father had a military antiquities shop and became a gunsmith. I grew up around guns and knives. Instead of playing football, we grew up shooting guns. That was very peculiar at the time, especially in England in the ’70s. We always had this sort of undercurrent.

You can see this from early Amebix until now—axes and swords harking back to a medieval view. It must be deeply buried in the subconscious—the sword being the ultimate living symbol of the individual’s empowerment and the ability to define one’s own space.

It initially seemed to me swords have only one function: violence. But then I thought that it can be used offensively or defensively—meaning that while it’s a tool of violence, it could be considered an icon of positive violence.

The sword has so many different connotations. In the West, we have the ‘double-edged sword,’ which is a well-known metaphor. The sword can be a symbol of justice—right or wrong. It can be seen in the spiritual sphere as a focus of will. I don’t necessarily associate the sword with violence or acts of violence. I see it as a living a numinous archetype that we all hold in our collective unconsciousness that still survives.

Is that line of thought what led you to becoming a swordsmith?

My quest, at first, was to find the source of what the sword is, with Arthurian and Viking myths. How does it resonate with all of us? What does it mean? My work with swords began as esoteric, and now it is my day-to-day business. I will get customers who want their life circumstances to be included in the work. They are crystallizations of their own life that they want to bring out in one singular symbol.

In a way, the concept of the ‘singular symbol’ is represented on the new album. The title Pillar of Fire seems to reference the Old Testament, when God was providing guidance to the Jews as they escaped from Egypt.

Right, Moses basically taking the Jews out from under control of the Pharaoh—the great slave master if you’d like. My interest in the metaphor is of the image itself. It was a pillar of cloud by day and a pillar of fire by night. If you think of that as a visual experience, it’s like a UFO—cigars of light, or the guiding light taking people across the land. It can be a metaphor for reliance on technology, or reliance on exterior technological source as being out new kind of god.

I was thinking of the Old Testament’s Pillar of Fire, and about how it acted as a sort of liberator, but the people below could only go as far as it would allow. It reminded me of the slogan ‘No Gods, No Masters,’ which Amebix adopted.

I was speaking with someone about the idea that we live in a controlled system that is visited by entities that live on a different spectrum of vibrational frequencies. It’s  a weird conversation to get into. I read some strange literature and have some strange ideas—the interaction between the seen and unseen world. What if we are being blindly led on, perhaps by a more manipulative force? But, sometimes people say, ‘What the fuck is he on about?’

Do you not like talking about those things because they are too private, or do you not mind?

I don’t mind. I’ve always stated myself as a Gnostic rather than agnostic. I do keenly follow some of the ideas that the Gnostics had. When we said ‘No Gods, No Masters,’ that’s not to say there isn’t a spiritual reality. It was to recognize that the gods—the Roman gods, the gods which were household gods, such as God of cooking or god of taking a shit, to the more sophisticated ones such as weather, the seas, the mountains—to recognize them as these archetypical forces, and to say that we need to look beyond that.

In my mind, these things are a part of the controlled structure itself. The Gnostics did believe that the created universe is illusory, but the illusion itself is created by some other force, and that force is not conscious of the fact that it’s not God itself. It’s the truth beyond the abyss, which we have to navigate after death, otherwise we get trapped in this cruel system that involves reincarnation. We are recycled back into this kind of hell—it might not seem to be hell, but we are otherwise subjected to this same cycle.

People of various religions try to sell you the idea that it’s for the evolution of the soul, and we are getting better and better, but I don’t see that. People are getting darker and darker. There’s not great enlightenment. There’s no resolution here.

I find that it is interesting. When you say things like ‘believe,’ without having direct experience, you can’t say that or this is so. I find myself drawn towards line of philosophical thought because those seem to resonate with me.

So, it’s fair to say you’re always thinking about these kind of heavy things without coming to a single conclusion?

My life has been one of inquiry. I’ve never found a solid answer. The more you know, the less you know. But now, I’m more relaxed about it. I like to look at things and say, ‘There are many ways that you can look a this.’ People might get reactive or become more set in their ways as they get older, but, for me, it doesn’t seem that way and I’m quite happy about that. If someone can come to me with a line of thinking or argument and can say it without, ‘You’re a dick,’ I’m willing to listen.

I’ve noticed a trend, particularly on social media, ‘If there’s any Tories in my friend list, then just fuck off!’ I don’t see that as being particularly effective. I don’t see that echo chamber as progressive. I like having friends that I profoundly disagree with. They might be the most bigoted assholes on earth, but they know something that I don’t know. There has to be something behind everyone that has made them who they are. I want to understand different views and amalgamate them into myself to make myself a more whole person.

You touch on social media as a way to keep people distracted and divided on ‘Bread and Circuses.’

Right. Media moguls particularly have this cynical view as people being cattle-like. To be honest, we are very cattle like. To control people, make sure they have enough to eat and have to be entertained. They’ve done that with reality TV.

But, there seems to be a move away from that, now.  People have taken a step aside and there is more awareness towards the tools used to control people. So, there is hope.

I did a month without Facebook—that’s a ridiculous thing to say. It’s absolutely pathetic! But, I did it, and the anxiety levels go right down to nothing. I was beginning to appreciate the immediate environment. The actual land. The actual conversations you naturally have. You have to make an effort to talk to someone and there’s a real beauty to it.

People are getting anxious now that we are connected. We are connected, but how much can we deal with? We can’t empathize with everything. We get burned out. We need to recognize our potential. How much can we take on? How can we have an effect on our everyday life? It has to be from the individual upwards.