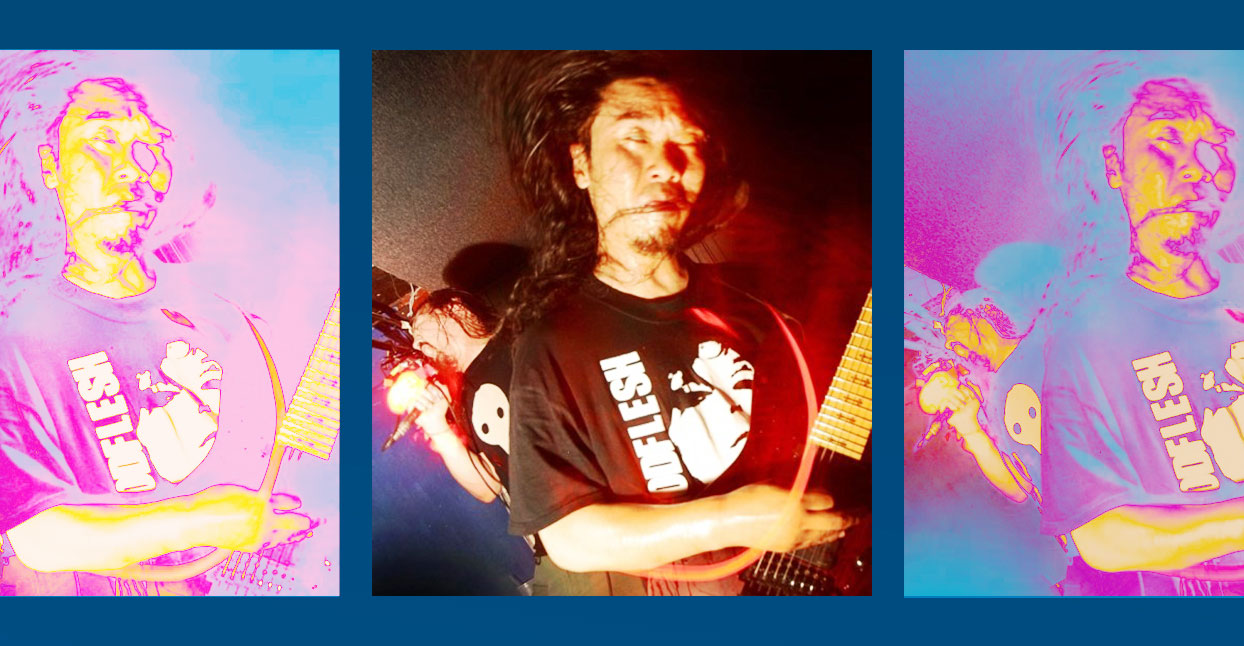 Guitarist Takafumi Matsubara should have been riding high in 2014. His band Mortalized, together since 1997, had risen to legend status on the global grindcore scene, and he was pulling double duty with the enigmatic art-doom project Corrupted. Former Discordance Axis singer Jon Chang had also recruited Matsubara for two bands: Hayaino Daisuki and Gridlink. The former was a goofy, thrashy side project (the members didn’t even appear in their own band photos), but the latter was a grind all-star squad featuring Chang, Matsubara, Discordance Axis/Human Remains guitarist Steve Procopio, and drummer Bryan Fajardo, who’d played with Kill The Client, Phobia, Noisear, and others.

Gridlink’s first two releases, 2008’s Amber Gray and 2011’s Orphan, packed 11 and 12 songs into as many minutes with zero subtlety. Matsubara and Procopio riffed at lightning speed as Chang screamed his lungs out and Fajardo laid down machine-gun snare runs. But the band’s third disc, 2014’s Longhena, was a stunning leap forward, maintaining the headlong fury of their previous work while making room for a violin-led instrumental and an almost power metal closing track.

But just as Longhena was released, Matsubara was struck down by a catastrophic health emergency. “It happened suddenly,” he recalls via email from Japan. “Dizziness and nausea…I went to the hospital soon. The doctor said, ‘cerebral infarction.’ Fortunately it was light. But my three fingers and throat did not work. My irregular life and fickle eating caused it.” He had suffered a serious infection and inflammation in his brain, which cost him the use of three fingers on his left hand, including total paralysis of his middle finger. At the time, no one, Matsubara included, thought he would ever play guitar again.

He was determined to make a comeback, though. “I started practicing again soon,” he says. “But that was so hard. I gave up again and again.” At first, he attempted to change his style to adapt to his reduced abilities. “I wrote songs that I could play with two fingers.” But slowly, painfully, gradually, he felt his abilities returning.

He planned a collaboration with a close friend, drummer Hee Chung from Unholy Grave. “When I was in Mortalized and joined Gridlink, only a few musicians focused the possibilities and technique of grindcore in Japan. Hee Chung agreed with me. So we had a plan to form a band to catch up with American and European high level bands. We promised to practice hard and form the strongest band,” he recalls. “I wrote two songs for a demo.” But then Chung also got sick. “When I retired, he was hospitalized, too. We encouraged each other.” Chung died of cancer in 2015, and their plans for a new band faded away.

In 2016, though, Chris Mitsuhiro from Chung’s former band Naquro recovered a file containing Chung’s performance of one song from the demo. “I was eager to record my guitars and release it,” Matsubara says. That song, “Selfish Vow,” with vocals from Mitsuhiro, was the first piece of the puzzle that would eventually become Strange, Beautiful And Fast, Matsubara’s first solo album.

The 17 tracks on Strange, Beautiful And Fast span a broad stylistic range, from the raw assault of the opening “Stuttered Rope,” featuring vocals by Full Of Hell’s Dylan Walker, bass from Hiroyuki Uno of Black Ganion, and drums from Bryan Fajardo, to the avant-noise grind of the album’s longest track, “Pull Out My Eyes,” which features Gnaw’s Alan Dubin on vocals, electronics from Vivian Slaughter (formerly of Gallhammer), and Balazs Pandi on drums.

“Many friends sent me messages and encouraged me,” says Matsubara. “I checked their music again and again. And I asked them if it was possible for us to make music together. Fortunately, they all said yes.

“I wrote songs after I listened and watched their playing,” he continues. “I sent them demos of click tracks and guitars. They composed their parts. I listened to it and arranged it. And I asked the vocalists to write positive lyrics about life and their vision. Some musicians gave me their songs, and some musicians recorded together. So many experiments and experiences.”

Former Kill The Client vocalist Champ Morgan, currently fronting noise-metal act BLK OPS and making solo work as Derelict Satellite, is featured on two tracks, “Halo Of Lies” and “Controlled Matrix Of Thought.” He says, “Matsubara and I are friends on Facebook, but have never met face to face. We’ve both been fans of each other’s work for a long time. We’re also both martial arts guys. We both train as much as we can, and play music as much as we can. Also, we both shared time in bands with Bryan Fajardo.”

His contribution was quick and easy. “The whole thing was basically built piece by piece and sent to [engineer] Irving Lopez in Dallas to mix and master. I was here in Texas, so I went to Dallas and recorded directly with Irving. I had free rein over what I did and how I did it. He said, ‘Just do what you do.’ It was fun and challenging. I really enjoyed doing it.”

Pandi, a drummer whose ability to blend free jazz and blast beats has led him to collaborations with other Japanese musicians like Keiji Haino and Merzbow, has actually worked with Matsubara in person. “On my recent trip [to Japan] we booked a studio, and we just improvised,” he says. “I think Takafumi’s idea was to include my world of improv and free jazz, and see what we can come up with if we collided these worlds.

“It was just the two of us jamming, and then we trimmed the best part. As far as I remember, the track is unedited, only overdubbed. Alan — or as Takafumi refers to him, Master Dubin — got involved through me, as he is an old friend, and we had just finished an album’s worth of material with Jamie Saft and Merzbow as a quartet, so Alan was ready to dive into something new.”

Before Strange, Beautiful And Fast was even an idea, Matsubara and Pandi met, just to jam. “He was still recovering, and his middle finger did not work up to that point. We still felt like we should not pass the opportunity to jam, as it’s not every other week I am in Japan,” the drummer recalls. The results were astonishing.

“We went into a rehearsal space, and for about five to ten minutes, all of Takafumi’s fingers were working. The doctor did not believe him, until he showed the footage from his iPad from the day before. The doctor said to Takafumi that it was a miracle. Before that, they were not even sure if or when his middle finger would work again. The next day, we were driving around Kyoto, doing the crucial visit to Mortalized vocalist Sanshiro Yamazaki’s excellent La Madrague restaurant. When we hit a red light, Takafumi turned to me, and said, ‘Now I can dream again.’ I am happy that this dream became reality, and I feel honored to be part of it.”

Indeed, Matsubara seems overwhelmed by the love the global grindcore and underground metal scene has shown him. He recently completed a US tour, and has a new band, Retortion Terror. “To tell the truth, I have not realized what I did and what I do now,” he says. “I’m just a salary man who likes tortoiseshell cats and karate. The great musicians gave me special presents. I’m the happiest guitarist in the world.”