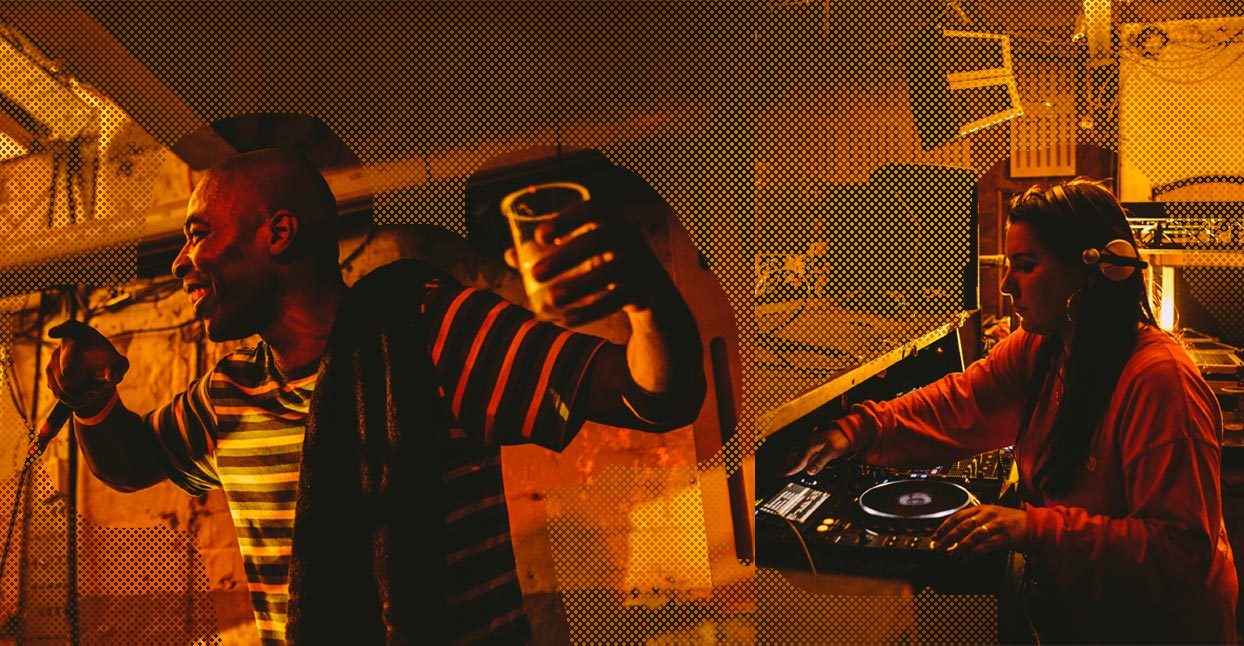 The U.K.’s underground has a rich history of iconic labels incubated in sweaty club spaces. Today, nightclubs appear to wield a diminishing cultural heft—deserted by youngsters, stifled by pernickety and expensive regulations, and consistently under threat from cultureless property developers. Building a club-based label and following on such shaky ground has arguably become more difficult.

But Balraj Samrai and Ruben Platt, 31 and 30 respectively, aren’t sitting in a pub in East London to chew over the city’s night-time economy or the city’s Night Czar, Amy Lamé. They’re here to talk about Swing Ting, their Manchester-based club night which turned 10 at the end of 2018, and their record label of the same name, which celebrates its fifth birthday this year.

Founded in 2008, the night began at a particularly fertile time for underground clubbing in Manchester. Dubstep and its various offshoots had found a firm footing in the city with nights like Format, Drum Clinic, Bass Camp, Strange Fruit, and Hoya; Hoya appealed to a discerning crowd of bass music enthusiasts. Posers would queue up for Murkage’s weekly antics, and electro-house and fidget nights would still (somewhat inexplicably) fill mid-sized club spaces. Dancehall, reggae, and dub music were all catered to at soundsystem-led nights.

Somewhere in the middle of this glut, Samrai and Platt planted Swing Ting’s seed. “We called it ‘street rave,’” laughs Samrai, recalling the tongue-in-cheek catch-all they’d slap across early flyers for the club night. “Maybe we could bring that back.” Platt cringes so hard he’s at risk of giving himself an aneurysm.

The pair had already been DJing around the city for a couple of years—playing a crate-digger’s blend of bashment, bassline, grime, hip-hop, and garage—and built a strong network of friends through late shifts distributing flyers outside clubs at closing time. The week before Swing Ting parties, Facebook was peppered with posts from other promoters encouraging their audiences to head down to Charlie’s Bar—a since-shuttered Chinese karaoke bar in the city centre—to dance with the Swing Ting crew. (Instagram didn’t exist at this point, and Twitter was still a curiosity for most people.)

Perhaps their status as the “promoter’s favorite promoters” came from the lack of pretentiousness that typifies both Platt and Samrai and their night. “I think we never really wanted it to be that serious,” says Platt. “Not that we weren’t taking it seriously—we’ve always cared about the fundamentals: having a really good sound system, finding the right host that works for the night, keeping it cheap—but it’s always been fun.”

Steadily, the night expanded from a two-man operation to include a regular rotation of residents including Joey B, who also ran reggae and dancehall night Hotmilk; Murlo, whose genre-bending productions perhaps best define the night; and the veteran MC Fox, whose soulful vocals and mischievous grin are well-known on Manchester’s club circuit. Their carefully curated lineups eschewed chasing big-name flavors-of-the-month in favor of establishing a consistent identity for the party. Frequent appearances from the likes of Brackles, Famous Eno, and, later down the line, similarly-minded selectors from further afield (among them Equiknoxx Music and Mixpak’s Jubilee) helped to define the club night as—to quote Samrai—“a family thing.”

By 2014, the night had settled into a monthly slot in the basement of Soup Kitchen in the city’s trendy Northern Quarter, and was tightly woven into the fabric of Manchester’s nightlife. This was also the year that Platt, Samrai, and Joey B founded Swing Ting’s record label arm, applying the same familial and curatorial instincts that had made the club night so successful (the first release was a Brackles and Fox collaboration). “I don’t think you can separate the two,” says Platt. “They’re so interlinked.”

Indeed, many of the names to appear on the label roster over the past five years have been prominent players at the night. To date, the label has provided a home to everything from deconstructed dancehall out of Jamaica, to screwface bassline, bashment bubblers, “romantic” reggaeton, and trans-Atlantic gqom experiments, as well as Samrai and Platt’s own eclectic productions. Maintaining this tight-knit group of artists around both the club night and the label—which releases predominantly in digital formats—has allowed Swing Ting to be more nimble than the competition.

“We’re able to find music we like and release it pretty swiftly,” says Samrai. “The bigger independents are a bit more under pressure—and they agonize over what they’re going to do for too long, so by that time the project’s kind of lost heat. The majors rush stuff out without the quality control. We might have limited resources and money, but we have quality control and creative control that we can apply to stuff.”

But having reached this stage—a comfortably successful monthly party, and a label going from strength to strength—the pair fear they might reach an impasse of sorts. They admit that they didn’t expect the club night to last this long, and had quietly considered (to stern resistance) winding it down around the 10-year mark. In response, they’ve tasked themselves with not only growing the night’s boundaries, but pushing the envelope with their audiences too.

In February of this year, Latin club DJ Florentino, a Swing Ting affiliate, took over for a night of reggaeton and dembow sounds with Club Romantico. “Some people were challenged by it,” says Samrai. “It made me realize that people do expect something of the night, and that maybe we should be challenging people a bit more.” Elsewhere, the co-founding pair are currently mapping out plans for a series of four events that will take in London’s four corners over the course of 2019. They’re also looking to introduce new residents to the night, to mentor and incubate the next generation of talent, and pass on some of the knowledge they’ve accumulated over the years, while continuing to grow the label.

What club land will look like in another 10 years is almost impossible to imagine, but both Samrai and Platt are assured of one thing: there’ll always be somewhere to party in Manchester. “I feel like people in Manchester just love going out and partying, and always will,” says Samrai. “I think they just love raving and love finding a way to do it, even if it is their last dollar.” Right now, the Swing Ting family is both adding its name to this party town’s history books and nurturing a new generation of global ravers—for whatever the future might hold.