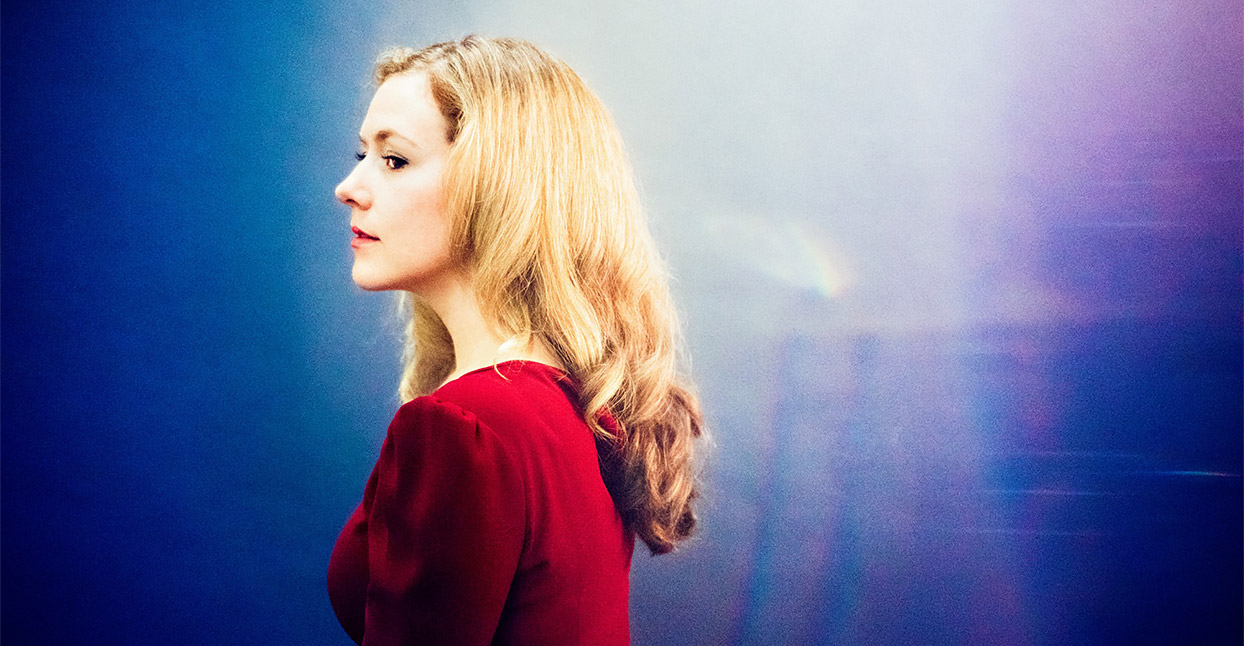 Greta Morgan knows about heartache. Having achieved some distance from the breakup that fueled her second album as Springtime Carnivore, the Los Angeles-based musician can smile at how far she’s come. Navigating the treacherous terrain of an unspooling relationship is no easy feat, but Morgan’s focus on music, poetry, and visual art helped keep her grounded during an emotionally turbulent time.

“It’s like being divorced,” she says, taking a sip of her almond milk latte. “We lived together for a long time. I find that a lot of emotions of the heart wind up coming out in music. This record is basically a 100% emotional reaction to that experience.”

Midnight Room is, indeed, a breakup album, albeit it one dusted with a bit of sugar. Across 10 tracks of spiky guitar pop, Morgan sings about the kind of topics Dusty Springfield built a career on—love, lost love, and how to achieve personal autonomy in the face of both. It’s a song cycle about a universal experience that’s littered with personal details, Morgan navigating sleepless nights, wistful recollections, and relishing the small moments of triumph that come with moving on. In the end, Midnight Room is a victory lap—even if that victory was hard won.

Anything by Cat Power. Her voice has a very soothing tone, which is perfect for breakups. The records I was listening to during this period of time weren’t specifically breakup records, but I’ll always associate them with that now. I was listening to Neil Young’s Nebraska, a lot of Bobbie Gentry, the Bob Dylan song “I Threw It All Away.” In a weird way, some songs that are pure love songs, when you’re listening to them in the midst of a breakup, it’s even more heartbreaking.

How did you skirt breakup clichés while writing?

It’s funny, there’s that one lyric in “Nude Polaroids,” “Are you making breakfast now/is your bread still being burned?” I always wondered whether or not to leave that lyric in. My ex-boyfriend would always put toast in the toaster and forget about it, and it would burn. It’s funny, because it’s such a specific little detail. It’s not a relatable detail, and it doesn’t even need to be in the song. I remember reading an interview with Leonard Cohen where he said, ‘Never say tree!’ That’s one of his rules. You never say tree—you say sycamore, or you say elm or maple. Because the more specific something is, the more universal it can feel. There were a lot of things that were drawn from specific moments.

But a lot of the lyrics are very disjointed, and it’s because I did a lot of the writing using these index cards that I cut into eighths. Every time I’d read a phrase that I liked, or overheard something in a conversation I wrote it down. So when I’m in the process of writing and I don’t know what the next idea is, I’ll pull one of the cards out as a trigger. Almost like a writing exercise. So I feel like some of the lyrics that don’t sound right, or don’t make sense next to each other came from that. But I feel like that’s almost how your thinking is when you’re going through a grieving process, or you’re going through an intense emotional cycle. Your thinking is very fragmented. It’s very scattered. In some ways, I feel like the style of how I wrote made sense in the context of what I was writing about. Although sometimes I worry: Can I not come up with an original thought? Why do I have to play games?

Brian Eno had the Oblique Strategies cards. So hey, if it’s good enough for him…

Someone just followed me on social media called Brian Emo! It got a laugh.

So when you are pulling out these little moments, like the burned bread, have you ever gotten to the point where you’ve wanted to pull back, or maybe go a less personal route?

Yeah. But I feel like that’s what I like about other people’s work. To me, ultimately the goal of any artist should be to express themselves in a way that is honest, vulnerable, and open. Because that’s how everyone’s going to feel less alone. If you read a piece of writing, or experience a piece of art, or someone has an experience that you can relate to or learn from, that’s how we can all avoid loneliness. At least, that’s how it is for me! So I do feel like more personal is better. But I do try not to slander anyone in a way that listeners would know. Like I would never title a song with the name of the person who it’s about and make my feelings really obvious.

What does the title Midnight Room mean to you?

There was this feeling I realized that I had not experienced in my adult life until this happened, which was the feeling of not being able to sleep, or waking up in the middle of the night and being in a completely empty house. My whole adult life I had roommates, or I’ve been on tour with bandmates. Having lived with my partner for four years, I was with him whenever I wasn’t on tour. So there was this feeling when I’d wake up in the middle of the night—this silence. Midnight Room describes the absence that I was feeling in those moments. To me, a lot of the sounds on the record are the sonic equivalent of nighttime—like if a synth could sound like constellation, or the sonic equivalent of cobalt blue, or the sonic equivalent of the quality of stars in Montana. I was trying to create this velvety, nighttime series of textures. Because that’s what I was living in at the time.

Did you embrace the loneliness? Or was it something you fought against?

Lately, I’ve been thinking about whether we choose to feel emotions, and if we’re responsible for the feelings we’re having, or whether emotions are something that happen against our will. So any difficult emotion I was dealing with, whether it was jealousy or loneliness or frustration or confusion, I would try to think: ‘Is there just a certain quota that I have to fill of this emotion before I move on to a different feeling?’ Or can I just decide to be like ‘Cancel cancel! Escape escape!’ I just don’t know. I’m still thinking about that all the time. I found that for me, if I fight against an emotion, it just comes back at me 10 times as strong. So it’s sort of like building a dam in a river if I’m not letting a feeling come: there’s just more and more pressure. Once I finally feel it, it’s intensified, compared to how it would have been if I had just allowed it to come through naturally.

I’ve felt everything that was happening, even when we were making the record. My producer Chris Coady is truly an angel. He’s not only a genius producer, he’s someone who can be with you when you’re in a fragile state, or when you’re in a vulnerable state. That’s why he’s so great.

Did he do anything in particular to help?

Part of it was that he was open to sharing with me a lot of his own experiences, and giving me a little more perspective. It made me feel more connected. The majority of making the record was just me and him. We brought in a drummer and bass player to play on certain portions of the record, but 95% of the record, I played. I do play drums and I do play bass, but specifically for this record, I wanted to have pros. I’m an amateur. So most of the record was me and Chris.

So his willingness to have conversations with me about everything I was going through was really great. Also there was just moments—like, one day I felt like I had a knot in my throat, like you have when you’ve been crying, or you feel like you’ve been crying. We were supposed to record vocals, and I couldn’t do it. I couldn’t sing. He was so understanding.

Does this album have a thesis statement?

So what does your mom think of the album?

She loves it! She thinks that it’s ‘The One.’ Which is a sweet thing to say, considering it’ll be my eighth record over the course of various projects. I love hearing my mom’s perspective on my music career. One of my favorite moments with my mom and my music was when I went on tour with The Zombies. I was opening and playing solo. I thought, ‘If there were ever a tour that I would invite my mom to come with me on, it would be this.’ She loves The Zombies—that was her era. It was so funny, everything she looked at: The star with my name on the door, the catering era. She would look at me and say, ‘This is just like Almost Famous!’