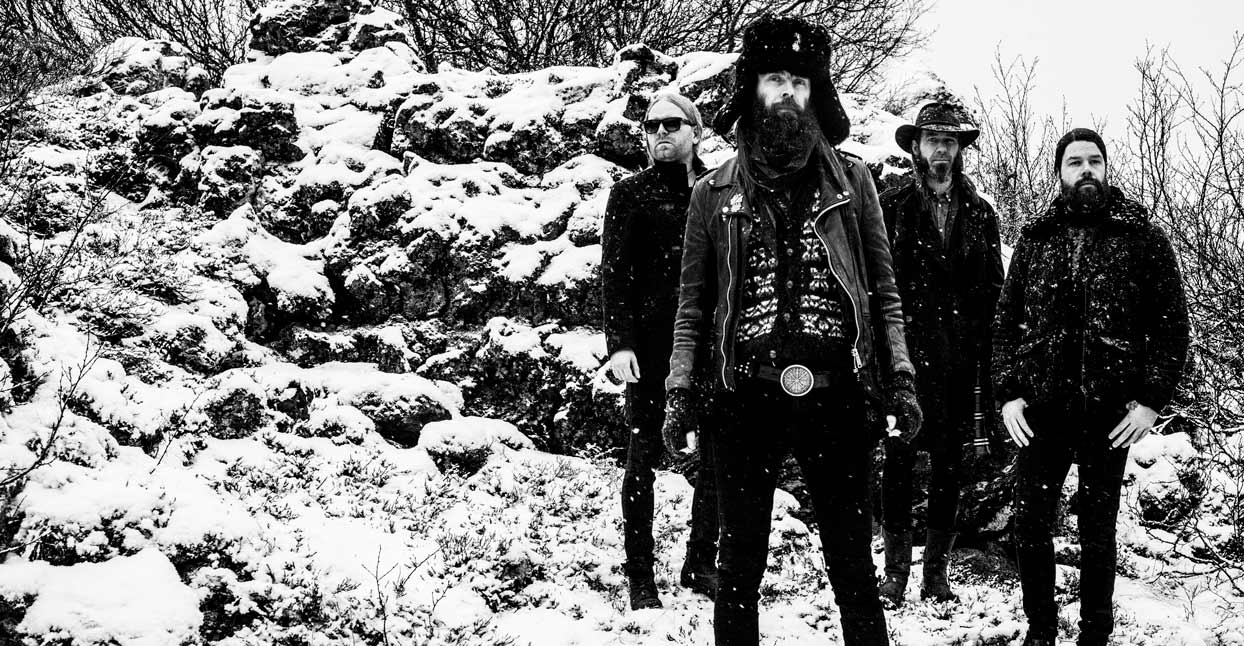 Iceland’s Sólstafir have been in the heavy music scene for over 20 years now and, with each new release, their storytelling skills have become more focused. They’ve also refined their approach, creating music that leans more towards soundscapes than capital-M metal. In 2014, a very public split with their drummer gave them a chance at rebirth. They returned to their homeland to regroup, toured with an orchestra, and set to work on capturing the emotionally-harrowing songs that make up their new record, Berdreyminn.

We sat down with frontman and guitarist Addi Tryggvason on a blustery weekend in April to discuss Iceland’s new status as hard-music ground zero and Little Richard’s heavy-metal bona fides.

The title of the new album translates into English as, ‘Dreamer of Forthcoming Events.’ What do you see in your future?

Well, for now, I see you and me doing this interview for a while. But, you know, we needed a title, so we started bouncing around ideas and this one came up. On a personal level, I used to dream things—mostly people and connections—that would actually happen. And that was kind of scary, because I’ve never been the guy that believes in coincidences or fate. And, I was dreaming things that—are you kidding me!—they happened. When you say something is a coincidence again and again, it becomes something more. It’s scary.

How long were you having these prophetic dreams?

It doesn’t really happen today. It was mostly in my late teen years. I was dreaming about people that I hadn’t seen in years, and the morning after, I would bump into them in the streets. So I could relate to the title on a personal level. But there’s another side to it. If you changed it to ‘Daydreamer of Forthcoming Events’—well, we had struggles within our band, and people thought maybe we shouldn’t continue. When we thought about how to fix it, our heads went in all sorts of directions. I’m not saying I saw this coming, but it wasn’t unexpected.

That was solved by switching drummers, if I recall. Did that change the way you compose?

It didn’t really change the method, but it absolutely changed the chemistry. About 10 years ago, we became primarily a touring band, and when you do that, you find it hard to get time to actually sit down and write. So on the last three albums we sat down for two or three months and just found time to get it done—show up every day at 10 in the morning and find time to write, away from jobs and families.

We had a chemistry that was very ‘us’ for about 15 or 20 years, and all of a sudden, we’re doing something new. It’s like, if you’re dating someone, the sex life will get better 10 years down the road because you work together.

What changed about the chemistry when you’re writing?

Well, I guess the new guy is never going to be as confident as his predecessor, you know? We knew that we got along well on a personal level, and that’s huge. At this age you can’t put a price tag on that. Our drummer is a very skilled musician all around. We knew about his capabilities. But, you know, when you’ve been together so long, the magic is about writing a song without talking or without even opening your eyes. You just trust the magic between each of you that you can capture. You just play for hours, and you get deeper and deeper into it, like a trance. That’s the magic of being in a band.

Yeah. We never come up with something static. Certain people have parts or ideas. It’s never about someone showing up with a song and handing out parts. So, sometimes we are bored and write a song in a day, and sometimes we spend tedious months working on a single bridge to a track.

I wanted to talk about Iceland. You guys seem very isolated up there. What do you think has changed about the world’s concept of Iceland? Because the music scene has become much cooler, and you’ve been in it from the start.

It’s changed for sure. Ten years ago, the population was about 300,000, and an equal number would visit a year. Now, we have 320,000 people, and we have millions visiting each year. It’s no longer a secret place, you know? Back in the day, if I saw a guy in a Darkthrone shirt downtown, I would run and call my friends like, ‘We have to meet this guy,’ and we would run downtown. It was exciting because it was validation that there are more people like us in the world.

Funny story: I live right downtown in the capital and I’m getting out of the shower—I have a towel on, like, half-naked—and I’m on the phone, and I look outside, and there’s a tourist with a Sólstafir beanie on his head. I almost knocked on the window and waved. It’s just such a different time now. Now, if you want to get what Iceland was like 15 years ago, you have to head out to our islands.

You know, the Sugarcubes were the first band in our punk-based genre that came out of Iceland and started touring back in the late ‘80s. Actually, Eddie Vedder was a huge Sugarcubes fan, to the extent that he was the one picking them up at the airport. But then Sigur Rós came along and Björk went solo. There were no metal bands. It was just us. So, we were still underground. The focus had always been on Norway, and maybe we had an inferiority complex back then. But now, every damn label is here in Iceland, looking at black metal bands.

To what do you attribute that?

I would say that the music here is actually quality. I don’t think people would waste the resources if the music was crap, and it was only the country that was the draw. It’s a lot easier now for a band to go touring. Back in the ‘90s, it was very difficult for us to leave and get exposure. Now, every band here makes an album and goes on tour. I guess we—and I hate to say this—but maybe we had something to do with it, because when you grow up in an isolated place and you see another band getting out there and having success, it gives you a bit of a boost.

You guys had zine trading and cassette culture before the Internet, right?

Oh, totally. Our demo, actually—we would go into a place that did audiobooks for blind people, and I would drop off our tape with a blind guy, and he would do a pressing of cassettes for us. We all had P.O. Boxes, and that’s how tape trading happened.

So here’s a question somewhat related to the title of the new record: What language do you dream in?

Latin? No, come on. I dream in Icelandic, mostly. At certain points in my life, I have tried to think in English or Norwegian. I even dreamed in Scottish for a while. The only thing that actually changes for me abroad is my accent. Like, I try to speak Scandinavian with a Norwegian accent when I’m in Norway. Icelandic is my most expressive language. I’ve had a foreign girlfriend, and arguing in your second language is awful. It’s just too difficult.

Does that translate to composition?

When we started the band, we sang exclusively in Icelandic. Then we did a few albums in English, but we ended up swinging back to Icelandic. I’m more of a rock ‘n’ roll kid at heart. Slayer and Thin Lizzy are my thing. I miss not singing in English because that’s the language of rock ‘n’ roll. No one will argue that it’s Italian or Swedish, you know? I mean, Little Richard would have sounded great in any language. Little Richard, Chuck Berry—I mean, they were just the best. Little Richard, his sheer power. It’s not Elvis, you know? He was a bit of a screamer. He was an outcast: A gay, black male singing rock ‘n’ roll gospel songs. It’s wild! He’s almost, like, early heavy metal.