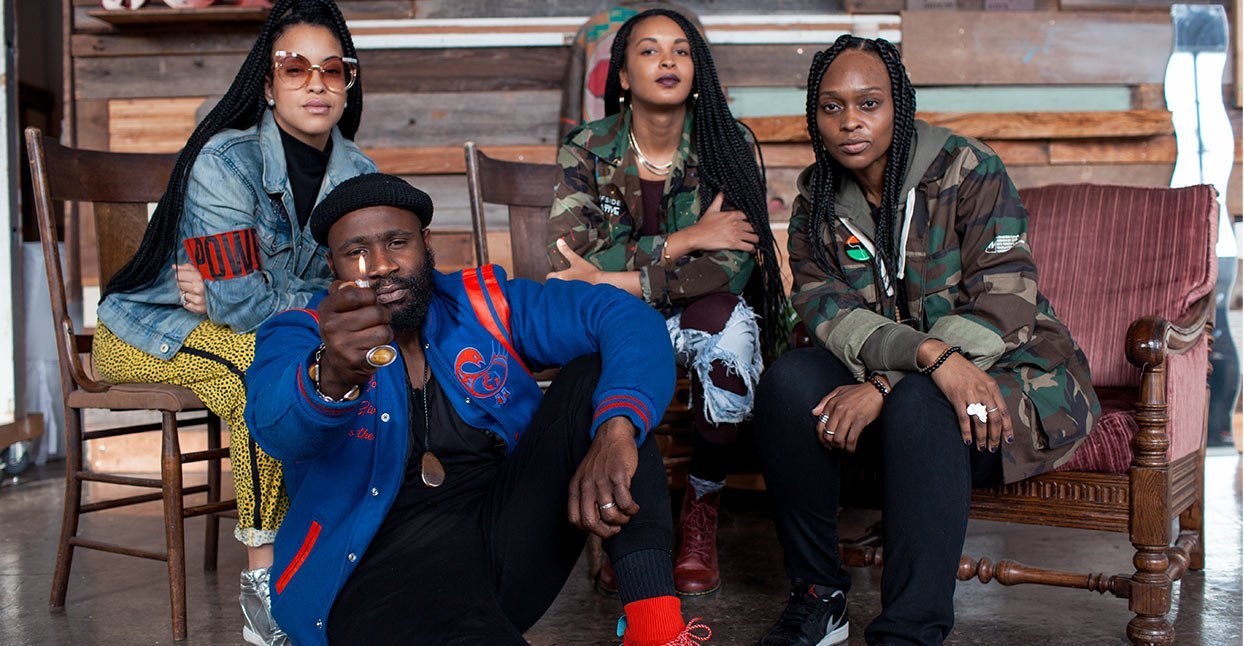 Before it was the final song on The SOL of Black Folk, the debut album from Oakland group SOL Development, “Source of Light” was a teaching tool. Karega Bailey and Felicia Gangloff-Bailey wrote the song in 2011, before they were married; four years later, Gangloff-Bailey and Brittany Tanner began teaching it to their kindergarten students at Roses in Concrete Community School in Oakland. They came up with hand motions to accompany the lyrics. When they sing, “It can be a dark world sometimes,” the students’ hands would first flutter down, then above their heads. And when they sing, “But don’t be afraid to be a source of light,” the students would spread their hands wide. Physically, it’s a small gesture; paired with the song’s lyrics, it becomes empowering.

“We teach our students about speaking up when you see something on campus,” says SOL Development member Lauren Adams. “If you see something that doesn’t make you feel good in your spirit, or in your energy, say something. And if you can, take the next step—do something.”

Like the title of the song, the “SOL” in SOL Development also stands for “Source of Light,” a reflection of the way the group—who are not only musicians, but teachers and activists—hope to inspire strength through community-building. Their approach is three-fold: Their unflinching R&B and hip-hop songs consciously draw on their home city of Oakland’s long history of black American power and protest, from the Black Panthers to Black Lives Matter. The members of SOL Development helped open Roses in Concrete four years ago; the school’s name and mission is inspired by a book of poetry by Tupac Shakur. And they also have a partnership with BE-IMAGINATIVE, a healing circle for mothers who have lost their children to gun violence. In the face of police who often fail to serve and protect people of color, SOL Development insist on their own self-worth.

Then in June 2014, Bailey lost his older brother Kareem Johnson to gun violence. As he reveals in the song “Nobody,” he had to talk himself out of retaliating: “Took the bullets out of the gun and thought about my wife / If I can help it, she will never have to bury me.” Three days later, he performed at a Juneteenth festival with Adams, Gangloff-Bailey, and Tanner by his side. “My SOL Development family was there to help me make that performance,” Bailey says. “It became very clear to me that we were together to help each other carry something much bigger than music.”

One year later, SOL Development relocated to Oakland, when Roses in Concrete hired Bailey as its dean of culture, and the group’s other members as teaching artists. In 2016, SOL Development began work on The SOL of Black Folk as residents at the Oakland creative space Zoo Labs. While there, they wrote “Helicopter,” where the image of a police car’s rotating red-and-blue sirens serves a focal point, stressing the ways that being a black American in an age of pronounced police brutality feels like living under constant surveillance. But when they proposed “Helicopter” to Zoo Labs as Black Folk‘s lead single, the idea was met with resistance. “The people at Zoo Labs at the time said, ‘We don’t get it,’” Gangloff-Bailey says. “We tried to explain, ‘You’re never going to get the black experience.’ They said, ‘Well, you have to make us understand it.’”

Days later, Tulsa, Oklahoma, officer Betty Shelby fatally shot Terence Crutcher after another officer, who was flying overhead in a helicopter, identified Crutcher as a “bad dude.” “Helicopter”’s final version samples that audio, before clanging pianos and searing electric guitars go off like emergency flares. “All the people who we were going head-to-head with about this record and about our narrative were like, ‘Oh, we get it,’” Gangloff-Bailey says.

Even though that incident may have convinced Zoo Labs of the urgency of the song’s message, Black Folk rigorously details the ways in which tragedies like these have been in plain sight for years. “She Complied” is a delicate hymn-turned-course corrective to The New York Times’ identification of 18-year-old Michael Brown as “no angel.” Adams’s lilting voice mourns Brown, Crutcher, and Sandra Bland, treating them as family lost (“Got a father up there in the big blue sky”). The aggrieved “No Indictment,” which is lit up by ghostly backing vocals and the sound of gunfire, serves as a grim punctuation of the album’s themes, its lyrics decrying the ways officers go unpunished, while people of color are repeatedly profiled. “Your skin is your conviction,” Bailey angrily raps.

The anger feels justified. But it’s also the reason SOL Development is driven to empower their communities to become catalysts for change. It’s also why Black Folk needed to end with “Source of Light”—now fleshed out in a twinkling, neo-soul arrangement. SOL Development’s members have seen firsthand the way the students who learned the song in kindergarten had become fearless performers by third grade. (One of them even joined the group onstage at last year’s Black Joy Parade to help sing the song.) And they also realize the ways the song may help to empower adults who didn’t grow up singing it in school.

“If you’re tired of dealing with white supremacy and racism, pop in the SOL Development album, and know that these folks got your back, and we’re all fighting together,” Tanner says. “It’s the same as inspirational music, but this is targeted toward black and brown folk—to inspire them, and to let them know that they are not alone.”