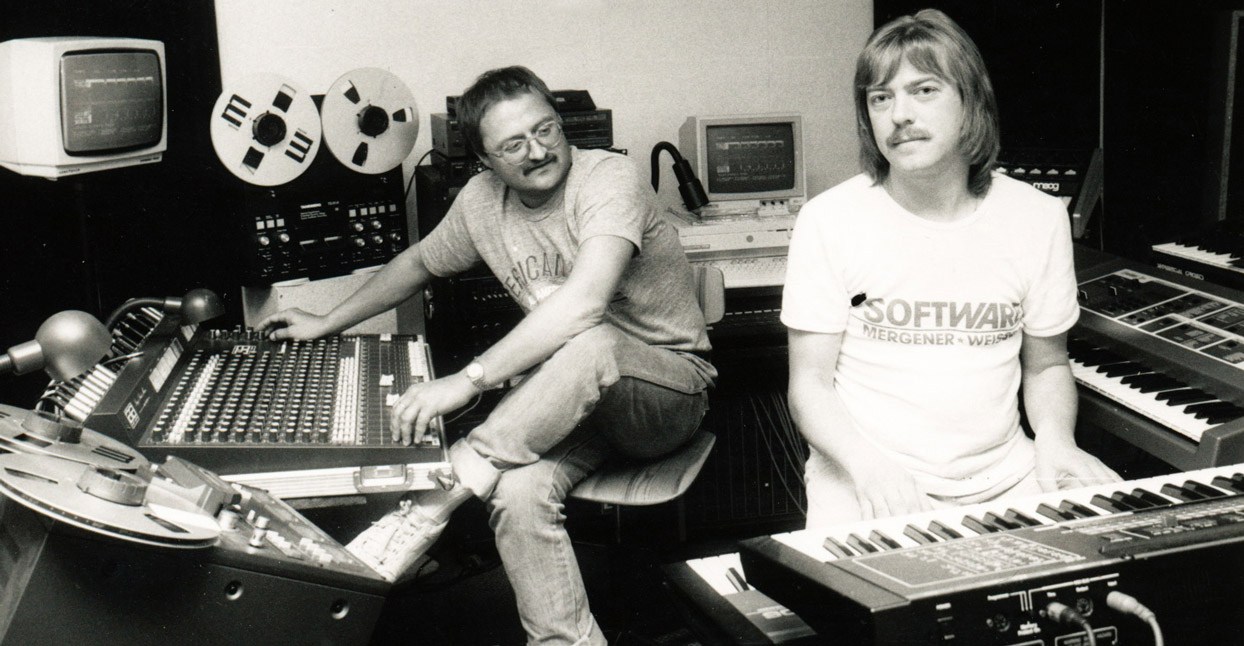 Digital-Dance is an obscure 1988 LP from the little-known (at least in America) German duo Software. Released at the time by the cult label Innovative Communication, the record is a collection of leisurely electronic instrumentals, drenched in nostalgia and indebted to ambient and downtempo soundtrack work.

Save for its urgent title track—a brisk, no-nonsense throwback to early ’80s industrial synthpop—and the closing song “Waving-Voices,” Digital-Dance is mostly dedicated to capturing one of life’s most curious phenomena: the way time seems to slow down during vacations, particularly if that vacation is in a tropical location.

Oceanic sound samples, like lapping waves or keening birds, crop up throughout the record, and Digital-Dance‘s song titles are deliberate nods to seaside scenes. Both “Sea-Gulls-Audience” and the multi-part “Oceans-Breath” incorporate mournful saxophone and dreamy synth textures, the former recalling the hazier parts of 808 State’s “Pacific.”

The album sets the mood immediately, opening with the addictive “Island-Sunrise,” which has become a vaporwave touchstone. It’s easy to see why: Thanks to a taffy-pulled tempo, the song feels like it’s suspended in deep space. Syrupy synthesized strings, 8-bit keyboard whimsy and occasional percussion sizzles—percolating woodblocks, hissing rattles, cautionary chimes—create an alluring and narcoleptic atmosphere.

And now, almost 30 years after its original release, 100% Electronica record label—home of the Australian vaporwave phenomenon S U R F I N G—is issuing a limited-edition vinyl pressing of Digital-Dance, along with a host of other Software titles, available digitally for the first time.

The story of how 100% Electronica came to reissue Software’s catalog is one of serendipity. Clanton first discovered the group randomly, while doing one of his “favorite things” on YouTube: cueing up a song to listen to, then letting the platform’s algorithm serve up random videos.

This musical consumption model also happens to be popular in vaporwave circles, because YouTube is so adept at facilitating musical discovery, Clanton says. During one of Clanton’s listening sessions, a video for Software’s “Island-Sunrise” entered the rotation. “I was like, ‘Whoa, who made this? This is sick,'” Clanton says. “And it turns out that it’s this obscure German group that hardly anyone in America knows about.” He hunted down a physical copy of Digital-Dance, which was a bargain back then: “I think I got it for, like, $20 on eBay.”

In a twist of fate, Clanton believes the particular “Island-Sunrise” video he encountered was uploaded to YouTube in January 2011 by Ryan M Todd, a musician who runs the labels Going Home and Universal Cave. A fan of Software’s label, Innovative Communication (which was founded by Klaus Schulze), Todd says he’s “just somebody who’s been obsessed with synthy records for the past 18 years.” In fact, he initially uploaded “Island-Sunrise” to YouTube simply to “fill a void,” since the tune wasn’t available online at the time.

The way Todd discovered “Island-Sunrise” was itself “a nice little moment of synchronicity,” he says. In October 2009, a friend recommended he pick up Software’s Digital-Dance LP while he was visiting Germany. That same month, Dâm-Funk played Robotique, a Philadelphia party at which Todd used to DJ. “When the night was over, he handed me a CD-R mix called Chart Toppers, and ‘Island-Sunrise’ was the closing track,” Todd recalls.

As it turned out, Chart Toppers was a mixtape put together by Dâm-Funk and Stones Throw’s James Pants. “I included it on my portion of the joint mix because it was a good downtempo last song after a mostly uptempo set,” Dâm-Funk says. “Almost like music for walking to your car, after a long night at the club.”

The funk aficionado discovered the song while on tour in Europe in 2008 with James Pants, Peanut Butter Wolf, and Mayer Hawthorne. “One of the things we’d do on our downtime was dig for records in shops, pretty much every city we’d pass through,” Dâm-Funk says. “At one particular shop in Berlin, Germany, we went to, I went into the Prog section. I was keeping an eye open [for] anything on the label Innovative Communication.”

Digital-Dance‘s album cover caught his eye, thanks to its “very mid/almost late ’80s art,” he says. The music was even more captivating. “I dropped the needle on it at the listening station, and boom! I was immediately filled with audio bliss when ‘Island Sunrise’ began,” he recalls. “Snagged it that day, and that’s the story.” Since discovering the song, Dâm-Funk says he’s become a Software “appreciator” and picked up more of the group’s records.

This feeling of “instant connection” is a common reaction to the song. Todd has uploaded obscurities and curiosities before, but says “Island-Sunrise” has received an unusual amount of attention. That’s no exaggeration: As of late February, the video had amassed over 443,000 views and hundreds of comments. Todd’s not sure where the interest is coming from, although he suspects a vaporwave subreddit could be one source. “The comments come in waves, so it’s likely getting reposted someplace that I don’t lurk,” he says. “It’s funny, at least a few of the commenters appear to be vaporwave celebrities, so I’m sure that’s part of the draw.”

The song’s “hypnotic, dreamlike, atmospheric” feel also makes it distinctive, he says. “All the elements of a danceable track are there, but totally immersed in molasses. It feels like a record pressed at 45rpm that somebody accidentally played at the wrong speed.”

To Clanton, listenability makes “Island-Sunrise” appealing to the vaporwave community. “To someone who’s hearing it for the first time, it’s a really good gateway drug to these long instrumentals,” he says. “That’s another trend in vaporwave: All of the hottest artists are making these really long instrumental tracks.”

So, Who is Software?

English language information about Software is scarce, save for Wikipedia, a brief AllMusic bio, and scattered fan websites (including one that hasn’t been updated since May 1998). Still, principal members Michael Weisser and Peter Mergener have detailed personal websites in German—and the former is more than willing to answer questions about Software, which is considered to be a project rather than a band, and is predicated on possibilities rather than limitations.

“We created brand-new sounds, spheric sound-scapes and surprising sequences, always with brand-new equipment in wide hierarchised stereo-space,” Weisser says. “We tried to create new sound-galaxies, and only our friend Klaus Schulze has been a musician going that way.”

Software originally formed after Mergener contacted Weisser upon reading the latter’s science fiction book, SYN-CODE-7. “In that novel, I described the future of music created by computer-based laser-stimulation of protozoans,” he explains. The pair joined forces and released several records under their own names, starting with 1984’s Beam-Scape, before adopting the Software moniker, starting with 1985’s Chip-Meditation.

Software dissolved in 1998. During its career, performing live wasn’t the duo’s “priority,” Weisser says—”We were satisfied with the unexpected great success of our music-albums, and we did not really need the applause of a live audience”—although Software did present concerts at planetariums in Bochum and Stuttgart and in art museums. A university performance was even broadcast live by the Cologne-headquartered public radio network WDR.

From an artistic standpoint, Mergener and Weisser were on the same wavelength, and had a symbiotic relationship. “Our basis is the same—[we’re] willing to combine the counterparts of emotion and ratio, of high-tech and soft touch,” Weisser says. Software, he says, is a “mixture of ideas: curiosity, high technology and feeling.” The project’s division of labor was also equitable. Mergener and other collaborators handled the musical side of things, while Weisser contributed artwork, futuristic concepts and a hunger for cutting-edge creative statements.

However, Software “has always been more than music,” Weisser stresses. “It was [fortunate] that Peter was the musician and I was the artist [experimenting] with new media, on the border between analogue and digital worlds. We combined computer-music with computer-graphic, videos, holograms, and high-tech-poetry. That is the way I work [even now]. Software is a work of art, always taking a step forward.”

Weisser continues to embrace a multi-disciplinary approach to digital media in his work. His YouTube channel features, “a selection of aesthetic proposals,” as he terms them, including intricate clips focused on combining QR codes, a favorite subject of artistic experimentation, with music, video, and poetry. This expansive worldview is very much aligned with Software’s approach and execution.

“‘Free your visions!’ has always been our message,” Weisser says. “While listening to Software’s [music], be inspired creating your own identity.”

As the years progressed, demand for Software albums far outstripped supply, partly because the group’s records were collectible physical artifacts, with an emphasis on the “art.” “Software always had an engaged fan community,” Weisser says. “A lot of people around the world told us that Software productions, with the large collection of famous computer-artists on the covers, with substantial colour-booklets, with holograms, picture-disc and original computer-chips, are treasured as documents of digital art.”

As the popularity of “Island-Sunrise” grew, original physical copies of Digital-Dance started commanding high prices online. Clanton recalls posting a “ridiculous” Instagram photo of himself holding Digital-Dance that caused quite a stir. “People were like, ‘Whoa, how did you get that? That’s so awesome. I love this record. I want that record,'” he says. “And then I was like, ‘Why don’t they just get it?’ And that’s when I realized that it was going for over a hundred dollars, and was basically inaccessible. It seemed like a prime candidate for repressing. There’s such a demand. It just had to be done by somebody—if not me, someone else.”

Clanton wants 100% Electronica’s reissue campaign to make Weisser happy, although the artist himself has his own hopes for what might happen once Software’s music is available to a larger audience. “It is not really the success of selling that is important,” Weisser says. “The real value is scoring new contacts to creative people for creating new ventures.”

Being in the vaporwave orbit puts Software in a good position. Not only are the project’s aesthetics aligned with the movement’s approach to music, but Software’s insistence on staying ahead of the curve ensures its records sound remarkably fresh today. No wonder “Island-Sunrise” ended up blending in so seamlessly with the modern world.

“This is the original sound that people are trying to copy now,” Clanton says. “I suppose it was popular in the day—I was born in 1988, so I can’t really speak to that. But now it’s come back around again. It sounds cool. And it’s awesome. I love it.”