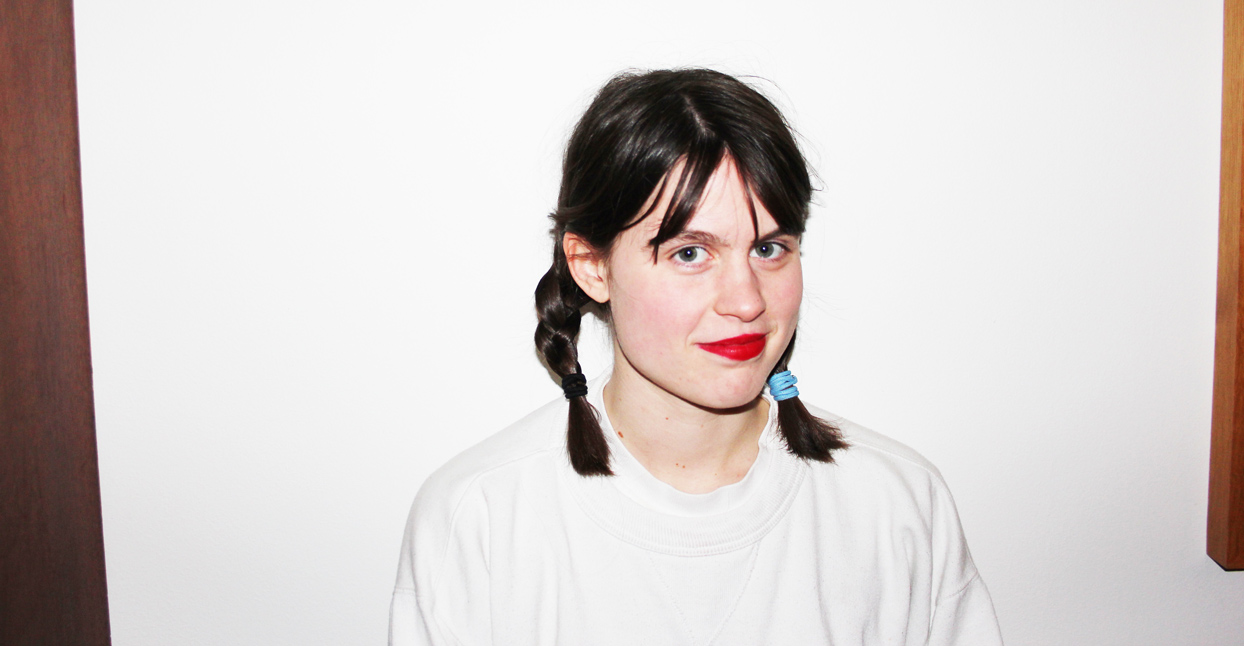 In 2015, Sweden’s Åsa Söderqvist was nervous about what people would think of her music. She uploaded her self-titled solo debut EP (under the potentially off-putting moniker ShitKid) to the internet, and forgot about it for months. In that time, she racked up a lot of listens, particularly for her song “Oh Please Be A Cocky Cool Kid,” a two-minute, drum-machine-driven, stream-of-conscious pop-punk song.

The song’s positive reception gave Söderqvist the confidence to reach out to Stockholm-based PNKSLM, a grass-roots label putting out music from the stranger side of Sweden’s new music scene. The label remixed and released her EP in 2016, and followed with a second one this year. Now, PNKSLM will release ShitKid’s debut full-length LP, Fish, which we’re premiering today. Not much has changed in Söderqvist’s music since that first EP. Her music is still a blended puree of punk rock, alt-country, and pissed-off pop, set to caffeinated drum machines. Its songs are overwhelmingly fun—liberating, and confident in their own strangeness.

Given Söderqvist’s limited experience as a musician prior to starting ShitKid—she played three shows with two different bands—there is also an innocence to her music, a sense of self-discovery emanating from the songs that make Fish an irresistible listen. It sports a cover that looks like a Lynchian take on old-timey country album, but has a title, Fish, that no actual country singer would use. We spoke with Söderqvist about her eccentric, infectious sound.

Listen to Fish in full exclusively at Bandcamp Daily:

Your EPs are short blasts of oddball fun. How did you approach your full-length?

I did the exact same thing. A lot of the songs on the album were made for the EP, but I didn’t like them. I fixed them up a little afterward, in GarageBand. I’d maybe use the verse that I already had recorded, and redo the refrain, rearranging it a little. Of course, there are some new songs as well. I wanted to make a full-length, so I just scrambled all the stuff together. The first and last songs are kind of similar. Two are about the tropics. And two are just rock. They kind of follow in that order. I used the same instruments for all of them, they still have the same sound, I think. Same drum machine. Everything.

Do you feel like your songs come together during the editing process?

Most of the songs come together kind of at once. ‘Cocky Cool Kid’ was made in one night. ‘Never Seen a Girl,’ the first song on the album, was done in one live recording. Some songs are super quick. Others, I process a little. I put effects on them, I change the volumes. I send them to my friend, Simon Skeleton, and he mixes the finished ones. He’s added some bass and weird noises. It makes it a little more spacey—fat sounding. Mostly, I improvise the singing. So, if something made me angry that day, maybe I sing about that. It’s easier to write about things that make you angry.

How do you think you fit in with the bands on PNKSLM, and the “weird music” movement happening in Sweden?

I don’t think most of it is weird, actually—I think I’m probably the weirdest [artist] in Sweden right now. It’s just rock, I don’t think it’s super weird. I wrote to PNKSLM ’cause I didn’t know of any other labels. Now, we’re really good friends.

I read that, as a kid, you were extremely shy. Your music has this odd confidence. Did you find that making music was a way for you to become less shy?

The main thing I’ve been shy about has been music. I was really anxious when we had our first gig with ShitKid. I had, like, three other gigs before. But it’s all been going really well. I just kind of let go while writing the music; I never want to record songs when somebody’s home, ’cause I hate people hearing when I’m recording something from scratch. I was living alone when I recorded all of these, so I could just sit and do whatever. I guess I am confident in other things than music. When I put the EP up on the internet, I totally ignored it for four months—the whole summer—because it was a huge thing for me to even put it up there. I knew that if I got one thing out, maybe it would be easier in the future [to release more]. That worked well. After four months of ignoring it, I sent it to PNKSLM. Two days after that, another record company called.

Why’d you name the album Fish?

I sing ‘fish’ in two of the songs. ‘Fish’ is a really great word. I’m scared of fishes, because they really wanted to eat the skin off my feet when I was in Asia. They were big as arms. They were fat, and they wanted to eat your dead skin. People were putting their feet in there to get some spa treatment. I thought it was scary. I have really tickly feet. So—not for me.

What about the cover art? I think it’s great.

I really love it. I wanted it to look like an old LP. I explained that to my friend Moa Romanova, who has taken almost all my press photos, and has made all the other cover art, and she made the perfect thing. I guess it’s very country. That’s what I listen to, so I see mostly those kind of album covers.

‘Cocky Cool Kid’ was the first one of your songs to get people’s attention. Is that song about you wishing you were part of the cool crowd?

No. It was just about a cute guy I saw at a club. I guess it’s mostly a joke. Like, the part of it where I would be, ‘Ah, be with me’—I guess that wouldn’t happen. Sometimes you feel, ‘Oh, you can do whatever to me ’cause you’re so beautiful. And I’ll still want you.’ That’s it.

You studied music a little bit in school, is that right?

I had an acoustic guitar, but it wasn’t very fun. Also, I was just starting to party, so I skipped a lot of school, especially my music classes. It was better going to the math lessons than the music lessons—it looked better. I mostly started that school ’cause I wanted to move away from home, and that was 40 minutes away. That was the reason I wasn’t excited to dig into music and become really good at guitar: I wanted to move away from home, then I wanted to skip school.

You had a punk band before ShitKid?

Yes. We had this punk band for one year, then the guitarist got pregnant, so we had to quit. We had one gig, which was good for my confidence, I think. I was really nervous for that one. I had two gigs with my first band before that when I was 15. Like, four or five people in the crowd, you know? Just a small gig. And then ShitKid.

Was there a reason why, after being in a number of bands you decided to start a solo project?

It’s much easier to record by myself, because people aren’t very enthusiastic. People skipped rehearsal because of headaches and stuff. It’s very hard having a band, unless everybody is very enthusiastic about it. That’s why most bands are either one person or two. It’s really hard to put everything together.

What else influences you besides punk and country?

I listen to a lot of pop—like, radio pop. I’ve always been listening to a lot of Britney Spears and Pink and Christina Aguilera. I think that has inspired my singing a lot.

Do you see yourself one day making more mainstream pop music?

I don’t know. There was a guy asking me if I could sing on one of his songs, which was more mainstream pop, and I’m not sure if I would do it. If I like the person who made the music, then maybe. I really like almost everything, so I guess it could happen. But I don’t know. I mainly like rock. I want to play rock and make rock.