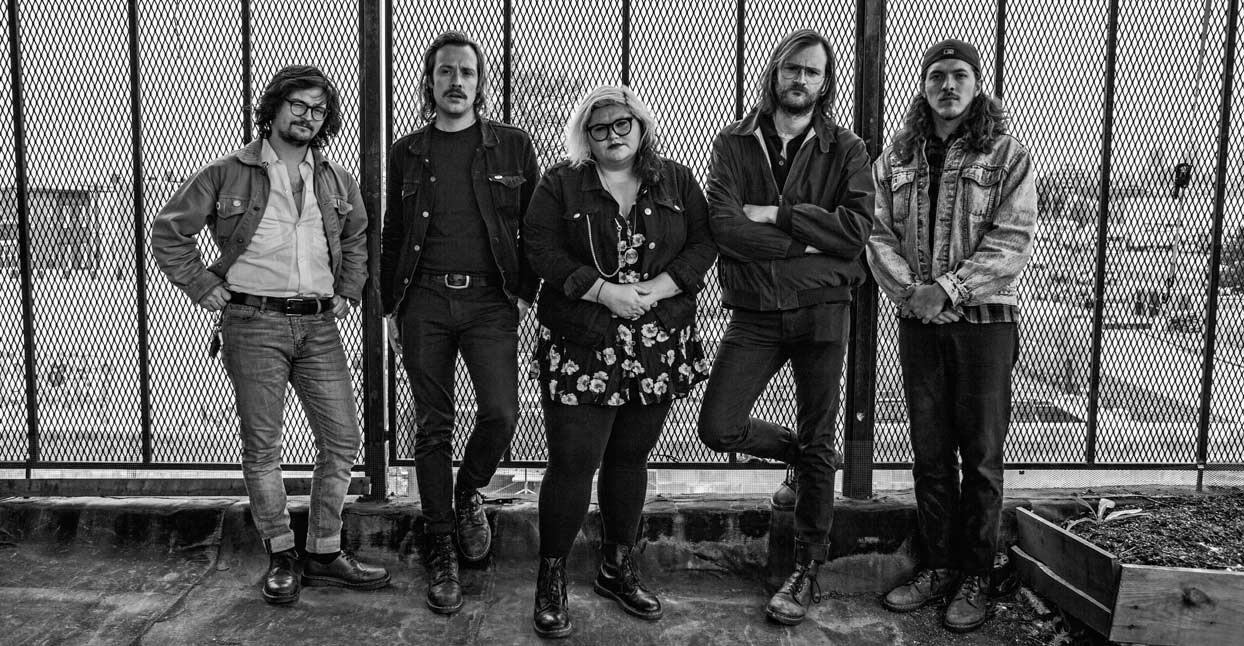 It’s been just over 48 years since the Stonewall riots, an event identified as a turning point in the gay rights movement in America. There were subsequent raids and protests during the late ’70s and early ’80s in Canada as well, with Operation Soap and gay rights activists who resisted against their provincial government. As a result, Quebec enacted legislation that protected from discrimination over sexual orientation. Not all movements net tangible results, and neither are those results a fix-all, but what they do demonstrate is that resistance and dissent can bring about change.

Organized, impassioned rebellion against oppression is an act of optimism—a belief that, in time, things can get better. That same spirit of hopeful resistance courses throughout Sheer Mag’s gritty rock ‘n’ roll.

From the first notes of the glam-rock strut “Meet Me In The Street,” which opens their new record Need To Feel Your Love (which, fittingly, contains a song inspired by the Stonewall riots), the Philadelphia band invites unity, dissent, and disorder. “When we walk together, it feels all right! Meet me in the street!” frontwoman Tina Halladay thunders, adding, “Come on down and get in the mix.”

Need To Feel Your Love isn’t glamorous; it’s smoky and mud-smeared and loud and uncomfortable. A rush of rage and volatility collides with breezy, lustful abandon in songs like “Just Can’t Get Enough” and “Pure Desire.” The flushed exuberance of “Need To Feel Your Love” butts up against the lonesome loathing of “’Til You Find the One.” Throughout, the songs feel like they’re in conversation with one another, keeping the bulletproof pop culture version of true love grounded in cold reality. Instead of escapism, Love presents life as a nuanced, shoulder-to-shoulder charge through both joy and misery. “A lot of our songs are those two focal points of life,” Halladay says. “This record zeroes in on it a little more.”

That dichotomy is partially due to the fact that Halladay and fellow songwriter and Sheer Mag guitarist Matt Palmer were at opposite ends of the emotional spectrum. “Every other time that we’ve written, Matt and I have been in the same place,” Halladay says. “I think because he’s in a positive place and I was not, that’s the splintering. Now we’re two different people in two completely different places, coming together.”

The notion of “Coming together” is the beating heart in Sheer Mag’s revolt. On “Rank & File,” Sheer Mag call on the comfort of friendship to “even the odds” against overwhelming despair. “It’s just calling on your friends and people close to you to share feelings with, and just know we’re not alone,” Halladay says. “I think that’s so important right now.” The sanctity of communion turns up throughout the record. “Love is the most important thing,” she says, before sighing, “That’s hard to do when everything around you seems like it’s falling apart.” In Halladay’s songs, Love isn’t presented as an antidote to oppression or fascism, but as an essential ingredient of resistance.

Throughout Love, Sheer Mag mix the struggles of the present with fragments of the past. After reading about the Stonewall riots, Palmer wrote “Suffer Me,” a reflection on the significance of the resistance. “There was one less boot pressing down on one less throat,” Halladay sings, over plucky guitar and bass. “To me, the Stonewall riots were a legitimate reaction to the horrifying anti-LGBTQ+ policies of the NYPD,” he explains. “At the time of the riots, people could be arrested for wearing clothes that weren’t typically associated with their perceived gender. I wrote the song as a show of support and solidarity for anyone in the queer community who feels harassed or suppressed by ignorant and homophobic policies.”

The song opens questions about the retelling of narratives that belong to marginalized people. “I tried really hard to be conscious of the fact that I’m a straight cis man attempting to depict the struggle of LGBTQ+ people in 1969,” he says. Halladay agrees. “It was a challenge for him to write from another perspective. He wanted to speak about it and do it justice without commodifying it or taking anything away from people.” In the end, Palmer decided to use the omniscient perspective as a way to avoid claiming ownership of the narrative. “I don’t have that much experience writing about perspectives different than mine,” he admits. “But I think it’s an important skill for a writer to have. And equally as important is the ability to take criticism and consider what intersectional perspective you’re writing from.”

Palmer also wrote the album’s closing track, “(Say Goodbye To) Sophie Scholl.” The ballad recalls the factual story of the titular heroine’s execution in 1943 for distributing anti-Nazi pamphlets in Germany. Scholl, a member of German resistance group The White Rose, was 21 when she was murdered by the state for daring to speak out against it. “I wanted to write about her courage,” Palmer says simply. If Scholl’s bravery is an inspiration, then her murder is a warning. “They didn’t want anyone to have plausible deniability regarding the war crimes enacted by their government,” he explains. “I thought there were a lot of parallels between the activism of the White Rose and activists of our generation: attempting to shed light on bleak subjects the public would often rather ignore.”

Palmer’s repurposing of historical events to create contemporary protest music are in line with the folk tradition of elevating the visibility of marginalized groups—something that struck him when he revisited Bob Dylan’s catalogue. “Many of the past injustices that are touched on in the political songs on Need To Feel Your Love really haven’t changed much in the decades since,” he says. “Legislation is still on the books, or is being introduced, that limits the rights of the LGBTQ+ community, and the state-sponsored murder of black people sadly persists.” But while his optimism for change is measured, it hasn’t vanished entirely. “Without being too idealistic, I do hope that some people will be interested in these stories enough to seek out their origins and consider the long history of leftist activism in the U.S. and around the world,” he says.

These stories, and Sheer Mag’s approach to music, emphasize the need for representation and visibility. Halladay knows this all too well; she speaks openly about the challenge of growing up without seeing a larger body like hers represented in media or on stages, let alone in a rock band. “Except for a few rare exceptions, like Missy Elliott maybe, I’d never seen a woman that looked like me in a band like mine,” she explains.

Though Halladay is wary of the idea of ‘the artist as spokesperson’ (“From what I can tell, a lot of times black artists are held to a higher standard,” she notes), the absence of body politics in music created a desire in Halladay to fight that feeling of alienation. “If I can inspire someone, or they can just see me and think, ‘Oh, wait—I can do this?’ I wanna be the best that I can because of that.”

Her presence is already making a difference, even among her peers. Ellen Kempner, who makes music as Palehound, calls Halladay “an instant hero.” Kempner fondly recalls her first time seeing Sheer Mag at a festival in France. “I watched Tina dominate the stage with this fierce, raw talent and undeniable sexiness that I had always known big girls were capable of, but have never seen acknowledged by the music world,” she explains. “Whenever I feel insecure on stage, I literally think about that show and try to channel her.”

Rejection of industry standards is often considered radical, but it’s actually a return to form. Rock ‘n’ roll, as popularized and made palatable for white audiences by musicians like Elvis Presley, sprung from decades of intellectual and creative labor by people of color.

“People of color and women started rock ‘n’ roll, and a lot of other genres, that were just taken over by white men and made into whatever they want it to be to work for them to get whatever power,” Halladay says. “Shitty band dudes who couldn’t get power in the fucking boardroom… use [music] to exploit women.” But, true to the band’s balance of nihilism and idealism, Hallady also senses change in the air. “I think people are taking it back,” she says. “It’s like, ‘You can’t have this, too.'”

In the end, Need To Feel Your Love is a big-hearted molotov cocktail of unionized dissent, an album that proves that unity and resistance aren’t opposing ideas—but that they strengthen one another. If they hit any barriers, they’ll bust through ’em, arm in arm. As Palmer puts it, “If there’s some asshole ‘standing athwart history yelling stop,’ sometimes you just have to run them over.”