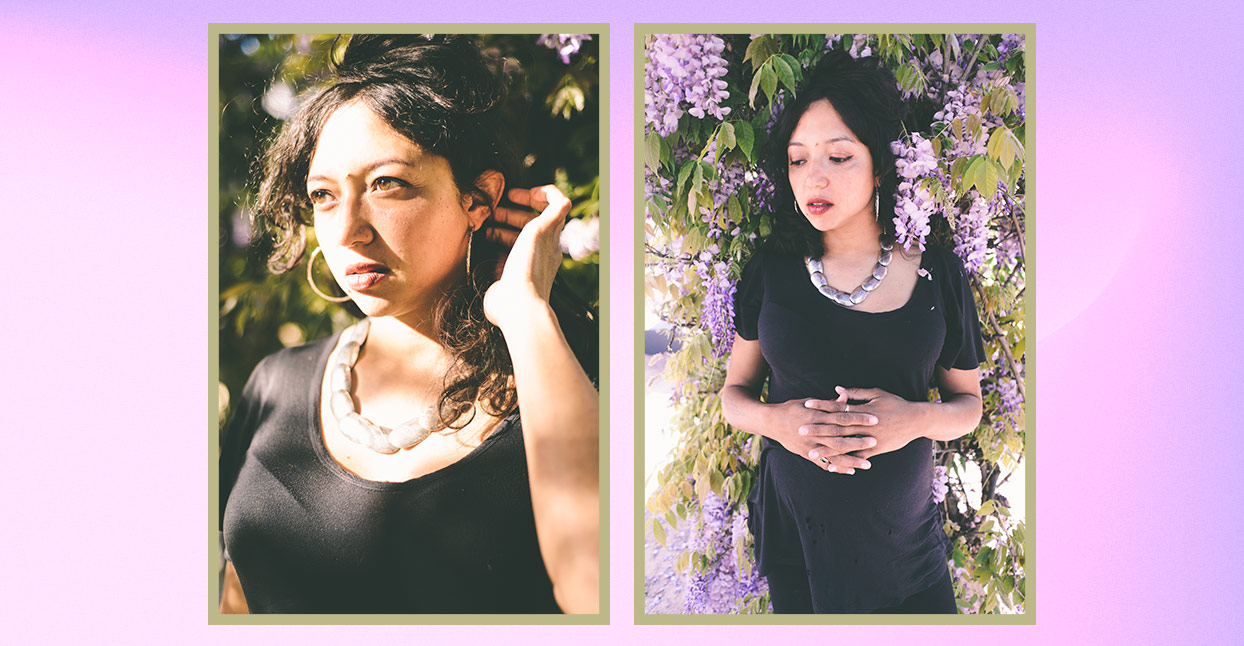 Cleveland’s hushed set was worlds away from the epic guitar rock she makes in her main gig, fronting indie surf luminaries La Luz, whose dreamy 2018 album Floating Features landed at number four on Bandcamp’s Top 100 Records of that year. Using only minimal instrumentation—Cleveland on acoustic guitar, partner Will Sprott on synthesizer and backing vocals—she entranced the crowd with the tender beauty of her psych-folk songs, and the near flawlessness of her performance.

Throughout her career, Cleveland has used her songs to explore the experience of existing in dreamlike states where reality is heightened, experiences fractured, and emotions amplified. On Night of the Worm Moon, Cleveland uses the acoustic guitar itself as a way to push into these liquid realms; her gentle fingerpicking patterns create a soothing, meditative state, while her lyrics brim with vividly psychedelic, often supernatural imagery.

There’s a deeply human element to Cleveland’s solo material that at least partially stems from the intuitive relationship she has with her guitar, the way she uses it to both access and express her deepest hopes and fears. It’s enchanting on record, but live its songs are breathtaking. The reverant response to her Oakland performance reveals her to be an artist with the rare ability to emerge from these mysterious interiors with songs that retain the intimacy of their creation, while unfolding in ways that ring universally and emotionally true.

Before the in-store performance, I spoke with Cleveland about writing and recording Night of the Worm Moon, why she prefers to make music with other people, and the challenges of playing electric guitar in a rock band when you’re six months pregnant.

The simplest way of thinking of it is: I start on acoustic guitar when I write these songs and start on electric when I write for La Luz. With La Luz I’m sort of thinking, ‘OK, there will be an organ here,’ or ‘I want the drumbeat to sound like this.’ All of that gets shifted around when La Luz gets together to work out the songs, but I sort of try to plot out the song as a whole and everybody’s parts a little bit ahead of time. With this, it’s simpler. I kind of do everything at once, I’m not planning overdubs, though I do some later. And fingerpicking versus playing with a pick is a lot different. Fingerpicking feels more meditative to me so I feel I go to a more introspective place lyrically and thematically when I play acoustic guitar.

I just really love the sound of other instruments. Like, I really love pedal steel, and I wanted pedal steel to be on this album. I really wanted there to be flutes and strings, but we didn’t have any flutes, so there’s a lot of flute noise from synthesizers. I kind of fleshed it out without thinking too much about it. For my next solo record, I want to have nothing but guitar and vocals, and do a true solo record.

You’re a visual artist as well. How important are visuals when it comes to your records? The album art for this one is really cool and ‘out there.’

It’s huge to me. I’m really glad that I asked someone else to do it this time, because I feel like, although I’m a huge fan of design, it isn’t really my strong suit. I love doing portraits, and that’s my thing as far as art goes, but I’m also into really amazing record cover designs. Half of the records I buy, I pick them up because I like the cover. I wanted to really go out on this one and get someone whose work I really admire instead of trying to figure it out myself. Ardneks is this really great Indonesian artist who I hired to do this cover art.

How did you find his work?

A friend of mine had shown me a poster he did for A Place To Bury Strangers, and I loved it. I wrote to Ardneks and asked if he’d do a European tour poster for La Luz. Then, when it came time to figure this album cover out, I wrote to him and I was like, ‘First of all, are you doing any other covers right now?’ I was kind of afraid this record would come out and there would be, like, five other covers by him. And he said no, not right now, so I asked him to do mine.

Did the songs feel different than songs you’d worked on before?

Yeah, they did. I think I wrote almost all of them in the time after we recorded Floating Features, but were waiting for it to come out. It was actually kind of a long time, but I think I wrote them within six to eight months. There was the influence of living in L.A. I was in a similar mental space as I usually am, where I feel like this weird loner in a big world, but in L.A., it was amplified. It’s such an isolating place. It’s kind of a surreal feeling, and I can hear that alienation in the songs. But they also feel very intimate to me. A lot of them I wrote right after my grandma passed away. I was really close to her, and I kept having these dreams where she would just show up and I could feel her love for me. I was loving to exist in the feeling of these dreams I was having, but I was also in L.A., with all that weirdness.

Did you know who you wanted to play on the record with you?

I knew I wanted to record it in Seattle, because I know so many great musicians in Seattle. That’s the place where I played music for the longest time, so I went back there. I knew I wanted to get Abbey Blackwell, the original La Luz bassist. She’s a great musician and a great improviser. I wanted to find people who are great improvisers because I didn’t want to take much time to record it. I wanted to go in with people who were like, ‘OK, I can see what you’re doing here,’ and just lay something down. I like the idea of intuiting the feeling of the song, rather than practicing it. I feel like I have to play with people like that because I don’t know anything about music theory or any rules.

When you started playing guitar did you start on acoustic?

I probably did because that’s what was in my house. I got good at it when I was living in L.A. for the first time—which was a long time ago, probably 12 or 13 years ago, before I moved to Seattle. I was living in the San Fernando Valley, and I was really lonely and didn’t know anybody. I got a banjo, because I had this idea that I was going to use this time when I didn’t have anything else going on to learn banjo. I don’t play much banjo anymore, but I got really good at fingerpicking. I think that’s when I also got good at guitar, when I really hunkered down and studied banjo for a while on my own with a bunch of books.

Do you still own a banjo?

Oh yeah! It’s a really cool banjo. I don’t know why I don’t play it anymore, but I just got really, really into guitar.

This record seems to be a little spooky. All of your stuff is kind of spooky, but on the title song here, you’re using a lot of actually scary imagery. Was that a conscious choice?

That track in particular just came from being alone in the house. Being a touring musician, you’re always surrounded by tons of people at all moments of your day. Then you go home, and it’s like you’re in this vacuum all of a sudden. All the air is sucked out, and it’s just you and your thoughts. I think that a lot of this record is written in that space, of having this first really extended break from La Luz’s hectic touring schedule. I was just like, ‘Whoa, what’s going on in here?’ I was trying to tap into that and follow a lot of private feelings.

Do you feel like that’s sort of reflected in the song structures and pacing of the record? It’s very meandering.

That would make sense. That’s sort of what my mind at that time would sound like, if minds had sounds—sort of meandering. There’s definitely a sort of a vibe that goes throughout the whole record, but it feels like a gentle motion.

You were mentioning in other interviews that Alice Coltrane and Sun Ra were big influences.

With Sun Ra, his influence on the album is less musical than sort of… just him as a person was really inspiring to me. I do listen to his records a lot—certain records, I don’t like everything. It’s kind of funny to throw that out there as an influence for the record, because I don’t think anyone would listen to this record and think I was listening to Sun Ra. I did rip off the title from him.

The video for ‘Don’t Let Me Sleep’ has some Sun Ra vibes, especially with UFO and the kind of space-traveller costume you’re wearing. What was the inspiration behind that?

It’s all filmed in my backyard. I live out in the middle of nowhere now, and it feels kind of like outer space. When you see space, it’s really quiet and there’s no people. I thought it’d be cool to shoot with really harsh light at night and make my backyard look like outer space.

Is there going to be another La Luz record before your next solo record?

I don’t know which will be first.

Are you writing music for that already?

I’ve been working on both, but I’m going to shift my focus to finishing up the solo album first, because I want to finish it before the baby comes. I think it’d be a nice artifact to have this record that I wrote entirely while I was pregnant. Motherhood doesn’t mean a lot to me right now because it’s not something I’ve ever thought of before. It’s not like, ‘I’ve always wanted to be a mom!’ So it’s been a really cool mystery, and I think it’d be cool to have a whole album written in this time when I’m like, ‘What’s happening?’ everyday. So I’m going to finish that, and La Luz is planning on getting together to work on new music after the baby is born.

Has been being pregnant changed the way you’ve had to play guitar, physically?

For sure. La Luz was playing shows up until last month and I was wearing the guitar really high, just in this really awkward between-boob-and-belly place, which is too small even still. It’s just, like, squashing everything. I didn’t really like playing like that, it feels awkward. It looks really cool when some people do it, but I did not feel cool. And you get really out of breath when you’re pregnant. I didn’t want to just stand there and I didn’t really know how to just stand there and play that music, so between every song I would just be like [taking deep breaths]. Then it was like, ‘OK, maybe I shouldn’t do this anymore.’