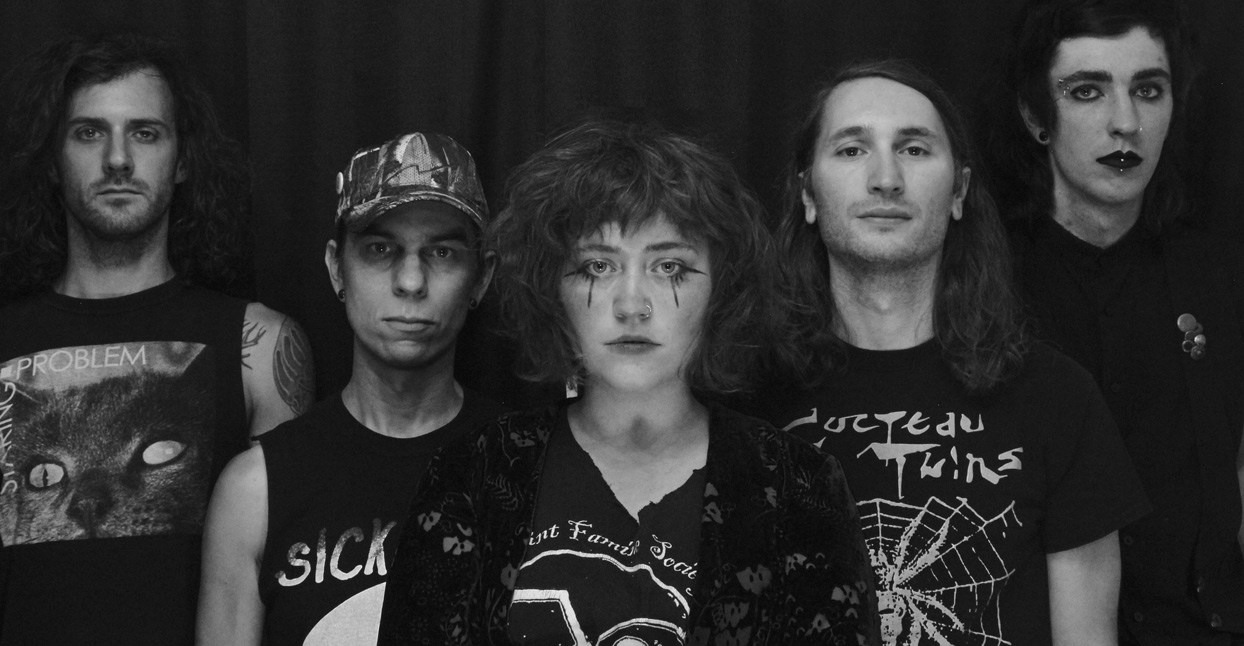 The five-piece goth band Secret Shame aren’t fooled by the majestic Appalachian Mountains that surround their hometown of Asheville, North Carolina. Despite its blue-ridged backdrop, the tragedy of reality is eating the city away from the inside. Like so many other areas in the United States, opioid addiction and its resulting death toll has engulfed Asheville. “[There’s] lots of pills—lots of really nasty stuff,” says Secret Shame vocalist Lena. “Things that are very bad for you.”

Dark Synthetics, a fitting title for their new LP, is an observation of the catastrophic effect these drugs have had on their community. “Since a lot of the album is about drug abuse I thought that it fit well,” lead guitarist Ryynikki says. (The band members go by their first names only.) “Outside of my apartment I would walk home and find people’s used needles all up and down the street. That’s a testimony to how prevalent injectable drugs are, which is sad. We have such prosperity of growth, with so many people investing in Asheville, but then on the corners you find people’s discarded needles, and people without access to healthcare.”

Secret Shame funneled their frustrations into their music. “It was like there was this pent-up emotion, and we would have band practice or play a show and it would all come out. I would be exhausted after every time we played, because I was yelling it out of myself,” says Lena. Drug abuse, domestic abuse, and mental illness—issues that are often left to be handled behind closed doors—are at the forefront of Dark Synthetics. “[They are] things I didn’t mean to write about, but that was all I was able to write about,” says Lena. “Everyone [in the band] was in a dark place, and we ended up writing really dark music.”

Since they formed in 2016, the music Secret Shame have made is, to put it simply, dark. But with such a small goth scene in the Appalachians, a place where punk and metal dominate, the group often find themselves tiptoeing between different underground communities. “I think a lot of our sound bridges genres. We’re too dark and theatrical for punk, but too punk for some of the goth kids,” says Ryynikki. “We don’t seem to fit well into anyone’s specific musical focus.”

As a result, Secret Shame thrive on the dissonance of not quite fitting in. They don’t require a U-Haul full of electronics—which is fashionable in the current goth climate—but instead rely on the brute force of their five members to fill all available space. With their cinematic intensity—which often calls to mind deathrockers like Christian Death or Rubella Ballet—Secret Shame have as much grit as gloom. The band thunder around Lena like a horde of bats, while her vocals embody both the ferocity of goth royalty Eva O and the expressive cadence of Sinead O’Connor or The Cranberries’ Dolores O’Riordan. Much like The Banshees could not exist without Siouxsie Sioux, there would be no Secret Shame without their frontwoman. “It feels like we’re there just to prop up what she sings, because it’s so powerful,” Ryynikki says.

The songs on Dark Synthetics gallop through their nightmarish lullabies on the back of heavily flanged guitars and propulsive punk beats. Lyrically, the band remain focused on dualities. On “Creature,” Lena sarcastically wails, “Societal falseties, consequences build our breed / It’s OK! I am fine! I feel so good all the time!” On “Storm,” with guitars that howl and hum, Lena sings, “It’s all bleak inside… It’s so cold, so cold.” Is it a surrender or a cry for help? There’s no resolution when the track fades to nothingness, just an empty silence. On Dark Synthetics, the tight grip of pain is almost palpable. And while there are moments that allow for a breath of air, the atmosphere overall is much too thick to provide sustained relief. The sorrows of existence have seeped deep into the band’s weary bones. Dark Synthetics is the antidote.