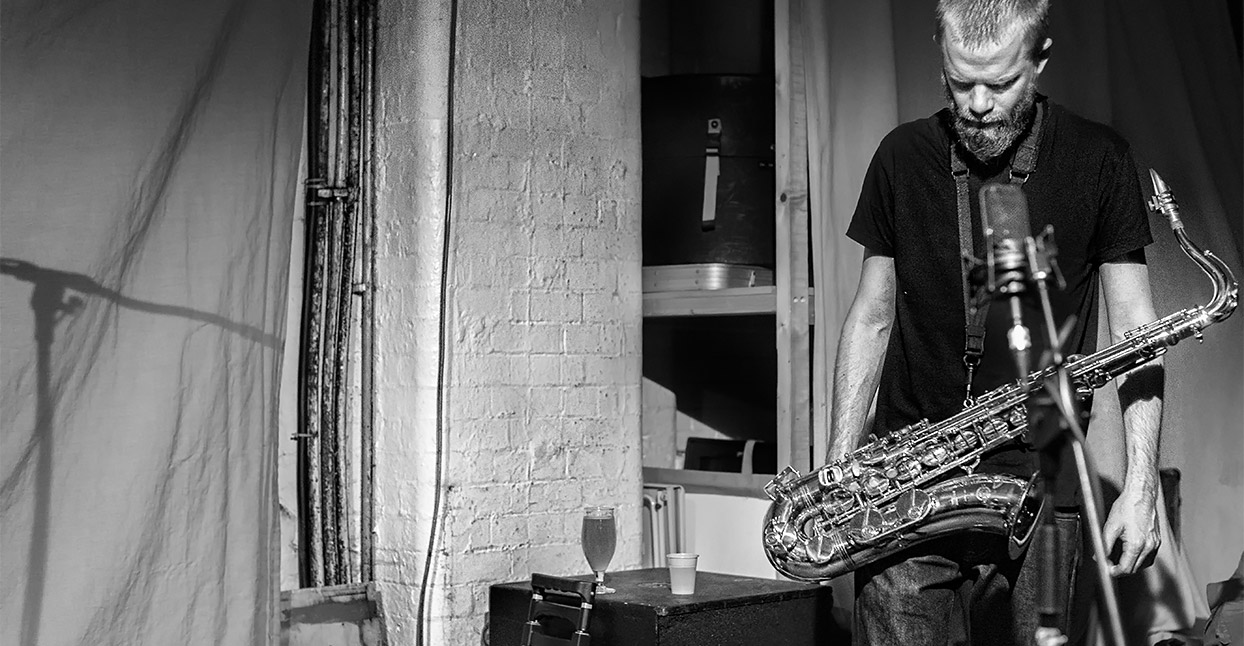 Three simple syllables that will strike fear into the heart of any self-respecting saxophonist: Kenny G. For many, the corkscrew-haired purveyor of sax-lead muzak represents the very apotheosis of the cheesy ends toward which the instrument can be put. From the obligatory reverb-soaked break on an 80s power ballad to the hackneyed excesses of jazz-funk, it’s certainly true that the unfairly-maligned instrument has been put to some rather questionable causes. But there is another, slightly less well-known history of the saxophone, one that runs from John Coltrane’s game-changing A Love Supreme, through the transcendental ragings of Pharoah Sanders and Albert Ayler, to the post-tonal textures of Peter Brötzmann and Evan Parker. As a voice of spiritual ecstasy or an instrument of sonic warfare, the saxophone is far from the window-dressing it figures as in pop music.

Yet with recent innovations likes the monolithic endtimes squall of Borbetomagus or the marathon breathing runs of Colin Stetson, it’s tempting to think that the potentialities of the saxophone are all but exhausted. This, however, is not the case, and while incremental pushes in new directions are constantly being made in the worlds of left-field jazz, free improv and noise, a few new outlier voices come to the fore. These artists—Colin Webster in the UK, Travis Laplante and Andrew Bernstein in the US—are united in their thoroughly physical approach to their innovations of saxophone-based music. In their own ways, they each push both themselves and their instruments to physical extremes in order to wrest strange and exhilarating tones from their chosen instrument. The ends toward which they push themselves, however, vary widely.

Colin Webster is currently laying waste to the UK avant scene with his explosive yet nuanced noise. Indeed, the glut of past and present projects he has been or is currently involved with is daunting both in its length and the sheer ferocity of its content. But whether in bands, combos or solo, his playing always has his core, raw qualities—abrasiveness, extremity, and oddness. Webster started playing sax at age 14—coincidentally, the same age that legendary free improv saxophonist Evan Parker picked up the instrument. But after fruitless collaborations with rock bands and electronic producers during college he finally found a furrow in the form of music’s more atonal end, one that’s led him to the extremes textures that the saxophone can offer, as he explains, “When I started to hear more free jazz, improvised music, and contemporary classical music, and learn about these other ways of making music, it opened another portal to new possibilities. It also made me realize there was a huge range of sounds on the saxophone that I hadn’t explored yet.”

Webster’s numerous collaborations illustrate this process of exploration in the making, whether it’s angular fire music in Kodian Trio, his combo with drummer Andrew Lisle and guitarist Dirk Serries, his noisy sides with avant turntablist Graham Dunning or his frequent moonlighting in the terrifying Dutch free jazz/grindcore unit Dead Neanderthals, who he first hooked up with when promoting shows for them in the UK.

Interestingly, Webster chooses to utilize the lower end of the saxophone family, coaxing harsh drones, animalistic squawks and abrasive stabs from his baritone and tenor saxes. But for Webster, it’s not an approach borne out of a macho attempt to out-do his partners in skronk (well, at least not entirely). For him, the motivation behind these sonic extremities is the sincere attempt to explore new territories of expression, as he attests, “I’m hoping to hear something new, something to be inspired by, something more extreme, something that sends you down a different path…” This, of course, necessitates a controlled and arduous approach to experimentation that belies the seeming abandon of the music itself: “It’s a combination of pushing yourself physically, building up strength, and using the right technique to get the sound you’re after. It’s very conscious, and takes a lot of control.”

More recently, Webster has taken up with the thuggish psych rock troupe Sex Swing. The sound of him blowing seven shades of skronk all over their recently-released debut album is a joy to hear, particularly on their bizarre take on the English folk ballad “The Murder of Maria Marten.” His fraternization with the rock crowd has also taken him up north, where he’s mined a rich vein of improvisational potential in the burgeoning Manchester scene – namely with Otto Willberg and Andrew Cheetham of explosive free rock troupe Desmadrados Soldados De Ventura. And as if that wasn’t enough, 2016 sees the five-year anniversary of his Raw Tonk label, via which he releases a whole swath of music on CD and cassette with the aforementioned collaborators and more.

Across the pond, other players are pushing the sax into interesting new spheres. Andrew Bernstein, for one, is re-examining the sax’s potential as a conduit for minimalism, as Terry Riley was wont to do back in the early 1970s. Bernstein’s saxophone minimalism, however is of an altogether deeper style than Riley’s. On the 2015 album Cult Appeal, for example, Bernstein uses circular breathing techniques and nuanced overblowing to create mellifluous streams of tones, sometimes worrying over one note for the entirety of a piece.

However, you’d be hard-pressed to find a saxophonist with such a profoundly serious approach to the saxophone as Travis Laplante, leader of the unclassifiable New York sax quartet Battle Trance. Laplante first began making waves with Little Women, an abrasive combo whose sound was not a million miles away from the noise Colin Webster continues to make with the Manchester improv set, but it’s arguably with Battle Trance that Laplante has made his most exhilarating and idiosyncratic statements. Their audacious name came to Laplante almost subconsciously. It was only later, when he researched the term, that he began to piece together how it related to what he wanted to achieve with the group: “It’s a state of being where you end up abandoning your own fear of death and sacrifice your own individual needs and survival mechanisms to a greater good. Traditionally it was sacrificing your life for your tribe, and that state after preparation ceremonies where you are ready to die for something greater than yourself.” Sacrificing individual identity for the good of the collective and subsuming the ego in communal ecstasy, then, is at the core of what Battle Trance do, turning the conventional function of the saxophone as a soloist’s instrument on its head. On this orthodox role of the sax, Laplante explains, “As a saxophonist I was trained early on to ‘find your own voice,’ to really develop your own sound and personality so that you’re instantly identifiable. And I understand the value of that very much. But with Battle Trance, the focus is about dissolving one’s own identity and surrendering personal artistic expression to a greater sound or the sound of the ensemble. A lot of times in in the group we actually don’t know which sound is coming from who at times, and that’s a big part of the ethics of Battle Trance.”

2014’s Palace of Wind sees the exposition of this ethos in full force. Taking cues from a number of idioms—minimalism, free jazz and modern classical composition mainly—yet conforming to none of them, it’s a breath-taking exercise in controlled intensity. Herculean passages of lengthy circular breathing, intense blasts of angular harmonies and plangent tonal progressions all amount to a sound that has a spiritual intensity rarely seen in modern composition.

As you’d imagine, this didn’t happen by accident. Battle Trance’s rehearsal sessions are notoriously rigorous; reportedly, at their first rehearsal, all the players focused on holding a single note for forty-five minutes. As with many of the saxophone’s modern innovators, this necessitates a focus and commitment to physicality, as Laplante concedes, “It does take a lot of training and physical endurance to be able to play a piece from start to finish. Often we’ll play a certain section hundreds of times just to go deeper into the nuance of certain multiphonics and exist within its sonic territory together for a long time.” What’s more, Battle Trance’s epic compositions are all notated; far from the excesses of pure free jazz, this music is made with a near-monastic level of practice.

Laplante is something of a spiritual guy, an orientation which places him firmly in the lineage of past saxophone masters like Sanders, Ayler, and of course Coltrane, of whom Laplante asserts, “I was tremendously affected by his music, but it was also about feeling the way he evolved and gave himself over to what he believed to be holy, and his searching for spiritual freedom. That’s been very inspiring to me–freeing myself from limitations I had created intellectually about what the saxophone can and cannot do.” So while it’s tempting to project quasi-mystical trappings on to exploratory musicians, one gets the feeling that Laplante is the real deal. A Qigong practitioner in his spare time, he approaches music with an uncommon sincerity: “I would say that music is 100% a spiritual practice for me. It doesn’t feel like it’s a separate practice from meditating, practicing Qigong, or even praying. Practicing the saxophone is just another part of trying to praise what I hold to be most holy; standing between heaven and earth and trying to really open myself up so love can come into the world.”

This spiritual intensity comes to full fruition on Battle Trance’s most recent effort, 2016’s epic Blade of Love. Ranging from deep drones to slippery modal progressions, from raging crescendos to stated moments of near-silence, it will leave you elated and exhausted in equal measure.

This deep emotional resonance no doubt comes from the album’s torturous compositional process, as Laplante explains, “When this music was coming in, I was feeling a lot of pain and grief and longing that I needed to go into for the sound to come through.” So, just as the Holy Trinity of Sanders, Ayler and Coltrane siphoned their spiritual passions through the saxophone, Battle Trance are pushing the instrument to lofty new heights of expression. In a time of detached irony and aesthetic dilettantism, this is the new sincerity we need.