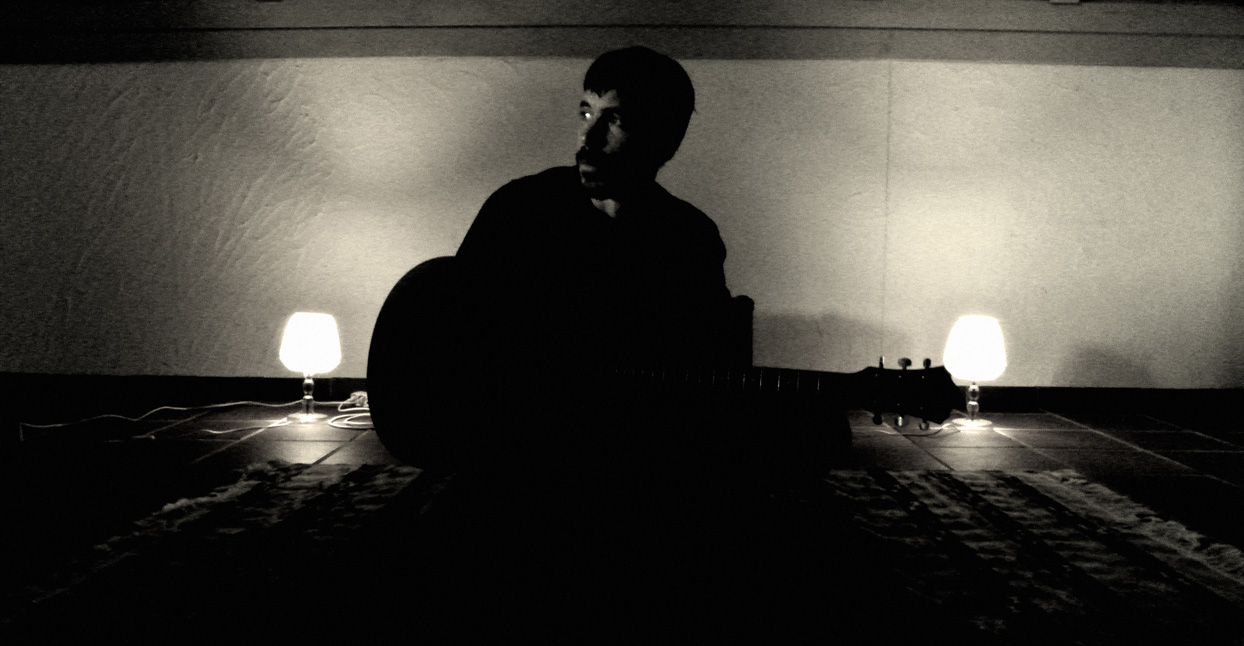 Ruven Nunez says he lives in a bowl; the Swiss guitarist interrupts a thought on a recent Skype call, lifting his computer over his right shoulder to show exactly what he means. Out a window, across the entire horizon, is a row of mountains in either direction. Nunez explains that it circumscribes all of Bad Ragaz, a town of less than 6,000 people set in the foothills of the eastern Swiss Alps that he’s lived in most of his life. It can feel isolating, he admits—but at least today, he feels safe here, comforted by the range that separates him and his family from the rest of the world.

When he was younger, Nunez felt the pull to live elsewhere. At 18, he moved to Shanghai, but he was quickly overwhelmed by the bustle of the city and the geographical flatness of the environment that surrounded him after a lifetime in the mountains. He moved back home after three months. Over the next half decade, he’d try stints in Japan, Korea, and Singapore—but the bowl always called him back. In his mid 20s, he moved back to Bad Ragaz for good, to settle down, lead a simple life, and to be near his mother, who’s lived with various forms of cancer for nearly 10 years and who he now lives with and cares for.

Around the same time that he moved back to Switzerland, he slowly dedicated himself to playing guitar, which he’d done off and on since since he was a teenager. He’d made attempts at playing with other people in bands throughout his travels, but back home he started recording alone. His first efforts were attempts at recreating the spaced-out guitar tape experiments that Brian Eno and Robert Fripp recorded in in the early ‘70s; nothing much came of them.

But then, he had an intense panic attack at a supermarket near his house, spinning him into an intense period of personal enlightenment. “It was a punch in my face, saying that there’s more to life than what I’d been doing so far,” he explains. “You can’t imagine how much more. After that I started recording again.”

His new efforts were more improvisational and idiosyncratic, loose pieces for acoustic or electric solo guitar that feel roughly hewn and home recorded. His first release during this period, 2013’s Evening Prayer, was initially intended as just a document of his practice. You can sort of tell; there are bum notes and fumbled phrasings, mistakes that Nunez says his friends called him out on when he first played the album for them. But he kept them in, believing there’s magic and honesty in these first-take recordings. It’s audible, even in the infancy of this stage of his playing—a possibility and optimism in the open spaces that this more formless music allows. It’s as if you can hear him coming to realizations about his playing—or even about the world—in real time.

In the four years since, he’s released half a dozen albums, about half of which he’s titled as a series, Devotional Guitar I-III. The rest have titles suggestive of religious or spiritual practice—his June release on tastemaking New Age label Sounds of the Dawn is called Altar of Sunlight, and his self-released July effort Guidance features a crucifix on the cover. He says he plays guitar like a “ritual”; he views his playing as a way of communing with some sort of transcendent state.

We caught up with Nunez about how his guitar playing is intertwined with his spiritual practice, and how those moments of personal crisis led him to mindfulness.

What does the idea of devotional music mean to you?

The term devotional music shouldn’t be restricted to religious bases. Any music that is really honest and pure is devotional. I’m sure you have this feeling when you listen to music and you get goosebumps. What is that? Devotional music is more than the sum of its parts. It’s not just sitting down to write a song, it’s tapping into something bigger.

I don’t think you can avoid that you’re going to be a spiritual person. Sometime sooner or later, we’re all going to be back to who we really are. For me it happened when I was 25, but some people start feeling it quickly before they die. I can’t even imagine how I was before that. How was I so blind to everything? This was parallel to the music.

What opened your eyes?

In 2012, I was moving to a new place, I was looking for a new job. You know the whole drill. I don’t need a lot. I have my five T-shirts and two pairs of shoes. But in Switzerland, it’s hard to live a simple life. Living here, just having an apartment is very expensive. It’s illegal to camp in the woods and everything. That became a pressure to me. One day I just snapped.

I remember the exact day it started. I went shopping, I wanted to get some noodles and tofu. I was in the store and I was standing there. I felt like I was going to collapse. Everything around me was fading into me. I looked at myself with those noodles and tofu in my hand and I had to go to the cashier. But I was completely paralyzed. I was standing there and I barely knew how to get coins out of my wallet. I was completely dislocated from everything. I somehow managed to pay. I lived 200 meters away from the store so I went home. I was sitting there and looking at my girlfriend and I told her ‘I’m not feeling so well.’ That was a huge fucking panic attack, and I’d never had one before. If you don’t know what it feels like, you can’t really talk about it. That was probably the most horrifying moment I had in my entire life.

From there on, it was a U-turn. I realized that there are more important things that I’ve been ignoring for my entire life. On one hand it was the most horrible experience I’ve ever had, but on the other maybe I wouldn’t be here if it wouldn’t be for that. After that I started recording again. 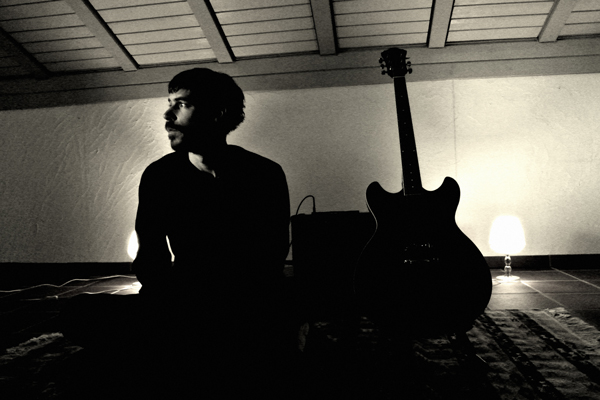 I love that you use the idea of devotion specifically—it’s something you do continually.

Meditation is not something you sit in a corner and practice for an hour. If you brew a cup of coffee, you should be completely there. Just sitting and being, that’s great, but most people reduce meditation and yoga to those physical practices. It’s not a part-time job. Just being is really hard. That should fill up your entire life, not just one hour a day in the morning or the evening.

Is that tied into the way you make music?

When I sit down and play guitar, it’s more of a ritual to me. It’s not something I do every day. It’s not a hobby. It’s something sacred to me. It’s an exchange of energy. I’m very grateful of this life and I feel like I want to send this gratitude out into the cosmos. But on the other side, there’s so much coming back to me while I’m playing. It kind of feels like communication. It’s all very natural to me and whatever comes and goes, is allowed to come and go. But it’s also some sort of discovery trip to me, which is rooted in my curiosity. Striking a chord is like planting a seed and watching it grow. You never know what’s coming out of it, how big it’s gonna be and what colours are going to see the light of day. So one aspect is the release and exchange of energy, and the other is curiosity, discovery.

Aside from making the music, what do you do for yourself spiritually to stay present?

What draws you specifically to Christian iconography in your album covers and song titles?

I’m drawn to any kind of sacred art, simply because it depicts devotion and curiosity. And just like myself, when playing the guitar, the artist of such a painting is trying to point towards some sort of holistic truth. So I don’t think there’s really that much of a difference between what I am doing and what the painter of devotional art does. We both are seeking for some sort of tangible truth. When I was half through recording The Holy Fountain, I was visiting an antique shop and came across a small, gold-framed print of a painting by Hermann von Kaulbach, titled Maiandacht—[which means] ‘May-devotion.’ When I saw that painting, I knew right away why the lady in the shop brought it to me.

It was an exact visual depiction of what I wanted the record to sound like, and it suited perfectly to what I had already recorded. So the painting itself was kind of a muse to me while recording the rest of the album, and it definitely helped shape the mood of it and strengthened what I originally wanted to do. I placed the picture right above the guitar amp while recording. The reason why that painting spoke to me right away was because I could identify with the lady in front of the altar, playing the instrument, filled with pure devotion, maybe even some despair. The artwork of the album Guidance is a painting by Caspar David Friedrich, titled Cross in the Mountains. I didn’t choose it because of the cross, but simply because of the light it shines out and the synchronicity it depicts. I find it a most wonderful painting, and also a beautiful example of devotional art.

Do you still struggle with the sorts of panic attacks you described to me? Or have they subsided as you’ve gone down this new path?

Once I realized where they came from and what their purpose was, I became very calm, and they subsided. I appreciated their presence, because I’ve learned a great deal about myself and it brought to me a whole new understanding of everything. I felt compassion towards myself, for the first time. It was like somebody punching me really hard and saying, ‘Wake up and live up to your potential. Stop destroying yourself!’  I went to see a doctor, and she told me to do some sports. I knew that I’m on my own with this. i knew it was something that I had to resolve within myself. There was no external help, and I had to deal with myself, all alone, for the very first time. That was quite scary. At first it felt like death, but after all, it was birth.