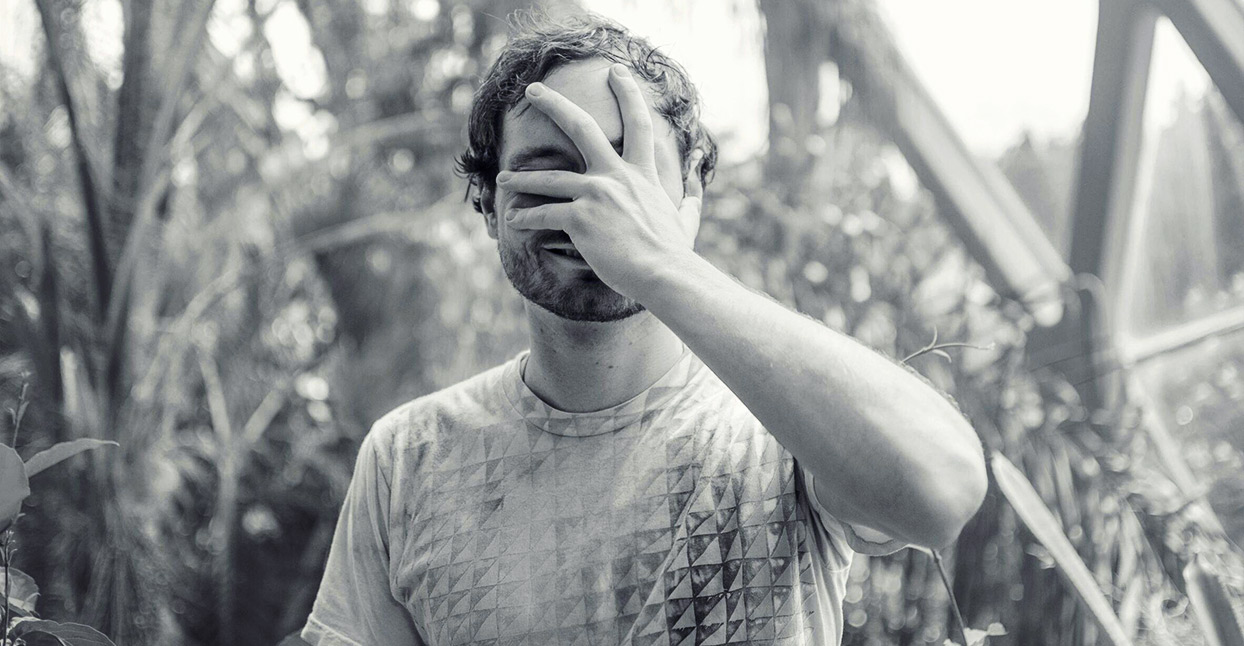 Producer John Hastings has always had a mind that was prone to wander. Before he moved to Denver and took the name Rumtum, the Ohio native used to sit in the back of his Algebra class, doodling in a notebook. He was sketching out a land he called Morá Tugá, a name seemingly cribbed from a Star Wars movie. “It was all about characters with space suits and all this gear,” Hastings recalls. “They would explore these new lands, take samples, find new things they could study, and figure out how to help themselves. There were also bad creatures.” As Rumtum became a bigger part of his creative life, Hastings forgot about Morá Tugá. But he never stopped creating worlds.

In 2012, the producer linked with fellow Ohio composer Ted Feighan, who records under the name Monster Rally. “Teddy and I grew up on the same lake,” Hastings says of his childhood friend. “My mom’s house and his mom’s house, the backyards of both of them drop off into the lake. We get along so well.” The pair’s shared escapist visions aligned on 2012’s Coasting—a globe-trotting collection of Middle Eastern dance and Caribbean calypso—and on MR&RT, which featured songs tinged with elements of psychedelic surf. By 2013, on Mystic Wonders, Hastings started drifting toward broader sounds. “The more I got into [my own music], it’s more weird, I’m more on a different front,” Hastings says. “All the camping and mountains around me are a huge influence.” Feighan eventually moved to L.A., and Hastings found his own identity in Denver, where he has opened for RJD2, Shigeto, and Thundercat on local dates. We spoke with Hastings about his new album, the loss that inspired it, and why he’ll never be entirely finished with Morá Tugá.

It’s my understanding that Morá Tugá is a world in a graphic novel you created as a young man.

I think I started the rough idea when I was 15 or 16 [years old]. I took it to college. The character drawings I came up with still carried through. My logo—the eyeball logo—is actually from a character I draw in the story. There’s a whole element of these creatures that are eyeball people. I feel like I’ve carried it with me a very long way without even knowing it.

The novel is about a group of alien people that have to go out and find resources to build everything they need to survive. It’s very musch based in Native American ideas. Being from Ohio, there’s a big Native American history there. It wasn’t an imaginary place for me, but more about the story I wanted to come up with.

To work on this record, did you feel like you had to get in touch with your adolescent mind?

I wanted to feel like I was 19 again. In those days, I used a delay pedal and a guitar to make music. The goal was to get back in the mode of never thinking about followers, or your social media, or what somebody is going to think is cool, or how hard this bass drum is going to sound live. The point was to make music that I wanted to put in my headphones and go for a walk.

So you were in it and not overthinking it?

There are plenty of things I don’t even know or think about until somebody asks me. The record is about escapism and going back to being excited and pure about things. I say ‘escapism,’ because I create worlds in order to get away. I’m doing it for myself, but also for my listeners to hopefully get something more. I really want to take people away and put them in a specific setting. It’s also why I make visual art. I want them to think about other shit that’s not paying their bills on time.

I was dabbling in a lot of stuff, but the particular moment when I started the record, and knew what I wanted to do was when I visited my grandfather in August 2014. He was sick. I also went through a phase where I quit music for awhile. I was in a relationship, and totally in love with this girl. I stopped playing music in order to spend more time with her. My grandfather passed, then my grandmother, and then I lost her. I had to do a lot of growing up. My grandfather passed in September 2015 and grandmother passed right after that, in March 2016. They were together 70-plus years. They knew each other since they were 17 and got married two years later. Once he was gone, she was done. She just wanted to go. I met Alexandra—the woman I’m with now—and I started picking up the second half [of the album] about a year after I started. I finished it in March of this year.

And the idea for this record came from finding your old drawings in your grandparents’ house?

There was a box full of some of my stuff, just drawings and papers. There were some remnants of the graphic novel; a lot of it had been thrown away. I was rewriting it when it turned into drawings or ideas. The record itself, especially the first half, I had a map in my head on which I started to plan where different things would take place. I started labeling songs after areas on the map.

This Morá Tugá world doesn’t seem to resemble the more exotic landscapes you once created with Monster Rally. What has changed in your approach?

My roommate works for WMD out of Denver. They make modular synthesizers. He started teaching me about synthesizers. A lot of what I did before was toying around until I found cool sounds and sampling ideas. But with his influence, I found out how to really make keyboards and modular synthesizers do what I wanted them to do. From the first song to the last song on Morá Tugá, you can hear the synths get tighter and tighter. The back side is way more expressive. I started getting more and more ‘out there’ with things I could do.

What is the world of Morá Tugá to you now?

A little bit more developed. I’ve got to get a few projects under my belt before I start working on a book.

The story never got finished, but a way of capping it off was to make the record conceptually tied to it. I still don’t feel like it’s really ever done. I think a lot of my artwork is still gonna plan the whole story. One day, I will want to write the graphic novel. For now, it’s done—until I’m at least in my late 30s or early 40s.

Oh, I think so. I was in indie bands playing guitar and singing, and didn’t even know how to use drum machines and samplers, let alone mix a full record. If I knew I’d turn into an electronic musician, I’d be shocked about that. I’d be blown away by how much Radiohead and electronic elements of other bands have influenced me. There’d be multiple movements that have happened in my life that I’d have never guessed, and would just freak me out.