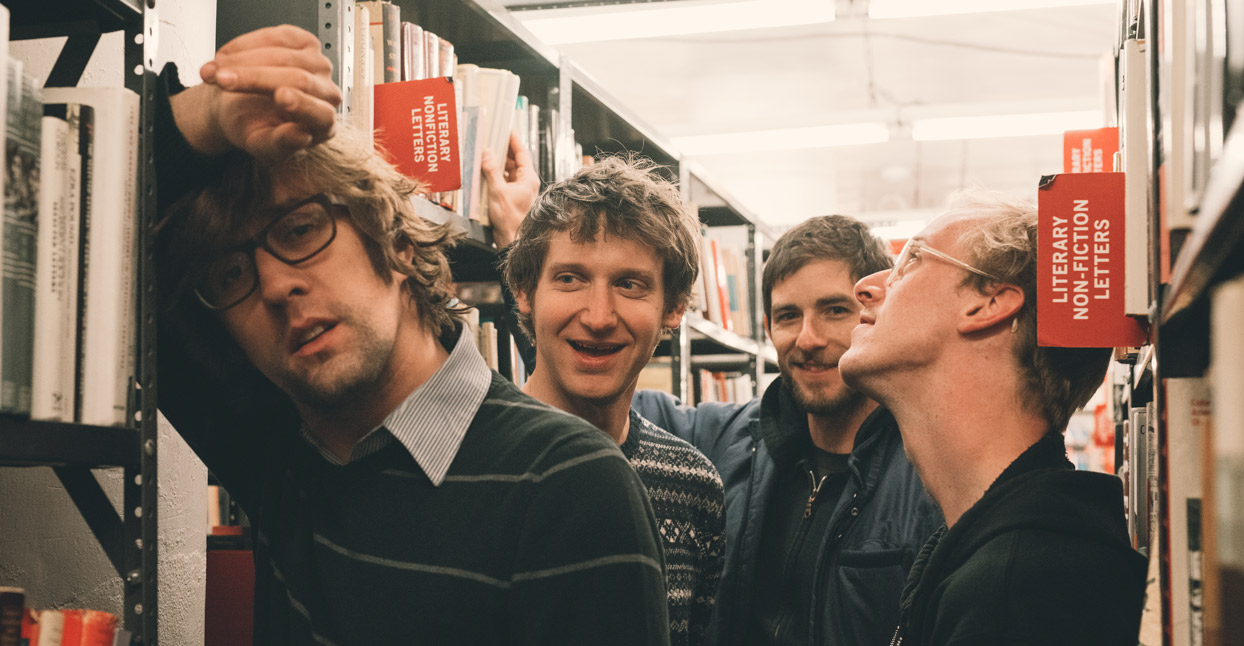 Jordan Hudkins, the frontman for West Virginia band Rozwell Kid, is sitting at a lengthy wooden table, flanked by bassist Devin Donnelly, drummer Sean Hallock, and guitarist Adam Meisterhans. He’s been busy putting up a series of gig advertisements on his Instagram page. All of them are obnoxiously-watermarked photos of different dogs wearing headphones and looking at laptops, with the show details pasted crudely on top. “Do you want to see the picture I made for tonight’s show?” he asks me at one point. “This dog is reading a newspaper article he is not happy about,” he reasons. “‘The tax on dog bones is going up.’” His bandmates chuckle uncontrollably.

Meisterhans turns to me with a grin: “Are you enjoying the peek behind the curtain?”

The band has reason to be giddy. Their sophomore full-length, Precious Art, on California label SideOneDummy has been a long-time coming, and it’s tied up in a bit of personal history for Hudkins. The first rock show he ever attended was Suicide Machines on the tour for their album A Match And Some Gasoline—which was also released by SideOneDummy. The circularity is fitting; Precious Art is a record on which Hudkins often revisits and recontextualizes his childhood.

Lyrically, Precious Art addresses adolescent anxiety, growing up, friendship, displacement, and heartbreak, but it’s littered with references to MadTV, futons, boogers, and Michael Keaton’s turn as Batman in the 1989 film. Hudkins writes in relatable specifics; he repurposes unremarkable objects or pop culture touchstones as vehicles for conveying grand human emotion. At first pass, the songs scan as humorous, and while that’s not entirely untrue, they also highlight the fact that humans are socialized to express serious matters in self-deprecating ways. When we hear these goofy references as genuine, sincere sentiments, we open ourselves to understanding different ways of getting at emotional truths. Is it just a cute photo of a dog, or is he mad about the impending bone tax?

After we finish our coffees, we head over to Everybody Hits, a Girard Avenue institution. Though it’s mostly occupied by batting cages, Everybody Hits also hosts shows. (Hallock, who lives close by, says that he played bass in a No Doubt cover band here.) The owner’s dog is sprawled on a picnic table in front of the cages, and Hudkins asks his bandmates which bat he should use. He runs his fingers over the helmets hanging on the fence, and takes pictures of the guys at bat. Revisiting one’s childhood, indeed.

Congratulations on Precious Art. How did that album title develop?

Jordan Hudkins: I’ve got a whole list of potential titles on my phone we were looking at, and a lot of them were really dumb. We were at some bar in Nashville where we were recording, and we were making some joke about someone saying, ‘Try a melody differently’ or ‘Do a solo differently.’ I can’t remember the entire context, but we were like, ‘Oh no, my art! My precious art!’ I put it on the list and it stuck out to me, and I just kept coming back to it. I thought it was the most interesting, because it could be taken a few different ways. It can be as dumb as you want it to be, and it can be as serious as you want it to be.

The closer, ‘Michael Keaton,’ is probably my favorite track on the record. It tells such a cool story about friendship and being a kid. It made me want to call my best friend and reconnect. I wanted to ask where that song came from.

Hudkins: Literally, it came from an idea I had for a screenplay or a movie. [All laugh]

Adam Meisterhans: Can we redact my scoff?

Hudkins: Is there any way you can make it even more obvious that I just said ‘screenplay’ in a coffee shop?

Meisterhans: In the second floor of a coffee shop!

Hudkins: I [had the idea for] a cool, Stand By Me-esque, coming-of-age movie about these three kids, probably pre-teens. It would be a period piece about these kids growing up in the late 1980s. They all come from different households, they’ve each got their own problems, but they bond over their love of nerd culture and superheroes and all the shit I was into as a kid. They see Batman and they love it, and they decide, ‘Let’s just leave. There’s nothing here for us. Let’s just hitchhike across the country to meet Michael Keaton, ‘cause that’ll solve all our problems.’ The original seed of the idea came from when I was a kid. I literally looked up Michael Keaton in my West Virginia county phone book, because I wanted to call him and say, ‘I really liked Batman.’ His number, of course wasn’t in there, and I couldn’t understand why. I was so upset. I realized I don’t know anything about writing movies, [but] I was like, ‘I do know how to write songs so maybe I can tell this story through a song,’ so that’s where it came from.

Meisterhans: ‘Maybe I’ll shrink down this hour and a half movie into a three and a half minute song.’

Hudkins: But I feel like with songs, it’s up to the listener. Allegorically speaking, it’s a song about friendship and hope.

‘Wendy’s Trash Can’ is a brilliant opener. It sounds a little disillusioned.

Hudkins: In a similar vein to the last track, you can kind of project whatever you really want onto it. It’s just about disillusionment and despair, trying to figure this shit out, and maybe not making the best decisions or the right decisions, but you made a decision and you’re doing it.

It seems like that’s a thread that runs through the record. On ‘Gameball’ you sing, ‘I’m just being myself out here, I don’t even know where to run.’ It seems like that confusion is a great way to understand growing up.

Recontextualizing those things seems like a really powerful way to tell those stories too.

Hallock: I was on those teams too, and I would always see that and be like, ‘This is special,’ at least in hindsight.

Meisterhans: That’s the thing that’s so funny about it. I played Little League, and there’s also people who take it to the nines, people whose parents are paying for lessons. People put this pressure on us that just doesn’t belong. My parents didn’t do that kind of stuff, but I was around kids whose dads were screaming at them. An eight-year-old should never be in that position. It’s interesting, because there are these literal things that it evokes and that it is about, but also there’s these general feelings and attitudes. I felt those same things in high school about different shit, or about working at a grocery store.

Hudkins: I get a lot of inspiration from memories from being a kid, and day-to-day stories from my childhood. But when I think about those stories that I’ve been inspired enough to write a song about, the basic emotion and idea behind it is always something I’m still dealing with. It’s not like I got over it. I’m like a 31-year-old kid now, and I have no idea what I’m doing.

Right. Those feeling and emotions and experiences first crop up when we’re kids so it’s interesting to look back at when they first occurred.

Hudkins: I think we’re all just trying to make sense of it by looking back at when it was  simpler…rather than all the things that come along with adulthood. We’re still trying to navigate the same emotions and same problems and hurdles.

‘Booger’ is such a universal experience—everyone gets boogers. But people still talk about it as if it’s weird.

Hudkins: It’s probably the most relatable thing I’ve ever written.

It’s a very earnest way of talking about heartbreak.

Hudkins: It was kind of like a challenge. I wanted it to be a relatable love song, but at the same time, the main character is a booger on a phone, something you don’t want to talk about. I thought that was an interesting juxtaposition. I wanted it to play sincerely. I think I told the guys that I wanted to write a song that made people go, ‘Am I OK with this? Does this bother me?’ Not trying to be confrontational, I just thought it was an interesting exercise.

It seems like you have a really cool way of communicating, and setting it to music seems like a cool juxtaposition.

Hudkins: I just always default back to the advice my mom gave me a long time ago, which is, ‘Write what you know.’ Someone on the Internet once told me my lyrics are esoteric. So I looked the word up first, and then I was like, ‘Oh, I guess they are.’ I don’t know.

Devin Donnelly: Doesn’t that mean pertaining to an isolated audience?

Meisterhans: It’s kind of like the opposite of Tom Petty. ‘I Won’t Back Down,’ there’s not a specific thing in that song. That could literally be about anything. So it’s relatable in that sense whereas these songs, the references are more specific, but the general feeling is relatable. It’s not casting as wide a net, but it gets the same feeling across.

Hudkins: You know that Blink-182 song ‘Josie’? You know that part where he’s like, ‘She brings me Mexican food from Sombrero’s’? I don’t know where Sombrero’s is, I’ve never been there, but I get the idea, and that sounds awesome. This is maybe a little off-topic but I’m really happy about it. I really like it when bands say other band members’ names in lyrics, and I got to do that on this record. I got to reference Devin, and I was so happy to do that.

How do you feel about your writing being pigeonholed as ‘esoteric’ or ‘niche’?

Hudkins: I know that what we write isn’t for everybody. I feel like when you’re a little more specific in your approach, the connection that you can make with people is maybe a little stronger, but at the cost of alienating some people. I don’t want to do that.

Hudkins: It all comes from a real place. Even if it’s from a narrator’s perspective, a lot of the details are authentic. I hope that that translates. Honestly, I feel like I’m wrapped up in my own little cocoon, and I’m just saying what I want to say and making what I want to hear. I’m playing it pretty close to home.