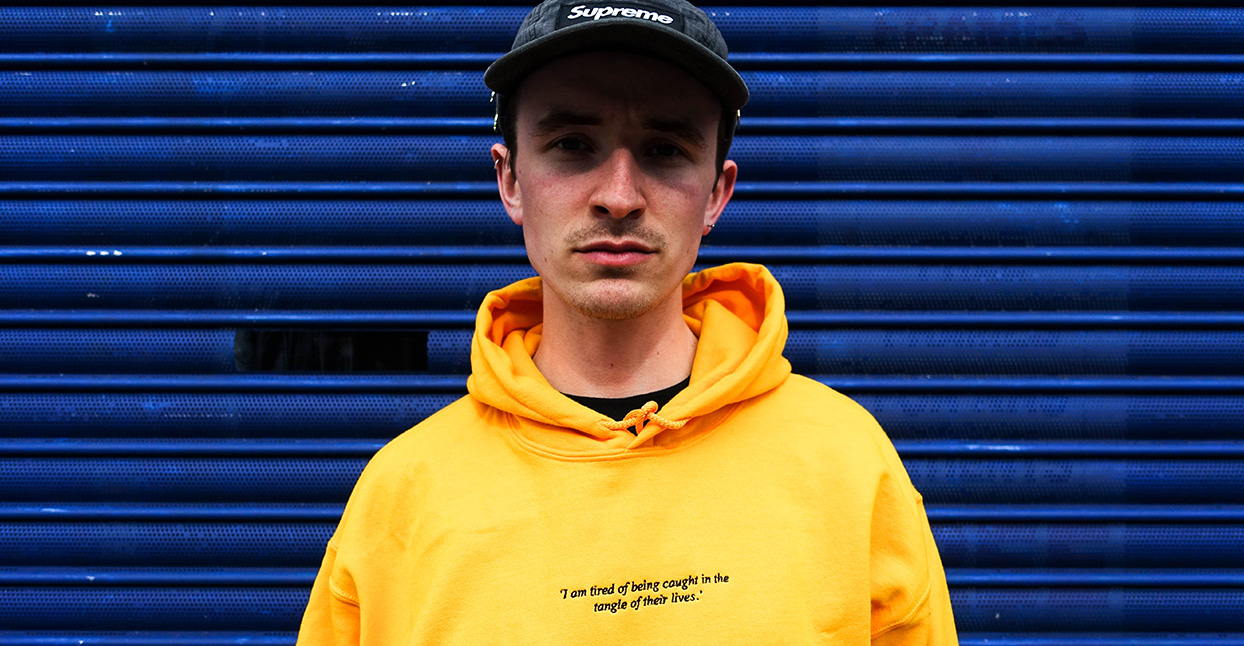 “I’ve got a weird amount of plants. I’ve got a lot of fish. I like to keep it quite Zen.”—

What’s in a name? If you’re a dance producer, as often as not the answer is “A pop-culture reference.” The polite young Londoner who calls himself Ross from Friends plucked his alias off a long list he’d made, and he admits he’s attempted to live up to the moniker: “I’ve been trying to keep up this persona of being goofy, and people have really reacted to that.” But the whimsy isn’t just a dead end—it’s a back door to music that’s both serious and playful. Ross from Friends’ tunes have a few layers of grub, but still stand out in a crowded field, and his hotly anticipated You Understand EP is bold and rich as well as understated—particularly the title track, a slow-builder that’s been getting online attention for a solid year. “As a musician, sometimes you want to be reclusive and undisturbed,” he admits—but as we discovered, Ross from Friends has a personal warmth that matches his music.

When did you start making music?

I’ve been making music for years—strange cut-up beats on GarageBand, and I was in a lot of bands: [one] called Broken Heads from when I was 15 to 17. I’ve had numerous monikers. My name’s Felix, and one of them I just referred to myself as Felix James, which is my first two names. When I first started producing, I was making this really gnarly dubstep sound, and I called myself Munching Beans. I hadn’t started just producing until 2012, when I launched the whole Ross from Friends thing.

Is this the first music you’ve made that feels like the result is what you set out to make?

Definitely. This is the kind of music I’ve wanted to make for a very long time, and feel comfortable making entirely. I feel like I’m really expressing myself, and really feel like I’m making something that’s original within the whole lo-fi subculture. When I first came across this kind of music, I thought I was alone. Soon after that, I discovered this entire community. It really did start online; there are a few meet-ups, a few events where you can bump into people, but I’m specifically talking about the Strictly Lo-Fi Facebook group. I didn’t really know about the scene, per se. I knew about a couple of tracks that I really liked. And I’d grown up listening to a lot of ‘80s electronic music that my dad would always play. That pushed me in the direction of making lo-fi music.

Do your friends give you a hard time for the moniker?

[laughs] Yeah. When I first started, a lot of people gave me so much stick: “What do you mean, ‘Ross from Friends’? That doesn’t even make any sense.” I actually get a few comments here and there on the videos: “What is this about? It’s weird.” It is kind of weird. In time I may change it, but for now I really like it.

What is your work area like? Is it cluttered or clean or what?

How do the fish react to your music?

[laughs] They like it. Whenever I peer over to them, they come swimming toward me when I play loud music.

Do you look for samples or do samples come to you?

I certainly look for samples. Before I even really start making music, I’ll sift through YouTube for hours, sometimes days, trying to build up a folder full of samples, of anything, really: a cappellas, or I’ll just dig through anyone’s channel looking for a snippet. That’s a huge part of the whole thing. If you’re trying to make music and you’re looking for samples on the go, you’re rushing the project a little bit.

Does the fact that it’s lo-fi mean you don’t have to worry so much about the quality?

Yeah. I’m quite lucky in that sense, I suppose. [laughs] The whole thing is rough-edged, so if the quality of the sample is really bad, it kind of adds something to it as well. You can hear it’s a really badly uploaded MP3, [so] it’s got some kind of story. It’s probably been ripped off of vinyl, then turned into an MP3, and then uploaded to YouTube, so it’s triple-compressed. And then I’ve ripped it.

Exactly. When you hear a really low-quality sample within a track, I think it gives it a little bit more character.

Do you keep careful track of where you find your source material?

Oh, no. [laughs] I probably should start doing that, I think.

Who do you first play a new track to? Besides the fish.

[laughs] Well, other than the fish, it would be probably my girlfriend. She’s really into music as well. She tells me what’s good and what’s bad about it. That kind of validation from someone close to me means everything. I like to make my friends feel good from the music I make, basically.

How do you know the Lobster Theremin guys?

I’d known about Lobster Theremin for a little while. I noticed someone had [re-]posted one of my songs, and I saw that the head of Lobster Theremin, Jimmy Asquith, had liked it. So I decided to email Lobster Theremin. I’d actually gotten a lot of interest from labels, but Lobster Theremin was the only one that I’d emailed. Jimmy came back to me personally: “I’ve been meaning to actually email you—we’d love to do something.” There were a number of days after that of me dancing around my room, just in shock that I was going to be doing something with one of my absolute favorite record labels.

Tell me about making “(Talk to Me) You Understand.”

I decided to write a song that I really love and focus on every little aspect of it, just to make it sound as good as I could possibly do. Pretty much all I did for six months was make that one song. It was a really fun process. Loads of things had changed in my life then, so it was a really emotive song for me as well—which making music never really had been before. There was quite a lot of emotion genuinely put into that song. The [You Understand EP’s] other two tracks as well—they’re both quite sample-heavy, and they maintain a standard structure throughout. Compared to “(Talk to Me) You Understand,” those two really didn’t take that long, about a week each.

Which club, if any, do you ideally hear your music being played?

It’s often tough to make lo-fi dance music sound good in a club. Someone played [my music] in a nightclub and it actually sounded OK. But the dream is to have it all played at Corsica Studios in London. That’s the big club that supports this wave of lo-fi dance music—like Find Me in the Dark, which is Jimmy from Lobster Theremin’s club night. Corsica Studios is a great venue; it’s got an excellent sound system now. There’s excellent night that have always been put on there, so to hear my music being supported by that crew is brilliant.