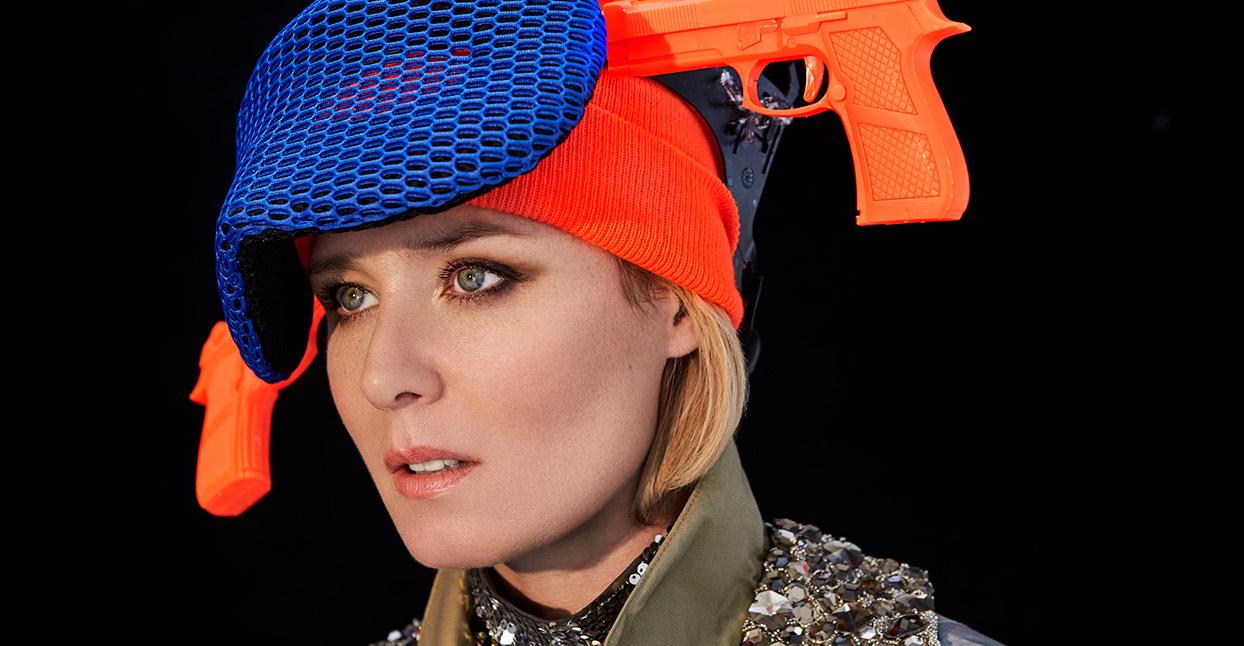 Obviously I’m leaving a mark, and I’ve made a mark. If you talk about being good to the world, it hasn’t been a bad one. I’m not leaving rubbish behind, garbage behind.

Before Róisín Murphy’s Mercury Prize-nominated Hairless Toys was released in 2015, it had been eight years since her last record. While many musicians would make much of the hiatus or cite an enduring creative block, Murphy has matter-of-factly said that the right record just didn’t come calling. But when she teamed up again with longtime collaborator Eddie Stevens and went into the studio to record again, the songs for Hairless Toys flowed as if there’d never been a dry spell. (She had previously primed the pump with her Italian language EP, Mi Senti.)

Whether in her previous band Moloko, on her own, or collaborating with other musicians, Murphy has not shied away from the challenge of making intellectually complex pop music. She combines electronic and live instrumentation in surprising layers beneath her Irish contralto. Those qualities are some of the reasons Hairless Toys was such a winning album. And now Murphy has released another album of songs from the Hairless Toys sessions. While the new album, Take Her Up to Monto, out July 8, may share an origin story with its predecessor, Murphy easily articulates differences between the two. She calls her new album more “pointy” and “extreme,” saying it’s the irreverent sibling to the previous album’s quiet child.

You said during your hiatus from music the right album didn’t come calling to you. Did you make any attempts to make albums that didn’t work out during that time or did you just not make music?

No, I didn’t ever really sit down and make the time to make an album during that time. The first big thing I made was the Mi Senti project, which was this Italian EP. That was the first sizable thing I made after the Overpowered album. I did wonder if a song like “Stimulation” and “Jealousy,” which were both through the same producer—those were sort of one-off releases I did—I was sort of wondering if they would turn into an album at some point, but they haven’t yet.

How do you consider Take Her Up to Monto different than Hairless Toys? I know they were recorded at the same time.

They’re such hard ones to describe anyway that to describe the differences is even more hard. Both very unusual records, I suppose, because the biggest decision that I make, really, is who I collaborate with and then it’s about going with that decision. That’s the ultimate to what I do, musically. Working with Eddie Stevens is like two performers working on one record. It’s very visual in a sense. I think this one is a bit more pointy; it’s a bit more extreme in places. If it’s two children, Hairless Toys would be the more quiet child, I think, and more surreptitious. Take Her Up to Monto, she’s more irreverent and extreme and complex, as a personality. They’re siblings, you know. Really like brother and sister.

I was really struck by the lyrics to “Thoughts Wasted” and the story you’re telling and how vivid and imagistic it is. Where do those lyrics come from or what do they mean to you?

“Thoughts Wasted” is a few songs in one song, so I have to be specific to different areas of the song. There’s a poem, like a spoken-word part towards the end. Is that the part you’re talking about?

I meant a lot of the way you speak things, and you have dragons and really fantastic, specific imagery, and then you talk about religion. It becomes its own short story.

The main part of the song is a straight-up relationship thing. There’s a lot of relationship stuff in a slightly more grown up way than I used to do. It’s more like not really knowing what’s right and wrong, which is of course so hot right now, as they say in America. You know, like characters we see them doing wrong. but we are fascinated by them, or we are searching for the meaning of that in ourselves. There’s loads of that, particularly in that song. Not knowing the difference between right and wrong.

Between your last two albums, Take Her Up to Monto and Hairless Toys, what are you the most proud of?

I’m just proud to still be doing stuff. I really am. I’m proud that I was able to come back and I had an audience there that hadn’t forgotten me, and that I’m still able to do—well, I’ve done whatever I want. There’s been no compromise. I’ve done OK on that score, considering that. I’m proud that if I died tomorrow, my kids would be able to have these songs. These many many many many songs that I’ve written are theirs. I’m proud of the songs, that they weren’t compromised. They won’t have to say, ‘Oh my mum was a right ol’ sellout. Or we have to look after the copyright of all this shite.’ It’s pretty good, most of it. That’s a nice thing to be proud of. I’m not leaving aesthetic waste, plastic. Obviously I’m leaving a mark, and I’ve made a mark. If you talk about being good to the world, it hasn’t been a bad one. I’m not leaving rubbish behind, garbage behind.

You touched a little bit about what your collaboration with Eddie Stevens is like, but I wanted to hear more about what makes you two work so well together.

Well, he’s got all these records. He’s a very capable producer, but essentially different to any other producer I’ve worked with because he’s such a performer. He’s also one of the very best performers. There’s this element in the music that is very descriptive and very intense and very visual, so both records are like that. And then why do we get on? It’s mostly to do with sense of humor, because we’ve got a filthy, dirty sense of humor, both of us. That’s a great outlet for us. When we’re under pressure, we get more filthy and dirty. That’s how it works.

What made you want to start directing your own videos?

I’ve always been interested in the music videos. I’ve always put my hand in, and been very involved in the videos, the making of them. When I started to look around at the beginning of Hairless Toys, I didn’t have a large budget to pay people. The directors didn’t change that experience, the ones that worked with us, coming up for the job. It was a bit of a necessity, I had to do it. There was always this burning ambition, I think. I lived with a director, one of my best friends Dawn Shadforth, for years in Sheffield and watched her become a director. My other best friend is Elaine Constantine, who directed Northern Soul, that came out last year. She’s a fashion photographer, and she’s turned to film directing. I’ve watched at the sidelines as people have done it and been very envious, so I just took my chance while I could.

Is there anything special you do to get in the mood to make music and get in the studio or does it just happen?

Yes, it does just happen. The first thing you do is you just go and do it, which is necessary and important. If you don’t go into the studio to do it, you definitely won’t do it. Rule No. 1, I just go to the studio and I have lots and lots—sometimes I go I don’t have anything with me, but sometimes I go and I have lots of journals with me. I keep journals, I keep scrapbooks with things cut out of magazine and newspapers. I bring them with me and I use them as prompts. It’s not that I create there; I just have them there to help me make them up on the spot, if you know what I mean. I might be flicking through and see a word like ‘exploitation’ and it would make me write a whole song about exploitation. I do whatever it takes. I’ve seen a film the night before and I want to write the story of the film or I’ve had a dream or I feel something or I don’t feel something. I’ll use any message. The more messages the better, I suppose.