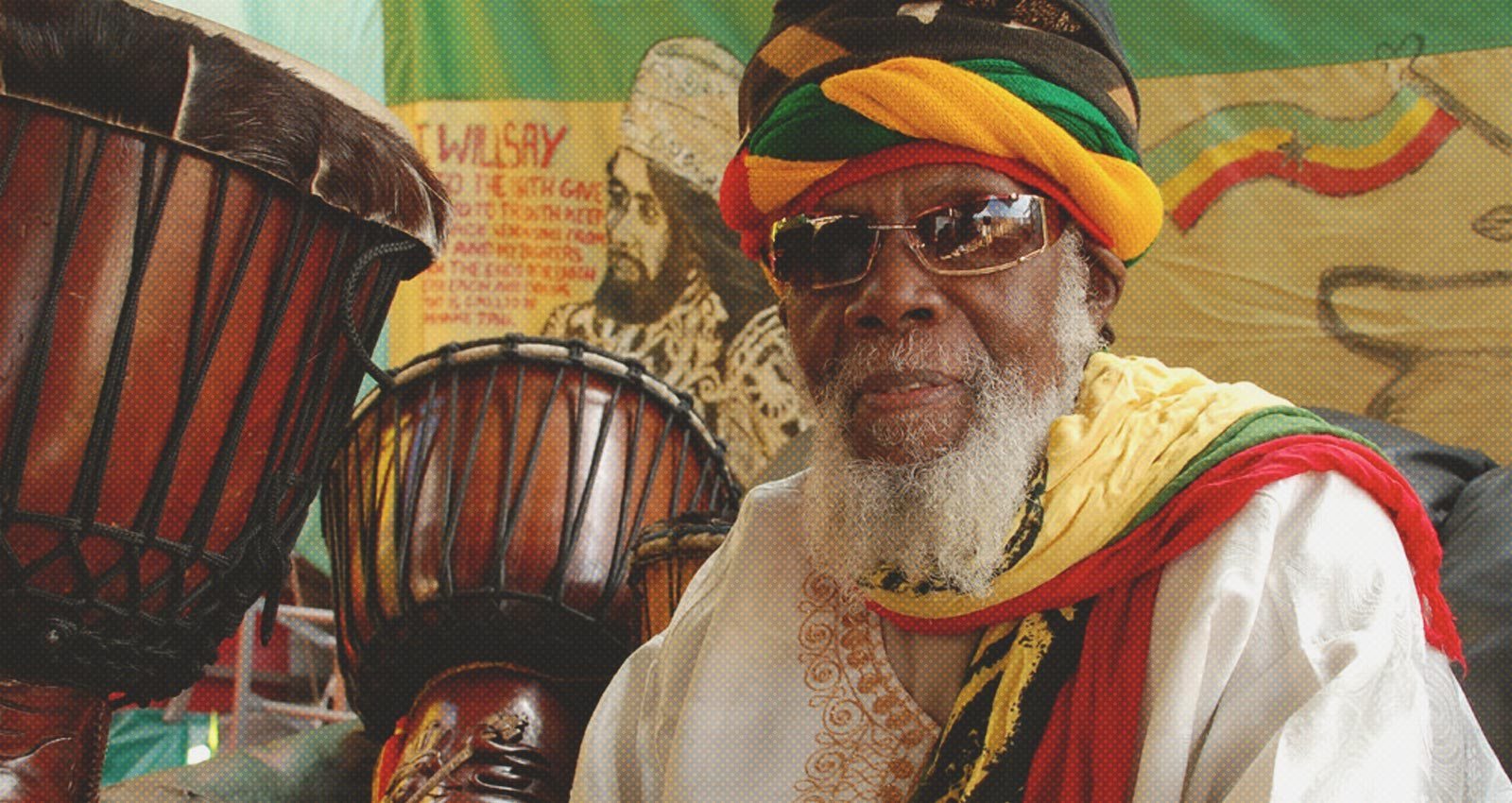 Ras Michael listens carefully and quietly in the passenger seat of my car as “Toast,” by popular Jamaican artist Koffee, plays through the speakers. He wants to hear how far reggae’s come since he was churning out Nyabinghi records in the ‘70s.

His head is wrapped in a white scarf with red, gold, and green trim, his neck blanketed by a cloudy beard dreaded down to his stomach. He has the steady disposition of a man spiritually elevated above the hubbub of L.A. traffic. Michael was the first member of the Rastafarian movement to host a radio program in Jamaica. He’d become a soldier of Jah, translating his teachings through Nyabinghi, a sacred Rastafarian drumming tradition. When Jamaicans united across political lines at the historically monumental One Love Peace Concert in 1978, it was Ras Michael and The Sons of Negus—a rotating cast of island all-stars including Peter Tosh, Robbie Shakespeare, and Earl “Chinna” Smith—who performed the Ethiopian national anthem.

Something about the 20-year-old Koffee’s sound resonates with the 77-year old Ras Michael. When the third chorus comes in he lets out a giggle and a review: “Me love the beat, man, and how she come out about the blessings.”

Michael’s latest release, Live By The Spirit, dropped the same week Koffee became the youngest artist—and first woman—to win the Grammy for reggae album of the year. Michael’s slowly churning, churchical Nyabinghi might sound far from Koffee’s bouncy, contemporary hip-hop-influenced take, but Live by the Spirit presents an opportunity to explore how even as Jamaican music evolves, Nyabinghi remains its deepest root.

Nyabinghi drumming is an extension of the Nyabinghi order, the oldest spiritual mansion of Rastafarianism linking the religion to its African heritage. The term traces back to the Ugandan Queen Nyabinghi, who inspired an East African anti-colonial movement in the 18th and 19th centuries; Rastafarians interpreted the movement as death to the oppressive nature in man. They manifested the Nyabinghi spirit through ritualized gatherings called Groundations, where drumming, chanting, and dancing were connective pathways from the self to Africa and the divine.

“The drums themselves spoke. The middle pitched funde drum gives you the one-two sound. Rastafari interprets that as the heart telling us to do good.”

“The drums themselves spoke,” says Rastafarian historian Ras Wayne Rose. “The middle pitched funde drum gives you the one-two sound. Rastafari interprets that as the heart telling us to do good.” The message reverberates through a thundering wood barrel bass drum pounding on the one and the three. Players improvise patterns on the smallest and highest pitched drum, called the Repeater or the Akete, to add the spice of the human spirit.

Nyabinghi rhythms rolled down from the hills and into the psyches of Trench Town youth. “It was a mystic thing. You’d be miles away and you’d hear the Nyabinghi drums echoing through the air,” says Santa Davis, former drummer for Peter Tosh, who adds Nyabinghi percussion to Live By The Spirit. “People would be drumming from the morning until the next day.”

Davis is a bit younger than Ras Michael, but the two came of age together in Kingston alongside legends like Bob Marley, Bunny Wailer and Joe Higgs. Song entered their lives through church but they forged their own musical personalities by absorbing the energy of Rastafarianism, Nyabinghi, and their neighborhood. No one had music tutors or professional instruments, the streets were both the resource and the teacher.

“Jamaica is a university of knowledge, especially the ghetto, so growing up there was my school,” says Ras Michael. “Our whole being was inside that music, we were the drum,” adds Davis.

Ras Michael gravitated to the drums to tell stories. He made his first out of peanut boxes and tin cans, before his elders passed down an indigenous design involving cottonwood tree barrels and goatskins. Nyabinghi became an obsession for him. It elevated his spirit and placed him amongst the best drummers in Jamaica at Groundations around town.

Michael recalls biking up and down from the flats to Count Ossie’s Rasta camp in Wareika Hill to exchange ideas. Ossie became the first Jamaican to put Nyabinghi on wax with “Oh Carolina,” the 1958 track by The Folkes Brothers. By fusing Nyabinghi with jazz and blues, the single laid the foundation for what would become the island’s signature sound.

Ras Michael and Count Ossie’s names are often lumped together as the pioneers of reggae, but Michael speaks with conviction about how he expanded Ossie’s work.

“Reggae isn’t reggae until Nyabinghi is played with it,” he says. “Ras Michael reinvent the roots! I was the first brother who incorporated the Nyabinghi drum with the trap drums, that’s the one drop when Bob say ‘Listen to the one drop!’”

While Ossie was the first to record Nyabinghi, it was Ras Michael and The Sons of Negus who pushed the style further towards reggae by bringing Nyabinghi to the drum kit and adding electronic instrumentation around it. Michael moved from the strictly devotional to the outwardly experimental with albums like 1975’s Rastafari, and Promised Land Sounds, recorded in a Santa Cruz Rasta church in 1980. Writer Roger Steffens, known for his voluminous reggae archives and for his oral history of Bob Marley, says the group is “state of the art electronica Nyabinghi music. The Grateful Dead meets Nyabinghi.”

As his musical approaches evolved, Michael retained the spiritual and political sustenance of the Groundations. He attacked colonialism with tracks like the single “Run Aggressor Run” and beseeched children not to cry, for God will wipe their tears on “None a Jah Jah Children No Cry,” from Rastafari.

Michael brought the Nyabinghi tradition with him when he moved to L.A. in the ‘80s. He formed drum cores on the Venice boardwalk and recorded albums in beach bungalows. Later he relocated to Inglewood where he still has regular Nyabinghi sessions at his home. When we pick up Ethiopian food on Fairfax, his photo is hanging above the register next to the Emperor Haile Selassie.

Michael returned to Venice to record Live By The Spirit at Hen House Studios. Lyrically, he again blends biblical hymns with uplifting teachings from Jamaican philosophy. He urges universal oneness on “Be As One,” recites the story of “Nicodemus” from John 3:1, and revives Rastafari classics like “By The Rivers of Babylon” and “Press Along Saints.” Santa Davis says the intention was to return to the roots by “keeping things organic, but with some spice to it.” That meant honoring Nyabinghi’s disregard for song length, with no MIDI, samples, or electronics, and a whole lot of guitar, sax, flute. And, of course, those powerful Ras Michael vocals, supported by chanting background singers.

“We made this album because we want the people to think and listen,” Ras Michael says. “World in a lot of turmoil, turmoil of ignorance, leaders against leaders, mothers against daughters, sons against daughters. Killing and all them things, that is not what the world should be about. If you come with a good message, people love music, people start to think.”

Live By The Spirit revitalizes a Nyabinghi pulse that remains a subliminal influence on Jamaica’s contemporary sound. “It [Nyabinghi] is still present, it’s almost a part of our indigenous sonic retention,” says Jason Panton, co-founder of the Sound System roots reggae event series Dubwise. “The standard one drop isn’t capturing ears anymore,” he says over the phone from Kingston. “But most reggae rhythms start with the [same] one-two as the Nyabinghi. It’s the foundation of the house, but if you live on the third floor, you might not think too much about the foundation.”

Panton explains how Nyabinghi’s place in Jamaica’s music culture reflects that of Rastafarianism on the island, and how women artists like Koffee are modernizing reggae through a reform adoption of the roots doctrine. “They have an understanding of the precept of Rasta and they apply it in their own Rasta way of life. They don’t want restrictions and labels. So long as they’re not hating and they’re living in gratitude, that’s enough for them.”

Rising artist Naomi Cowan’s nickname was “Nyabinghi” growing up, and she sampled “None a Jah Jah Children No Cry” on her first mixtape. She says her generation draws on past traditions like Nyabinghi to channel their own spirit. “I’m really happy with what’s happening in reggae and dancehall,” she says. “There’s this presence of female artists making sounds with their own message by looking at the past, being inspired by those who came before.”

The roots spread through the diaspora, too. U.K. drummer Moses Boyd comes from Jamaican ancestry and his latest album Dark Matter was inspired by Nyabinghi’s invisible cultural, spiritual fabric. “I found it fascinating that I can tell we all come from the same thing when I listen to Nyabinghi,” Boyd said. “Everything has that heartbeat, that pulse, it was still strangely there all along, I just didn’t necessarily recognize it until recently.”

No matter how far we build up from the original Nyabinghi foundation, Ras Michael remains confident in its immortality. “Nyabinghi is the in thing, Nyabinghi will always be in,” he says. “The heartbeat of togetherness and praises to God stand forever.”

We crawl along L.A.’s perenially jammed 110 freeway in silence until Michael’s phone rings. “Yes!,” he answers. “Hear the voice of the binghi man say!”

The one-two da doom of a bass drum crackles through the speaker. “Yes Mon, you hear the binghi?,” cries a voice from the other end. It’s Santa Davis calling from a Groundation in Kingston. We’re so far away, but the thundering pounding catches Michael immediately. The car shakes from his stomping foot. “Yes! Zion Lion! Binghi roll! Me love that!”