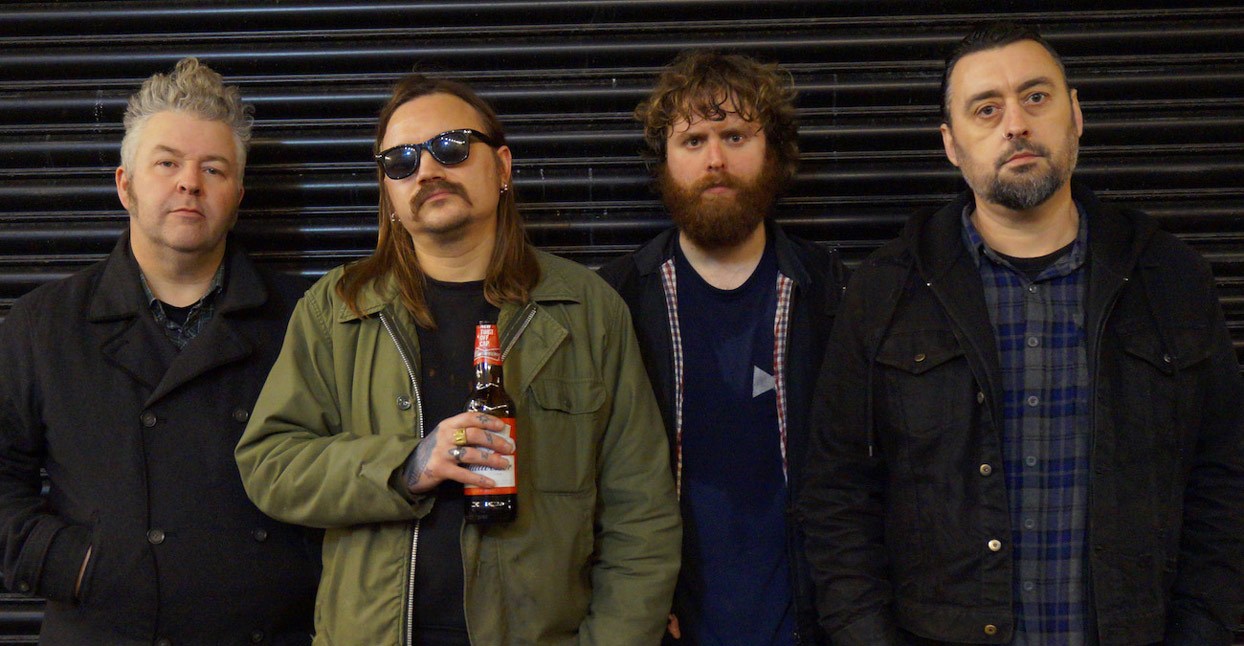 Nic Bullen was still a teenager when he left Napalm Death, the pioneering grindcore outfit he’d founded in his youth. Bullen’s musical output has long transgressed the short blasts of ultra-fast metal which was, and still is, what Napalm Death specialize in. In the early ‘90s, he co-founded the industrial proto-dubstep act Scorn and his more recent solo work has spanned avant-garde electronics and sound installations. In yet another sonic shift, Bullen’s latest band, Rainbow Grave trade in slow and sludgy noise punk inspired by cult acts like Drunks With Guns.

Despite the stylistic progressions, Bullen’s general outlook remains largely unchanged since those early days in Napalm Death when he would growl lyrics about spending a life in chains while crawling slowly towards the grave. Bullen is now in his 50s. “Life means nothing but pain and death. I don’t feel any different,” he says. He’s laughing, but it’s hard to tell if he’s joking.

Sung through a range of effects to enhance the sense of alienation, Rainbow Grave’s lyrics are defined by this bleak philosophy. On the track “Year Zero” from his debut album No You, Bullen instructs us to “Think of your childhood dreams / They come to nothing.” On “Dead End,” he concludes, “It’s not much of a life.” And on the LP’s opener “Ten Million Tons Of Shit,” Bullen sneers, “I hate your car / I hate your shoes / I hate your pets / I hate your face…”

“‘Ten Million Tons Of Shit’ is not about anybody in particular,” explains Bullen. “I was trying to distill an essence of negativity. It’s inchoate, rather than directed.” That may be so, but the track’s sentiment has been targeted towards entire audiences when Bullen has introduced it with the words “This song is about how I feel about you.” It’s not the most obvious way to win over a crowd.

“It just sets a tone for the evening, doesn’t it?” quips Bullen. “Whilst there may be some humor in it, I wouldn’t want to diminish the depth of feeling about those lyrics. If I think of the lyrics I wrote for what became Scum for Napalm Death, they express a certain viewpoint towards the world.”

The fact that Rainbow Grave’s music wallows in misery comes as no surprise; its members have a history of exploring darkness in their music. In addition to Bullen, the band’s lineup includes guitarist John Pickering (Doom, Police Bastard, Sore Throat, etc.), bassist Nathan Warner (Bee Stung Lips), and drummer James Commander. Together, the quartet create a sludge-punk racket, cut with bad-trip psychedelia and hints of abstract jazz. Take Swans’ early material, filter it through the acid-frazzled psyches of Destruction Unit, add existential misery, and you’ve got the formula.

The band’s music is built around improvisation, which is extensively discussed and conceptualized by the members. “We often look at a piece of music and add a lot to it until we get frustrated,” Bullen explains. “Then we start to subtract. It’s only really when we hit the bottom of that subtraction process that the pieces work.” The group’s sound hinges on thick layers of effects and bloody-minded riff repetitions. When choruses appear, they are almost primitively blunt—usually just one word or misanthropic phrase shouted over and over. Take “Suicide Pyramid,” for example: “Die! Die! Die!…”

“The intention was to play music that was shorn of all the things that usually make music sound popular and appealing, and to channel a certain tone of negativity that was present in early punk,” says Bullen.

In perhaps another bit of dark humor, the bio for Rainbow Grave on their Facebook profile promises “Disappointment guaranteed,” and quotes a live review accusing the band of being “either a totally miscalculated disaster or a massive piss-take.” So which is it? “I would say it was a calculated disaster,” concludes Bullen. “Through all the music I’ve made, I’ve never intended it to court popularity or success. I’m only interested in what it’s doing in itself. Since I started making fanzines when I was a pre-teenager, I’ve never cared [about criticism]. It doesn’t have any effect on me, because you can’t manage or direct other people’s perception of anything. So I think it’s a shame for them if they don’t like it. Because they’ll have to put up with it until it stops.”