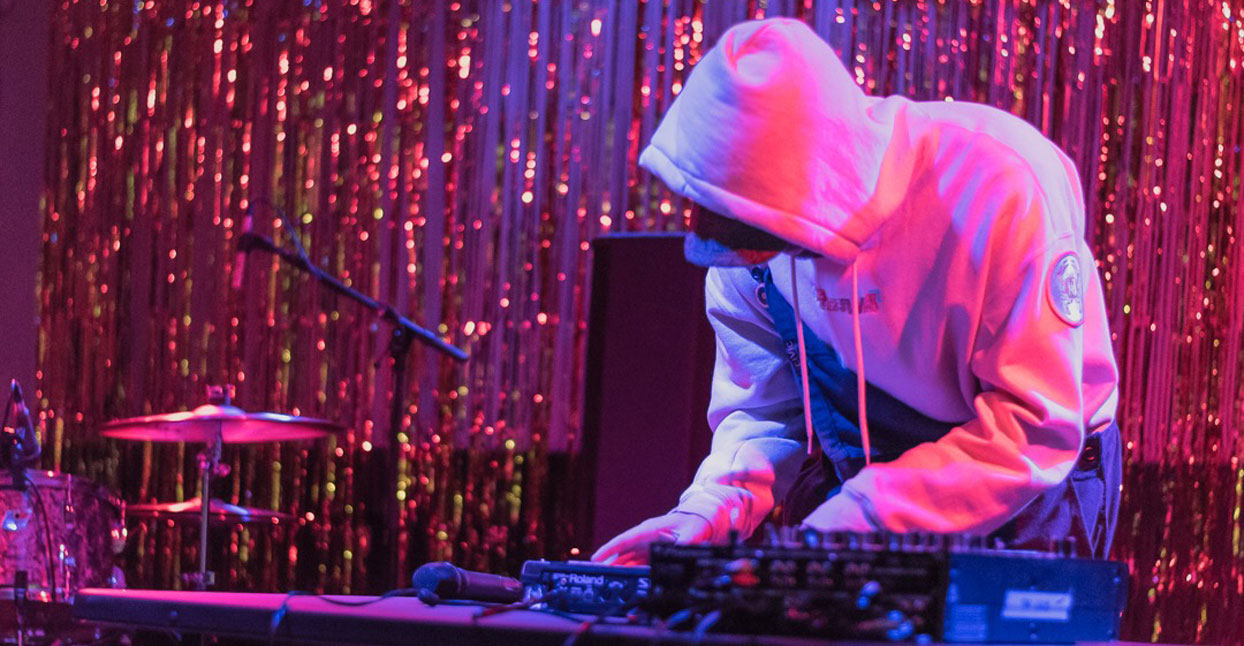 Photo by RJ Would

“A lot of my beats are dark,” explains Jacob Gilman, the Boston producer better known as Rah Zen. “I’m big on textures and taking percussion and making new instruments out of samples so that the sounds are unfamiliar, or sound like they’re from another creature.”

Gilman recently released his stunning sophomore album, Upon the Apex, an intense and often eerie album that’s rooted in hip-hop, and features brilliantly layered textural sounds and thumping, resonant low-end. Some beats sound like they have alien insects crawling through them (“Ritual”); others rhythmically manipulate vocal samples, giving them an almost mantric quality (“Amen Rah”). At times, Gilman’s beats could be the score of a Sergio Leone reimagining of Ghost Dog (“Snake Charmer”).

Upon the Apex was released by the L.A. label Dome of Doom, whose artists and founder have strong ties to the now-defunct Low End Theory (LET), a weekly hip-hop night that was held at a local L.A. club. The night was a source of inspiration to Gilman. LET was the hub of the Los Angeles beat scene—a sacred meeting ground and informal academy for artists like Flying Lotus and Nosaj Thing, who were architects of the forward-thinking hybrids of hip-hop, drum & bass, jazz, and more that defined scene’s sound. The weekly was also a beacon for beat music producers outside of L.A. With the right venue and the support of like-minded artists and listeners in their community, LET inspired producers to create a beat scene in the cities where they lived.

“I feel like I grew up on LET, even without being there,” says Gilman. “We were following it on the Internet, getting the records [from labels like Brainfeeder] whenever they came out.”

In addition to recording and working full-time as the event coordinator for ZUMIX—a non-profit that offers free music and creative technology programs to underserved Boston youth—Gilman’s become a central figure in Boston’s emerging beat scene. Nightworks, the bi-monthly beat night he founded last year, is the scene’s unofficial home. “I created Nightworks because there wasn’t a show like LET that I could go to,” he says.

Hosted by Boston rapper Kadeem, Nightworks, like LET before it, features resident DJs (Gilman, DJ Manipulator, Inspektah, and Gnat), immersive digital projections (courtesy of media artist/designer Samo), and guest appearances from rising and revered producers outside of Boston. (Past guests include Elaquent, House Shoes, and LET stalwart Dibia$e.) Originally held in an art gallery on Newbury Street—a moneyed commercial strip historically unfriendly to hip-hop shows of any kind—Nightworks recently moved to Backlash, a brewery in Boston’s Roxbury neighborhood. In addition to its main attractions, Nightworks has pop-ups from record stores, thrift stores, and Union Sound, a music tech shop and studio in the Boston-adjacent city of Somerville that doubles as a creative space and clubhouse for nascent producers in the area.

“[The Boston beat scene has] been bubbling for the past five-10 years, and we all really feel like it’s about to explode,” says Erik “Loman” Sarno, the producer behind Union Sound. “[Nightworks’] impact is undeniable.”

Gilman feels an increased energy in Boston’s beat scene. All of the recent Nightworks shows have sold out. The demand for more beat shows is so high that he and Loman co-created Nightworks spin-off  “& Friends,” which they hold at the Canopy Room in the Bow Market area of Somerville. There are also other beat events popping up, like those thrown by The Stew and The Shift. Most importantly, there’s a diverse and growing number of producers from and in Boston, including but not limited to wowflower, Grubby Pawz, Catman, Dephrase, and Lightfoot. Gilman and his peers are working tirelessly to make sure they’re heard at home and, eventually, around the world.

“I’m trying to be a force that brings in a new generation,” Gilman says. “There are people with that potential.”