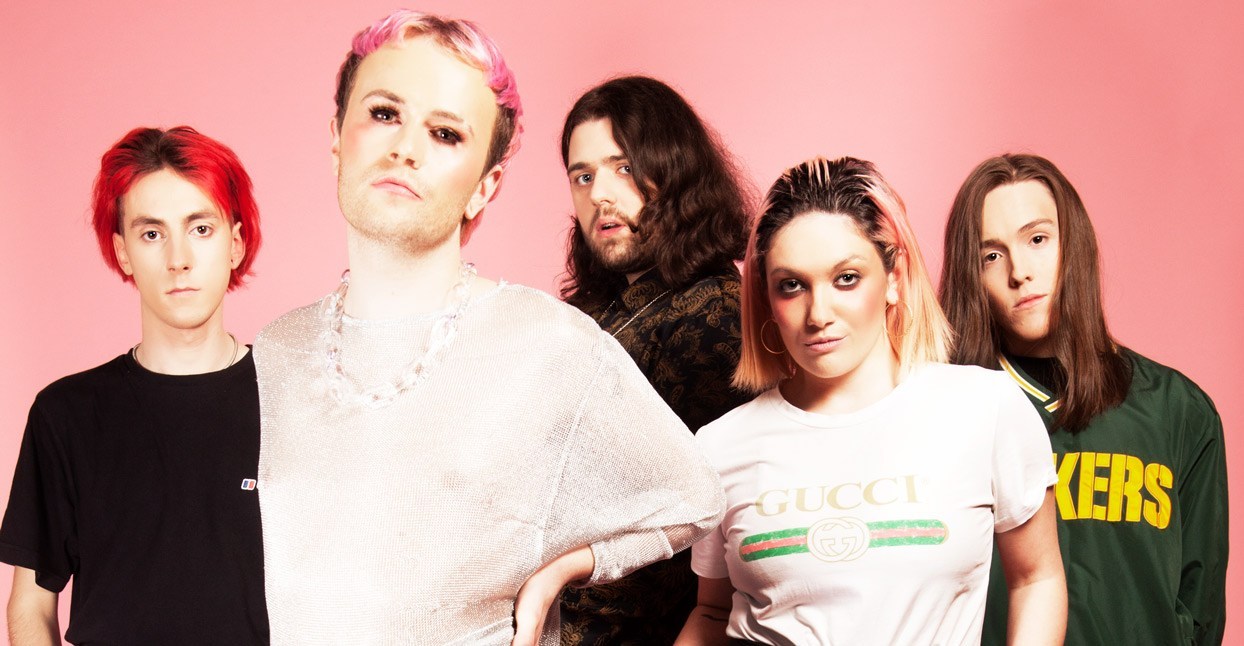 Fronted by the ineffable Zena Davine, the five-piece band Queen Zee, a riotous noise-pop outfit careening out of the U.K., exists as a kind of mandate against the ideological status quo. “There is [an] apathetic wave of music at the moment that is so safe and so minimalist that it’s kind of nothing at all,” says Davine. “It’s indie boy bands making landfill music that sounds like a fucking ringtone. There’s no color, no vibrancy, it has nothing to say. It feels like the opposite of everything art should be. We want to be the antithesis of that. Queen Zee wants to be the brightest thing it can be.”

To that end, the songs on Queen Zee’s eponymous debut full-length are not only bright—as in, burn-out-your-retinas levels of brightness—they also reflect the gleefully haphazard, DIY nature of how the group has always operated. Tracks on Queen Zee zig and zag between grunged-out, poppy punk  (“Loner,” “Lucy Fur,” “Hunger Pains”), sleazy paens to gay sex (“Porno”), and multiple tracks that serve as a ragged, glammy call to arms. In that spirit, the record crests with “Sissy Fists”—a stadium-sized queer anthem that is equal parts defiant and celebratory—in which Davine howls, “Raise your sissy fists! Raise them! Raise them!” For queer kids raised on steady diets of old Hole and Bikini Kill records, Queen Zee’s message of sweat and glitter is like manna from some kind of gay heaven.

For Davine, the defiance in Queen Zee’s music makes sense, given that it is a band that was literally willed into being. “I’ve been in and out of bands since I was a teenager in Liverpool,” they explain. “We have a really great punk scene, and I was definitely a queer kid coming out in a punk scene, but the band was born out of my own frustration. I was running my own DIY punk shows in Liverpool, and was just like, ‘I’m just going to pretend I have a house band. My house band is called Queen Zee and the Sasstones.’ I decided to start sticking Queen Zee and the Sasstones on gig posters. I posted some terrible demos online and looked for people that could play with me, to make this idea into an actual thing. I wanted to do this since before I was able to do it.”

A few notoriously messy shows and many lineup changes later, Queen Zee eventually transformed from performance art concept into a living, fire-breathing rock band. “As soon as we started, people just instantly responded to the idea,” says Davine. “The music was just barely listenable at first, but people loved the idea of this angry queer band. There’s a lot of very queer music out there, but there’s very few actually-queer punk bands that are heavy and gnarly. So there were people that loved us, and then there were lots of other people who were like, ‘No, absolutely fuck this.’ We exist in a weird space. Within the queer scene, which is all about drag queens and pop music—both of which, I love—they can’t really buy into us because it’s too heavy and too much about playing loud and live. And then, the punk scene doesn’t really want to buy into it because, well, it’s queer. In their minds it’s too much like Scissor Sisters or something. We’re kind of left for the people in the middle, who really, really love it.”

For Davine, the fact that a queer rock band is still—even in 2019—something of a cultural oddity remains a frustrating cross to bear. As a musician with a look that is equal parts Iggy Pop, Leigh Bowery, and Sharon Needles, fronting a rock band is a dream job, but as a trans person, that kind of visibility can be complicated. “The year we played the Reading and Leeds festival in the U.K., I was the only trans person on the lineup, which blows my mind when you consider there’s probably close to 1,000 people performing at those events. When people ask why there aren’t more bands like ours out in the world, I don’t know what to tell them. It may be that trans people and queer people are put off from performing because it means shining a spotlight on yourself and receiving criticism. We get death threats, we get abuse when we play shows, we get serious abuse online. I could totally understand a queer person being, like, ‘OK, I’m not going to put myself in that firing line,’ because it is definitely not easy.”

So why do it? The answer, at least for Davine and the rest of Queen Zee, lies not only in the music itself—messy, celebratory, angry, and joyful—but in the thrill of human connection, of being your most authentic self in a public space. “I don’t know what you can do other than exist,” says Davine. “And hope all of this—the band, the music, us—will continue to exist, and over time the rest of the world will just have to get used to it. After we play shows, I love that part at the end of the night where everyone comes and hangs out at the merch table. The kids aren’t necessarily there to buy merch, but just to hang out, meet other queer kids, and because they love what we are saying and doing.”

“That is such a special and unique thing that we get to experience every night,” Davine enthuses. “We get to go back to the hotel after having that experience. I can never forget how receiving that amount of love feels. It keeps you going.”