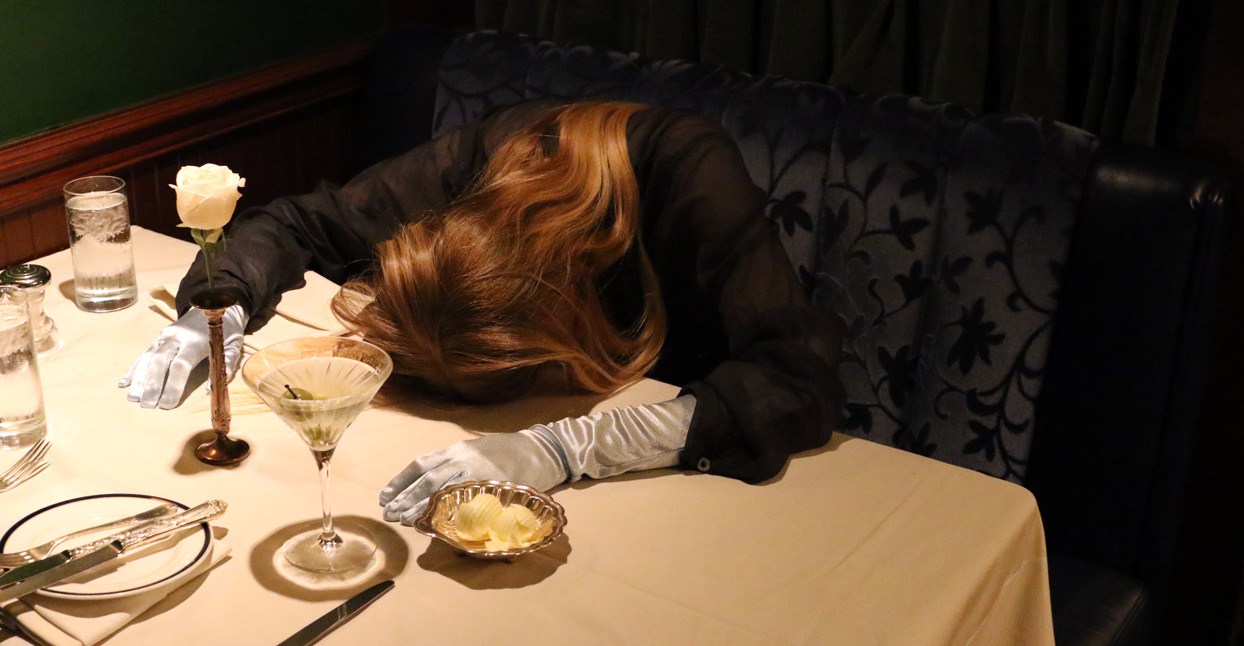 “I’m tortured by the feeling of drowning. Under you, under society, politics, the decay of nature, my lack of interest, and I feel desperate,” Frederikke Hoffmeier intones with quiet deliberation on “Red Desert,” on her new album The Drought. This sense of claustrophobia and existential uneasiness pervades the music she makes as Puce Mary.

As a veteran of the Copenhagen underground, Hoffmeier has developed an approach to noise and industrial music that’s more enveloping than bellicose, repurposing the tropes of those combative styles into cerebral explorations of alienation, desire, and control. She rarely indulges in full-fledged sonic assaults, instead using layered dissonance and amorphic rhythmic patterns to ratchet up tension to extreme levels. On The Drought, her first album for PAN, Hoffmeier uses an expansive set of sound sources, with an increased focus on field recordings, to create surreal environments that resemble sonic manifestations of anxiety and distress.

Hoffmeier collects field recordings compulsively, while in nature or in everyday life. “Whenever I hear something that speaks to me I try and record it,” she says over email. “In the studio I piece them together to create fictions, imitating instruments or using them as a way to try and position the listener into the space I’m trying to create within the piece.” During the course of working on The Drought she developed a newfound affinity for the editing process, finding herself meticulously crafting each individual sound.

That level of compositional precision is evident throughout the album, as elements are brought in and out of focus for maximal dramatic impact, their direct sources often obscured in favor of a larger narrative of disorientation. Shrouded sounds that emerge like tortured shrieks on album closer “Slouching Uphill” are of an indistinguishable origin, the mystery only intensifying the panic they evoke. “Sometimes feedback is manipulated to sound like a violin, a drum machine kick is stretched out to sound like a bass, or a field recording is processed through the Buchla 200,” she says. “Unless it’s important to the story, I don’t aim to be clear what instruments I use.”

The exacting consideration of the sense of space that the music evokes was partially inspired by a recent residency and performance at MONOM in Berlin, which features unique equipment that allows artists to explore “spatial sound as an expressive medium.” She describes the experience as “an epiphany about the roles space can play in listening. Yes, physical space, but also space as in where you ‘put’ the listener, and the velocity of that listener-putting.”

As carefully constructed as much of her work is, Hoffmeier finds inspiration in the injection of chance and into the creative process, as pioneered by the experimental music legend John Cage; that spontaneous approach, she adds, doubles as a chance to get out of her own personality. “I use these ‘accidents’ as an extension of the subconscious,” Hoffmeier explains. “I wouldn’t make music if I was able to explain it completely or knew exactly what I was doing.”

In embracing the hidden motives and clandestine impulses lurking just below the surface of conscious thought, Hoffmeier is experimenting with conception of the self, a recurring theme lyrically throughout the record. “The Transformation” offers a scene of intimidation between a narrator and an outside personality in which both lose their corporeal form. Over an ominous, dissonant drone and a slow pulse of kick and electronic snare she murmurs, “I freeze then I liquify… I rise and I bellow, an abstraction.” Before exploding into rushes of distortion and ever-growing waves of discordant sound she states, “I pull a hair out of my mouth / But that is not a hair, and that is not my mouth.” The existence of herself as a definable quantity is questionable as she slips into a liminal, transformative state.

As she explores transformation in personal and psychological realms, Hoffmeier is also pushing power electronics and industrial music into new spaces—though she is probing the boundaries of the genres carefully. “I’m trying to share an idea through a certain vocabulary,” she says. “It is a struggle to maximize what you can do with the vocabulary, the structure of that musical style, without subverting what is making that structure functional and that vocabulary powerful in the first place.” The Puce Mary catalog, overall, is full of moments that maximize the vocabulary of what her label describes as “confrontational music.” Though there is little sense of liberation, and the sense of foreboding doesn’t let up once throughout its duration, The Drought offers a sense of emancipation from solipsistic, anger-fueled noise, towards a more nuanced vision of turmoil.