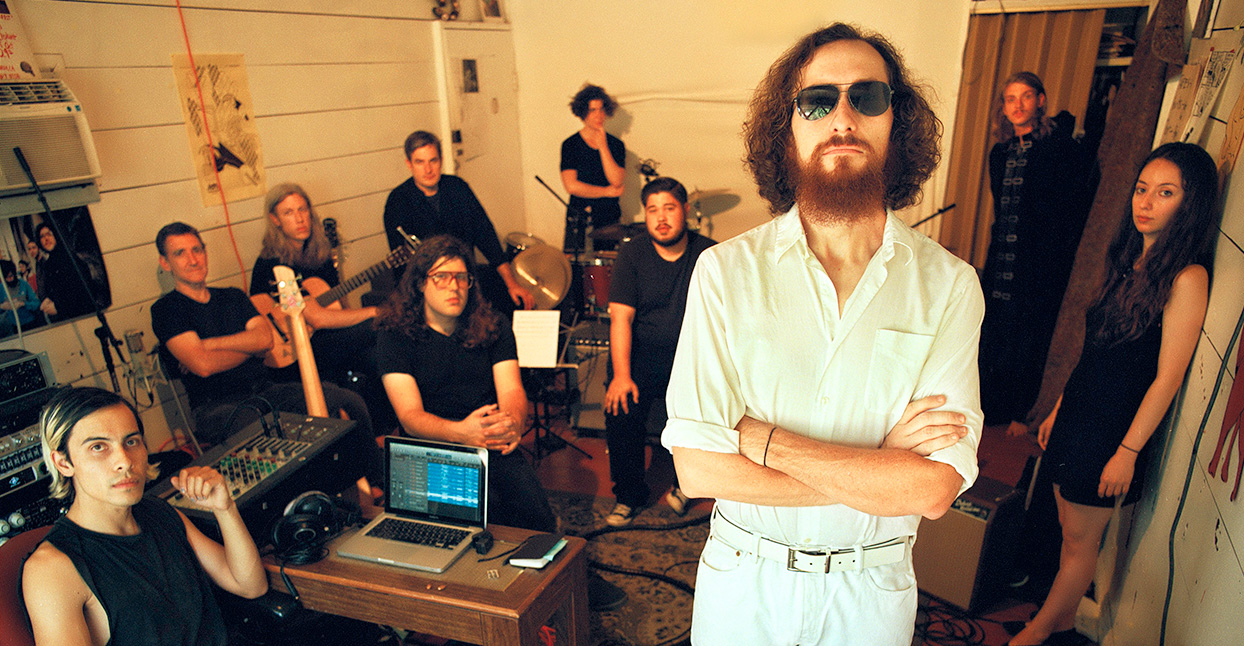 The music Chris Schlarb makes as Psychic Temple is almost eerily serene. On III, released in May of this year, he strung soft, beatific vocal harmonies over gently chugging folk-prog. On their 16-minute cover of Brian Eno’s Music for Airports, notes were stretched out almost infinitely, to mesmerizing effect. In that context, the latest Psychic Temple 7″, Two Songs About Cults takes on a slightly sinister air—not so much music for relaxing as music for hypnosis. This isn’t accidental: Schlarb is fascinated by the psychology of cults, and he frequently works this interest into his music (For one: he’s in the process of assembling a list of classic pop songs that sound like they could be sung by cult leaders). And while the first song on the 7″ could scan as either a breakup ballad to a lover or a splinter sect, it’s the B-Side that’s truly sinister: a cover of Tears for Fears’ “Everybody Wants to Rule the World.” In Schlarb’s hands, the song becomes shadowy. “Even while we sleep, we will find you acting on your best behavior,” vocalistAaron Roche croons. Like any good cult leader, he delivers a sinister message in lulling, dulcet tones.

On the advent of the premiere of Two Songs About Cults on Bandcamp Daily, we spoke with Schlarb about his curious pastime and his superhuman work ethic.

So, by my count, this is the third record you’ve put out this year—you did III, Plays Music for Airports, and now this one. Is there an upside for you as an artist, to be so prolific?

I’m always pretty busy. It’s what I do for a living, I’m always producing someone else’s records, or one of my own. In the last year, I’ve kind of hit my stride a little bit. I’m in Virginia right now producing a bunch of records. It’s like how, if you’re a writer, the more writing you do, the better you get at it. I think the same goes for any trade. The more I’ve played music, and the more I’ve produced records over the last few years, the more accomplished I feel, and the faster the turnaround on each record. I did the Music for Airports record in an afternoon. We started at 8am and we were done by 3pm, and there are no overdubs. It only took another day to mix. By contrast, the first Psychic Temple record, which is probably the record that sounds the most like Music for Airports, took two years—and they’re only separated by a few years. So what used to take me two years now takes me an afternoon.

It only took you an afternoon to make Music for Airports? That’s insane. Did you have it all notated before you got into the studio with the musicians?

All I did was write out the eight-bar melody, and I sent it to the trumpet player who’d be playing it. That was pretty much it. The way that piece came together is that I had this lightbox, which has a bunch of switches on it so I can control the lighting around all of the different musicians in the room. So in a situation like that, everybody knew that the rules were when the light in front of you is off, you don’t play. When your light is on, you can play. It’s fun when there’s a little bit of confusion in a situation, so I’ll often try to create my own little pockets of chaos.

I wanted to talk about cults for a second—which are kind of the opposite of chaos. I feel like I’ve seen the “cult” motif turn up a lot in your work. This 7” is called Two Songs About Cults, I’ve seen you in press materials referred to as a “cult leader.” What’s the fascination with cults?

Initially, it was just two of my interests overlaping. I’m obsessed with music, and I’m kind of obsessed with cult psychology. As I started getting deeper into it, I was thinking, ‘Wow, what’s the thought process behind this?’ And then I started seeing all of these conceptual overlaps between cult psychology and band psychology. For example: in a band, you’re essentially proselytizing by going on tour. Every band has a ‘uniform,’ whether they say they do or not. You’re going from city to city trying to gather new followers. It’s kind of fascinating. And then, on a broader level, the ‘cult of personality’ idea is fascinating to me. You have someone like Kanye or Beyonce—they have a legion of people who will go wherever they go. I’ve been getting a little more into the Grateful Dead lately, and the idea of people following you around from city to city creating a lifestyle for people to emulate—there couldn’t be anything more cultlike.

And yet the first song on the 7”, “S.O.S.,” doesn’t sound especially “culty.” The first time I heard it, it felt like a love song.

I love that. Every time I sit down to try to write lyrics for a song, I’m hoping there’s at least two meanings. The best songs are the ones where you can take your own experience and incorporate it so that the song speaks to you in the most personal way. The worst songs are the ones that are just, ‘No, it’s just about this.’

So there were two contexts for ‘S.O.S.’ One was that I was thinking about my oldest daughter growing up and leaving home. I was writing the song from her point of view: ‘It’s time for me to go, I’ve got to get out of here.’ But then I was also thinking, ‘There are also parallels to someone trying to escape a cult.’ Your family is your tribe—that’s your cult. You do everything together, there’s a patriarch and a matriarch. I was just trying to think of it like, ‘I have to write lyrics that would allow both of these interpretations to be true.’ And the more thought I put into there being multiple interpretations, the more it opens the door for many, many more interpretations to be found.

Ironically, the B-Side, which is a cover of “Everybody Wants to Rule the World,” is a lot more overtly cult-like.

Absolutely. I mean, that’s just a great song, isn’t it? It’s a song 100 years from now that people will be like, ‘Goddamn, that’s a great song.’ A couple of years ago, I went on a solo tour across the country, and I had a few songs in my repertoire that I wanted to recontextualize.  ‘Everybody Wants to Rule the World’ was one of those, where I felt, ‘What a great song for a cult leader to sing.’ I also sang ‘I’m Your Puppet’ by Dan Penn and Spooner Oldham. And I started finding that you can recontextualize some of these great old songs with sinister undertones. For example, cult followers are sometimes quite literally puppets. I did “Making Plans for Nigel.” I just love that a song can be funny and scary and sweet all at the same time. Some of the best music is when it hits all of those different notes at the same time. You know that Etta James song, ‘I’d Rather Go Blind’? Fuck—what a great song for a cult follower to sing. When I sang ‘I’m Your Puppet,’ I told the audience that they were dedicating that song to me. All it takes is a little bit of extra layering and all of a sudden the song gets deeper.