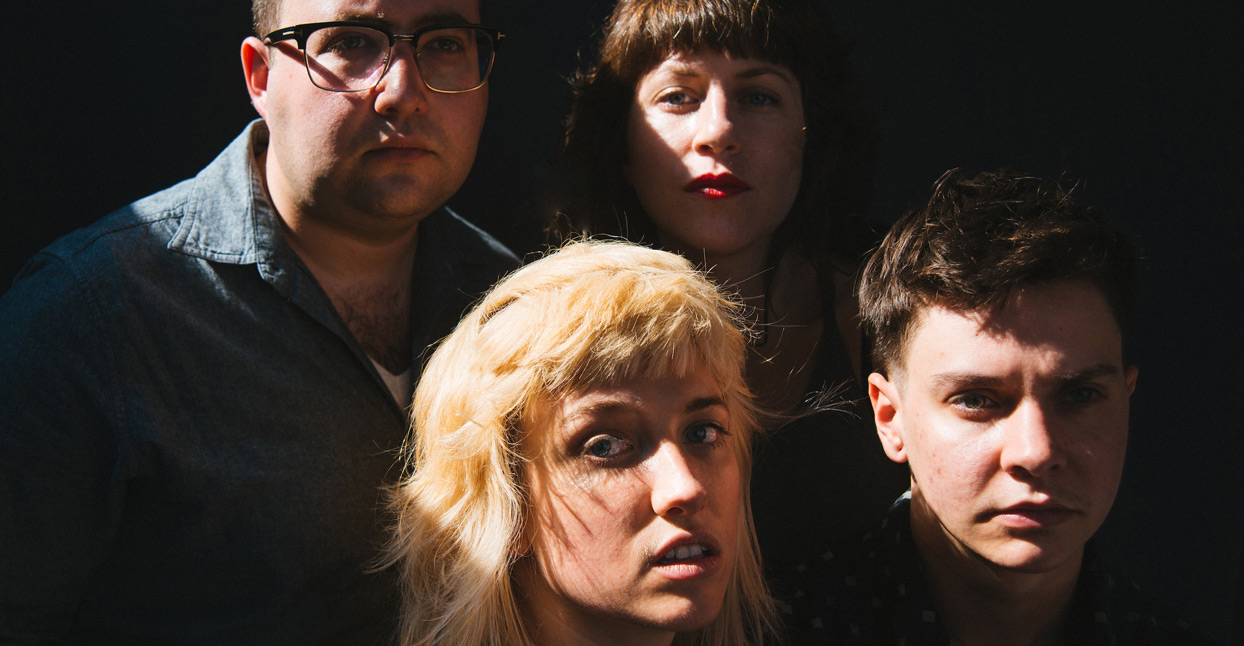 We’ve only been speaking for a few moments when Katie Alice Greer, lead vocalist for the D.C. band Priests, lets loose with a laugh. “We did another interview earlier today,” she says, “and the writer said, ‘You’re a difficult band to prep for. There isn’t one linear storyline about your band.’ We were like, ‘Yeah, I mean, we kind of designed our band that way on purpose. Sorry [to make] more work for you, but that’s very much intentional.’”

Intention has been a core part of the group’s ethos since their inception. They operate democratically, with all four members having equal say in both the group’s music and business dealings. Five years ago, Priests formed the record label Sister Polygon as a way to release their own music, before expanding the imprint to include groups in the band’s geographic and spiritual circles, bands like Sneaks, Downtown Boys, and Hand Grenade Job. On their official debut LP, Nothing Feels Natural, Priests feel sleeker and more stylized than they have in the past, opting for polished vignettes in lieu of blunt-force intensity. Greer sings more than she shouts, and her lyrics are more oblique, though the group’s notions aren’t any less political.

“My own personal perspective on the band [used to be], ‘I wanna form a band that’s giving a middle finger to passive complicit rich people. I wanna give a middle finger to people who think you have to be really technically proficient or a dude to be in a band,’” Greer says. “I was really into being antagonistic and being really literal and topical with our politics. [Now] I would much prefer to be subtle, and for the people who are already thinking about these things to be able to engage with that.”

The instrumentation on Nothing Feels Natural roams well beyond rock band convention; its songs feature mellotron, bass clarinet, oboe, even a cello interlude. Some songs, like the expansive opener “Appropriate,” burst open into clanging, dissonant piano or screeching sax. “We wanted something that stands on its own as a recorded piece of music, outside of but in tandem with what we do live,” says bassist Taylor Mulitz.

At the time of our conversation, the band was busy packing records in Mulitz’s apartment, the last of several long days of shipping pre-orders. “We really want to finish tonight,” says drummer Daniele Daniele.

Nothing Feels Natural was in limbo for much of the past year, following a botched first pass at a recording session in Olympia, Washington last January. Scrapping the session was an expensive and heartbreaking decision that took months of deliberation. “We learned as artists that we are much more of a studio band than we had been before,” Greer recalls. “We’re not just a band where you record what happens live and it just sounds great—at least, not with these songs. We wanted multiple layered vocal parts, we wanted to overdub weird sounds, [stuff that] you couldn’t really do if you were just recording to tape.” Simply put, the first pass at those tracks didn’t live up to how they could—or should—sound. “We had a very big vision going into it and we just weren’t able to achieve it the way we wanted,” guitarist G.L. Jaguar says.

The group returned to the nation’s capital and recorded with Kevin Erickson and Hugh McElroy, who had worked on over half of the band’s recordings up to that point. Nothing Feels Natural ended up as a sharp stylistic departure from the band’s previous releases, one that attempted to capture the group in their explosive live configuration. “I don’t think the music sounds belabored, despite the fact that it was,” Daniele says. “I’d like to think that what we were trying to make doesn’t mirror necessarily the process by which it was made.”

That difficult recording process was a result of the band’s rigorous interrogation of why and how they should operate. Up until this year, Priests managed everything themselves: releasing and financing its records, and handling publicity and tour bookings. This isn’t a new story—there are, have been, and will be countless bands who have done the same. But it’s worth noting in this case, because Priests chose to dive into the professionalized milieu, inserting themselves into a world that revolved around publicists, booking agents, and record labels, all while representing themselves on all fronts. The goal was twofold: to be uncompromising in art and to imagine and build a framework for cultural production that pays a living wage.

“I think I thought, for a long time, that Taylor and I would be able to fairly negotiate what we should get paid in each city [on tour],” Greer says. “Priests keeps a spreadsheet—Daniele is in charge of this—of every city that we’ve ever played, how the show went, how much we got paid and how many people came to the show. It was very easy for us to be like ‘Actually, that’s really not a fair offer you’re making for us, the last time we played this town, x number of people came.’”

Despite this clear and conscious decision-making, the band still ran into roadblock after roadblock. “I really thought that if we were just putting in the work it would work out,” Greer says. “But there’s still a ceiling where there shouldn’t be. This year, we’ve hired a publicist, we’ve hired a booking agent, we work with a publisher now for our music to make sure we’re being compensated by anyone who wants to license that. But we hired all of those people once we understood exactly how all of those jobs worked, and once we knew how to instruct them how to do that work.”

The band is clear that its methodology shouldn’t be interpreted as a grand political statement. She says, “I think that that gets weirdly romanticized—this band worked so hard and they spent so much and now we have this. It’s this myth of capitalism, really fetishizing hard work. I think people should know that we put in this work ourselves, but I don’t want that to be pushed to the forefront in front of our music. We spent a fucking long ass time writing these songs and making them sound exactly how we wanted them to sound because we had really particular ideas.”

Still, it’s hard to separate the band’s modus operandi from the album, which can work as an allegory for the life of a creative and conscientious person sagging under the weight of late capitalism. One song, “Puff,” takes aim at the culture industry directly. The line “Accept the triumph of the machine” seems particularly prescient. Dogmatic Priests fans might see the band’s new approach as “giving in”; a more generous take would be that Priests are a band who are making the system work for them, that this approach really isn’t new at all, but rather simply a continuation of a five-year project of self-advocacy. Reality probably falls somewhere in the middle.

“We might be a little standoffish with a lot of stuff in the music biz because we’re always like, ‘What is that?’” Daniele says. “It’s like a piece of food. Some people will just be like ‘Whatever, eat it,’ but we’re kind of, ‘What’s in it? How was it made?’”

“Where did it come from, where did you buy it?” Greer continues. “I don’t really feel like at this point we’ve had to compromise at all. I’m proud of every single decision that we’ve made as a band.”