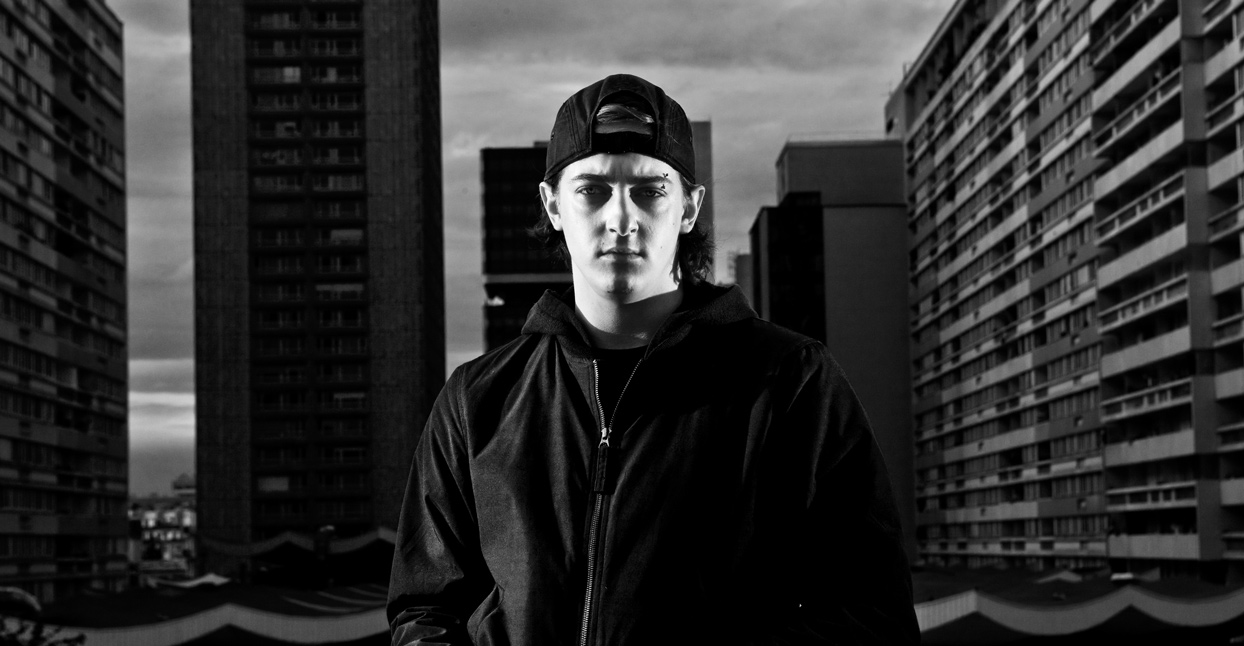 If we could add one name to our lengthy, but by no means comprehensive, synthwave list from last year, it’d be Perturbator. While elements of the Stranger Things-era have crept into James Kent’s compositions over the past five years, his plans for the project are far more ambitious than any mere novelty act or nostalgia trip. In fact, they venture further out into left-field with each passing LP, as leathered-up electro and EBM loops give way to gritty techno grooves and beats that are blown into a million pieces.

“Music is the ultimate form of expression,” Kent explains over email. “It should never ever feel restrictive. People who are looking for ‘80s nostalgia can already find it everywhere. There are blogs dedicated to promoting this type of music and posting stuff that sounds like that every day.”

Some of those outlets—the more regressive ones, at least—may be a little mortified by Kent’s latest EP, New Model. True to its title, it’s a welcome reboot of Perturbator’s robust sound, starting with its creepy lead single “Vantablack”. With the help of OddZoo singer “Jim” (see also: the deep Carpenter Brut cut “Anarchy Road”), Kent appears to be telling the tale of a lecherous robot that’d like to “play with my shiny stainless blade and stroke your marble skin.” It’s very Nine Inch Nails-meets-Vangelis, and it’s deeply unsettling.

Then there’s “God Complex,” a nine-and-a-half-minute descent into Perturbator’s own personal hell, that takes the jagged melodies of Justice on dark-ambient detours, and culminates in a pulse-quickening climax that offers a hint of Kent’s previous life as a metal musician. “I got to a point where I realized that I’ve said everything I had to say in this department,” Kent says. “Now, I’m moving forward, discovering new sounds, techniques, textures, and ways of presenting my music to others.”

In the following exclusive conversation, Kent gives a taste of what that means for Perturbator’s past, present, and once-uncertain future.

Let’s start with a little background: What’s the first memory you have of obsessing over a piece of music?

I believe it was Slayer’s Reign In Blood. I was a very young kid. The track ‘Altar of Sacrifice’ especially struck a chord with me. To me, it was the most intense piece of music ever written. The lyrics truly made me feel like I was doing something wrong, too. Even though now I find South Of Heaven to be a superior album composition-wise, Reign In Blood will always have a special place in my heart.

When did you start making your own music?

I started to take it seriously around 2008, when I taught myself how to play the guitar with the intent of writing music and playing in bands.

What kind of metal did your earliest bands play?

We played a variety of different styles, from death metal to hardcore. Even dabbling in some math rock, black metal, and djent at times. Everyone had their own influences, so the genres never really mattered; we were just teenagers and wanted to make some heavy music.

Why did you decide to stop playing in bands and start recording music on your own? Was it simply a matter of wanting to express and embrace your own ideas without having to run them by other people?

Basically, yeah. The bands I was playing in were all more or less falling apart and I had so many ideas I couldn’t fully develop in this context. I figured I would be better off making music at home.

You could have cut a solo guitar record on your own. Why produce electronic music instead?

I’ve always found most solo projects from guitarists to be a little bit too vulgar. Most of them feel like a weird display of skills and fail to suck me into their world. It’s a tough exercise, and I’m sure it can be done right, but it’s just not what I look for in music.

Electronic music lets you be both the orchestra and its chief conductor. You play all of the instruments, and you lead the music wherever you want it to go. This freedom is what attracted me in the first place, and it’s still what I love the most about it. It was difficult in the beginning, but everything is.

What are a few records or artists that inspired Perturbator early on—the records that showed you what was possible with aggressive electronic music?

I could give you names like John Carpenter or Vangelis, like I always do. But, more precisely, I think it all started when I heard the track ‘3:16’ by the French electronic musician Danger. There’s such a strong sense of aggression, an intensity to this track that I cannot really explain. It’s cold in its precision—the beat is extremely tight, the rhythm is fast, the bass is drowned in distortion—and the subtle synth arrangements that expand in the background really blew my mind. There was a special violence in this track that I couldn’t find in any metal songs. It proved to me that electronic music could be more than just computer sounds. It’s a different language. A language that I wanted to learn and use.

What are some artists or records that have influenced you in recent years that would surprise people?

I’ve always been very open publicly about the music I listen to, so I’m not sure it will come off as a surprise to anyone, but I’ve recently been listening to a lot of trap and hip-hop. I’m talking about the dark and gritty type of stuff, like Ghostemane, Maxo Kream, or Lil Ugly Mane. I’ve also been coming back to a lot of goth rock and EBM/industrial music like D.A.F. or Front 242 as well.

I love how New Model is a fresh start for your sound—rejecting tired synthwave tropes for a darker, more dynamic vibe. Can you pinpoint your decision to shift gears down to a certain moment?

I’ve always admired artists who could switch from genre to genre without losing their sound and style. It’s something I always tried to aim for, as I believe that constantly doing the same thing over and over is pointless at best and harmful at worst. I fully realize that it involves disappointing some of my audience in the process, but it’s of extreme importance to me.

With New Model, were you specifically aiming to make something unsettling?

New Model is probably the most atypical Perturbator release so far. It’s not trying to make you dance, or remind you of a certain era. There’s a certain sense of frustration to it all that I wanted to capture and inflict on the listener. While Sexualizer explored the lighter, more pop-oriented parts of my music, New Model goes the completely opposite direction and dives into the truly hateful and twisted parts of it—which can make it seem like a very chaotic and unapologetic release for some, I guess.

Without getting too personal, can you tell me a little bit about where your head was at while making this record? It certainly sounds like you were going through a rough patch for a minute there….

This release was written during a particularly somber period of my life, yeah. It’s no secret that I’ve always been an extremely pessimistic and nihilistic person, generally speaking. I wake up everyday looking at what’s going on around the world, and I feel disgusted and ashamed for being a part of it. This, combined with other more personal problems—feelings of self-loathing and constant dissatisfaction towards everything I do—certainly plays a role in the tone of my compositions. These are sentiments that I always tried to convey into audio form, and it’s at the core of almost every piece of music that I write.

Do you feel like making these songs helped you feel better on some level? Was there a light at the end of New Model’s respective tunnel ?

Yes and no. New Model, to me, is like throwing up after having too much to drink. It felt needed, and it did somehow make me feel better at the end of the day. But it doesn’t resolve anything. It’s just a bunch of ideas and confused feelings that I needed to get out of my stomach. It shouldn’t be pleasant; it’s just important that it exists.

One of the main concepts on the new record is how artificial intelligence could harm instead of help us. How do you personally feel about the continued move towards robotics in the tech field—things like self-driving cars?

I just see it as a step towards the dehumanization of modern society. I believe it is inevitable, really. I even predict a distant future where in-the-flesh interactions become obsolete, probably creating a general sense of miscommunication, misunderstanding, and a real lack of general empathy towards others. I don’t particularly condemn it, nor do I welcome it. I’m just a curious bystander.

Most of your music is driven by a clear narrative. Have you always been that way, coming up with stories and fantastical concepts at an early age?

Stories helps me keep focused. Sometimes I need it when I don’t want to stray too much from the theme and concept of a release. The story of New Model is extremely secondary, though, and is not really the main point of the EP . But yeah, I guess I’ve always been like that—imagining stories to go along with albums that I enjoy and trying to figure out what the artists wanted to say.

What’s the best and worst thing about the digital age?

Between little kids putting out shirtless selfies for everyone else to see, live streams of real murders, awful [online] communities, and the fact that you can access and discover new stuff everyday, share your thoughts with people you’ve never met and use it as a platform to present your art, I personally think the Internet is both the worst and best thing about the digital age we live in.

Now that this record is wrapped, where do you see this project heading next? Do you feel free to experiment even more in some ways?

Absolutely. I can now see a future for Perturbator, musically speaking. I’ve already started to work on some new material and I’m thinking about doing something very ambient. We’ll see.