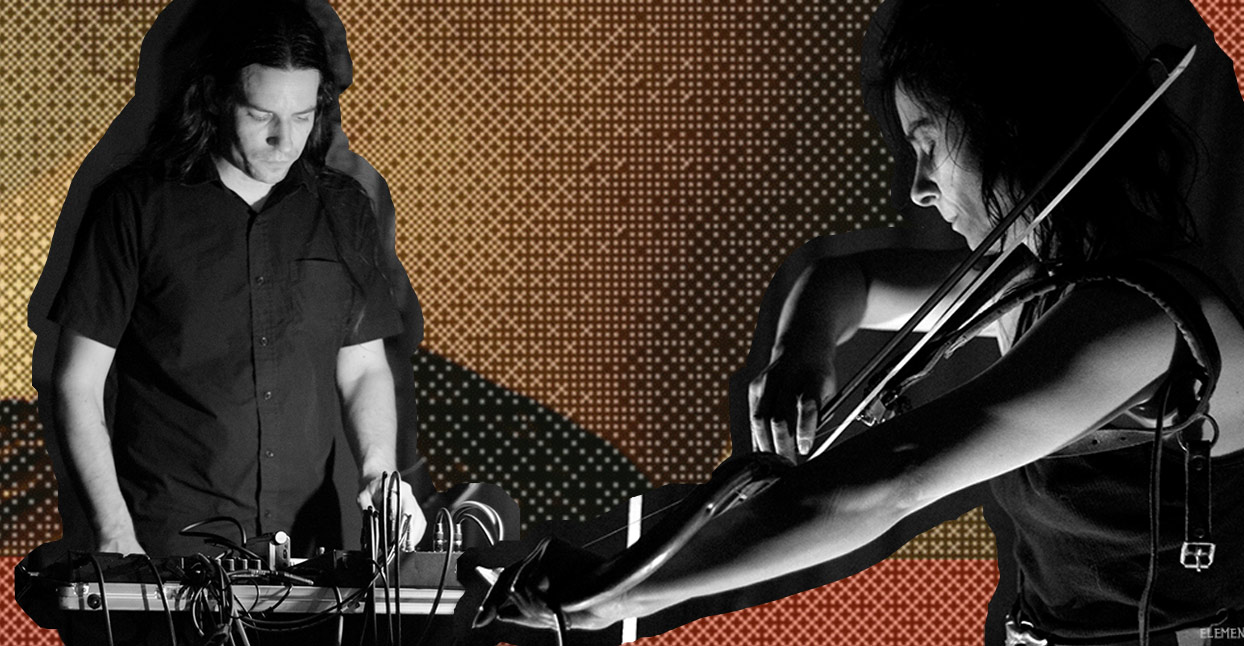 Shannon Kennedy, of Los Angeles’s kinetic experimental duo Pedestrian Deposit, is describing the location of our interview: near a dumpster filled with dangerous-looking balls of wire and a car hood, in Tulsa, Oklahoma’s arts district. Inside a nearby warehouse, someone is screaming at the top of their lungs over piercing waves of feedback—one of several acts in the 2019 edition of Tulsa Noise Fest. “This is the perfect setting for the interview,” deadpans Jon Borges, Pedestrian Deposit’s other half.

Pedestrian Deposit have been making meticulous, intentional electro-acoustic music since 2000, pushing both their sonic and physical limits by using self-made instruments that require both intense strength and unflagging endurance to successfully manipulate. The duo empty themselves into their live performances: Borges creates sound using analog electronics and room mics that spit piercing feedback; Kennedy goes from thrashing her body against her giant, hand-constructed instruments to playing a striking, meditative passage on her cello.

Borges and Kennedy are in the home stretch of their tour, having spent the last month lugging a PA, electronics, merchandise, and those self-made instruments across the country and back. Indeed, every aspect of being in Pedestrian Deposit requires endurance—the long drives, the fierce physicality of their live set, and the length of their tour. Yet, on this Saturday in Tulsa, next to a dumpster full of reeking steel wool, they couldn’t be happier. Kennedy laughs once again at their surroundings and asks, “So what do you want to know?”

In March, Pedestrian Deposit released a new album—Dyers’ Hands, their first in nearly four years, and one that perfectly balances organic, musical passages with classic crunch. The album’s first track, “Crow Theory,” is one of the more heavily edited, layered recordings in the collection, featuring a mix of Borges’s noise and Kennedy’s, “more material, primal instrumentation.” Borges speculates there are between 25 and 30 stems working in conjunction on that one song alone. Others, like the touching cello piece “What Can’t Be Taken,” are recorded more simply; for that one, they recorded it live, using both a direct input along with multiple room mics, creating a “surround sound” effect.

Like everything Pedestrian Deposit do, Dyers’ Hands was the result of perseverance. “The process of putting together Dyers’ Hands was basically three weeks of 14-hour days for me,” Borges says. Kennedy counters, “Well, that’s the final stretch. A lot of the material on this comes from some of the tours we did between 2014 and 2016, and up to the present.”

Pedestrian Deposit started when Borges was still a teenager; the first tapes released under that name in 2001 were essentially a solo project. “I was putting out tapes as far back as 1997,” he says. From an early age, music served as something of a salvation for Borges. “In my very young pre-teen life, I had started to go down a path of juvenile delinquency. I was interested in music, but those two things were canceling each other out, and I was leaning more towards becoming a juvenile delinquent,” he says. “My mom pushed me in the direction of music.”

The earliest Pedestrian Deposit material was fairly straightforward harsh noise released on Borges’s label Monorail Trespassing, on which he has steadily released noise and experimental music by mainstays like Aaron Dilloway, Werewolf Jerusalem, and Shredded Nerve on cassette, CD, and vinyl. Pedestrian Deposit quickly shifted away from the pure crackling of Borges’s early outings. Releases like 2004’s Volatile featured extended ambient passages—see “Naomi (In and Out of Consciousness).”

In 2008, while recording Austere, the solo project became a duo with the addition of Kennedy’s cello. She grew up in Connecticut, where her creativity and archival tendencies were encouraged both by her family and the surrounding environs. Early on, she became interested in collecting objects from both natural and man-made worlds—the decayed industrial buildings of rural New England became a playground for her nascent object worship and instrument creation, as did the forests and mountains around her. Kennedy’s original background was in dance, though music had always been a major interest and creative outlet. She wanted to be a ballet dancer, but when the time came to decide her life path, she opted for theater, and then for set design, laying a clear path to the instruments she would build for Pedestrian Deposit. “They are set pieces,” she says. “They’re physically-activated musical set pieces.”

The duo’s most recent tour shows off a couple of creations—a violin made from a tree branch and an amplified metal platform that generates sound from tension and from being struck. Borges wields two room mics that he uses to play with feedback; in one section of the live set, he uses them to pick up Kennedy’s sound. Borges uses a lot of electronics, but not much in the way of synthesizers, except for the Make Noise 0-Coast that features in one short, simple section. Considering how much of the duo’s music sounds synth-made, that minimalism is impressive.

Kennedy says the project’s performance and tour schedule is about “Discovering our own limits,” but also mentions that they are realistic about what they can do. “That’s how bands break up,” she says, “when people go past what they’re physically and mentally capable of doing.” Borges agrees, adding, “I would say we push ourselves right up to that point.”