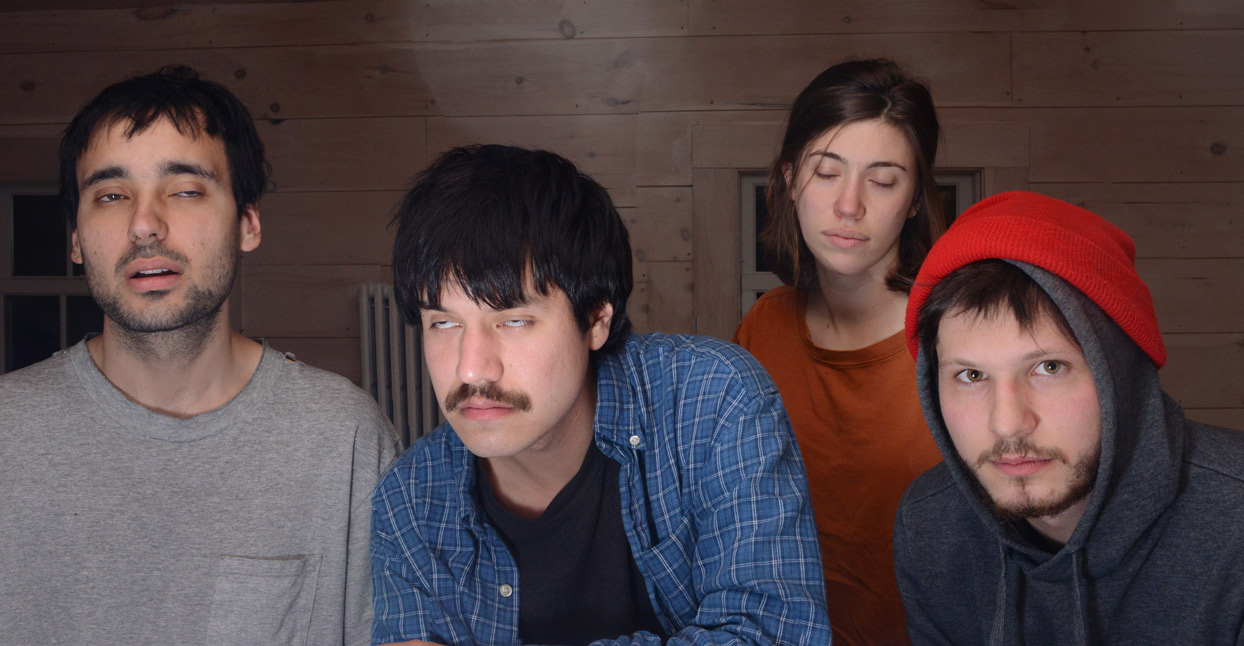 If you find yourself at a Palm concert anytime soon, prepare to be surprised. First, because the Philadelphia-based quartet’s music takes so many weird twists and turns; and second, because they have a habit of sidelining the songs you might’ve heard before in favor of ones they’ve just written. “We’re always seemingly playing something that’s not released,” singer-guitarist Eve Alpert tells me over the phone as she walks home from a post office errand in North Philly. “Touring is our opportunity to rehearse new music.”

Alpert, singer-guitarist Kasra Kurt, bassist Gerasimos Livitsanos, and drummer Hugo Stanley had just returned home from one such tour in December 2015, when they made their excellent new EP, Shadow Expert. The shows had been booked to promote their full-length debut, Trading Basics, but as usual, Palm was miles ahead. “We were so tired of [Trading Basics] by the time it came out,” Alpert says, citing the album’s free-form, improvisatory style and “tacked-on” lyrics and melodies. The new material they’d been road-testing was more concise, even accessible, without losing their unpredictable edge. “We were excited because it was more harmonically pleasing, but also more rhythmically unsettling,” she says. “It felt like a massive step forward.”

Eager to record while their ideas were fresh, the band headed to Brooklyn’s Studio G, where their friend Matt Labozza works as an engineer. He gave them what Alpert calls “a very nice ‘friends’ deal” on studio time, letting them knock out the six songs that appear on Shadow Expert in two afternoons. “We were pretty tight from the tour, so it didn’t require a lot of overdoing,” Alpert says. “It was very fast, which was right for those songs.”

Everything on the EP was recorded as simply as possible, typically tracking the band’s voices, guitars, bass, and drums in one or two live takes. The intricate looping and skipping patterns—particularly on “Sign to Signal,” the song they spent the most time working on—were inspired in part by the dazzling footwork innovations of DJ Paypal and the late DJ Rashad, whose 2013 LP Double Cup was in heavy rotation during the creative process. “We were trying to apply [those techniques] to our own instrumentation,” Alpert says. “There’s something so rhythmically off-putting that we can really relate to, but it’s also uber-melodic. It feels like you’re falling over, but you never lose the rhythm.”

More recently, Palm’s members were blown away by Jlin’s Black Origami. “She’s the future,” Alpert says. “It’s our album of the year, easily.”

Alpert takes this as her cue to sound off on a common misconception about Palm: “We don’t listen to any math rock at all!” While she admits to enjoying Slint’s 1991 classic Spiderland, she disavows any other allegiance to the genre, despite its regular appearance in descriptions of her band. “When I think of math rock, I think of people who [play] really proficiently—and none of us do,” she says with a laugh. “I don’t mean to say that we can’t play our instruments. But we don’t think about numbers or letters when we’re writing. It’s much more bodily.'”

The band held onto Shadow Expert for about a year before signing with the Washington, D.C.-based label Carpark Records, which released the EP this June. Before I have a chance to ask what’s next for Palm, Alpert excitedly volunteers that Carpark will also be releasing the band’s second full-length album, which they recorded this spring at a house in upstate New York. “It feels like the most intentional, planned-out thing we’ve ever done,” she says. “We took a lot more time, and none of it was live. I’m much happier about that process.”

That album’s title and release date are under wraps for now. In the meantime, Palm just released an awesomely trippy animated video for Shadow Expert‘s title track, and they’re heading out for a European tour in September, followed by a run of U.S. dates with Girlpool in October and November. “We’re relearning one or two things from the EP,” she says. “But we’re probably going to mostly play new stuff.”