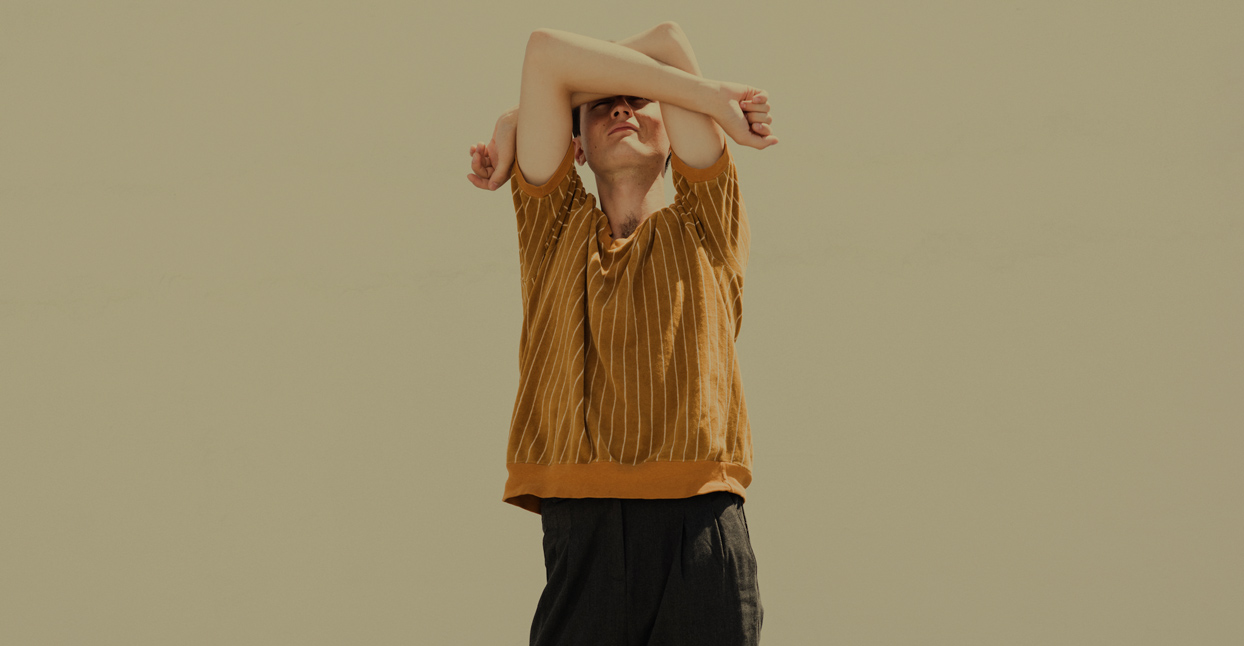 Tim Darcy, the front man of the Montreal-based ensemble Ought, has always been fond of writing lyrics that sting as much as the guitars that surround them. Yet on Saturday Night, Darcy trades in his tightly-wound and sharp, biting commentary for lyrics that are far more intimate. Like Grizzly Bear’s Yellow House or Devandra Banhart’s Rejoicing in the Hands, the album is permeated by a warmth that draws the listener into Darcy’s world. We caught up with Darcy in New York, where he is currently recording Ought’s follow-up to 2015’s Sun Coming Down, to discuss the personal nature of his new album, and how the politically-minded singer is evaluating the state of the union.

One of the most striking things about Saturday Night is that the lyrics feel much more intimate than some of your past work.

I think that’s a huge part of the record, a more direct intimacy; not just in terms of more personal songs, but also in the scope—the size of certain feelings. With Ought, a lot of the themes are painted with very broad strokes. Some of these songs predate Ought, and have been rattling around for awhile. It felt really good to get a finer point out and investigate that. It’s definitely something that I’m drawn to: things that are big because they’re intangible, not zeitgeist[-y].

Are the recordings themselves old, or just the songs?

All the recordings were done in the same period, a series of nights and weekends when I could record with some friends in Toronto who had offered up studio time. Even though there were sometimes weeks in between sessions, it felt really cohesive because it was the same people, the same environment.

While Ought was happening, I wasn’t paying any attention to this side of my songwriting. I’d come back from those tours and be pretty exhausted. There was no immediate goal to carve out a solo career, there was just this very organic desire to document some of these songs. These are the ones that felt like they were coming together to form a record.

Considering the political bent of your past work, I was curious if you feel themes of apathy or disconnect running through this newer music? I was thinking about the line in “Still Waking Up” where you sing, “I’m not awake but still alive.”

I associate [apathy] more with stuff I’ve written in Ought than this record. With this record I just wanted to write and record some nice songs [laughs]. It feels tender. It feels like it comes from a pretty deep place. It’s like when you start falling in love with somebody, you start opening that door a little wider.

I know it’s kind of a silly question, but do you have a favorite song on Saturday Night?

The one that most consistently makes me stop and listen to the record is the last track, “What’d You Release.” I remember exactly where I was when I wrote that. I was visiting my mother in New Hampshire; I had recorded it on a little cassette deck, and was riding back to Montreal in a minivan alone. I had that cassette, and I was playing it in the dark. I remember really feeling it. It’s a very special song to me.

That’s a beautiful image. Speaking of traveling between the two countries, I was curious how you process your bi-national identity in a post-election world?

I still feel very connected to the U.S. My mom lives here, my family does too. It feels like we’ve slid down the ladder. Not to say that Obama hasn’t done things that I feel really sore about. It’s just really sad for me. I was feeling really excited about Bernie and then feeling like [pauses] it wasn’t going to happen. The Trump victory feels almost like a mistake to me. There are all these awful alt-right nationalist people, then there are also people that Bernie was speaking to who voted for Trump, and I don’t think the bulk of them are racist—or not as racist as he or the alt-right are, or as misogynistic as he is necessarily. It feels like something is happening that’s outside of reality. I know that’s not a good way to go forward. Even when I watch him on TV, it doesn’t feel like anything I’ve experienced before, so I don’t know how to react to it.

I was in Santa Cruz right after the election; it’s a beach town south of San Francisco. There was an eerie feeling of being in a bubble totally removed the political reality. Do you feel similarly when you’re in Montreal?

I was thinking about that too, [recording] in New York. People are just going on with their lives and work. I’m just going on with my life. To a certain degree, that’s kind of inevitable. I’ve been thinking of the idea of weaving your compassion for other people, weaving your ability to be more involved, into your life, in a way that doesn’t feel like, ‘There are political people, and there is everyone else.’ Part of that is the way things get talked about—it’s exhausting. It’s fucking awful, obviously you don’t want to deal with that all the time. The media is tearing into your skin. There’s this amplitude, a push and pull, that gets charged up. You put your head in a little bit and suddenly you’re getting blasted. It makes sense to me that people that have stresses in their lives, they shy away from that. That’s what I was thinking about, having engagement be more a part of your rhythm that isn’t so black and white or intense.

In Canada, people are really in tune with what’s going in the U.S. Part of that is because it’s a huge super power next door, but it’s also because there’s an association with the people next door. The borders are tightening; under Trump, there’s the possibility of things tightening further. There are a lot of similarities between the two countries. I’m in favor of freedom of movement. Like with Brexit, there’s a fear of feeling those divisions tightening. You used to be able to drive into Canada with a US driver’s license. It’s a xenophobic response.

I’ve been thinking empathetically about the future of a lot of people. There’s a lot of work to be done, but I don’t want to give the impression that I’m resigned that everything is going to be really bad now. One thing I’ve seen that’s been really inspiring is a lot of people stepping up. The music industry is pretty fragile right now, but bands and labels are still stepping up and donating proceeds to amazing organizations that really need it. That gives me a lot of hope, and I feel inspired to be a part of that. We have to cling to that, to the notion that even though it feels like switch was flipped, there are so many people in the U.S. that believe in working towards better and more equitable way of living and organizing our society.