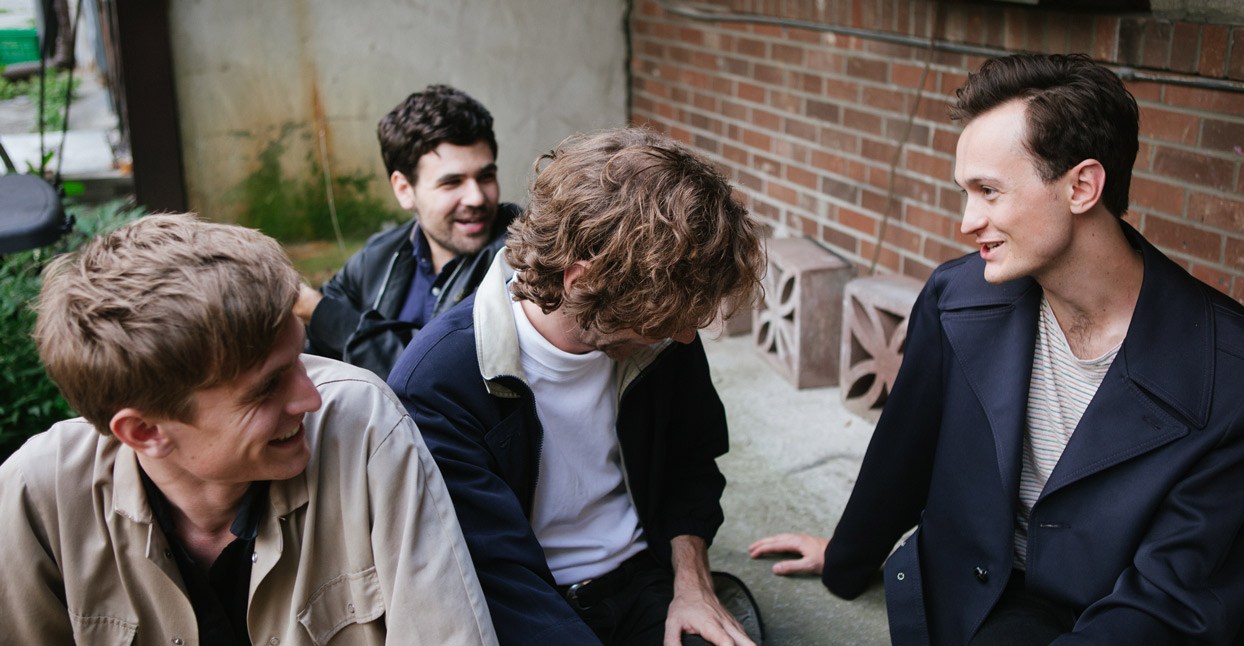 After three thrilling but taxing years spent fronting the Montreal quartet Ought, Tim Darcy needed a break. The group had accomplished a tremendous amount in a short period of time; their first album, 2014’s More Than Any Other Day, was remarkably assured, efficiently sketching out the blueprint for the band’s sound: fitful, snarling post-punk, topped with Darcy’s piercing lyrics, which explored the ways that daily choices are subtly influenced by people in power.

After a world tour in support of that record, they started the process all over again with 2015’s Sun Coming Down. But three years spent globetrotting takes a toll, no matter how romantic it seems from the outside. So for Room Inside the World, their third full-length and first for Merge, the band decided to prioritize deliberateness over the ruthless cycle of record, tour, repeat. The result is the band’s finest work to date, and a striking indication of where they may be heading.

“It’s amazing how much a little bit of downtime can do, as far as regrouping yourself,” Darcy says. The relief in his voice is audible; on previous albums, the recording process was a 100-yard dash: write the songs, record the songs, release the songs, hit the road. With Room Inside the World, the band wanted to flip the script, not just in terms of the writing and recording process, but also when it came to the album’s sonic palette.

On first listen, Room Inside the World is a sharp departure from Ought’s signature mix of post-punk precision and Talking Heads-y pop-funk. There’s a stripped-down glam gem (“Into the Sea”), an ode to ‘90s indie rock (“Disgraced in America”), and a ballad that manages to work a 70-person choir into the mix (“Desire”). Room Inside the World is the sound of a band confident enough to edge away from the wiry, worked-up songs that made them successful in the first place. On the whole, the album feels more relaxed and controlled.

“The thing we were able to get with More Than Any Other Day was a really cohesive statement that really matched what was happening in our live show,” says Darcy. “Before that, as a group of four musicians, we were interested in a lot of different tonalities and sensibilities that weren’t present on the recordings we were putting out. [With this record], it’s not like we’re disowning that stuff, we just had a desire to get back in touch with some of the other things we were doing.

Darcy’s lyrics suggest that, while 2017 was an alarming departure from the norm, that norm wasn’t all that great to begin with. The world is still a frightening and unfair place for most of the population, and 2017 simply helped crystallize what Darcy has been singing about since More Than Any Other Day.

“Part of what I appreciate about the band and the way it addresses politics is that it’s always been interwoven with more general poetic reflection and thoughts about life,” Darcy says. “That’s more true way to us than, ‘Oh, now we need to write the political song to maintain our image.’”

In short, Darcy views political songwriting and evolution more as a spectrum than a single flashpoint, and much of what has transpired over the course of the last 12 months bears that thinking out. “It’s good to be able to parse out what elements are fleeting versus things that have been ongoing, and to embrace the power of realizing that bad things are happening even when we thought our society was doing so well,” Darcy says. “The #MeToo moment is a product of our era. The light is just being shone.”

With Room Inside the World, Darcy and Ought solidify the ideas they’ve been working through since the band began, which can be loosely summarized as: “Things are bad, but evil isn’t new. Our job is to persist, regardless.” Room Inside the World may feel more streamlined, but defiance—red-hot and electric—still pulses beneath its sleek surfaces.