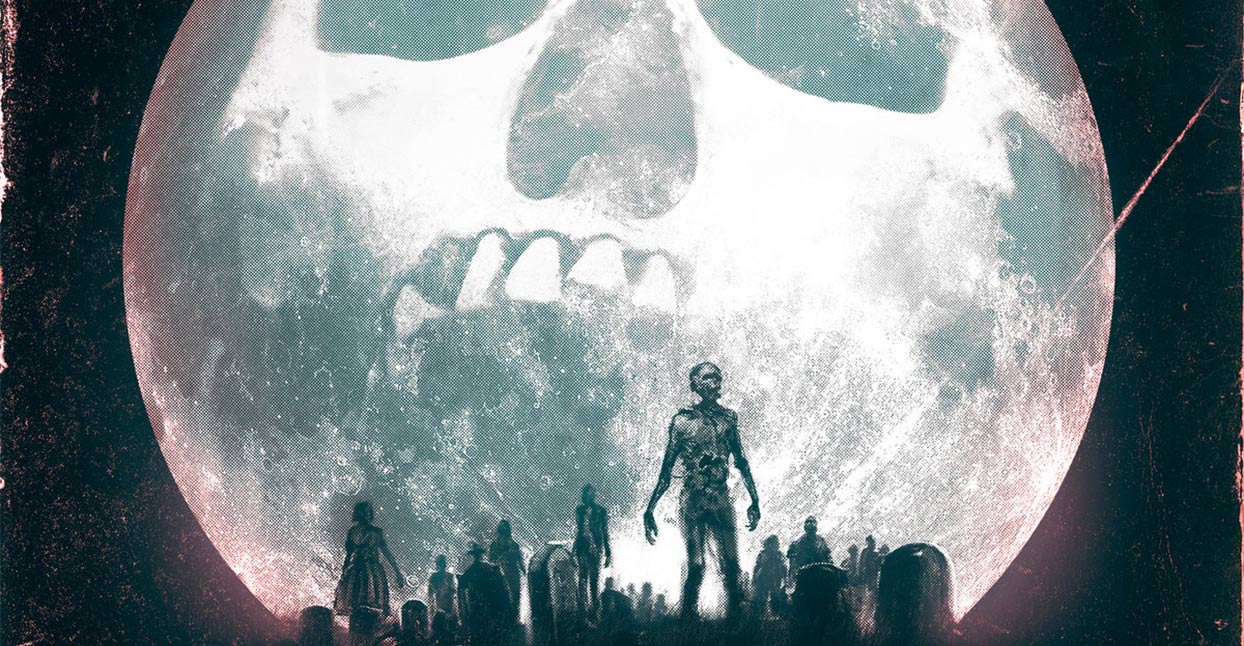 Even before they set out to create a new score for one of the most revered horror films of all time, Robin Ogden (who records as OGRE) and Dallas Campbell were already facing daunting hurdles. For one, Odgen lives in the southwest of England, and Campbell lives in West Virginia, meaning there are nearly 4,000 miles between them. And the music they make is highly collaborative, which means they’re dependent on Facebook Chat and Dropbox to get things done. Add to that the fact that they’re working from a strict source text, with specific musical cues, and it’s a wonder they didn’t abandon the project before they ever got started.

Not only did they complete it, but the duo’s re-score to Night of the Living Dead perfectly captures the film’s threatening mood while still working as a chillingly effective stand-alone album. We talked with the duo about how they created the score, and the synths they used in the process.

So, to get started: I was curious how old each of you were the first time you saw Night of the Living Dead.

Campbell: I was pretty young. I had elementary school teachers who were actually in the movie—two of my teachers were zombies in the movie. So, of course, in third grade, I had to see it. I was kind of traumatized when I first saw it—it’s a pretty intense film! Any time my friends were like, ‘We’re watching a horror movie,’ I would be traumatized for an evening. The scene in the basement, where the girl is hacking away at her mom—that’s intense! I can definitely remember for a few nights afterward, any time I’d have to go in the basement… I wouldn’t be too down with that.

Ogden: I can’t actually remember when I saw it. I may have seen Dawn of the Dead first. I think I was around 16. I think it’s actually had more of an effect on me now than it did back then. We were re-watching it before we did the project, and it’s pretty harrowing. It’s still horrendously relevant to now in so many ways.

Yeah, for all of its surface shocks, it’s also widely regarded to be a film with a really strong social subtext. I’ve read pieces that have said it’s everything from a comment on race relations in the ’60s to the U.S. involvement in the Vietnam War. What do you think makes the movie so enduring?

Campbell: I think it’s because it has those multiple layers. And the fact that it sort of almost looks and feels like a documentary.

Ogden: The fact that it’s in black and white, that it’s so stark—I think that makes some of the shortcomings with the special effects feel less obvious. They did a colorized version, and it didn’t have the same sort of impact.

How did you decide that this was a good source text to re-score? I know that you’ve also re-scored 2001. Was this project evolving at the same time?

Ogden: I think it was Dallas’s idea, off the back of the 2001 project. We started it a couple of months after we finished 2001 last year, but we didn’t have quite the right approach to it at first, so we took a couple of months off and came back to it. Like 2001, it was released without copyright due to a mistake by the distributor at the time. So it was an opportunity for us to re-score a film that we both felt pretty passionately about, and for people to be able to watch it with the score without any [legal] issues.

Campbell: I had done a quick check of which films were on the public domain list, and I was like, ’Oh, man, I totally forgot this movie was public domain. That’s so perfect for us.’

I like that for your first two attempts at re-scoring films, you went straight for genre classics: 2001 and Night of the Living Dead. You guys were not messing around.

Campbell: I mean, you’ve got to pick something that’s visually interesting, otherwise it’s not gonna be fun. Both of those movies are just great visually.

When you’re working with a “genre classic” like this, aere there rules or boundaries that you put in place for what you could and couldn’t do, musically?

Ogden: We have what we call a ’Dallas and Robin Manifesto,’ which is generally to make things as difficult for ourselves as possible. Dallas has this insane collection of vintage synths, and I’ve also got a few, so we tried to keep it all hardware-based. With Night of the Living Dead, most of the movie is shot very close up, so the main thing we were trying to do was create music that would work with that [approach].

Campbell: It made us keep everything more raw-sounding, to match the way the film feels—especially compared to 2001, where we’re using huge reverbs. This film is totally different, which threw us off initially. I started playing guitar at first, and I was like, ’This is not right.’ It took me a little while to figure out how to get that ’in your face’-ness that the film has.

Ogden: It’s a pretty claustrophobic film, compared to something like 2001. It’s not an ambient movie. It’s very intense. And there was definitely a trial-and-error period.

You also had the additional logistical hurdle of the fact that you are separated by about 4000 miles. How did you tackle this from a logistical standpoint, where you’re composing a score for a film, but you’re not even in the same time zone, let alone the same room.

Ogden: We had to chop it up into scenes and try to pick obvious places to cut the music. You just look for nice sync points [in the film] and beats to hit. The score is pretty responsive to what’s going on on screen—it’s all locked to picture.

Campbell: My favorite moment is probably the score for “The Basement”*

Ogden: There’s some really cool stuff on there that you did with tape delay. At the moment when the daughter has the trowel and she’s stabbing her mother with it, the tape-delay, feeding back in time with the screams, is pretty cool. It works really well, because you don’t know whether it’s diegetic or non-diegetic—it blurs that line. There’s another good bit in the “Dwellers” scene where the door bursts open at the same time that the Moog comes in.

So, speaking of working within formal limitations, I wanted to ask: If both of you had to limit yourselves to two pieces of gear each for the next record, what would you pick and why?

Ogden: I know what Dallas is going to say. For me, it would definitely be my Korg Mono/Poly, though it’s a bit under the weather at the moment. It’s a great synthesizer, and you can do so much with it just on its own. We do a lot with MIDI, because that makes life easy, but we do like the control voltage and analog triggering, and using that as a way to control synthesizers. But the Mono/Poly is such a cool-sounding synth. It’s got a weird filter, it does these awesome noise drums… So that would be my first choice. My second choice would probably be the [Korg] MS-20. It’s a semi-modular synthesizer, but it’s super flexible. It has 32 patch points, and you can just do so much stuff with it. The filter on it is kind of an acquired taste, because it’s pretty screamy.

Campbell: Probably the [Sequential Circuits] Pro-1, because it has a sequencer. It has loads of character—all that early Sequential Circuits stuff, like the Prophet 5, you can’t recreate it unless you have the hardware. My other choice would probably be my Yamaha SK-30. It’s an ensemble combo-organ type of thing. It has the old-school, gritty Yamaha filter. I used the SK-30 a lot on “End Credits,” and “The Basement” was written on the SK-30. You can write a whole album easy with this thing. If anyone ever sees one, they should get it—they’re pretty rare, and they’re awesome.

Ogden: The thing with all of these is that they have so much character, and they’re fun to use. It’s nice to be able to use your hands to actually make music. I do a lot of stuff [on the computer] with the mouse as well, but it just isn’t as fun a lot of the time. It’s inspiring to shape sound with your hands.

How did you start getting interested in synthesizers? What were your first experiences with it?

Campbell: I started buying synths because I was in a metal band. It was like Euro metal—this was in the late ’90s/early 2000s. So there wasn’t a lot on the internet yet. If you YouTubed a Moog Rogue synthesizer, there might be one video. I bought a [Roland] Alpha Juno and a bass station and a couple of other things. Around that same time, I heard that Boards of Canada record, Music Has the Right to Children, and I was like ‘Oh my God.’ I just loved that science-class, ’70s synthesizer sound. The past five or so years I’ve gotten pretty heavily into it. When my daughter was born I had a lot of free time, so I started reading more and more about it, and I started getting kind of addicted to it—because I didn’t want to go out and do anything else. The Pro-1 was the first synth I bought when I got back into it, and as soon as I started playing with it, I felt like I was Klaus Schulze almost immediately.

Ogden: I was in metal bands as well, and we had this problem where no one could play keyboards whilst playing drums or guitar or bass. This was probably in 2006. So I bought a Korg Electribe, which is like this little blue box, and you can sequence on it. I basically just got it to play the keyboard lines in our band. I got this, and I had no clue how to use it, so I had to learn. And then the band fell apart, and I was left with this Groovebox that I didn’t quite know how to use. I still have it, but I have to take it apart and fix it almost every year—repaint the keys, fix the wiring.

That’s the thing that’s always fascinated me, particularly about analog synths—there’s a real physical component to it. It becomes a hobby. You don’t just strap it on and play, you’re actually physically moving wires and cables and working the instrument with your hands.

Campbell: Definitely. Depending on what synthesizer I pick up to start something, that totally shapes what the piece of music is going to sound like. It just dictates what I do. Especially the modular synths—I have a Pittsburgh Modular Lifeform synth, and it’s just insane that you can get so deep into it.

Ogden: On the one hand, they’re instruments to express yourself. But they can also kind of write the songs themselves. And modular synths are a whole other ballgame.

Campbell: I’m trying to talk Robin into going full modular. He has amazing ideas with the MS-20, and it’s only semi-modular.

They have a monthly modular synth night in Brooklyn, where people can bring their synths and improvise together. Just watching people do that looks amazing to me. You get a much better sense of how the sounds are made. Even just the look of them—there’s this crazy sci-fi quality to it.

Campbell: I wish I could screenshot my table, which is set up with my modular and probably 10 or so other drum machines. It looks like it’s a control panel from Star Trek. And that’s what it’s like. You just zone out and try to contact aliens.