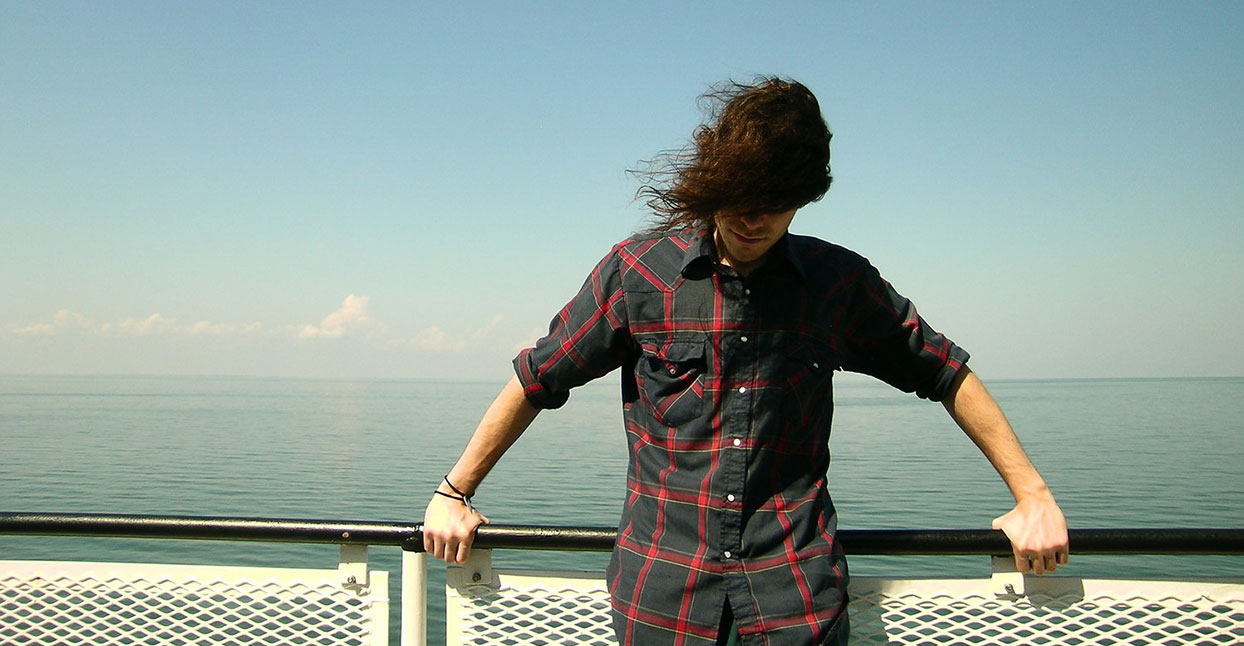 The number of rock records that covertly document intra-band squabbles and fights is lengthy. The most famous example, Fleetwood Mac’s Rumours, is essentially an acid-tongued diary of romantic turmoil within the group. Each of the four Beatles have penned songs that are not-so-subtle digs at their former bandmates, and The Libertines amassed a healthy catalog of songs that are essentially love letters and kiss-offs between frontmen Carl Barat and Pete Doherty. But rarely has there been a record as focused and barbed in its execution as the debut from No One Mind. Written by Ellis Anderson, Noah Dehmer and Missy Thangs in the wake of the acrimonious dissolution of their previous band, the album’s tense, feral songs capture the confusion, the hurt, and the anger that accompanies a breakup. The music is lean and sinewy, slashing guitars and rocketing drums giving the album potency and force. On the advent of the album’s premiere on Bandcamp Daily, we spoke with Anderson and Thangs about the record’s creation, and the circumstances in which is was born.

When you’re writing a record with this kind of subject matter, it can be really easy to be indulgent, or to give your emotions free reign—which doesn’t always result in the best art. Did you put any guidelines or boundaries in place when you were writing to prevent you from giving into those dark impulses?

Anderson: I don’t know that there were overt checks and balances. I think the three of us—Noah, Missy, and I— are very opinionated. We have pretty strong aesthetic leanings musically and stylistically, and from the relationship we’d already formed in [our previous band], I think we were already attuned to what each of us liked and disliked. That said, we did spend a good portion of time before recording the final tracks just going over what kind of mood we wanted to set. There was a series of 20 demos that I’d made that set some sort of mood, then I shared those with Noah and Missy, and the beginning process of making the record was trying to find what songs fit. So I don’t think there was an overt conversation as far as, ‘This is what it needs to be,’ but there was definitely a lot of pre-planning in regards to what we thought was cool and appropriate for the record.

Thangs: We knew we wanted to continue doing something [after the other band broke up]. We had this common passion, and we wanted to have a voice. Ellis gave the voice to my feelings, and Noah brought that element, too. The sound, the feeling, the psychology of one’s mind—so much of that was at play. And as much as things were thought out, there were many things in the studio that happened in the moment. We were having a great time coming up with sounds and bonding. I have so many great memories of that time, when we were coping with something bigger than the album. It was just regaining self-confidence, believing in ourselves, then coming into the studio, taking these demos and bringing them to life.

I would imagine making a record like this is cathartic.

Anderson: Definitely. The way things ended was extremely abrupt and caught us off guard. I think having an experience like this was necessary for us to move forward.

Thangs: At its core, we were all hurt. When somebody dumps you, your self confidence kind of burns. I can’t speak for everyone else, but I felt like I’d been dumped. I was putting my whole life into [our previous band], and I felt the magic in it. I felt the potential, and we were working so hard… and it just ended with an email. It was really painful. And as part of coping, you go through anger, sadness—there are so many layers. We had to build ourselves back up, on many levels, beyond just being musicians.

You mentioned earlier how the three of you have a shared aesthetic. I was wondering if there was one moment, or one song, that “unlocked” the way the record was supposed to sound for you.

Anderson: I think for me, the song that really set the mood was the first song on the record, “Folk Wagon.” The majority of the record is essentially using parts of the demo as guides for live performances. I remember tracking “Folk Wagon,” and there’s two distinct parts to it—there’s a break in the middle—and I’m pretty sure we only did one take of each section. Doing that really set the mood, it was a real “Fuck you” to the world. And that felt good. It felt very cathartic. It just made me feel good knowing that we could come back together and do something right off the bat and get the ball rolling. That, for me, was an important moment, just having something laid down.

Thangs: “Folk Wagon” was definitely one of the songs we would turn up at the end of the night, as loud as we could, and just dance. It wasn’t ego celebrating, it was something so much bigger than that—it was friends, it was family. Those are the moments I really remember.

Usually when you make a record like this, about a very specific subject, there’s a temptation for writers to go rooting through the lyrics in search of little clues as to what each song might be about. But one of the songs that stuck out to me doesn’t have any words at all—it’s “Revenge.” You guys took this very potent, very loaded word, and you paired it with this kind of curdled, free-form instrumental music. Even without saying a word, that song speaks volumes to me.

Anderson: All three of us are huge Bowie fans and, I don’t know if it was a conscious thing, but we were definitely open to experimentation and improvisation. That’s how the track started—Noah was fooling around with a guitar in the tracking room, and I was fooling around with a synth in the mixing room. We had some interesting sounds going, we started responding to each other, Missy hit record, and we started developing some improv soundscapes. We didn’t know exactly what to do with them at the time. We knew that we liked the basic tracking, but later on, when we actually got our friend to record saxophone for “Folk Wagon,” we thought it would be fun to fill up the improv piece with sax. The final song is a combination of three different takes.

We’ve talked a lot about the past, and the circumstances leading up to this record, so I thought we’d end on a positive note and talk about the present. What makes you happiest about where you are right now?

Anderson: I just wasn’t ready to stop playing with these people. I had developed a rapport with them, and a really unique relationship with them, and I thought that it was worth salvaging that, and trying to find the best way to do that. After the record was created, Missy and I were trying to figure out what to do with the record. Which got us in touch with Billy at Third Uncle, who loved the record and wanted to put it out, and the  big question after we decided we were gonna make a run of it was, ‘Do we want to turn this into a live, touring band,’ and the answer was ‘Of course.’ It’s what I want, and it’s what I hope the rest of the band wants. I just hope everyone is having fun with it. It’s my dream to keep playing with these people for as long as I possibly can.