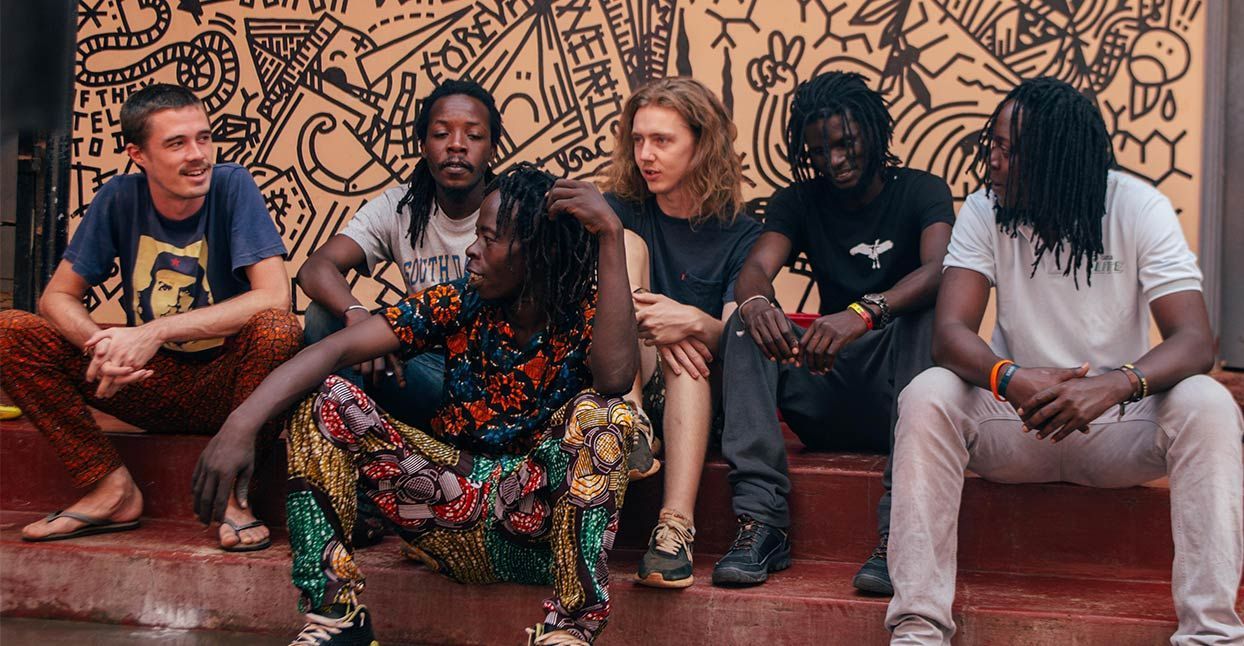 Press play on any given Nihiloxica (pronounced nii-lox-ee-ca) track and you’ll discover a sound that bridges contemporary electronic music and centuries-old folk drumming to adrenaline-pumping effect. The Uganda-based group—there are six members, four of whom are percussionists—is the result of an ambitious experiment that took the group several continents after releasing their first EP. And the way they tell it, they are just getting started.

The foundations of Kampala’s (the capital of Uganda) growing electronic community were first laid several years ago. The Nilotika Cultural Ensemble, a local percussion troupe that teaches spiritual, musical, and tailoring practices to underprivileged communities around the area, had begun jamming along to local DJ sets in clubs. The collaboration intrigued clubgoers, and the ensemble saw the potential for a more concrete, long-term partnership between the two.

“We really threw ourselves in at the deep end when we started the band—working basically full-time hours for a month straight, jamming on ideas that me and Spooky had conceived in Leeds, adapting them as necessary, and learning new rhythms with the guys,” Jones says. “We had three weeks to write and rehearse material, and then one to record it. I think the focus and determination of that month really show in the final product, and yes, from the beginning, it did seem like we were on to something unique.”

Following the success of their 2017 self-titled EP, Nihiloxica began a year-long international tour, bringing traditional Ugandan drumming to prestigious clubs and festivals around the world (among them, Yaam Berlin and Red Bull Music Festival Paris), and tightening their sound in the process. It was during this time that the group started brainstorming ideas that would eventually become their second release, Biiri. On their self-titled EP, the group focused primarily on the Kadodi rhythm; on Biiri they exploring other traditional Bugandan rhythms, particularly the Baksimba.

“There are lots of stories behind some of these rhythms. The Baksimba rhythm was created for the King of Buganda, with the intention of making him happy,” explains bass drum player Isabirye Henry. “To do this they created a dance about the banana plantation which makes a local drink known as ‘Owenge.’ I think once the king drank this, it probably made him pretty happy.”

“The Baksimba groove is one that stood out to me and Jacob as a really interesting one from the get-go,” Jones says. “It has a very driving polyrhythmic feel, consisting of a pulse of two and three operating at the same time—something fundamental to most Ugandan rhythms, but particularly apparent here. We struggled to find the right synth sounds for a long time, and ended up going for something droney and blocky that would let that awesome groove do most of the talking.”

Make no mistake, though: Nihilixoica’s distorted, droney synths aren’t typical of most Ugandan music. Where most Ugandan dance songs are upbeat and make use of major chords and simple patterns, Nihiloxica have extracted the underlying rhythmic intensity and fused it with their own droning synth leads, positioning themselves musically even further left of their peers.

“What we’ve taken from Ugandan music is the rhythm and the intensity, and imbued it with our own darkness,” says Jones. “For me, a lot of my influence is actually from heavy metal—you can probably hear that best on ‘Ding Ding.’ It’s basically a tune where I’m using each of my synths to emulate screeching guitars. My sense of rhythm also comes a lot from progressive metal; bands like Tool and Meshuggah had me into polyrhythms a long long time ago.”

Jones and Maskell-Key also found inspiration in U.K. techno artists like Randomer and Ansome, as well as more polyrhythmic electronic acts such as Sleeparchive and Lumisokea, that helped pave the way for the harsher synths that the group uses.

“This project definitely took a lot of influence from what I was listening to at the time, like Perth Drug Legend, Shackleton, Joe, etc.,” says Maskell-Key. “In terms of live stuff, Samuel Rohrer‘s album Range of Regularity made a big impact… the way he combined synths and percussion felt so organic and inspired me to pursue this kind of sound.”

Despite their innovative take on both Ugandan music and techno in general, Nihloxica’s formation and rise to success may not have been possible without the blossoming Kampala underground scene. According to Jones, the area has always been full of life, with locals regularly boogieing to dancehall until sunrise. But with the rise of Boutiq Foundation, a Uganda-based arts incubator, and MTN Nyege Nyege, as well as its label Nyege Nyege Tapes—which has given a voice to number of locals groups and artists like Bamba Pana, Duke, and Ekuka Moriss Sirikiti—more and more experimental music parties have been turning up all over the region.

“Some DJs who are really killing it are Catu Diosis—she gets better every time I see her. I also love Authentically Plastic,” says Jones. “Our good friends Ba Cypher Kabaka are a rippin’ old-school hip-hop crew who have some of the highest energy live rap performances I’ve ever seen.”

“There’s also our housemate Don Zilla, who just released on Hakuna Kulala recently, and our friend Brian Bamanya, whose built his own modular synth,” adds Maskell-Key. “He did a heavy techno set on it at our last Boutiq party in Kampala and tore the place apart.”

Thanks to the efforts of collectives and labels like Nyege Nyege Tapes and Boutiq, a new community of artists have the ability to grow, and to continue to foster this blossoming new scene. Biiri is a product of not only these collaborations, but also a product of hundreds of years of tradition. Under the noisy, U.K. techno-inspired synths and thumping drums is a deep foundation built on cultural pride and community. It’s what separates Nihiloxica from every other electronic group, and part of what’s shaping the new sounds of Uganda.