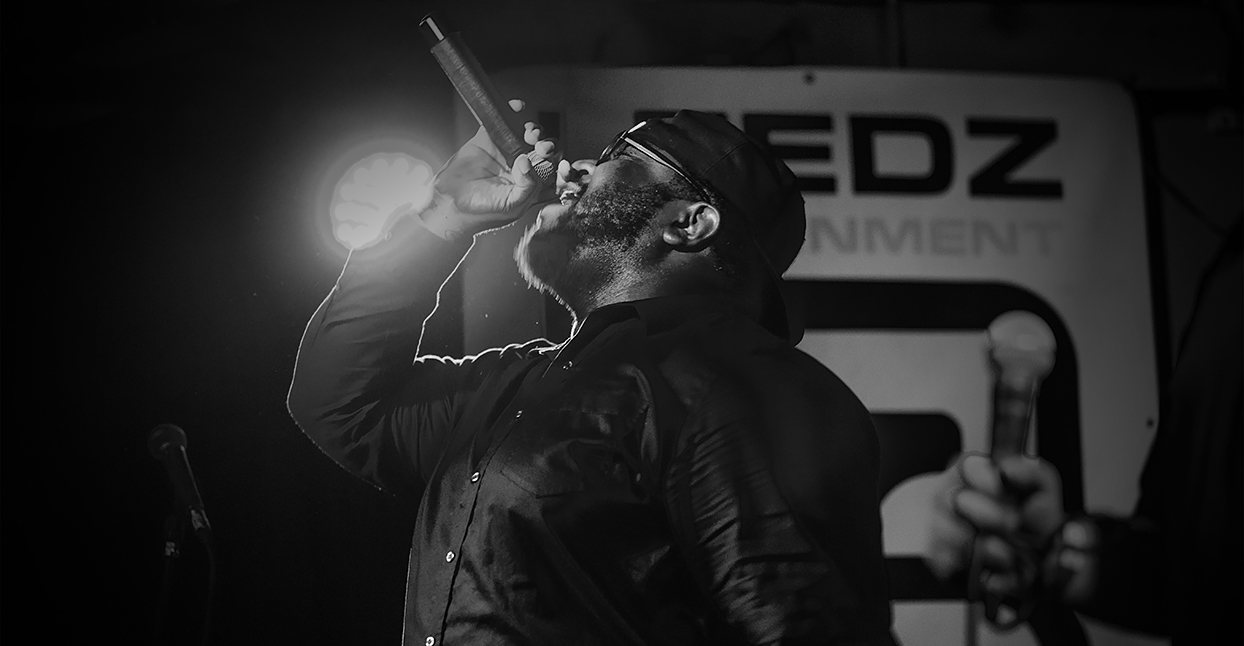 One of the strangest beefs of 2016 began with Alex Trebek. In October, Jeopardy! contestant Susan Cole introduced herself on camera as a fan of nerdcore hip-hop. “It’s people who identify as nerdy, rapping about the things they love: video games, science fiction, having a hard time meet romantic partners,” she explained, to which Trebek replied, “Losers, in other words.” Raheem Jarbo, better known as nerdcore hip-hop artist Mega Ran, was traveling on tour from Birmingham, Alabama, when he heard what happened.

“I got absolutely blown up and inundated with links to that event, nonstop,” he says. Jarbo wasn’t mad, per se; Trebek said he was teasing. Jarbo still found the situation ironic. “Talking sideways on geeks, man, you a trip / Guess you hadn’t heard, nerds make up half your viewership,” he rapped in a 40-second freestyle posted to Twitter. The next morning, the clip was featured on TMZ on TV.

Then came “Who Is Alex Trebek,” a massive posse cut on which 13 rappers—including Jarbo, Sammus, and MC Hawking, among many others—spit acerbic bars over the game show’s popular thinking music. It’s the ultimate diss track, even if it ends on a self-deprecating note. “But losers, my dudes, maybe he wasn’t wrong,” Dr. Awkward says, “’Cause we did spend all day making this song.” Nonetheless, “Who Is Alex Trebek” is possibly the biggest nerdcore hip-hop cut to ever exist. Such a track wouldn’t have been possible 20 years ago.

MC Frontalot coined the term “nerdcore” in 2000 while making music on his computer—which, back then, was considered a dorky way to create. He released a song called “Nerdcore Hip-Hop,” which fueled the subgenre’s main theme of rappers trying to out-geek one another. “Step to my DJ, you better step prepared / He got (28 + 22/50)2”),” goes a sample lyric. (If you hadn’t done the math yet, the answer is roughly 808—as in, the drum machine.) Frontalot says he wanted to poke fun at music critics who coin uber-specific names for musical subgenres. “As soon as I recorded that song, I realized why every band wants to have their own genre all to themselves,” he said on rapper Open Mike Eagle‘s Secret Skin podcast. “It tricks journalists into thinking you’re some kind of visionary.”

Still, Frontalot became the public face of a phenomenon, in which a growing number of rappers spoke about their love of Star Wars, World of Warcraft, Dungeons and Dragons, and computer science. The 2008 documentary, Nerdcore Rising, followed Frontalot on his first national tour. Seattle became the subgenre’s unofficial home, thanks to the concerts hosted by the gaming convention Penny Arcade Expo (now PAX). Many of these rappers, like Frontalot, were white men who said they didn’t identify with the harder subject matter and posturing of mainstream hip-hop.

Like many rappers who get labeled as nerdcore, Jarbo had never actually heard of the genre before he entered the fray. By 2007, he’d been rapping for a decade prior under the name Random, but had become largely disillusioned by rap music. Then, he released Mega Ran, an album where he raps over instrumentals from the retro Capcom video game Mega Man, from the perspective of the titular character. In response, Capcom granted Jarbo a free license to sample from any of its game titles. “Then people would tell me, ‘Hey, that’s nerdcore.’ And I’m like, ‘what’s that?’” he recalls.

Long after the initial wave of press, the definition of “nerdcore” has expanded. To start, some of the artists who were featured in documentaries like Nerdcore Rising have made a go at rapping full time. mc chris’s most recent album, mc chris is dreaming, features a skit where Nightmare on Elm Street‘s Freddy Krueger is brought into the real world, and becomes enamored with little conveniences like credit card points. Moments like these, says mc chris, are why he’s able to embark on his current, 55-date 10 Years of Touring tour, featuring Mega Ran and fellow veteran MC Lars as opening acts. (Meanwhile, mc chris is dreaming debuted at No. 2 on Billboard‘s Comedy Albums chart.)

The nerdcore hip-hop community is also having mindful conversations about representation—or the lack thereof. Back in 2007, when even The New York Times caught on to nerdcore, the only nerdcore rapper of color was the half-black MC Hawking (an homage to Stephen Hawking). Last year, the gamers convention PAX West hosted a panel titled “Nerdcore Music: Evolving with Geek Culture.” Its lineup—two white male rappers, two black male producer/MCs, and one Asian-American female rapper—was far more diverse than nerdcore had been just 10 years ago.

Jarbo epitomizes the demographic shift in nerdcore. On his latest album, 2015’s RNDM, he opens up about the man behind the Mega Ran curtain: a former teacher-turned-working musician, a skilled rapper whose career took off once he got geeky. In 2014, he founded the Nerdy People of Color Collective, which features nerdcore rappers Shubzilla and Sammus, and WWE superstar Xavier Woods, who happens to love video games. It’s a show of solidarity for fans who approached Jarbo after shows to thank him for who they thought to be a rare nerd of color.

“I used to think about it like, ‘Oh, I can only play this song for this group of people, and I can’t play this song at this show,’” Jarbo says. “I have one [with K-Murdock] called ‘Dream Master,’ talking about me growing up and being teased and all the things we go through as kids. I always said, ‘I could never play this at a hip-hop venue.’ Then, one day I was doing a show at a crowded hip-hop venue, and a man in the front was like, ‘Play that ‘Dream Master’ song. Play the Mega Ran stuff. I’m just like, ‘Yo, OK. I can be myself here.’”

Neither mc chris nor Mega Ran are under the impression that nerdcore will go mainstream any time soon. They have been heartened by the spike in turnout for the 10 Years of Touring tour—arguably because of Trebek. “Because we made the news cycle, we’ve had more sell-out shows that I remember us having, which is amazing,” mc chris says.

“It’s nice to have a lot of people either discovering us and seeing a lot of Xs on hands, which means it’s a lot of younger people, and college age people,” mc chris concludes. “But I’m also seeing a lot people coming up and saying, ‘I’ve been listening to you since I was 12’—and they’re grown men. They will say, ‘I’ve been wanting to see you perform for 10 years and now I’m getting to tonight for the first time. I’ve wanted this for a really long time.’”