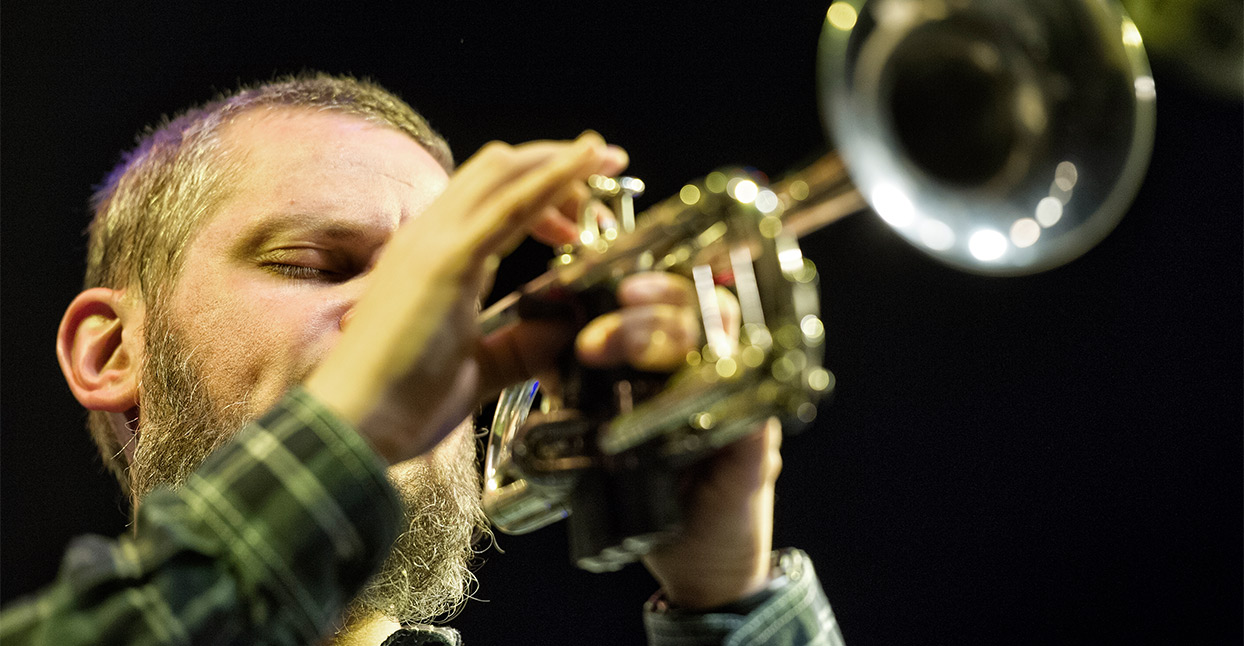 Trumpeter Nate Wooley admits there are moments when his far-flung musical activities make him feel a bit scattered. While he’s at the center of an expanding circle of daring musicians, including saxophonist Steve Lehman and percussionist Tyshawn Sorey, who thrive upon moving freely and rigorously through disparate traditions, Wooley’s voracious appetite for exploration stands apart. Although he grew up playing straight-ahead jazz in Portland, Oregon, since moving to New York in 2001, he’s fearlessly opened up his practice to include contemporary classical, experimental, and underground rock.

“Earlier this year I did a tour with Mats Gustafsson’s Fire Orchestra, came back for two days, and then played Eliane Radigue, and that was really tough,” Wooley says of the Swedish free jazz ensemble and austere French composer. “To go from smoke machines, multi-colored lights, and a screaming big band, to being a guy in a room playing as soft as possible in two days was tricky.” Those aren’t the only stylistic poles reflected in Wooley’s work these days; by remaining true to his aesthetic, leapfrogging between various contexts, Wooley has emerged as one of America’s most exciting and inveterate sonic explorers.

He wouldn’t have it any other way. “In some way I get this fantasy, in my darkest periods, where I’m like, ‘Well, maybe it would be easier if I just made these kinds of records and people would be able to attach a sound to my name and maybe I could play some more gigs or get a little more notoriety,” he says. “But then I can step back and go, ‘Yeah, you’d be miserable. So now you get to play 150 days a year but it’s 150 days of that one thing. And I’m not built to do that. And luckily, by sticking to my guns, I feel like my brand or the way people view me is through the lens of, ‘He does different stuff all the time.’”

The latest work of his long-running project Seven Storey Mountain V (released on his own Pleasure of the Text label) is an expansive iteration of a concert-length work built around an abstract prerecorded tape piece. It gets overhauled for each new performance, with Wooley stripping away certain elements and adding new ones every time. As he recently told Philip Clark of the Wire, he doesn’t think any part of the original tape piece has survived the various revamps. With each performance, Wooley has pulled in larger and larger groups of musicians to interpret the work, which relies on extensive improvisation. The latest version includes a full-fledged brass ensemble, the TILT Brass Octet, along with a typically diverse case of improvisers such as saxophonist Colin Stetson, violinists C. Spencer Yeh and Samara Lubelski, and vibists Matt Moran and Chris Dingman. The music ebbs-and-flows beautifully, shifting density and volume, and gliding between shimmering serenity and howling abrasiveness in thrilling ways. Wooley’s hand as a composer is largely invisible; he creates a format that instead allows his collaborators to shape the piece in real time.

Another recent concert-length work released by Firehouse 12, Argonautica, was inspired by and written for Wooley’s first important jazz trumpet mentor Ron Miles—known for the bell-toned clarity and lyric beauty he brings to his work with guitarist Bill Frisell, among others—who’s part of the double trio that performs that dynamically wending piece. Part of Wooley’s genius is his ability to bring musicians together from diverse backgrounds, which allows the music to develop in unexpected ways. Pianist Cory Smythe is both a masterful improviser and a musician steeped in contemporary classic and standard repertoire (he won a Grammy for his duet work with violin virtuoso Hillary Hahn), while the Belgian keyboardist Josef Dumoulin has forged a new vocabulary for the Fender-Rhodes; they’re as different from each other as the brusque Wooley and the polished Miles or the swinging Rudy Royston and the disruptive Devin Gray, both on drums. Wooley’s malleable writing means every performance is different, and his versatile cast of players push hard toward the margins.

As a guy who grew up with jazz, Wooley, 43, has a different relationship with other styles than many listeners. “I didn’t hear Led Zeppelin until I was in my late 20s. I didn’t hear Pink Floyd until I was almost 40. All these other worlds of classical music, folk music, rock, and punk, I was able to kind of grasp on to them in a different way. I don’t have any nostalgia for them. And so I think when you don’t have any nostalgia for them you can fold them into your musical language a lot easier. The thing I have nostalgia for, then, is jazz, which I keep coming back to, but in a loving way and through the lens of all these things that I’m maybe more interested in exploring now like contemporary classical music and experimental music and rock music.”

In addition to creating work that reaches far outside the traditional lines of jazz, classical, and rock music, Wooley spends most of his days working as an advocate for various stripes of outsider music. He oversees the Database of Recorded American Music—a mind-boggling streaming-service specializing in 20th century contemporary classical music from America, and he also edits its incredible online journal Sound American, a genre-allergic exploration of the kind of radical US music-makers Wooley affectionately dubs “the American Weirdo”—from Charles Ives to John Cage to Christian Wolff to Anthony Braxton, with countless stops in between. Sixteen issues have been published since it began in 2012, with the focus on subjects like Cage, trumpeter Don Cherry, and the Deep Listening ethos of Pauline Oliveros. While it tackles some pretty heady music—the current issue is devoted to Braxton’s fascinating sound world,, and part of the issue included a downloadable album of musicians performing elements of the composer’s singular language—Wooley is adamant about making sure it’s useful to a wide audience.

“The big mission and mantra that I had been giving everybody was ‘Write what you know, but write it for people that may or may not know anything about Braxton so that everybody can use these articles,’” he says. “It’s not just for the superfans, and it’s not for the people that have a passing interest, it’s for everyone.”  In January the bulk of the first three issues of the journal will be published as a mass-market paperback—with some new articles—with subsequent volumes published in three-issue collections to follow (everything published online will remain archived there). By year’s end the Sound American label will debut with a portrait album of the daring Wet Ink composer Alex Mincek, followed next year by the trio of trumpeter Miles, guitarist Mary Halvorson, and Deerhoof drummer Greg Saunier interpreting selections from the Great American Songbook.

“Now that I’ve done Sound American for a while, I take pride in doing it,” he says. “We all have the opportunity to start conversations, so we all have the opportunity to put information out there and create a world in which culture and art is celebrated and debated. But it just takes a tiny bit of work—well, not a tiny bit of work, a lot of work—but anyone can do it.”