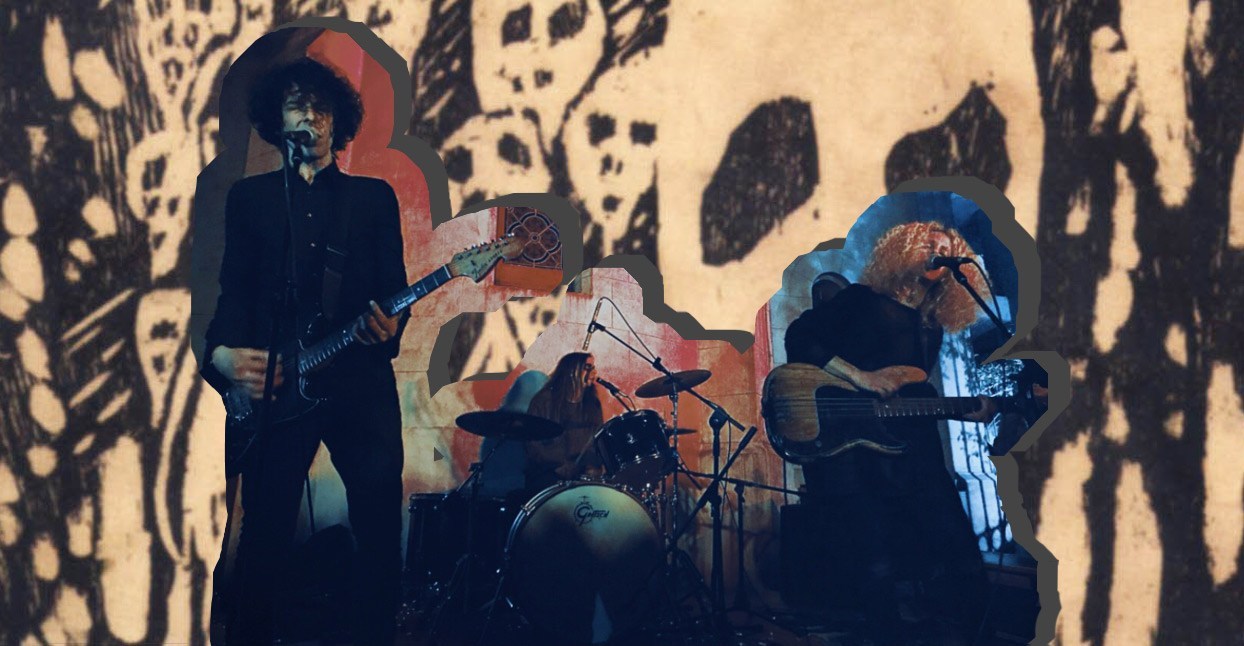 With a career spanning more than 20 years with the same lineup—Daniela Zahra on bass and vocals, her partner Marcelo Moreyra on guitar and vocals, and Federico Losa on drums—Mujercitas Terror are a goth-looking punk trio with lyrics that pay homage to the best of porteño lyricism, perhaps drawing inspiration from the more than 200 hundred love letters that Zahra and Moreyra have written to each other throughout their two decades together. Zahra remembers the band’s foundational act: “We wrote the name in black on the white walls of our rehearsal space, and we’ve been Mujercitas Terror ever since.”

When they began the project, Mujercitas Terror saw different reactions from neighbors: “In my neighborhood, everyone listens to Creedence, it’s like the Twilight Zone; that said, no one has ever looked at us in a judgy way. Maybe out of curiosity—some people would approach us when we went to buy cigarettes on the side of the road, wanting to know what we did—but no one gave us weird looks. We put together a rehearsal space in our house, we spray-canned ‘Mujercitas Terror’ on the wall, and sometimes the neighbors would throw stones at the metal sheet roofing but they wouldn’t say anything to us,” Zahra says. “Sometimes, Marcelo’s mother would come in and everyone knew she was to be ignored. We played until we were starving. Marcelo’s sisters would always want to come in and watch. It used to be terrible back then, the rule was that nobody was allowed in during rehearsal. His sisters would look in from the other side of the glass window, and I would slowly lower the blinds.”

You could say Mujercitas Terror have a love/hate relationship with the city of Buenos Aires. On one hand, Moreyra’s lyrics, with all their passion and romanticism, continue the porteño lyrical tradition; porteño is a term for Buenos Aires locals, and in particular the way post-colonial European immigration in the late 1800s affected the culture of the city (and other port cities in Argentina). On the other, the songs also include imagery like that of “Servicio maldito”: “Debes irte / A tu casa donde serás rey / Y es casi imposible huir del monstruo creado” (“You must go / To your house, where you’ll be king / And where it’s impossible to run away from the monster you created”). Song titles include “Dejemos este pueblo” (“Let’s leave this town”) and “Aldeanos malditos” (“Damn villagers”).

Moreyra, who’s responsible for the band’s lyrics, says: “‘Aldeanos malditos’ is not against Buenos Aires, but saying who it’s against would be even worse. It’s a natural expression when you want to leave for somewhere else but then, with time, you realize there’s nowhere to go and the only option is to leave your body. When I was younger, I’d always say, ‘I’m leaving home,’ and then I’d come back; but the idea of being able to leave allowed me to survive. I always felt resentful about being born in a specific place, being a local—now every place seems horrible to me. Nowadays, I enjoy going to my mom’s house, which is kind of an odd place.”

Mujercitas Terror have lived through several waves of changes in the city’s live music policies. According to Zahra: “Again, we had the luck of living in a super crazy time, in which we played in houses. If they kicked us out, we’d go somewhere else. ‘Dejemos este pueblo’ is not about leaving the country, it’s about that particular situation. But they won. It’s like they make music for that carrot dangling on the stick, but there was something else, something more clandestine, more fun, stuff that’s hard to forget. The more powerful people took advantage of that situation.”

Moreyra adds: “I like playing every weekend. For me, playing every three weeks is horrible, it makes me feel like crap. It’s like, everyone comes out of their coffin once a month and then they continue with their bougie lifestyle. They eat well, sleep well, and they consume the right kind of drugs. Niceto and Vorterix [local clubs] don’t sound too good either. Yeah, you play in a really nice place but you make 10 cents, most of the money goes to [the venue].”

There’s something in Mujercitas Terror that resonates with the mixed emotions of adolescence—something that hasn’t changed all the time they’ve been together, though they’ve obviously grown and changed as people. What they do still speaks to rebellion, change, liminality. “That’s weird about people, they identify with something during their teenage years and then they grow up,” Zahra says. “That’s not the case for me, I don’t get it… we still live in that limbo.”