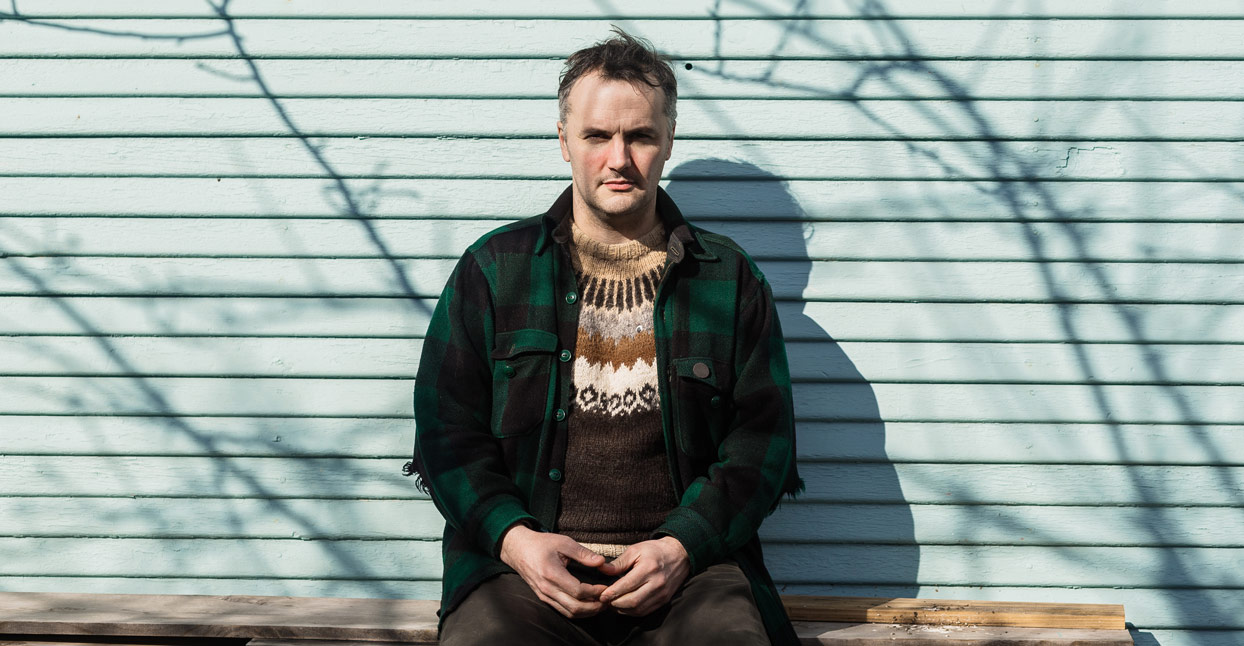 Not long ago, Phil Elverum’s primary focus was on crafting the deeply atmospheric, expansive music that marked the records he released under the moniker Mount Eerie. He and his wife Geneviève, a visual artist and musician, lived blissfully intertwined creative and domestic existences, recently welcoming a daughter. Then, Geneviève was diagnosed with cancer. Her treatment and subsequent death in July 2016 changed Elverum profoundly, which naturally changed the music he makes.

Elverum himself was surprised that he was able to write and record the new Mount Eerie album, A Crow Looked At Me. Gone are the atmosphere and noise. Instead, narrative lyrics about the painful details of Elverum’s loss are front and center. Elverum recorded the album using Geneviève’s instruments in her music room, down to using her guitar picks and writing the lyrics on paper he found there. The production is kept sparse, laying all the details of grief painfully bare.

Normally, I start interviews by congratulating artists on their new albums, but I’m not sure that’s appropriate this time. It’s a great album, but the circumstances are so sad.

It’s confusing to know how to be about it. I feel the same way. I feel proud of it, but then I feel bad for feeling proud of it. It’s just complicated. I’ve never made anything like this before, and I’ve never tried. I’ve always been working in a different direction. This time I was doing a whole other thing.

Why did you choose that Joanne Kyger poem [“Night Palace”] that’s on the cover?

Well, that piece of paper—it’s a little tiny postcard-sized broadside letterpress thing—was pinned to the wall of Geneviève’s studio. It was pinned above her working desk for the last many years. She had a lot of things pinned up. I never really focused on it until after I had recorded the album, actually. I was cleaning out her studio and read it and realized it was exactly what my album was about. It needed to be the umbrella under which my album sat. And also, the fact that it was pinned above her desk all those years, it was a major part of her life and thinking. The picture on the cover is me cleaning out her studio. I actually kind of staged it. Nobody’s noticed it yet, but there’s a copy of Tintin in Tibet, recognizable just because of the colors. Any comic nerd is going to pick out, ‘Oh, yeah, that’s Tintin in Tibet.’ It’s her stuff. All her special things that were in her room—I took the picture there. The room where I recorded it was across the hall. It’s a different, spare room where she also died.

Did you feel her when you were there writing, recording and working on the record?

I did. I felt her presence in the room. I just always do—in the house, everywhere. We were very intertwined in our lives. We were just together all the time. I’m always feeling her, but not in the way that she was participating in the music through me. More like she was off to the side. I’d look over and be like, ‘Oh, hi, what’s up?’

One thing I found very interesting was the crow symbolism. When my own father died, I was suddenly surrounded by crow imagery, so that immediately stood out to me when I saw it in your album. Have crows been a symbol for you before?

Not before, and even now it’s not that huge of a symbol.  There’s this one walk I took in the woods with our daughter and there was this crow following us around and looking at us. So it’s just this one crow. Then I guess there’s ravens on another song on the album. They’re not a running theme, but I wonder if there is some universal symbolic power that crows traditionally have.

I saw that you’d been reading a lot of Karl Ove Knausgård. Did that influence you during the writing of this album?

Definitely in the tone or the general approach of telling the banal details and hoping they add up to a deeper statement. That comes from Knausgård. I’d been writing a lot, just for my own self, to clear out my head. I was inspired by reading [Knausgård’s] My Struggle, but also just sitting down at the end of a very stressful day of parenting and hospital visits and mortality fear and being exhausted but needing to clear my mind. I would just start typing. It was very therapeutic. He’s definitely the main literary influence. There’s a poster that comes with the album where I go into greater detail about some literary references, but Gary Snyder is always an influence, and there are some references to him on the album. And also Joanne Kyger, of course. Her work is pretty—I don’t know what the word is, but not ‘poetic.’ Just saying the thing that happened, kind of domestic and direct, which I was shooting for with this album.

How many of these songs were written in the middle of hospitals and in the days immediately surrounding Geneviève’s death, and how many needed time and space to be written?

They were all written in a six-week period in September and October a couple months after she died. But some of them, like where I talk about ‘You’ve been dead for 11 days,’ I wrote a lot of scrappy notes in my notebook that got shaped into the final song that happened in September and October. I have been writing in my notebook all along, but nothing got made into a song until afterwards.

It’s that same song that has a line I really love. ‘You did most of my remembering for me.’ Can you tell me about that line?

She had a really good memory. I don’t. It’s just all a blur. I think that’s common with couples who are pretty close, who live closely and work closely together every day. My grandparents were a good example of that. My grandpa would just be, ‘What’s the name of the guy who—’ and my grandma would just know immediately who he’s talking about. I’ve noticed that the person that’s part of that equation that stops having to remember that stuff, their brain just stops even trying because they know their partner is going to be there to fill in the gaps. That was us. Now there’s all these parts of my life that are gone because she remembered them. Like names of people, when it was that we went to that place, name of the person we stayed with. The catalog of what I’ve done with my life was stored in her.

How did going through the grieving process change your aesthetic? Could you no longer stomach things you liked before, or did you find you just had to do things a certain way?

Yes, for sure. I’m a different person, because not only this death and grief and all that, but I’m a single parent, and so that changes people as well. I don’t watch movies or TV anymore. I just can’t pay attention. There’s too much to do, too many tasks to do. When I do see stuff, if there’s violence, I’m way thinner-skinned than I used to be. I got re-sensitized. It’s a complicated and deep thing. Yes, the world we’re living in right now is gnarly. There’s a lot to pay attention to and engage with politically, socially, physically. I am not that engaged with it, even though I’m paying attention to it. I’m surrounded by people who, that’s what they’re doing, completely. I want to, but I also can’t, really. I feel conflicted about it. I want to be on the Internet tweeting these news articles that I read, but I also don’t want to fill my days and my life with that because there’s been a shift in my priorities. It feels weird to say, because the things that are happening now are very real and dire, but still I feel like my priority is so deeply on protecting this small little family bubble I have right now. Making it be peaceful and healthy.

What about how it changed the things you make? After I lost my dad, I thought I’d be making some grand art project. But all I wanted to do was paint a piece of watercolor red, then paint one blue, and so on. I had a huge stack of monochromes. Did you find yourself taking on unlikely creative projects, aside from the album?

I actually am surprised that I even made this album or these songs. I didn’t have any creative urge, really. In my past life—and Geneviève felt this way too when she was sick—we were both so focused on our work, on drawing and music and touring, all day, every day. We didn’t have other jobs, so we just lived in this house that was completely geared toward our projects. And then she got sick and we had this baby, and that stuff seemed way less important, and a little bit selfish. The obsession with making stuff and exploring creative life was gone. But then this album happened. It plopped out of me. Is that a good thing to say in a PR campaign, ‘This album plopped out of me?’

I read that the Palace album Arise Therefore was the inspiration for your album’s production style. How did you come to listen to it and decide that that album would be the template?

I love Will Oldham. I have all his albums, and I listen to them all the time. I’ve had that one for decades, or however long it’s been out. I’ve always loved that one. I wanted to make music that was pretty and gentle and round, not confrontationally challenging. Arise Therefore has some weird chords and weird singing on it, but it’s still soft, so that balance of deep and challenging, but always pretty. Maybe I remembered, too, there’s a book with a long interview with him and Alan Licht, and he goes into depth about the production on all the records, and I remembered reading about that one and picturing how it went down. It just seemed so nice. He made that record by getting a group of people together and capturing these performances live. That was my intention with this. I was going to write a bunch of songs and then get a band together and do it live in the studio, but I realized it was too personal to have anyone else’s energy on it. It had to just be me.

Do you know what your musical direction is now, or are you even thinking about the future of your music?

I do think I’ll make more music. I want to. I don’t want to do the same thing again, although I feel like I discovered a new way of doing things for me, like a new way of writing, a new tone, a new way of producing.

In terms of more narrative lyrics and more spare production?

Yes, and that’s what I’m more drawn to listening to right now. Something that engages the mind, something that’s not about atmosphere. I feel like the records I used to make were more about atmosphere and the world that it creates, and production, and spending a lot of time in the studio. I’m not so inspired to do that now. I want to engage the brain.