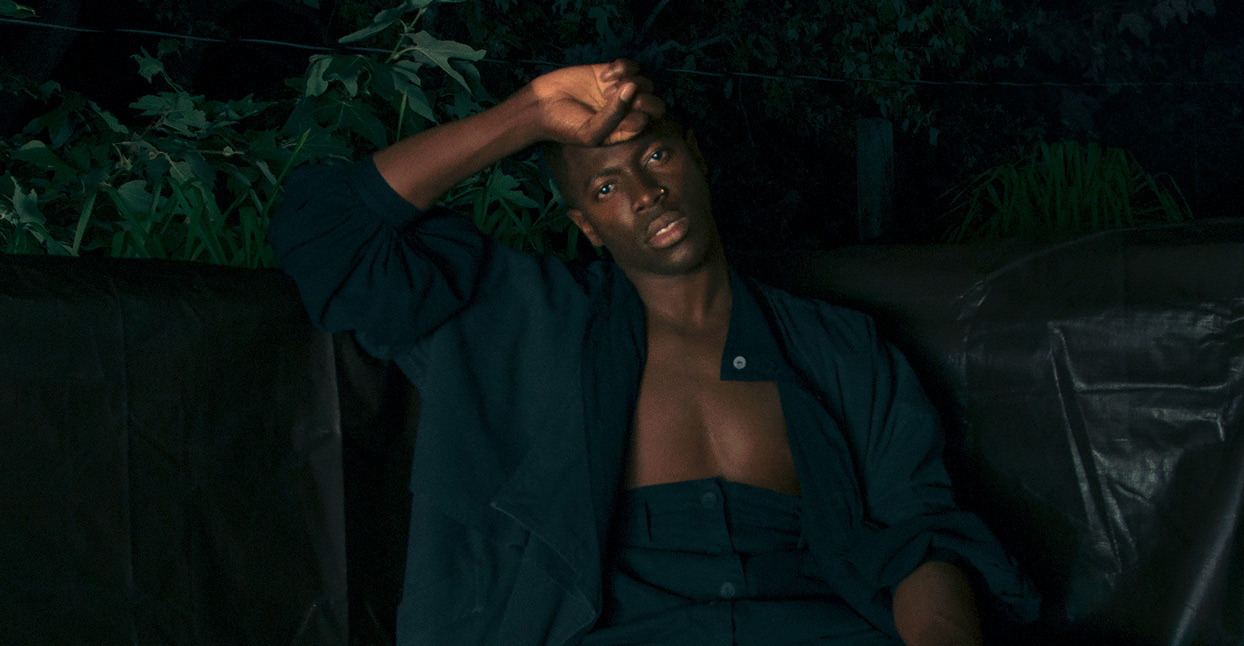 Moses Sumney wants to be real. His search for truth is a hallmark of his music, and he’s spent plenty of time exploring the shadows of his mind, getting comfortable with his own darkness.

“All the things you’re not really supposed to think about, like, ‘Oh, I’m going to die alone’—I think about that all the time,” Sumney says softly, strumming his guitar as we speak over Skype. “I’m just the kind of person that will go there. I’m obsessed with personal honesty.”

Sumney recently spent some time living in an apartment in London. It was either there or Asheville, North Carolina—a place where the woods, like the mountains in which they’re nestled, seem to go on forever. Asheville is Sumney’s favorite city in America, and it’s the place where he started work on his debut full-length, Aromanticism, a concept album that investigates an uncomfortable truth: What does it mean to feel loveless in a society that considers romantic love a primary reason for existence? In the rural stillness of the Appalachians, Sumney was able to disconnect from the world and connect with himself, in search of the answer.

“To truly feel solitude, I had to be someplace where there was no phone service, where I couldn’t actually go on my phone or the internet—because it’s not real if you can still talk to people, or if you can still check your notifications,” he says. “The first two days, I was antsy. Then it became liberating, because it’s like, ‘Wow, I can do whatever I want. I don’t have to answer to anyone. I don’t have to talk to anyone.’ I was thinking so much about things I never think about. My mind was activated, and I was going to places mentally that I don’t ever go, because I get distracted before I get there.”

When he wasn’t writing, Sumney spent his time drinking tea and reading—things like bell hooks’s All About Love, essays by Audre Lorde, and Maggie Nelson’s The Argonauts. Eventually, the silence became suffocating; “alone” inevitably collapsed into “lonely.” For Sumney, that was all part of the process. “I’m a fan of acknowledging spectrums, and solitude is a spectrum,” he says. “It’s maddening, and it’s comforting. Being lonely when you’re all alone is very different from being lonely in the city.”

Sumney is used to isolation, though. When he was 10 years old, his family moved to Ghana from his hometown of San Bernardino. In the six years he spent there, Sumney immersed himself in music-making as a way to combat his homesickness. Other than a brief foray in high school choir upon his return to the States, Sumney developed his talents in secret. It was only after he moved to Los Angeles at age 20 that he began going public with his gifts. He began performing around UCLA, where he was a student.

His 2014 debut EP, Mid-City Island, was a five-track experiment that revealed a willingness to let his heart lead his music. The EP’s longest track, “Mumblin’,” is an improvised assortment of lo-fi loops and snaps that crackle under his haunting falsetto. Even on these early recordings, Sumney’s writing shines, full of abstract imagery and emotional candor. 2016’s Lamentations further strengthened that foundation; Sumney’s  vocals and avant-garde song structures became more refined, but not at the cost of his commitment to his specific vision. He shared stages with the likes of James Blake and Sufjan Stevens, and worked with Solange on her acclaimed 2016 album, A Seat at the Table. But even though he’s found support from peers and fans alike, he remains dedicated to using his art to explore his own “lonely world.” To that end, Aromanticism—an album three years in the making—feels like his greatest achievement.

“We have a lot of conversations about identity, gender, and sexuality spectrums, but no one was discussing the romantic spectrum. I felt kind of left out,” he admits. “I had these feelings that had been prominent in my life for a few years, and I started looking them up and came across the word ‘aromanticism.’ I thought it was so interesting and under-explored, yet so relatable.”

Sumney took it upon himself to investigate that notion, interrogating everything from the political to the biblical. As we speak, he mentions that America will probably never have a president who’s single, and is obsessed with the union of man and woman that’s outlined in religious texts. As he started thinking about the ways society prioritizes romantic relationships, he was able to identify the ways it affected him.

But Aromanticism isn’t about disinterest. “It’s admitting that you still desperately crave affection, even if you’re not fully capable of returning it,” Sumney says. On lead single and album standout “Doomed,” Sumney asks, “Am I vital if my heart is idle? Am I doomed?” His icy falsetto thaws ever so slightly as he shifts his concerns from the personal to the theological: “If lovelessness is Godlessness, will you cast me by the wayside?” That dilemma—reflected in a video which depicts bodies suspended in tanks of water, unable to touch—is twofold: desiring what feels out of reach, and a sense of outsiderism that accompanies a life lived alone.

“[Our desire for love] is genetic. It’s innate. It’s social. It’s so many things. But it’s complicated, because there are many of us who feel uncomfortable with other people, or in the presence of other people, and that’s a hard place to be,” Sumney says. “The loneliness that comes with that—apart from it being it innate—is pyscho-social.”

That feeling of “other” extends into this music as well. Sumney says he feels “sonically alienated” in terms of his production style. There’s a constant push or pressure for him to make music that sounds more generic, or is more in the vein of today’s hits. So far, he’s refused. On Aromanticism, his songs bend toward an ethereal sparseness, translating his own inner emptiness into sound. For all their spareness, the songs on Aromanticism have a palpable weight; but the heaviness comes from the lyrics, and Sumney’s savvy use of silence. An early version of “Indulge Me,” which now consists of little more than acoustic guitar and starry synth, featured a piano line that was removed at the last minute. Sumney originally imagined “Doomed” with a horn arrangement, but his quest to embrace minimalism led him to cut it.

“I wanted it to be challenging,” Sumney says. “I only gave in to those moments [to go large] on ‘Quarrel’ and ‘Lonely World,’ because I am kind of a maximalist in a lot of ways.” The album’s creation was similar to the paradox it explores. Sumney primarily wrote in seclusion, but relied on a small group of outside musicians to help bring his vision to life. He logged a series of single-day sessions with collaborators—among them Thundercat, Matthew Otto of Majical Cloudz, Paris Strother of KING, Cam O’bi, and harpist Brandee Younger—before retreating back to the sanctuary of his mind. He says it was the most collaborative he’s ever been, but the final product still feels intensely personal.

“The search for love will be fruitful for many, but there are maybe just as many people it will not be fruitful for,” he continues. “Connecting with people is quite beautiful and meaningful, but I also think recognizing and acknowledging the inability to do that, and recognizing that isolation and loneliness is equally beautiful I think it’s hard to be honest with ourselves about that.”

At a time when displays of love—Black love, especially—are revolutionary, it’s just as revolutionary that an artist would reject the idea of romantic love. In his introductory essay, Sumney calls Aromanticism “process music,” as opposed to protest music. Even as he grapples with these concepts of love and loneliness, his greatest statement lies simply in the fact that he’s here. “The most radical thing that any minority could do is create and exist in a world that implies you shouldn’t,” he says. “I’m just chillin’, doing my thing.”